Tkachiev on Game 6 and blunders in chess

Vlad Tkachiev doesn’t want to dwell on the double blunder that dominated Game 6 of the World Championship match between Magnus Carlsen and Viswanathan Anand. He does, however, want to dwell on the question of how blunders are born in general. In his latest article he recounts the reasons given in a 1928 article on “The Psychology of Chess Mistakes” and adds some more to match the modern age. 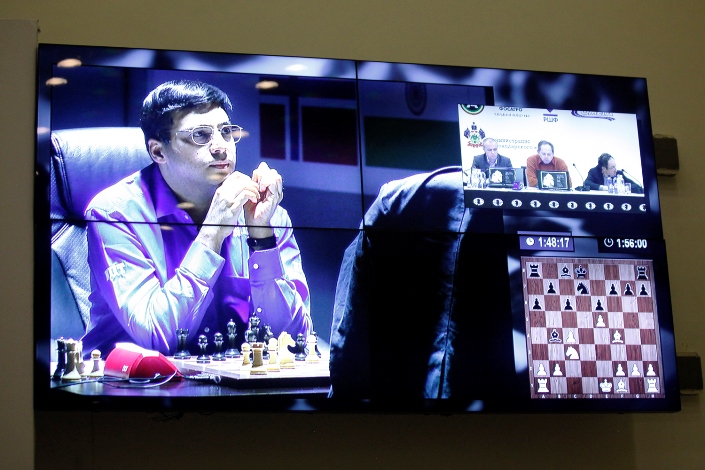 Tkachiev explains Anand's blunder as due to time but also the huge pressure, given "Carlsen’s whole appearance demonstrated irresistible confidence as he quickly made the strongest moves..." | photo: Anastasia Karlovich, FIDE

This is the sixth post in Vlad Tkachiev’s new blog ChEsSay, translated with permission from the Russian original:

Worse than a crime?

(Halfway through the Carlsen-Anand match)

“It was worse than a crime; it was a blunder,” said a confidant of Napoleon’s about the murder on 21 March 1804 of the Duke of Enghien. The essence of that phrase is that what mattered most was not the illegality (not to mention amorality) of what occurred, but that it would dominate the whole subsequent course of events. And nothing would ever be the same again.

Some argue that by not finding 26…Nxe5 in Game 6, with two extra pawns and a -1.45 evaluation, Anand did something similarly irreparable. I don’t, however, think that way myself. By that point Black’s position left a lot to be desired and, had Carlsen chosen the more accurate 26.Kd1, the events would have lost their tragic gleam.

Of course Viswanathan was in a state of shock after that and failed to put up any resistance in the remainder of the game. That wasn’t, however, a blunder in a winning position after a brilliantly played game, but an accidental chance. And that’s how we should treat it. 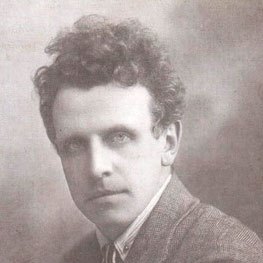 It’s more interesting to get to the bottom of how such one-move blunders occur. After all, we shouldn’t forget that today’s simple tactical blow was missed, one after the other, by two outstanding players. It turns out there’s an article devoted to this one theme, dating from 1928: The Psychology of Chess Mistakes by Alexander Ilyin-Zhenevsky, with the modest subtitle: Material for Future Investigation. Alas, our understanding of the nature of such oversights has progressed little in the intervening period.

So then, the author looks at eight types of mistake he’s familiar with:

…illustrating them with examples from his own games. Besides that, in the English Wikipedia I was interested to learn about the so-called Kotov Syndrome – when a player thinks about a move and then, unable to calculate all the consequences, makes any old move instead. I would include that under blunders due to time pressure – for some reason Ilyin-Zhenevsky makes no mention of that.

To what category can we assign Carlsen’s 26.Kd2? – I think it fits two of those mentioned in the article: “an unexpected check” (on c4) and “the dangers of success” – a role was played by the fact that the evaluation of the position was as clearly better for White. In Anand’s case it could be put down to time pressure – by that point he had around 40 minutes left. But that’s not all.

It seems to me that the mechanisms for committing blunders described by the author require an update, which I’ll try to give:

9.  Mental instability – under the influence of an opponent’s dominance, a worse position or other circumstances (noise in the hall, for example). I’m sure that was also a factor today – Carlsen’s whole appearance demonstrated irresistible confidence as he quickly made the strongest moves. There was no bluff, since his position was objectively much better. It’s no surprise that under the weight of such circumstances Vishy failed to spot the critical moment. And when he did (too late) – it consumed him.

Incidentally, that internal shock can also be provoked by the suspicion that your opponent is cheating – already a 21st-century problem. The first example that comes to mind: the games in the last two years between Morozevich and Topalov. Alexander’s point of view is well-known, as is the score: 0-4, with no draws.

10. Trying to recall computer analysis – that, of course, is something a Soviet chess player couldn’t describe in the early 20th century. From recent games:

Many have noted that sometimes it’s better to know nothing at all than to play “according to a blueprint”. Such is the flip side of being hyper-prepared – it’s incomparably more difficult to recall a computer file in your memory than it is to recall an idea you found on your own.

12. Long moves – these are easy to miss, as Botvinnik noted. It’s also understandable, since the thoughts of a chess player are focused on the area of the board where the main events are taking place. Few are granted the ability to see the whole picture, all of the time:

13. The team situation – if you’ve been to an Olympiad you’ll know what I’m talking about. However, this applies to any important event of a similar character – the tension hangs in the air and gets discharged in absurd moves on the board:

Are you asking why I didn’t include this under “Mental instability”? It’s simply because a bad match situation sometimes requires you to do violence to a position. That can’t, of course, be done with impunity, but that drama has nothing to do with the mental state of the player.

Perhaps I forgot something, but let’s leave the number of reasons for blunders at 13 – fittingly sinister symbolism. And now let’s take a look at a selection of the worst blunders by our two heroes:

So that’s that. Today’s blog didn’t turn out too cheerful. It’s with all the more joy, therefore, that I look forward to the second half of the match. The favourite is Carlsen, since the Paulsen Variation was taken away from Anand today. It wasn’t in vain that Ian Nepomniachtchi hung around in Sochi a few more days. He was just what Magnus was missing: 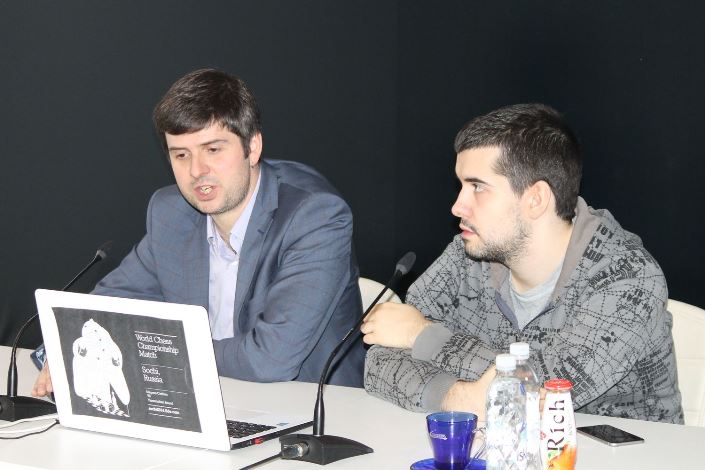 Will Vishy Anand have found a way to counter Carlsen (and Nepomniachtchi's) opening preparation. Find out by watching today's Game 7 live from 13:00 CET here on chess24!