Tkachiev on Carlsen's problems in Sochi 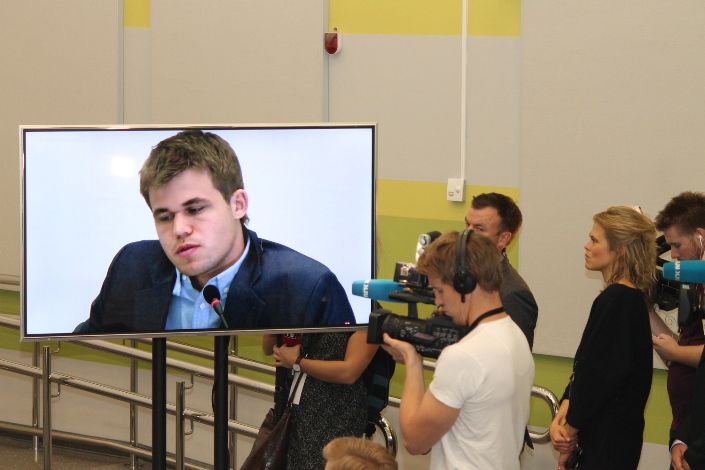 Is Magnus Carlsen in the same position as Garry Kasparov was in the match he lost to Vladimir Kramnik in London in 2000? That’s one of the questions Vlad Tkachiev poses as he reviews the first third of the 2014 World Championship match in Sochi. He sees worrying signs for the reigning champion, and asks how the Norwegian star can counter Viswanathan Anand’s opening preparation.

This is the fifth post in Vlad Tkachiev’s new blog ChEsSay, translated with permission from the Russian original:

(Based on 1/3 of the Carlsen-Anand match)

Flashback no. 1: October-November 2000, the Kasparov-Kramnik match

After encountering a novelty on move 11 of the Grünfeld Defence in Game 2, Kasparov lost and then never returned to the opening — one of his favourites. Work began on repairing his repertoire “on the fly”, as a result of which the World Champion switched to the Queen’s Gambit Accepted and the Nimzo-Indian Defence. Kasparov himself admitted that took up to ten hours a day. As a result, the 10th game (again with Black) ended in a win for Vladimir as, after the 15th game, did the whole match. Afterwards Garry Kimovich explained his loss by his opponent’s domination in opening preparation, achieved thanks to attracting a large number of elite players: besides the official members of Kramnik’s team — Bareev, Lautier, Illescas, others involved were alleged to be Gelfand, Svidler, Morozevich… and more.

Flashback no. 2: September-October 2004, the Kramnik-Leko match

Kramnik, having almost completely switched to 1.e4 from autumn 2003 onwards, began just before the match to alternate that move with 1.d4 and 1.Nf3. In the match, meanwhile, he plays exclusively 1.e4.

Leko plays 1.d4 for the whole match, except the first game. Something he’d almost never done before that.

The result: from a very early stage the match turned into a case of “stumbling in the dark” for both players and their teams. Only in the last game did Vladimir nevertheless manage to level the score. 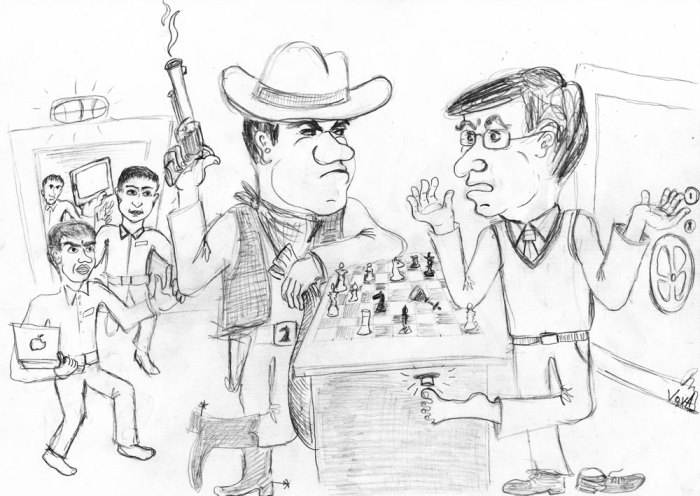 1/3 of the match in Sochi is over and it’s already possible to draw preliminary conclusions. The main one is — openings will be a decisive factor. Or more specifically, whether Magnus Carlsen and his team manage to patch that gaping hole.

None of the remaining factors have represented any surprises. Both players calculate variations at a pretty high level, they handle their time very practically and the Norwegian surpasses his opponent in positional understanding, the playing of simple positions and overall mental attitude. At the same time, on a couple of occasions he made serious tactical mistakes (in advance he failed to see 44.Qh1 in the first game, or 33.Nc6 Nf4+ 34.gxf4 Qg6+ in the fourth). But then we already knew that the Indian is slightly stronger in that area of play. 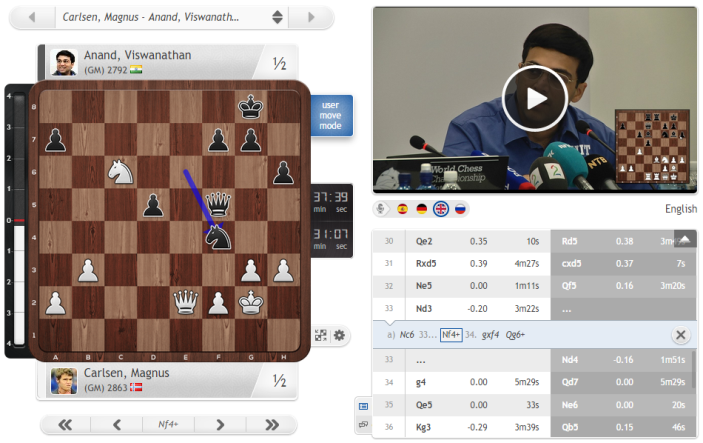 Carlsen admitted he'd missed this trick in the press conference after Game 4. It also provided an amusing moment in the live commentary, since Peter Svidler tried — and understandably failed — to make the move Ne7+!

A surprise — and a big one — was how completely unprepared Carlsen was for the mighty 1.d4 from Anand. How that happened is a story in itself, or perhaps two stories in one.

In an interview with Firstpost not long before the start of the clash with Anand in Sochi, the Indian gave the impression that he might have received some help preparing for the match from none other than world no. 2 Caruana. Whichever way you look at it, Fabiano with White is associated above all with the move 1.e4. That, combined with the fact that Viswanathan himself has almost always started the game with the king’s pawn, could easily have set Magnus’ team off on the wrong track. And although Caruana denied that himself a few days ago…

…the effect had been achieved.


But that’s not all. If you recall the story of Kasparov’s catastrophe in London: back then no small portion of the world chess elite united to prepare against him. Why? — simply because overthrowing the Champion was beneficial to all. And what if the situation has been reproduced 14 years later and the domination of one player above all the rest has triggered a common interest among the world’s top chess players? And based on that they rushed to offload their most cherished opening files on Anand. At the very least it’s a logical supposition, given the somewhat depressed and bewildered look of the World Champion in the last two press conferences. Such things are always felt.

But now details. There’s only been one true surprise in the openings: 2…e6 from Anand in the 4th game. He’s played that extremely rarely of late — three times in six years. In the other games it was easy to guess the opening:

Given the unsuccessful outcome of the opening for the Norwegian in his 2nd game with Black it’s worth considering in more detail what his options now are. Let’s allow ourselves one more lengthy historical digression:

In the last four years after 1.d4 he’s played:

Magnus has always been remarkably quick to adapt things he’s only just seen. I’m sure the most interested spectator of the start of the Tal Memorial Blitz was him. Never mind that it’s blitz — in the situation he’s in anything might help. As it is, of course, you have to ask yourself: what was “Team Carlsen” doing before the match?

It’s bad taste to end an article rhetorically, but it has to be done.

Right on cue, Magnus Carlsen will now have the black pieces in tomorrow's Game 5. It might be a crucial encounter, since Carlsen will then have White in Games 6 and 7. 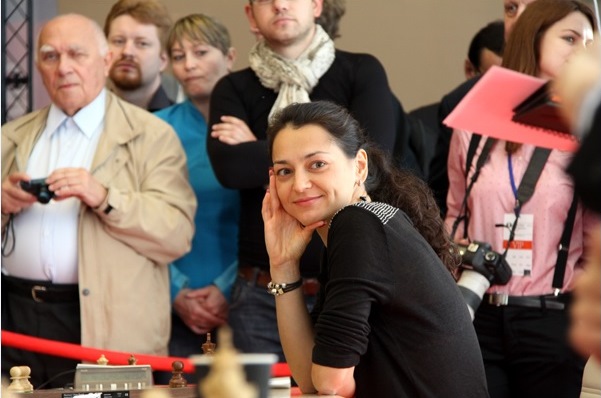 Why not join Magnus in watching the Tal Memorial Blitz! Alexandra Kosteniuk is the only woman in the 12-player field and had a curious first day: 10 losses and 1 win... against Vladimir Kramnik! | photo: ruchess.ru

Don't miss the action here on chess24, with the game starting at 13:00 CET, but the Tal Memorial Blitz starting two hours earlier — it's all available on our Live Broadcast page.