World Champion Magnus Carlsen tops the 128-player field for the most enjoyable and democratic event in the chess calendar when the World Cup starts next Sunday in Tbilisi, Georgia. The huge knockout will see almost a month of non-stop action, with the complete world elite fighting for a $120,000 top prize and two places in the 2018 Candidates Tournament. We preview the action, look at who may win and give you a chance to predict the outcome yourself.

The venue is the Hualing Hotel in the Georgian capital of Tbilisi:

The action will be fast and furious, with 128 players reduced to 64 in 3 days, and finally to one champion in the space of three weeks. The first six rounds are 2-game classical matches, with tiebreaks taking place on the third day if the players are still tied. Those consist of two 25 minute + 10-second increment games then, if necessary, two 10+10 games, then two 5+3 and, if the scores are still tied, Armageddon! White has 5 minutes to Black’s 4, with an increment only from move 61. A draw means Black goes through to the next round. The final is exactly the same except for featuring 4 classical games. It’s the format most chess fans know and love, at least since 2005…

A very brief history of the World Cup

These huge knockouts (100 players until 2000, with top players seeded into Round 2, then 128 afterwards) began their life, controversially, as official World Championships introduced by FIDE President Kirsan Ilyumzhinov in 1998. There was much criticism of the potential randomness of such short knockout matches, but the experiment continued until 2004, with the 1st and 2nd placed players as follows:

Rustam Kasimdzhanov was at the recent Sinquefield Cup as Fabiano Caruana’s second and explained some advantages of the old World Championship system over the current one and also talked about Magnus Carlsen’s decision to play in the event:

In 2005, though, the same 128-player knockouts became biennial World Cups, only qualifying 2 or 3 players for the Candidates stage of the World Championship. Almost all the objections to the event had gone and we could simply enjoy the show. Since then we’ve seen the following finalists:

Some facts about the 128-player field

The 128 players in 2017 were picked by a complicated system of ratings, qualification events, nominees and more, but ensured that we ended up with almost all the top players and a lot of variety. For instance: 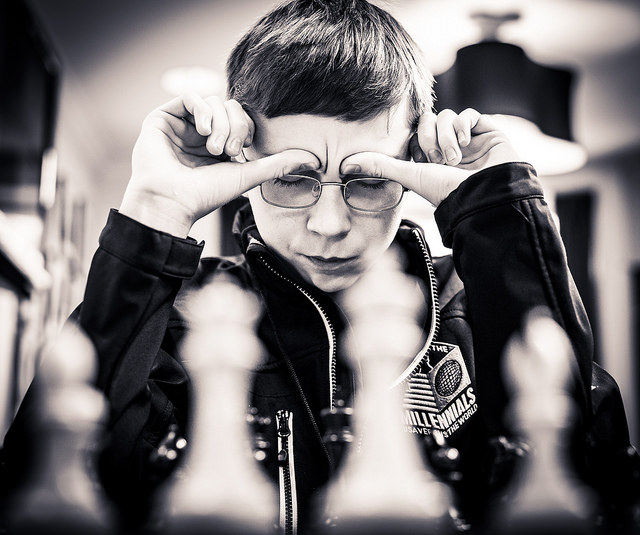 Anton Smirnov at the recent Match of the Millennials in St. Louis, where he took on Xiong and Sevian | photo: Lennart Ootes, St. Louis Chess Club

Most represented nation: Russia has 20 players, over 15% of the field, while the USA and China have 9 each

Most successful player: As we saw in the history above, Vishy Anand has twice topped the knockout stage of similar events, while Ruslan Ponomariov has finished first once (becoming the youngest ever World Champion) and runner-up twice. Peter Svidler has the best record if we strictly take the 128-player World Cup knockouts, winning in 2011 and finishing runner-up in 2015 after leading the final 2:0.

Top female player: Women’s no. 1 Hou Yifan, a FIDE presidential nominee. The only other female player is Nana Dzagnidze, nominated by Georgia, the organising federation.

Lowest rated player: Nigeria’s Oluwafemi Balogun, born in 1987, is at 2255 rated over 100 points lower than anyone else in the event. He qualified on merit by winning a zonal tournament, the West Africa Chess Championship in Monrovia, Liberia. That also gave him the FM title. In Round 1 he faces…

Highest rated player: Of course Magnus Carlsen, at 2822. The World Champion, unlike many of his rivals, had no need to play in the event for qualification purposes, but has long been an advocate of using the knockout system even to determine the World Championship title. He also gets the chance to win an event he’s never won before, with the fact he tops the rating lists in classical, rapid and blitz of course making him the perfect player for this format. If he makes the final it’s likely we’ll have a 3rd place playoff, since the top two finishers in the tournament qualify for the Candidates Tournament that decides Magnus’ next World Championship challenger.

The path to the title

That’s all assuming the seeding favourites win (based on the August 2017 FIDE rating list), of course, when the quarterfinals would be:

The route to the title for the Top 10 seeds would be as follows:

Of course none of those scenarios is likely to happen exactly like that, given the matches are decided over only two games and then speed chess. Which brings us to…

You can let us know in the comments below who you think will win or be the surprise package of the event. If you’re feeling brave, though, you can also try and predict the whole 127-match event!

Simply go to the tournament bracket we've set up at Challonge, click on the "Create a Prediction" button and then make your picks. You can do it purely for fun or, if you submit your prediction before the tournament begins, you’ll get points during the event and we’ll even throw in a prize (either free Premium Membership or perhaps a chess lesson with one of our star players for the winner).

All that’s left is to remind you that the action starts at 15:00 CEST on Sunday 3 September and you can watch it all here on chess24. We expect to have live commentary in at least English and Spanish, though the details aren’t yet finalised.