The Aeroflot Open ends Thursday, with Rauf Mamedov trying to keep ahead of a terrifying bunch of kids. We have more top level women’s chess action when Ju Wenjun and Alexandra Goryachkina meet again in the FIDE Grand Prix in Lausanne, Switzerland, but otherwise it’s still the calm before the Candidates storm. We look at what’s coming up, including some Banter Blitz action as we’re getting down to the money stages. 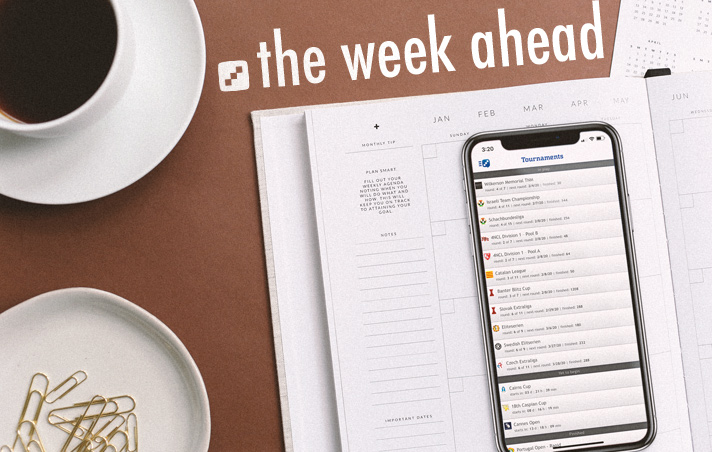 The 2020 Aeroflot Open is drawing to a close, with Rauf Mamedov currently leading on 5.5/7 ahead of eight players just half a point back with two rounds to go:

As in any major open nowadays the rise of a hungry new generation has been a big part of the story. For instance, in Round 1 14-year-old Javokhir Sindarov from Uzbekistan seemed to fall into a tactical trap… but his sting in the tail 26.Ne4! left Rinat Jumabayev with nothing better to do than resign:

13-year-old FM Pranesh M from India beat Boris Savchenko (2573) in 21 moves in Round 2, while the most impressive run by an Indian youngster came from 12-year-old IM Bharath Subramaniyam, who beat the strong grandmasters Mikhail Antipov (2562), Gabriel Sargissian (2689) and Zhou Jianchao (2622) in the first four rounds to join Mamedov in the sole lead. The final move against Sargissian was particularly crunching:

Mamedov finally showed how to deal with the kid in Round 5, but one of the players just half a point behind Rauf is his compatriot Aydin Suleymanli. The 14-year-old is the great new hope of Azerbaijan chess and is currently unbeaten after picking up three big scalps (the game against Ilia Smirin is an enjoyable tactical slugfest): 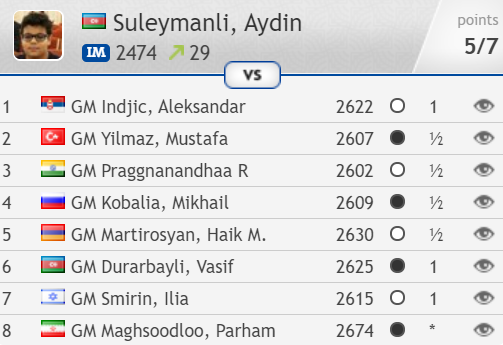 Anything could still happen, however, with Gibraltar Masters winner David Paravyan also in the hunt half a point behind Mamedov.

Another two rounds of the strong 4NCL team competition take place over the weekend (Pool A, Pool B) while the next major international tournament is a women’s event, the Lausanne FIDE Women’s Grand Prix in Lausanne, Switzerland. It’s the third stage of the series and a chance for some of the players to make up ground on leader Humpy Koneru, who doesn’t play (players compete in 3 of the 4 tournaments).

We’re going to see Ju Wenjun and Aleksandra Goryachkina playing each other for the first time since their match, though the tournament has been overshadowed by another development. China’s Zhao Xue has had to withdraw due to issues with travel and the coronavirus, just as Wei Yi withdrew from the Prague Masters. Her replacement is 20-year-old Kazakhstani player Zhansaya Abdumalik, who gets thrown in at the deep end! Her first game on Monday is against Ju Wenjun:

The Banter Blitz Cup is approaching the final stages, with the players through to Round 4, or the Last 16, already guaranteed to win at least $800. Those include Magnus Carlsen and now 4-time Bulgarian Champion and long-time Topalov second Ivan Cheparinov, who defeated Ivan Saric 9:6 in an exciting match on Tuesday.

As always you can watch, or rewatch the live video commentary by the players by clicking on their names:

You can also replay all the games so far with computer analysis here.

Here are some of the shows coming up this week in English (others may be added later):

In case you missed it, Monday 24th February was chess24’s 6th birthday and we had 18 hours of Banter Blitz! You can rewatch all the shows on demand:

A few highlights include… a hugely enjoyable game where Magnus Carlsen’s second Laurent Fressinet felt he had his boss beaten!

Jon Ludvig Hammer was a bit quick with the ban hammer, even if he did ban a known troll...

And Peter Svidler suffered a moment that you can file under “it happens to even the best of us”!

You can keep tabs on everything that’s coming up on our Live shows and events page.