16-year-old Alireza Firouzja replaced Wei Yi to become the surprise highlight of the 2020 Prague International Chess Festival that starts tomorrow after the Chinese star’s travel plans were hit by the coronavirus outbreak. Jan-Krzysztof Duda and David Antón will be among the other young stars fighting for 1st place, while the Cairns Cup ends Sunday. We take a look at all the action coming up this week here on chess24.

The Cairns Cup has been perfectly scheduled to allow a top women’s event to get full media exposure - and you’ll be able to watch as it reaches its culmination on Sunday here on chess24 - but from Wednesday onwards it’s going to have strong competition from events in Prague. The 2nd Prague Chess Festival has once again put together an exciting 2700+ field including many players who aren't elite supertournament regulars. The pairings are out:

The bad news before the start was that for a second year in a row Wei Yi was forced to pull out at the last moment. This time it was down to the effects of the coronavirus, which is also putting Ding Liren and Wang Hao’s participation in the Candidates Tournament in at least some jeopardy. Wei Yi explained:

12 years ago, I went to Pardubice with my friends. It was the first time I traveled abroad. I was happy when I was invited by Petr Boleslav to play at PICF Masters event, it was a great chance to visit the Czech Republic again. Prague is a fantastic city, and the tournament is high-leveled, featuring great players in the world, such as Duda, Vitiugov, Navara, Vidit and Hari. It would have been very challenging for me. But then the sudden coronavirus happened in China, and as the situation became worse and worse, it was impossible to make this journey. It is a pity, but I still look forward to playing in Prague. Perhaps next year. It's hard to predict who will win this tournament because all of them are very strong, but personally I prefer David because he was my teammate and helped us to win the 2014 Chinese League.

How do you lessen the blow of losing the world’s top junior? By inviting the man of the moment and the world’s most exciting junior – 16-year-old Alireza Firouzja! The young Iranian took silver last month in the World Rapid Championship, came close to beating Magnus in the blitz and then began the Tata Steel Masters like a man possessed, racing into the sole lead on +3 despite a loss to Wesley So. He was eventually brought back down to earth by the combined efforts of Magnus Carlsen, Fabiano Caruana and Vishy Anand, but even those three losses were interesting games rather than a case of Alireza simply having been “found out” at the highest level.

The competition in Prague will be very serious, however. 21-year-old Jan-Krzysztof Duda is the top seed, the hugely experienced Nikita Vitiugov will be hoping to bounce back after a disappointing Wijk aan Zee and you could make a case for any of the other players winning if they enter in peak form. 24-year-old Spanish GM David Antón, for instance, will be looking to continue the play that saw him win the Tata Steel Challengers in Wijk.

The structure of the events in Prague is in fact very similar to Wijk aan Zee, with a parallel Challengers tournament and even a “futures” event to give young Czech players the greatest opportunity. The top seed in the Challengers is 24-year-old Azerbaijan player Nijat Abasov, though 20-year-old Jorden van Foreest and 17-year-old Andrey Esipenko go into the event after brilliant displays in Wijk aan Zee and Gibraltar last month.

Another tournament that’s been worth watching is the Indian Team Championship in Ahmedabad. Adhiban’s Petroleum SPB are on course to win, but it hasn’t always been easy – in Round 3 he forfeited his game against Krishna CRG in 9 moves when it was pointed out he was wearing a watch. Even though it was an analog watch and of absolutely no help to his chess the rules were clear that all watches of any kind were banned!

Adhiban shrugged that off, however, and has so far recovered all the rating points lost: 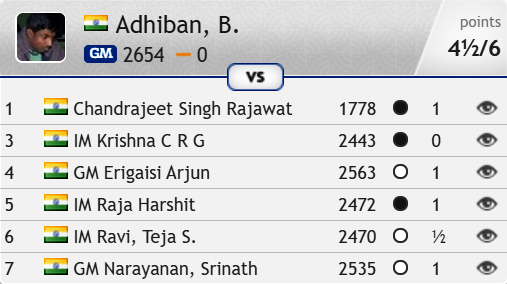 His Round 5 game against Raja Harshit featured a wonderful move:

16…Rxg2+!! After 17.Kxg2 the black knight jumped from g6 to f4 and the multiple threats were just too much for White to handle, with the game ending in checkmate on move 42.

The Banter Blitz Cup schedule is light this week (Robson vs. Gozzoli has had to be cancelled at the last moment), so you might want to catch up on some of the recent matches you’ve missed:

And yes – you read that correctly! Gata Kamsky and Cristobal Henriquez are set to play a rematch, though not for a place in Round 4, after the dramatic early finish of their previous match. We’ll have more details later. 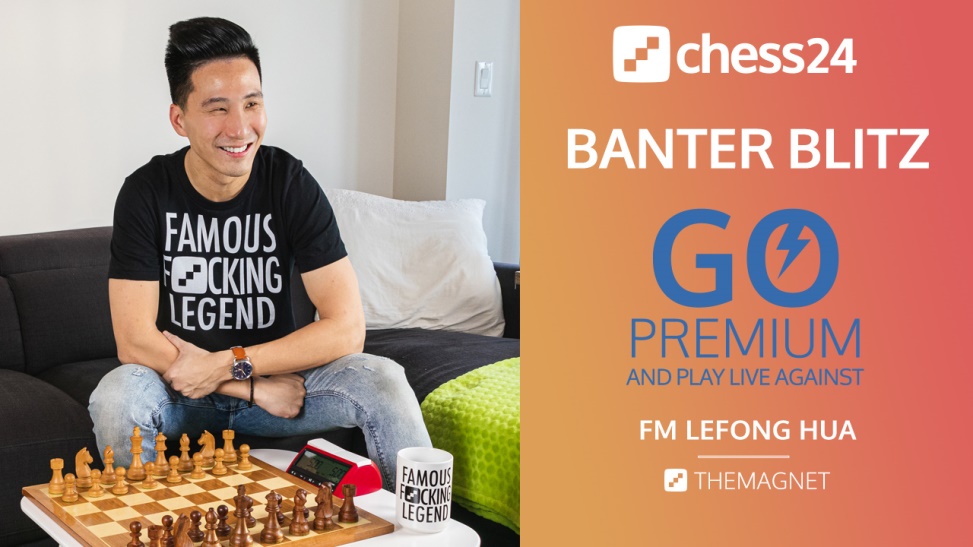 Here are some of the shows that are taking place in the coming week:

Of course there are also shows in German and Spanish and you can keep track of everything on the Live Shows and Events page.