The Candidates: Wesley So

The 2018 Candidates Tournament will be played in Berlin from 10-28 March. The winner will get a chance to fight for the World Championship title against Magnus Carlsen this November in London. We take a look at each candidate, analyzing his previous participation in similar events and his performance during 2017 and 2018. Let's take a look at the youngest player in the field, Wesley So.

Wesley So is currently the 4th best rated player in the world with a 2799 rating. He qualified for the 2018 Candidates thanks to his rating average in the 12 official lists of 2017. This will be his first participation in this event, but let's review some of his most important achievements in recent years:

In the eighth edition of the Bilbao Chess Masters, played in October 2015, So took first place after defeating Anish Giri in a playoff. It's worth mentioning that the other debutant at this year's Candidates, Ding Liren, was amongst the participants in that event.

Wesley's jump to the top of the elite came thanks to an excellent series of results in the second half of 2016, when he took first place in the last two events of the Grand Chess Tour, the Sinquefield Cup and the London Chess Classic. These results, naturally, allowed him to take the first prize in what has become the most demanding series of tournaments on the circuit (in addition to $295,000, accumulated throughout the year).


The finishing touch was his victory at the 2017 Tata Steel Masters, where he finished first with a convincing 9/13, leaving Magnus Carlsen relegated to second place. At that point in time it was declared that the American might be, in practice, the best player in the world.

Here we present all of Wesley So's results in classical tournaments in 2017 and 2018:

So began 2017 in fine form, with victories at the Tata Steel Masters and the U.S. Championship - he defeated Alexander Onischuk in the tiebreaks, in addition to a good second place at the Gashimov Memorial.

The surprise of the year - for a player known for his great stability - was his performance at the Sinquefield Cup, where we saw him fall repeatedly and inexplicably. After that, however, the American demonstrated his class once again in London and Wijk aan Zee, where he obtained more than respectable results (in London he finished unbeaten and in Wijk aan Zee he only lost one game).


The tiebreak criteria in the Candidates are: 1) Direct matches, 2) Number of wins, 3) Sonneborn-Berger. Only in the extraordinary case that these three do not break the tie will they proceed to play rapid and blitz games. In any case, given the growing relevance of these time controls at the elite level, let's take a look at Wesley So's rapid and blitz games from last year:

Wesley has stated more than once that he feels more comfortable playing classical chess, but that does not mean he can't show sporadic good results at accelerated time controls. In 2017, he won the rapid section of the Leuven Grand Chess Tour event (ahead of Carlsen) and beat the blitz specialist Leinier Dominguez at the St. Louis Champions Showdown.

Finally, let's see the evolution of So's rating over the last 14 months: 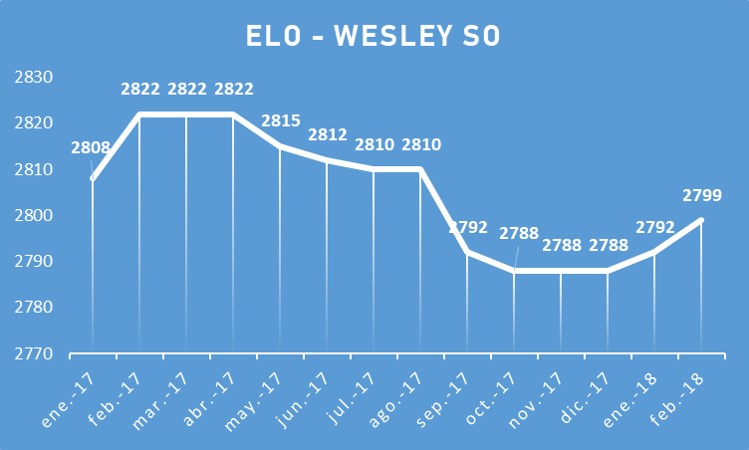