The 2018 Candidates Tournament will be played in Berlin from 10-28 March. The winner will get a chance to fight for the World Championship title against Magnus Carlsen this November in London. We take a look at each candidate, analyzing his previous participations in similar events and his performance during 2017 and 2018. Let's take a look at the profile of former World Champion Vladimir Kramnik.

Kramnik is currently the 3rd best rated player in the world, with a 2800 rating. The Russian has been participating in World Champioship cycles of all kinds since 1994. In fact, since the unification of the world title Kramnik has been part of either the Candidates or the World Championship of all cycles, except the last one. He will be the organizers' nominee at the 2018 edition:

The chess world was split in two in 1993. Kramnik - then the greatest promise of Russian chess - participated in both cycles in 1994. In the PCA Candidates, he lost against Gata Kamsky in the quarterfinals, while in the FIDE cycle he was defeated by Boris Gelfand in the semifinals.

In 1998, he played a match against Shirov to decide who would be Garry Kasparov's World Championship challenger. The Latvian (who represented Spain at the time) won the match, but, in the absence of sponsors, Kasparov decided that he would play the match against Kramnik. "Big Vlad" won the famous London match in 2000, largely due to his excellent opening preparation.

Kramnik defended his title against Peter Leko in 2004 (the match was tied and the defending champion kept his crown), and defeated Veselin Topalov in the rapid tiebreaks of the controversial 2006 match in Elista. At the 2007 World Championship tournament in Mexico, Vladimir finished second behind Vishy Anand. The Russian used his right to a rematch and faced Anand at the 2008 World Championship match in Bonn — the Indian defended his title with a 6.5:4.5 victory.

In the Candidates matches of Kazan 2011, Kramnik was eliminated by Alexander Grischuk in the semifinals, after having qualified by rating.

Kramnik qualified for the 2013 London Candidates, once again, thanks to his rating. In the tournament, he finished tied in first place with Magnus Carlsen. The latter got the right to play the World Championship due to his superior score in the second tiebreaker criteria - highest number of wins.

In Khanty-Mansiysk 2014, Kramnik finished third with 7/14 points. He got three wins and three losses.

Finally, in the 2016 cycle, Kramnik was overtaken by Anish Giri in the fight to get the Candidates' place reserved for the second best rated player. The Russian was not nominated by the organizers despite the fact that the event was played in Moscow.

Here we present all Kramnik's results in classical tournaments in 2017 and 2018:

Vladimir Kramnik did not participate in the FIDE Grand Prix nor was he one of the regular players at the 2017 Grand Chess Tour (he was one of the wildcards in Leuven), despite having been invited by the organizers in both cases. The Russian did not get any titles at the closed elite events, but, in general, finished near the top of the standings in all of them. His second places at the Gashimov Memorial and Altibox Norway Chess stand out.

His triumphs came in team events, as he led Siberia and Globus to first places in the Russian Team Championship and the European Club Cup, respectively.

In his last event, he finished third at the Tata Steel Masters, where he defeated Caruana and lost against Karjakin (his last decisive games against other Candidates).

The tiebreak criteria in the Candidates are: 1) Direct matches, 2) Number of wins, 3) Sonneborn-Berger. Only in the extraordinary case that these three do not break the tie will they proceed to play rapid and blitz games. In any case, given the growing relevance of these time controls at the elite level, let's take a look at Kramnik's rapid and blitz results from the last year:

Big Vlad was not very active in tournaments with faster time controls. Besides the preliminary blitz tournaments in Zurich and Stavanger, he only played in the Leuven stage of the Grand Chess Tour. In all these events he finished close to the middle of the standings.


Finally, let's see the evolution of Kramnik's rating over the last 14 months: 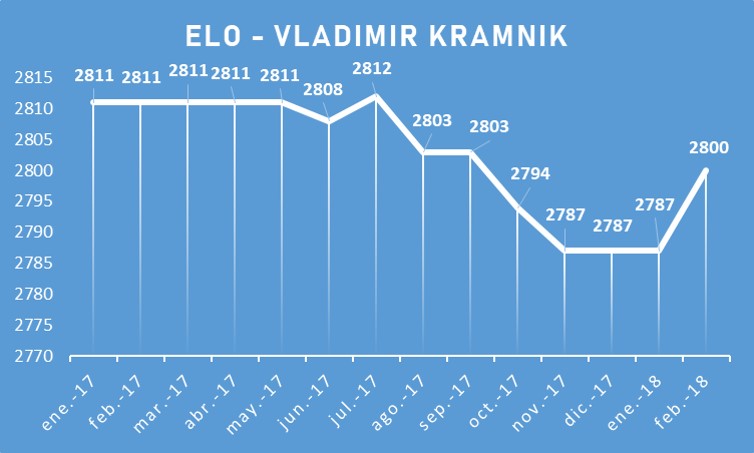 Kramnik will be hoping for a fast start when he has White in three of his first four games, especially as he then faces Black in four of the next five! 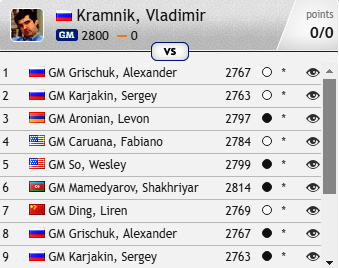 Check out the full pairings below: