The 2018 Candidates Tournament will be played in Berlin from 10-28 March. The winner will get a chance to fight for the World Championship title against Magnus Carlsen this November in London. We take a look at each candidate, analyzing his previous participations in similar events and his performance during 2017 and 2018. Let's end the series with the profile of the current world number 2, Shakhriyar Mamedyarov.

Mamedyarov is currently the 2nd best rated player in the world, with a 2814 rating. The Azeri qualified for the Berlin Candidates by virtue of finishing first in the 2017 FIDE Grand Prix. This will be his third participation in a Candidates tournament — the second one with this format:

In the cycle that culminated with the 2012 World Championship, the Candidates were set to take place in Baku, however, given the fact that Levon Aronian announced that he would not play in Azerbaijan (due to political problems between Armenia and that country), the venue was moved to Kazan. Originally Mamedyarov had been nominated by the Azeri organizers, and that decision remained despite the tournament not being held in Azerbaijan. In the event, Shak was defeated by Boris Gelfand by a 2.5:1.5 score in their first round match.

As in the current cycle, Mamedyarov qualified for the 2014 Khanty-Mansiysk Candidates through the FIDE Grand Prix — he finished that edition in second place. In the double round-robin, Shakhriyar got three wins and three losses, and shared third place with Kramnik and Andreikin.

Here we present all Mamedyarov's results in classical tournaments in 2017 and 2018:

Mamedyarov had an excellent 2017. His first place in the general standings of the FIDE Grand Prix came thanks to three good performances in Sharjah, Moscow and Geneva. His most celebrated triumph, however, came at the Gashimov Memorial in Shamkir, where he defended his 2016 title with a clear first place ahead of fellow Candidates Kramnik, So and Karjakin.

It is worth adding his performances at the Russian Team Championship and the European Club Cup, where he accumulated 8/9 points to take gold medals with Siberia and Globus, respectively (in both cases he played on the second board, behind Kramnik).

His regularity in elite tournaments resulted in a significant rating gain. Mamedyarov climbed from 13th place in the world rankings in January 2017 (with 2766) to clear 2nd place in February 2018 (with 2814).

The tiebreak criteria in the Candidates are: 1) Direct matches, 2) Number of wins, 3) Sonneborn-Berger. Only in the extraordinary case that these three do not break the tie will they proceed to play rapid and blitz games. In any case, given the growing relevance of these time controls at the elite level, let's take a look at Mamedyarov's rapid and blitz results from the last year:

Shak's results at tournaments with faster time controls are not particularly remarkable. However, in the rapid section of the IMSA Mind Games, he shared first place with Le Quang Liem and Dmitry Andreikin (the latter took home the trophy on tiebreaks).

Finally, let's see the evolution of Mamedyarov's rating over the last 14 months: 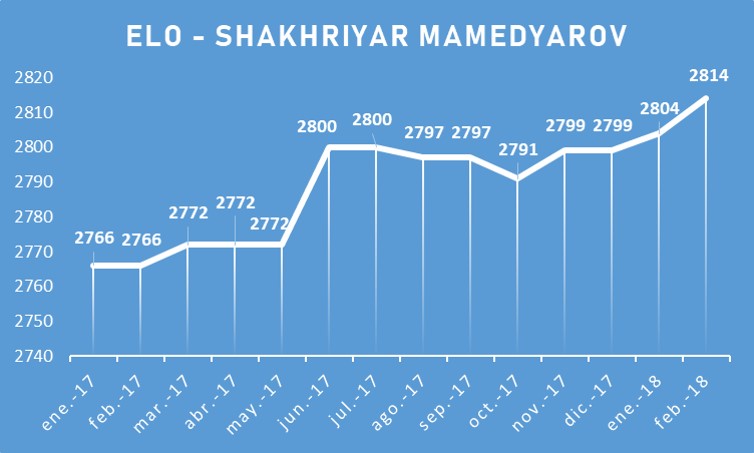