The 2018 Candidates Tournament will be played in Berlin on 10-28 March. The winner will get a chance to fight for the World Championship title against Magnus Carlsen this November in London. We take a look at each candidate, analyzing his previous participations in similar events and his performance during 2017 and 2018. Let's start with the last challenger, Sergey Karjakin.

The Russian is currently the 13th best rated player in the world, with a 2763 rating. Sergey qualified to the Candidates by virtue of being the latest challenger of Magnus Carlsen in the 2016 World Championship. He had two very good participations in past editions:

In Khanty-Mansiysk 2014, Karjakin finished in second place despite having qualified only after Vladimir Kramnik's victory in the 2013 World Cup. Karjakin had 3 wins and 2 losses. His most memorable game was his victory with Black over Svidler in the eighth round.

In Moscow 2016, meanwhile, Sergey earned the nickname "Minister of Defence", since he held inferior positions more than once. In an exciting finale, Karjakin beat Caruana and finished the event on 8.5/14, which allowed him to face Carlsen in New York.

Here we present all Sergey Karjakin's results in classical tournaments in 2017 and 2018:

As we can see, Karjakin had a regular year, finishing more or less in the middle of the standings in most competitions. The exceptions are the London Chess Classic and Altibox Norway Chess, where he had disappointing results.

Despite being known for his great performances in previous World Cups, Karjakin was eliminated in the second round of the 2017 edition. On the other hand, he was part of Globus, the team that took gold in the last European Club Cup.

The tiebreak criteria in the Candidates are: 1) Direct matches, 2) Number of wins, 3) Sonneborn-Berger. Only in the extraordinary case that these three do not break the tie will they proceed to play rapid and blitz games. In any case, given the growing relevance of these time controls at the elite level, let's take a look at Sergey Karjakin's rapid and blitz results from last year:

Karjakin's best achievements, evidently, came at faster time controls. Noteworthy are his victory in the blitz portion of the St. Louis Rapid and Blitz Tournament, and his second place at the Riyadh World Blitz Championship.

Finally, let's see the evolution of Karjakin's rating over the last 14 months: 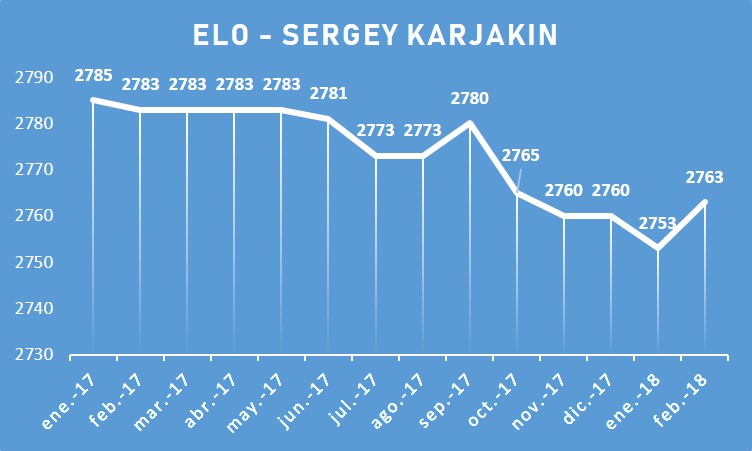