The 2018 Candidates Tournament will be played in Berlin on 10-28 March. The winner will get a chance to fight for the World Championship title against Magnus Carlsen this November in London. We take a look at each candidate, analyzing his previous participations in similar events and his performance during 2017 and 2018. Let's see the profile of the last World Cup winner, Levon Aronian.

Aronian is currently the 5th best rated player in the world with a 2797 rating. He qualified for the Candidates Tournament after winning the World Cup in Tbilisi — for a record second time. The Armenian is the only contender who has played in each of the last five editions of the Candidates:

In Elista 2007, Aronian qualified to the Mexico World Championship tournament after eliminating Magnus Carlsen (in blitz tiebreakers) and Alexei Shirov. At the double round-robin in Mexico City, the Armenian got two wins and three losses to end with a 6/14 score.

After easily winning the 2008-2010 FIDE Grand Prix, Levon played the Kazan Candidates Tournament, where he was eliminated by Alexander Grischuk in the last game of the rapid tiebreaks.

In London 2013, he arrived as one of the favorites - with Carlsen and Kramnik - and finished the first half of the tournament as leader after accumulating three victories. However, his three losses in the second half left him half a point behind the eventual winners.

The 2014 Candidates was played in Khanty-Mansiysk. Aronian qualified by rating and finished the tournament with three wins and four losses, which left him in shared sixth place with 6.5/14 points.

In the 2014-2016 World Championship cycle he did not manage to qualify for the Candidates either by rating or through the World Cup, but was eventually the wildcard nominated by the organizers (against the odds, as everybody thought a Russian would be invited to the event in Moscow). Levon won two and lost two in the Russian capital.

Here we present all Aronian's results in classical tournaments in 2017 and 2018:

Aronian is the only Candidate who has participated in both the FIDE Grand Prix and the Grand Chess Tour, so he had a particularly full schedule in 2017. According to many, the Armenian was "the player of the year". In addition to his impressive second victory in a World Cup, his consecutive wins at the GRENKE Chess Classic and Altibox Norway Chess stand out; the latter was one of the strongest tournaments in history — Aronian beat Karjakin, Kramnik and Carlsen. Besides these achievements, he finished shared first in the last stage of the Grand Prix, where Jakovenko took the trophy on tiebreaks.

Levon also started 2018 on the right foot. He won the strong Tradewise Gibraltar Open, after beating Maxime Vachier-Lagrave in the final tiebreaks round (the Armenian had also dramatically eliminated the Frenchman in the Tbilisi World Cup semifinals).

The tiebreak criteria in the Candidates are: 1) Direct matches, 2) Number of wins, 3) Sonneborn-Berger. Only in the extraordinary case that these three do not break the tie will they proceed to play rapid and blitz games. In any case, given the growing relevance of these time controls at the elite level, let's take a look at Aronian's rapid and blitz results from the last year:

Aronian had a good year in tournaments with faster time controls, finishing first and second, respectively, at the rapid and blitz sections of the St. Louis Rapid and Blitz Grand Chess Tour event.

Finally, let's see the evolution of Aronian's rating in the last 14 months: 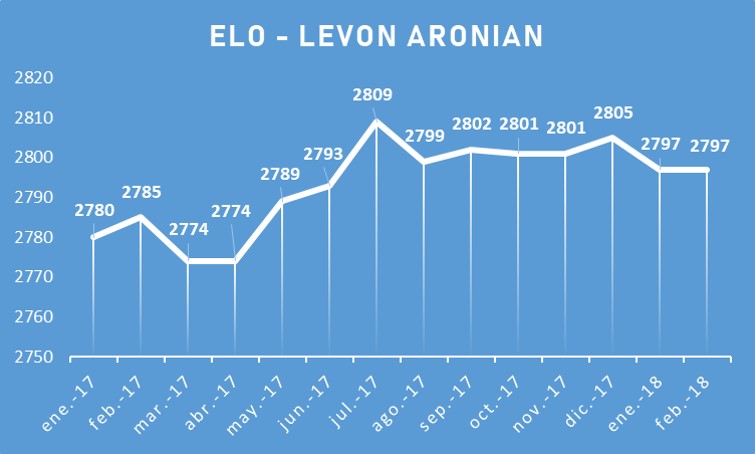