The 2018 Candidates Tournament will be played in Berlin from 10-28 March. The winner will get a chance to fight for the World Championship title against Magnus Carlsen this November in London. We take a look at each candidate, analyzing his previous participations in similar events and his performance during 2017 and 2018. Let's see the profile of the player with the third highest ever live rating, Fabiano Caruana.

The American is currently the 7th best rated player in the world with a 2784 rating. He qualified for the 2018 Candidates by virtue of his rating average throughout the 12 official lists of 2017. This will be his second Candidates — in his first appearance, he came very close to victory:

He qualified for the previous Candidates by getting first place in the general standings of the 2014-15 FIDE Grand Prix. In that series, Fabiano shared first place at the events in Baku and Khanty-Mansiysk. In Moscow, the American beat Anand and Nakamura with White, which allowed him to reach the last round sharing first place with his final day rival, Sergey Karjakin. The Russian won the game and got the right to challenge Carlsen.

Fabiano's greatest achievement, without a doubt, was his victory in the 2014 Sinquefield Cup. His 8.5/10 was enough to reach the best rating performance in a single tournament in history, surpassing Carlsen's performance in Nanjing 2009 and Karpov's in Linares 1994. This historic achievement - which included a run of seven consecutive wins - propelled his live rating to 2851, a number surpassed only by Carlsen and Kasparov.

Here we present all Caruana's results in classical tournaments in 2017 and 2018:

During 2017 Caruana dropped some rating points, but without having major downturns — with the possible exception of his seventh place in the Sinquefield Cup. His performance in elite tournaments kept him within the world's Top 5 players throughout 2017. His fall to 7th place was prompted by a disappointing result at the last Tata Steel Masters, although it remains to be seen whether this happened due to some "preparation hiding" for the Candidates.


In any case, Fabiano ended the year on a high. In the last stage of the Grand Chess Tour in London, the American defeated Ian Nepomniachtchi in tiebreaks to take first place. It is worth adding that three of his soon-to-be rivals in Berlin - Wesley So, Levon Aronian and Sergey Karjakin - participated, as well as World Champion Magnus Carlsen.

The tiebreak criteria in the Candidates are: 1) Direct matches, 2) Number of wins, 3) Sonneborn-Berger. Only in the extraordinary case that these three do not break the tie will they proceed to play rapid and blitz games. In any case, given the growing relevance of these time controls at the elite level, let's see Caruana's rapid and blitz results from last year:

Fabiano Caruana has never been known for his skills at faster time controls. However, in recent years he's produced a few surprises in events of this type. In 2017, Fabi finished shared second both at the St. Louis Rapid Tournament and at the blitz section of the Paris Grand Chess Tour event. In addition, he beat three-time blitz World Champion Alexander Grischuk at the St. Louis Champions Showdown, an event that combined different time controls, all without increments.

Finally, let's see the evolution of Caruana's rating in the last 14 months: 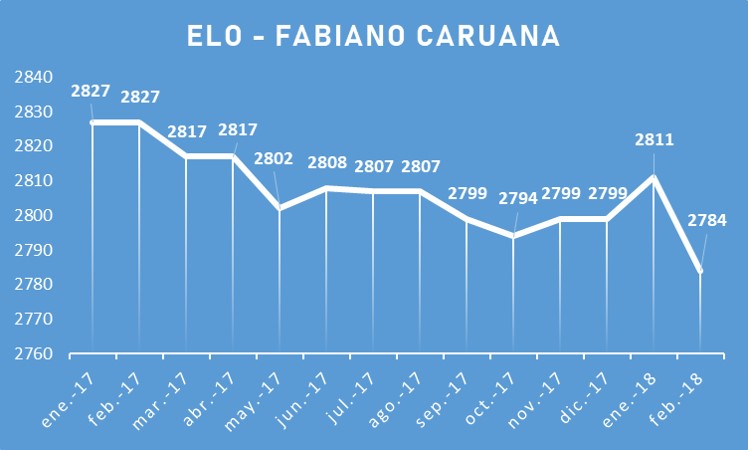