The 2018 Candidates Tournament will be played in Berlin from 10-28 March. The winner will get a chance to fight for the World Championship title against Magnus Carlsen this November in London. We take a look at each candidate, analyzing his previous participations in similar events and his performance during 2017 and 2018. Let's continue with the first Chinese player to ever participate in a Candidates, Ding Liren.

Ding Liren is currently the 11th best rated player in the world with a 2769 rating. The Chinese player qualified for the Candidates Tournament thanks to his second place in the 2017 World Cup in Tbilisi, Georgia. In the semifinals he eliminated Wesley So, who qualified for the Candidates by rating anyway. Like So, Ding Liren will have his debut in Berlin. Let's see the highlights of the 25-year-old's career:

Ding Liren's rise to the elite took place rather quietly. Besides his three Chinese National Championships, his performance in first-class tournaments does not include many particularly memorable moments - except, of course, the event that qualified him for the Candidates: his second place at the 2017 World Cup.

Ding Liren had two consecutive second places in the 2015 and 2016 editions of the Tata Steel Masters, finishing, respectively, one point and half a point behind the winner — Magnus Carlsen both times. The fact that he hasn't played in Wijk aan Zee for the last two years could be attributed, at least partially, to the rising popularity of his young compatriot Wei Yi.


In 2017, however, Ding Liren got two first places in individual tournaments: at the Shenzhen Masters, ahead of Svidler and Giri, and at the Moscow FIDE Grand Prix, where fellow Candidates Mamedyarov and Grischuk also participated.

Here we present all Ding Liren's results in classical tournaments in 2017 and 2018:

This has been, without a doubt, a good year for China's number 1, justifying his place at the Candidates. Since it is difficult to have very high expectations for the World Cup - one of the trickiest tournaments to win - the Chinese player focused his efforts on the FIDE Grand Prix, where he obtained good results.

Another stand-out, of course, was his victory at the Shenzhen Masters, his performance as the first board of Alkaloid at the European Club Cup (the team finished in second place) and his leading role at the Khanty-Mansiysk World Team Championship, where China got gold.

The tiebreak criteria in the Candidates are: 1) Direct matches, 2) Number of wins, 3) Sonneborn-Berger. Only in the extraordinary case that these three do not break the tie will they proceed to play rapid and blitz games. In any case, given the growing relevance of these time controls at the elite level, let's see Ding Liren's results in rapid and blitz for the last year:

Ding Liren has previously reached first place in the blitz world ranking. In 2017, however, the Chinese player competed in only a few events with accelerated time controls. His participation at the Rapid and Blitz World Championships in Riyadh stands out, where he finished towards the top of the standings in both events. On the other hand, he was overwhelmingly defeated by Magnus Carlsen at the St. Louis Champions Showdown.

Finally, let's see the evolution of Ding Liren's rating over the last 14 months: 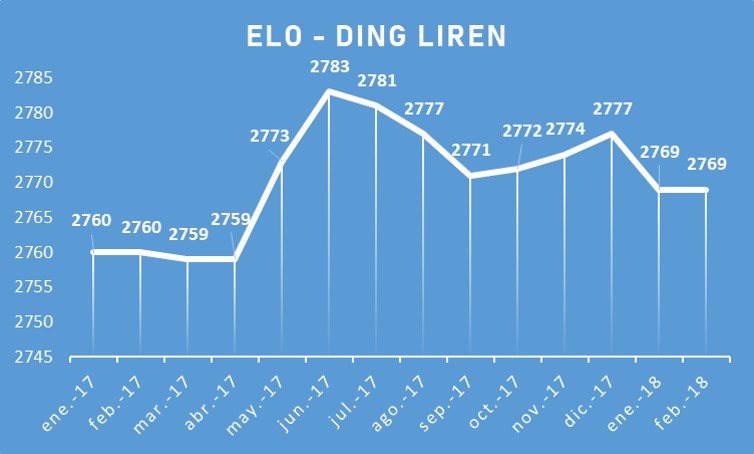