The 2018 Candidates Tournament will be played in Berlin from 10-28 March. The winner will get a chance to fight for the World Championship title against Magnus Carlsen this November in London. We take a look at each candidate, analyzing his previous participations in similar events and his performance during 2017 and 2018. Let's continue with the profile of the always dangerous Alexander Grischuk.

Grischuk is currently the 12th best rated player in the world with a 2767 rating. He qualified to the Candidates Tournament after finishing second in the FIDE Grand Prix, where he did not lose a single game (out of 27). This will be his fourth Candidates — two of his three previous appearances were played using the knockout format:

In Elista 2007, Grischuk defeated his compatriots Vladmir Malakhov and Sergei Rublevsky to get one of the four places at the 2007 World Championship tournament, a double round-robin with eight players that took place in Mexico City. The Russian finished last after losing 5 out of the 7 games he played with the black pieces (he beat Gelfand and Morozevich with White).

In 2011, Grischuk lost the last game of the Candidates final against Boris Gelfand in Kazan, after eliminating Levon Aronian and Vladimir Kramnik in previous stages. The Russian had entered the tournament as a replacement for Magnus Carlsen, who decided not to participate after describing the selection process as not sufficiently modern and fair.

At the London 2013 Candidates, Alexander finished fifth. His 6.5/14 included a victory over Ivanchuk and losses against Carlsen and Kramnik. The Russian had gotten his place in that event by finishing second at the 2011 World Cup (Peter Svidler defeated him in the final match).

Here we present all Grischuk's results in classical tournaments in 2017 and 2018:

In classical chess, besides a match against Yu Yangyi in China and the Tbilisi World Cup, Alexander Grischuk has only participated in team events and the FIDE Grand Prix. In all these events, the Russian has played 70 games and has only fallen once — at the European Team Championship against Mamedyarov. This allowed him to maintain a high position in the world rankings.

His solid performance at the Grand Prix has shown that he continues to play on equal terms against elite rivals - such as Aronian, Mamedyarov, Vachier-Lagrave and Giri, among others, and his good performances at the Russian Team Championship and the Chinese League show us that he can defeat rivals with somewhat lower ratings.

The tiebreak criteria in the Candidates are: 1) Direct matches, 2) Number of wins, 3) Sonneborn-Berger. Only in the extraordinary case that these three do not break the tie will they proceed to play rapid and blitz games. In any case, given the growing relevance of these time controls at the elite level, let's see Grischuk's results in rapid and blitz from the last year:

Grischuk won the World Blitz Championship three times, and has stated more than once that he favors faster time controls in elite chess. This past year, his best results came at the rapid section of the Paris Grand Chess Tour event and at the IMSA Mind Games in China, where he shared first place with his compatriot Vladislav Artemiev (the younger Russian took gold on tiebreaks).

Finally, let's see the evolution of Grischuk's rating in the last 14 months: 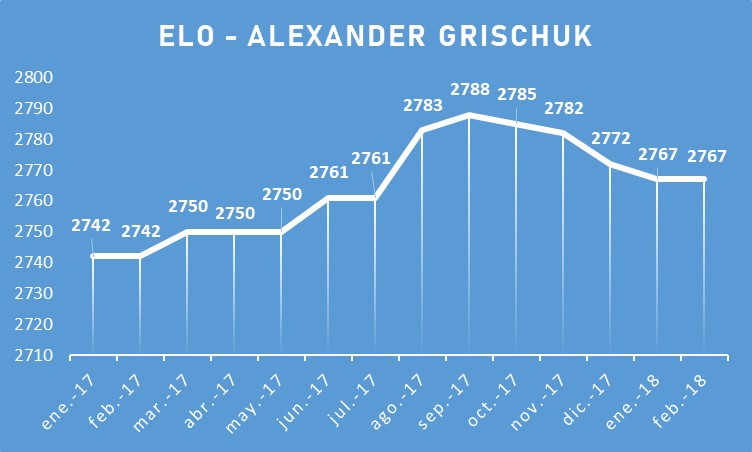