So 2015 is over! After twelve months full of emotion, joy, regret and, of course, good chess, our Spanish editor David Martínez takes a light-hearted look back, nominating the people, events and moments which, in his opinion, stood out in the chess world in 2015. Would you make the same choices?

The game of the year

Wei Yi's stunning victory over Lázaro Bruzón in the Danzhou supertournament is hard to beat. Grandmaster Jan Gustafsson explains why it was so impressive in a YouTube video that was by far the most popular produced by chess24 in 2015 — it should perhaps be noted that the title "Game of the Century" was a comparison to 13-year-old Bobby Fischer's win over Donald Byrne and not merely an attempt to infuriate some viewers

Other great games included Carlsen's win over Fabiano Caruana in the Tata Steel Masters at the start of the year...

...and his demolition of Li Chao in the Qatar Masters at the end:

The move of the year

Of course a whole year sees a lot of great moves, but after much thought we've chosen — for its subtlety and depth — the brilliant 44.Kg1!! played by Denis Khismatullin against Pavel Eljanov in the European Championship in March. We already asked back then if it would be the move of the year, and for once that was no exaggeration!

The player of the year

There were some doubts as it wasn't his best year, but after Magnus Carlsen won the Grand Chess Tour with victory in London, defended his World Rapid Championship title, won in Qatar and ended the year as the no. 1 in classical, rapid and blitz chess it's hard to make a case for anyone else winning this category.

Magnus Carlsen has played a lot (thanks, Magnus!) and is over 40 points clear of his nearest rivals. For how many more years will he continue to dominate world chess?

The female player of the year

Athough objectively Hou Yifan is still the world's best female player, the award goes to Mariya Muzychuk, who in 2015 not only became World Champion after an impressive knockout performance but is now among the world's top three women players — all at the age of only 23. 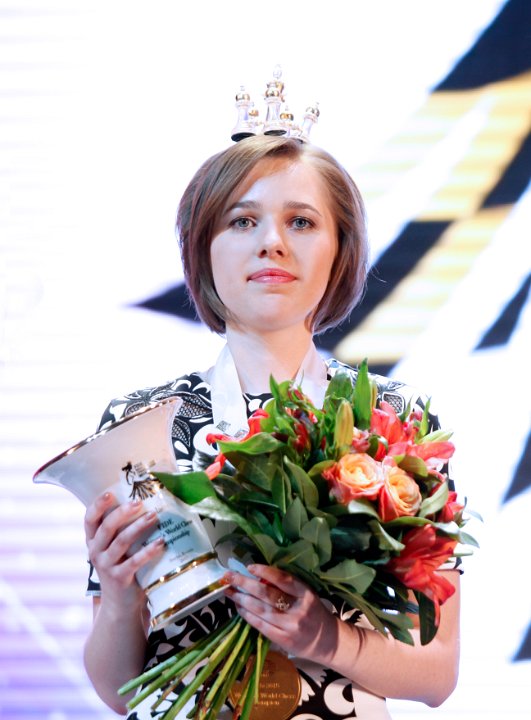 The year's most surprising moments

In 2015 we also witnessed some completely unexpected moments! Since we were unable to choose between them here are three that left us speechless:

1. This one happened in the ninth round of the US Championship. The Chief Arbiter decided to forfeit one of the event's star players, Wesley So, for writing notes to himself during a game that lasted only six moves. You can find all the details and reaction at the time in this article, while our Spanish coverage of the tournament caught the event on video...

...and Lennart Ootes immortalised it in a photograph: 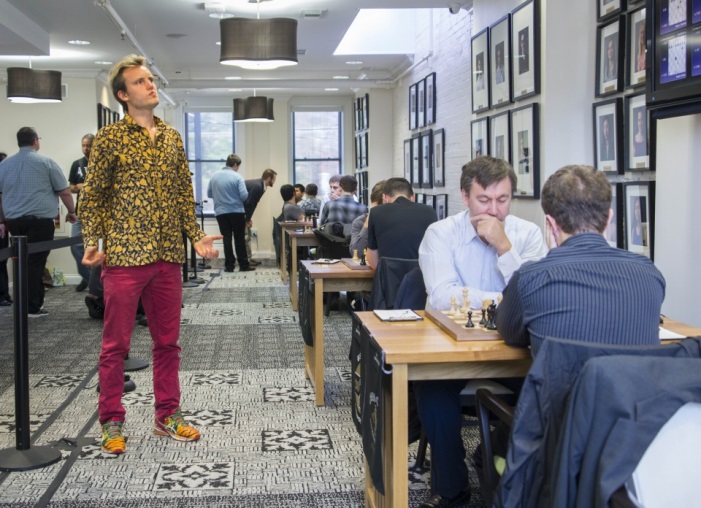 Timur Gareev's pose and the incredible contrast of colours makes this a wonderful candidate for photograph of the year! | photo: Lennart Ootes, official website

2. During a nerve-racking Armageddon game in World Cup tiebreaks Hikaru Nakamura castled with both hands. Ian Nepomniachtchi's subsequent protests fell on deaf ears and the US no. 1 qualified for the next round despite the controversy. 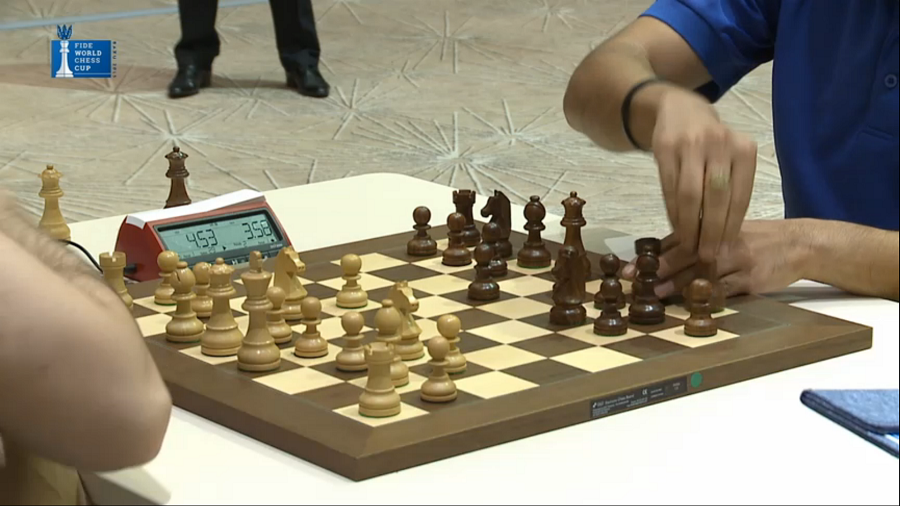 3. During an afternoon blitz session we had a plumbing emergency in the building that houses chess24's Madrid studio. A plumber came to fix it, and during a break from his work he delighted us with some technical comments — pointing out (not entirely correctly...) that Grandmaster Jan Gustafsson had missed mate!

The revelation of the year

2015 was a year of some great revivals from star players — Levon Aronian got back on track with victory in the Sinquefield Cup, a late run from Vladimir Kramnik took the former World Champion to world no. 2 again, but perhaps the revelation of the year — if arguably the greatest player in history can still be a revelation — was Garry Kasparov. The Massacre in St. Louis saw him demolish Nigel Short in magnificent style. The Beast from Baku still has it! 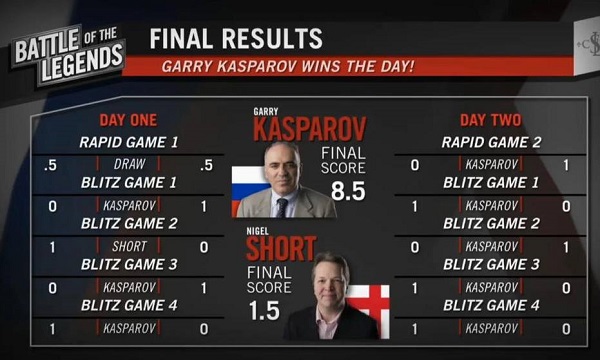 The event of the year

Some were worried a year without either a World Championship match or an Olympiad would be dull... but there was nothing to fear! We were unable to choose between the following three events:

1. The Grand Chess Tour united three great tournaments and created a global event with the world's best players. Norway Chess, the Sinquefield Cup and the London Chess Classic are synonymous with top-class chess. There was some criticism of a lack of variety of players, or even a lack of variety of openings... but an event of this magnitude undoubtedly deserves to be nominated in this category.

2. The year ended in great style with the Qatar Masters Open, one of the strongest — if not the strongest — opens ever held! The line-up was headed by the three players who start 2016 as the world's numbers 1, 2 and 3. The chess public followed the action at least as closely as during an elite round-robin, which leaves the question hanging in the air: opens or closed elite tournaments? 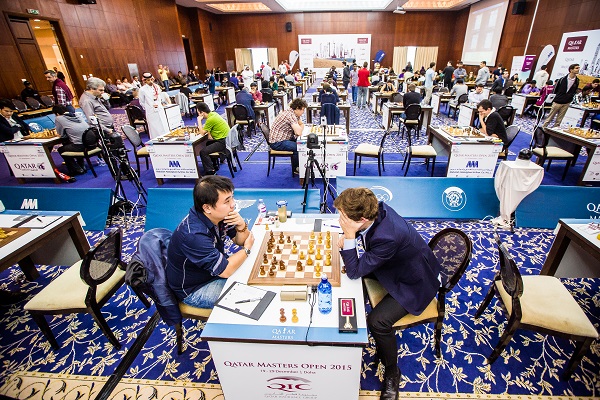 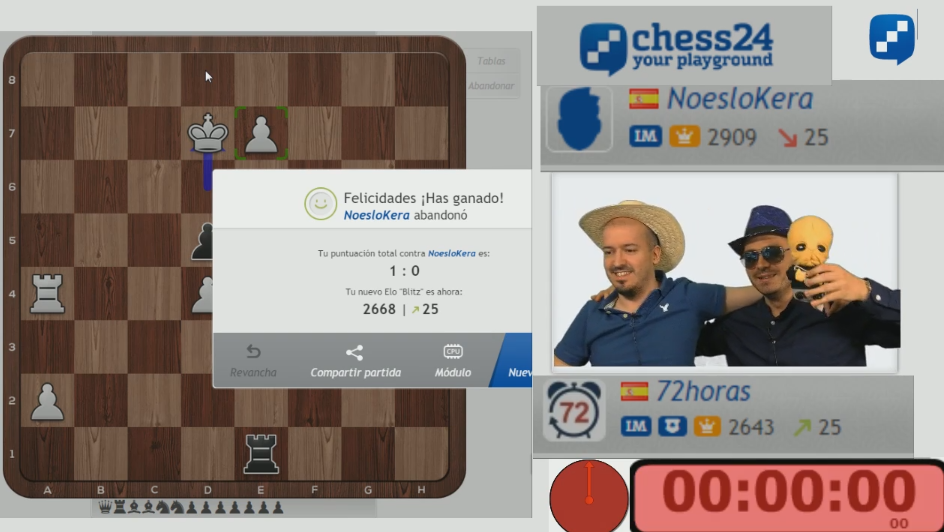 We may not be at quite the same level as the elite, but we put on a show