Wang Hao is just 30 years old, but it once seemed his career as an elite chess player had ended prematurely in around 2014. Last year, however, the Chinese star suddenly re-emerged from the limbo of open tournaments to win the Grand Swiss, hit a career high rating and qualify for the 2020 Candidates Tournament. He has a stunning 5 classical wins to 0 score against Fabiano Caruana, a plus against Grischuk, Nepo and Giri, and has beaten Magnus twice. Is he a real contender in Yekaterinburg? 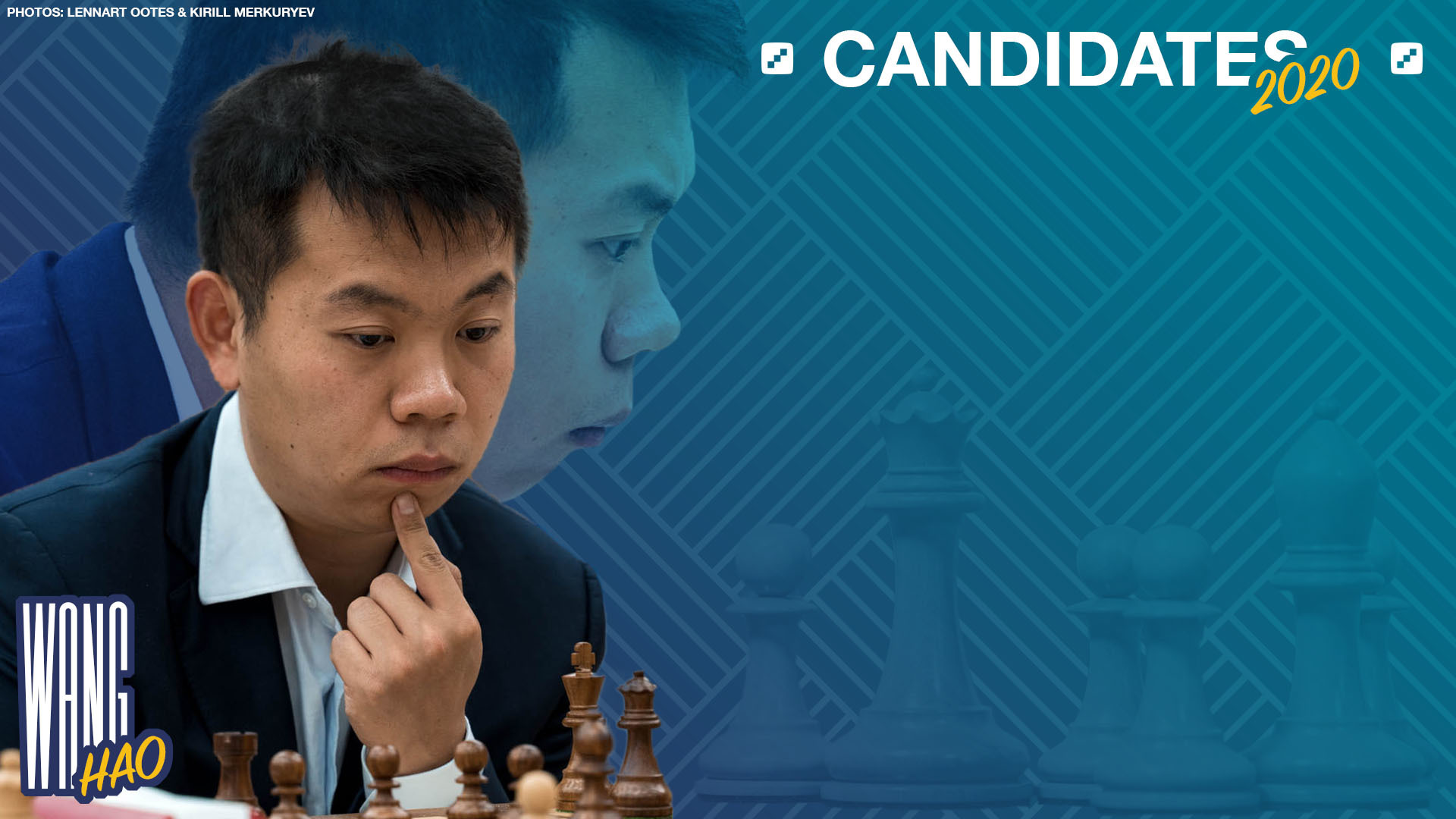 Wang Hao’s 8/11, 2900 rating performance in last year’s Grand Swiss on the Isle of Man was a stunning return to the limelight for China’s former no. 1. 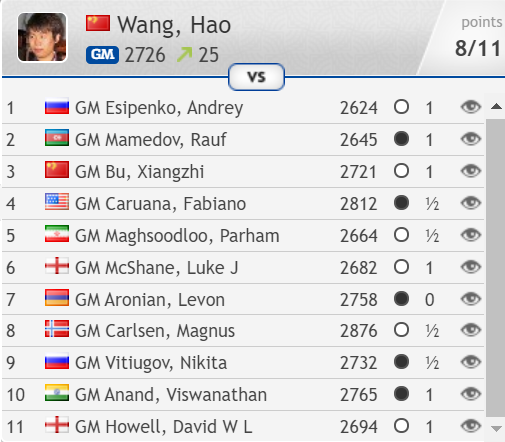 What do we know about him?

You can also check out Wang Hao's chess24 profile.

The verdict of our experts

In a 32-minute video Magnus Carlsen seconds Laurent Fressinet, Jan Gustafsson and Peter Heine Nielsen shared what they knew as well as taking us through an impressively smooth victory by Wang Hao over Fabiano Caruana from Dortmund 2013. 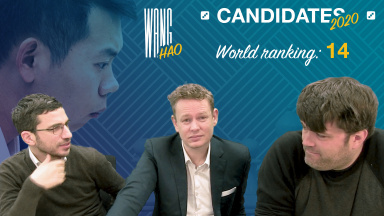 Here’s how they scored Wang Hao in the different categories:

That compares to Kirill Alekseenko’s combined total of 60 points.

As you can see, preparation was seen as a weakness, with Jan doubting whether Wang Hao will be able to adapt to the top-level need for, “seconds and remote engines and organising training camps”. Laurent remembered not being afraid when facing Wang Hao at the board, though Peter noted “the ability to be completely unpredictable is quite something” and compared Wang Hao to Vassily Ivanchuk in that regard.

“Fighting spirit” saw the greatest debate, with Jan drawing on his deep well of Bangkok Chess Club Open experience to explain that Wang Hao “always fights against me, both colours!” Peter pointed out Wang Hao’s wins over Fabiano Caruana and noted, “He doesn’t care – it can be Jan, it can be Caruana, he’s going to play for a win”. There was some support, however, for Laurent’s view that, “he can get demotivated very quickly” and that to some extent the Chinese star is a “moody” player.

Once again, as with Alekseenko, we perhaps have to correct the “Hot or not” scores. Laurent justified giving a player who’s just hit his peak rating only a 3 by explaining, “he didn’t win Gibraltar”. That’s true, but an unbeaten +5 and gaining 4.2 rating points wasn’t bad! 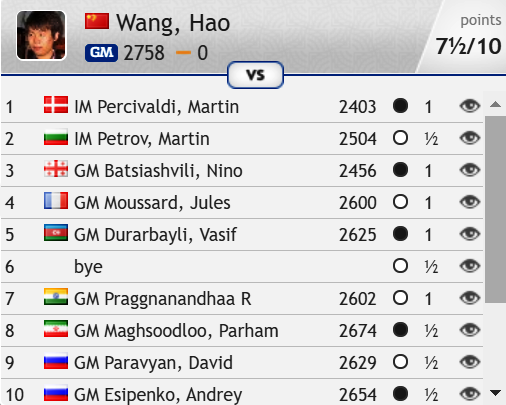 Wang Hao tied for first but finished second after overpressing in the first rapid game of the playoff final against David Paravyan.

Let’s take a look at some of the possible reasons why Wang Hao will, or won’t, make a big impact on the Candidates Tournament:

He can beat anyone: Wang Hao beat Vishy Anand in 28 moves with the black pieces in the penultimate round of the Grand Swiss, and he’s made a habit of beating the very best players. For instance, he beat Vishy and Magnus Carlsen in consecutive rounds of the first edition of Norway Chess in 2013, with Magnus ground down in a heavy-piece ending. He also beat Magnus in the U14 World Youth Championship!

You might be tempted to dismiss Wang Hao’s amazing 5 wins, 4 draws and 0 losses against Fabiano Caruana as results achieved when Fabi was just a kid, but that’s not really the case. For all but one of those wins the current world no. 2 was the much higher-rated player. What you can say is that the last win was in 2013, and Wang Hao has been White in 7 of their 9 games.

Unpredictable: Wang Hao is another of the dark horses for the Candidates Tournament. How will he approach his first elite supertournament in six years? We don’t know, and it’s a fair bet his rivals don’t either. What’s clear is that he’s the kind of player who could easily ruin someone else’s tournament. 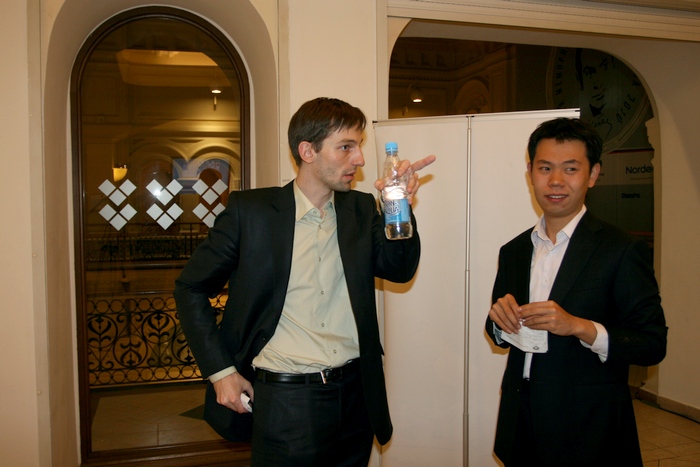 Grischuk and Wang Hao after a draw at the 2010 Tal Memorial | photo: Evgeny Surov, chess-news.ru

Raw natural talent: At the 2010 Tal Memorial in Moscow, where the field was Aronian, Karjakin, Mamedyarov, Grischuk, Nakamura, Wang Hao, Kramnik, Gelfand, Shirov and Eljanov, Levon Aronian told the chess journalist Ilya Odessky that in his view Wang Hao was the most talented player. Back then Wang Hao finished on 5/9, half a point behind Aronian, Karjakin and Mamedyarov. In sheer chess ability he’s not out of place in the Candidates.

Returning to the elite is not going to be easy: After winning the Grand Swiss Wang Hao made a couple of surprising admissions. One was that he almost pulled out of the event as he was feeling tired after the World Cup, while the other was that he mainly works on chess as a coach for around 8 private students. Will a few months have been enough to prepare to face some of the most battle-hardened players in world chess? As Jan noted, dealing with “seconds and remote engines and organising training camps” is likely to have been a novel experience.

Then there’s the psychological pressure. Will Wang Hao be able to handle an elite supertournament, where nothing gets easier after a loss, or is he too used to the rhythm of Swiss opens? It doesn’t help that he starts with Black against Ding Liren, the one player he's struggled against in the past.

The coronavirus: As if the above wasn’t enough Wang Hao’s plans have also been altered by the coronavirus, which hit China first. He had to cancel a training camp planned for Beijing, and although in a way he was lucky to have found himself in Japan…

…he had to abandon plans to return to China before travelling to Russia, since that would have meant a 14-day quarantine period.

Almost no record of supertournament success: Although we’ve flagged up Wang Hao’s impressive record of wins it should be noted that he’s also quite capable of losing to anyone. For instance, before he beat Carlsen and Anand in the last two rounds of Norway Chess 2013 he’d lost 3 games (to Nakamura, Karjakin and bottom-placed Hammer). Or in Dortmund 2013, despite the fine win over Caruana and more wins over Meier and Fridman, he also lost 4 games.

His one supertournament triumph seems to have been Biel 2012, when he finished ahead of Carlsen, Nakamura, Giri, Bacrot and Bologan (and Morozevich, who dropped out after two rounds). A curiosity there, though, is that he lost both games to Magnus and would have finished on 6.5 points to Carlsen’s 7 if normal scoring was used. Instead this was one case where the Bilbao 3-points-for-a-win system made all the difference:

Even in the Grand Swiss, a huge triumph for Wang Hao, we saw hints of instability. He drew a won ending against Vitiugov and lost a drawn ending against Aronian. So he could have scored even more, but the range of Wang Hao’s possible outcomes is very wide.

Whatever happens, Wang Hao should be exciting to watch when the Candidates Tournament begins in less than two weeks’ time on the 17th March. Stay tuned for more previews.