Ding Liren is the top seed as the 128-player month-long World Cup starts on Tuesday in Khanty-Mansiysk, Russia. Magnus Carlsen, Fabiano Caruana and Vishy Anand are skipping the event, but almost all the rest of the world’s best players will be fighting for the $110,000 top prize and two coveted spots in the 2020 Candidates Tournament. We preview arguably the most anticipated chess event of 2019! 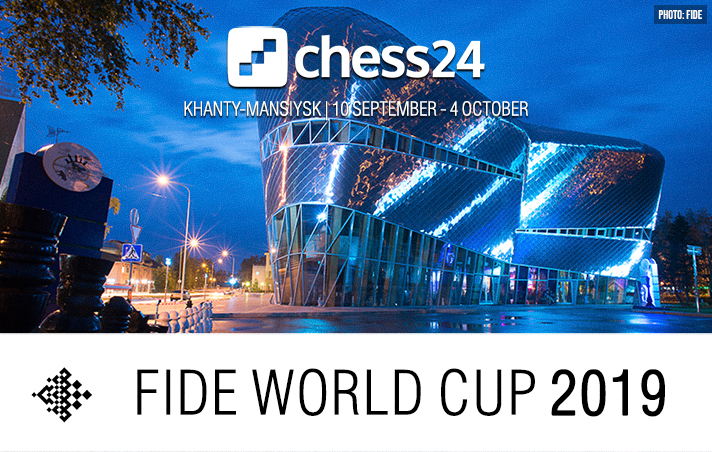 The format is the familiar one of six rounds of 2-game matches before the final and 3rd-place playoff are held over four games. If the matches are tied after two games tiebreaks will be played on the 3rd day, with up to seven games at ever shortening time controls (2 x 25+10, 2 x 10+10, 2 x 5+3 and then 5 vs 4 Armageddon). The brutal logic of knockout events means that by Thursday 64 players will already be on their way home. At least before that they got to see some dancing horses...

Can you predict the outcome?

If we assume the top seeds win (seeding is based on the August 2019 FIDE rating list) these would be the paths to the title for the top 8 seeds:

That gives a good idea of how tough the event is to win (or predict!), but if you’re up for a challenge try predicting all 127 matches in our interactive tournament bracket at Challonge. 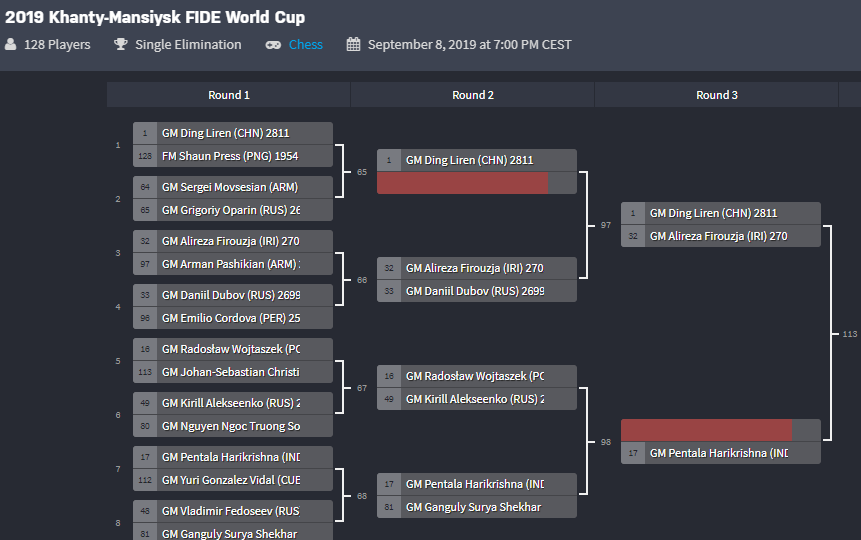 To add to the fun we’ll throw in a 1-year chess24 Premium Membership (or extension) for the winner and two 1-month Premium Memberships for the two next best scoring participants. Predictions will be closed before the start of Game 2 of Round 1 i.e. about 12:00 CEST on Wednesday 10 September. 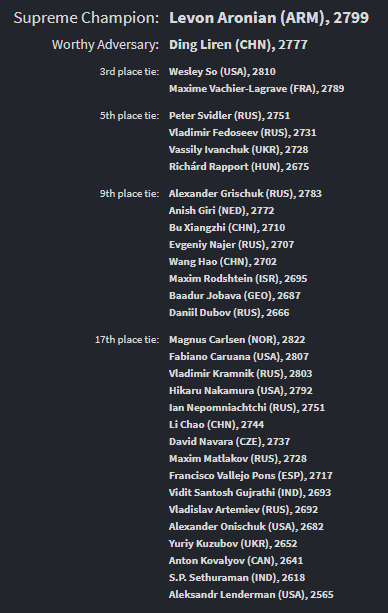 In 2017 the big favourite was Magnus Carlsen (42.7% of the votes), but he was knocked out by Bu Xiangzhi in Round 3, along with the likes of Caruana, Kramnik, Nakamura and Nepomniachtchi (Anand, Mamedyarov, Karjakin and Wei Yi didn’t even make it that far). Still, the predictions did better elsewhere, with winner Levon Aronian the 2nd most predicted winner (13.6%) and MVL, who lost in Armageddon to Aronian in the semi-final, 3rd with 12.1%.

2. Two places in the 8-player 2020 Candidates Tournament that decides Magnus Carlsen’s next challenger are up for grabs and will go to the players who reach the final. It's just been announced that the Candidates will take place in Yekaterinburg, Russia, a city that neighbours Khanty-Mansiysk - in the sense of being within a 1000 kilometres! Russia is big...

If Ding Liren, the runner-up in 2017, is one of those two finalists again, that suddenly blows the race to qualify by rating for the Candidates wide open. Anish Giri would currently be Ding’s replacement, but behind him there’s nothing to choose from between MVL, Nepomniachtchi and Mamedyarov.

3. Of the 128 players, 120 are Grandmasters, 5 are International Masters, 2 are FIDE Masters and just one, 2003-born 2407-rated Monoglian Sugar Gan-Erdene is untitled. His first round opponent? Ian Nepomniachtchi. 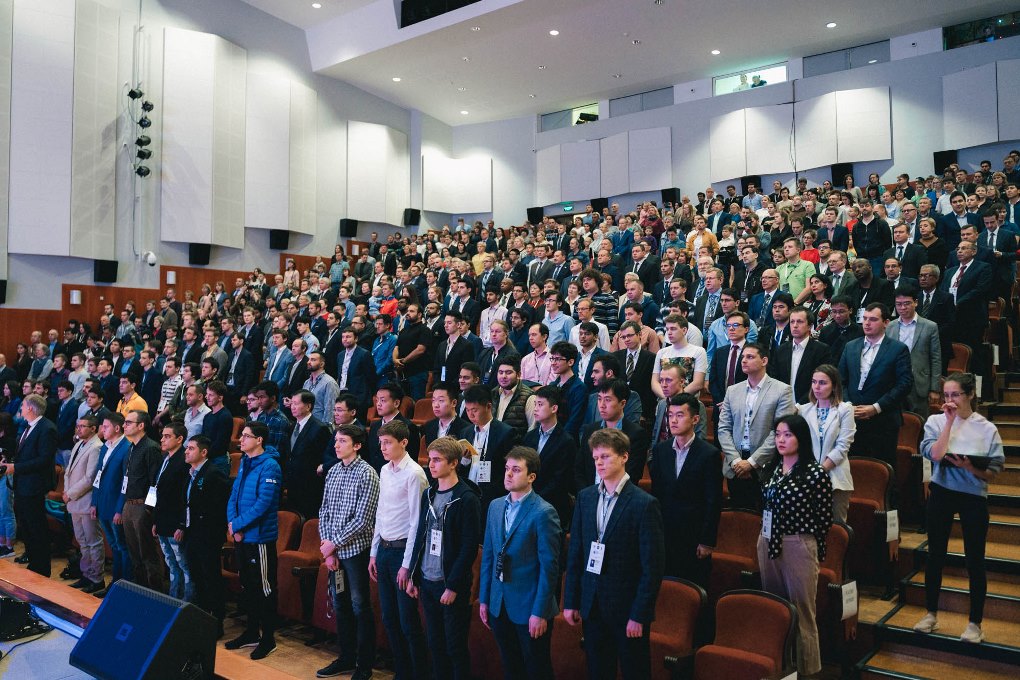 How many players can you recognise from the opening ceremony? | photo: official website

5. The youngest player in the tournament is 14-year-old Nodirbek Abdusattorov from Uzbekistan, who will be hoping to celebrate his 15th birthday in Khanty-Mansiysk on September 18th. The oldest player is 53-year-old Essam El-Gindy from Egypt, who starts against Levon Aronian.

6. Just six of the world’s 37 players rated 2700 and over are missing in Khanty-Mansiysk: Magnus Carlsen (of course he has no need to qualify to play himself in a match, though he did choose to play in 2017), Fabiano Caruana (already qualified for the Candidates), Vishy Anand (Vishy has chosen to concentrate on the FIDE Grand Swiss that follows the World Cup), Vladimir Kramnik (retired from classical chess), Veselin Topalov (semi-retired), Richard Rapport (the most puzzling absence – in 2017 Richard reached the quarterfinals, where he lost to Ding Liren).

7. Zero women will play in Khanty-Mansiysk. Ju Wenjun qualified as the Women’s World Champion but has instead chosen to play in the first stage of the 2019-20 FIDE Women’s Grand Prix in the Skolkovo Science Park near Moscow.

8. There are two rest days in this year’s event – a triumph for Alexander Grischuk, who complained about the policy of only having a single rest day in the Grand Prix events, and one placed before the final rather than in the middle. That’s even more of an issue in the month-long World Cup, so this year an extra rest day has been added on September 19th, after Round 3 – that’s good news for anyone who takes all their matches to tiebreaks! 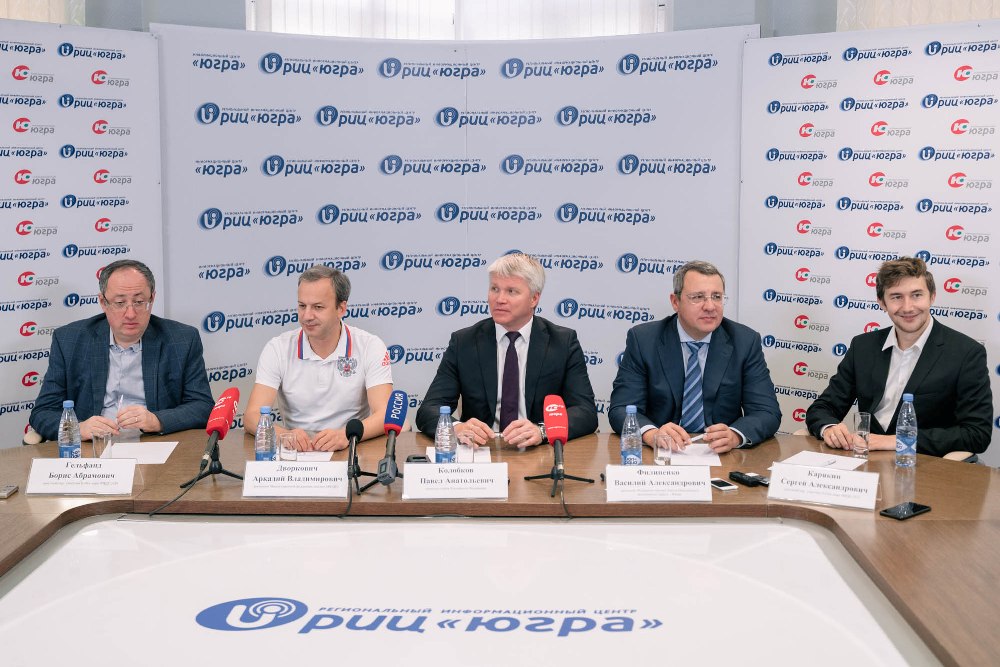 9.  There are four previous World Cup winners in the tournament: Levon Aronian (2005 and 2017), Boris Gelfand (2009), Peter Svidler (2011) and Sergey Karjakin (2015), though if you include the big knockouts that were held as FIDE World Championships before 2005 we also have Ruslan Ponomariov (2002) and Rustam Kasimdzhanov (2004). Ponomariov, who also finished runner-up in 2005 and 2009, was recently described as “an original World Cup gangster” by Peter Svidler, who may meet him in Round 2. In a preview interview Peter commented:

It’s probably the hardest tournament to play in mentally, if you last the distance, but having won it in 2011 I always approach it as something that “on a good day I can do this!”

Of course we could go on, but there’s not long to wait now until the action begins.

Tuesday’s first-round pairings already include numerous intriguing battles, including a number of young stars in action: Matlakov vs. Abdusattorov, Ponomariov vs. Esipenko, Sevian vs. Tari, Cori vs. Nihal Sarin. Some other matches to watch include Fedoseev vs. Ganguly, Naiditsch vs. Huschenbeth (even if Naiditsch now plays for Azerbaijan that ensures German interest in Round 2!) and Bareev vs. Kasimdzhanov, a clash between the former Russian head coach and the current coach of Fabiano Caruana.


Don’t miss all the action live here on chess24 from 12:00 CEST on Tuesday 9th September, when we’ll have full video coverage in English, Russian and Spanish!