The 2016 Candidates opens in Moscow

The 2016 Chess Candidates Tournament was opened on Thursday night in a short ceremony held in Pashkov House. The President of Armenia Serzh Sargsyan was the guest of honour along with most of the players, with Veselin Topalov not yet in Moscow. Vladimir Kramnik was on the scene and joked he could replace him, while we also have World Champion Magnus Carlsen’s view on who will be his challenger.

The Candidates Tournament starts at 15:00 Moscow time today (13:00 CET), so on the eve of the biggest event of many of the players’ lives it was understandable their participation in the ceremony was minimal. There was also another explanation: traffic! The players are just settling into the Four Seasons Hotel which, as we explained in our earlier report, is just outside the Kremlin walls. We soon got to see the spectacular view from the top on social media:

Karjakin: “I challenge Peter Svidler to a duel”

The opening ceremony was taking place in Pashkov House, an 18th century mansion built on a hill overlooking the other side of the Kremlin:

Russian Chess Federation President Andrey Filatov would later half-joke, "of all sports chess is closest to the Kremlin" 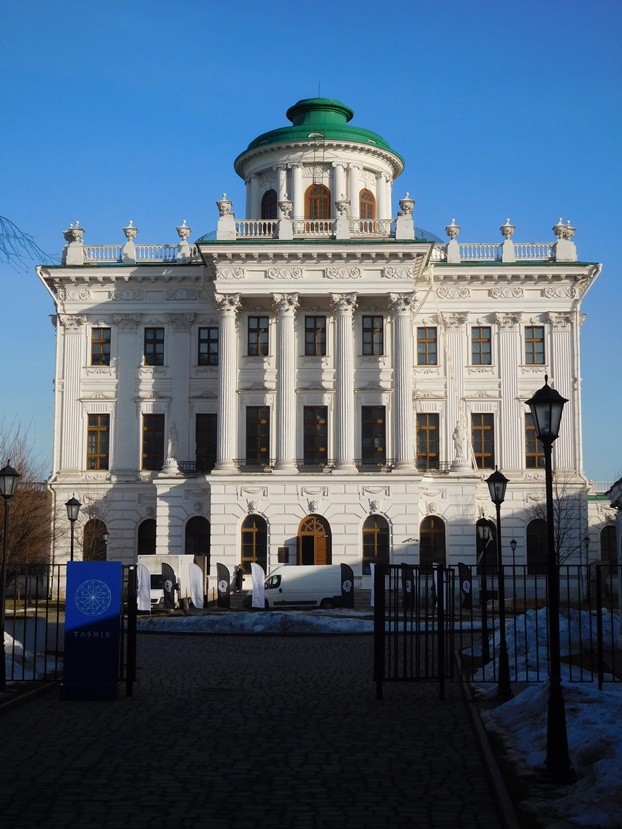 By foot it would be a mere 10 minutes, but some of the players went by car, when the extraordinary Moscow road system interfered.

This is before the rush hour began...

Not that anyone at the ceremony was too bothered, with one official sponsor making its first splash:

If things are going badly for any of the players the drowning of sorrows will be an option during the event | photo: Vladimir Barsky, Russian Chess Federation

Two well-known Russian hosts read from a script and presented the players in the form of their caricatures on the wall behind them.

Suddenly you begin to wonder if all the players are clones of each other... | photo: Vladimir Barsky, Russian Chess Federation

Then we moved into a succession of speeches by the great and the good, including Agon CEO Ilya Merenzon, FIDE President Kirsan Ilyumzhinov (“over the next two weeks Moscow will be the centre of the chess world”), Russian Deputy Prime Minister Arkadiy Dvorkovich (“of course we hope for a Russian victory but it will be a fierce, fair and beautiful fight”) and Armenian President Serzh Sargissian – the Armenian-Russian Tashir Group is sponsoring the event and achieved a wild card for Levon Aronian.

Armenia was of course also well represented away from the stage, with Levon Aronian and his coach Arshak Petrosian in good spirits | photo: Vladimir Barsky, Russian Chess Federation

Until a day before the event an appearance by the Russian President Vladimir Putin had been expected, but plans changed.

The ceremony soon switched to a piano recital by Anton Batagov and a display of contemporary ballet.

The last remaining chess element of the opening ceremony was announcing the pairings for the first round, but since they’d been announced a month ago there was a distinct lack of drama. In case you’d forgotten, here they are, with players from the same country deliberately paired together in Round 1 as an anti-collusion measure (in the unlikely case they wanted to fix the result they wouldn’t yet know how):

There was refreshment and chessboards, though, so what else was needed!

Vishy Anand was enjoying himself as he prepares to prove the doubters wrong and qualify for yet another World Championship match | photo: Vladimir Barsky, Russian Chess Federation

Vladimir Kramnik appeared just after it had been announced that Veselin Topalov still hadn’t arrived in Russia and would be going straight to the venue the next day.

Kramnik, the current world no. 2, apparently quipped, “I thought, perhaps suddenly someone won’t turn up and I can replace them!” | photo: Vladimir Barsky, Russian Chess Federation

In this tournament there’s no clear favourite. We’ve now got a situation where all the participants are roughly equal and it’ll all depend on who gets into the best form and is as ready as they can be. In my view it’s a tournament that any participant can win and I’m almost sure that it’s all going to be decided in the final three rounds.

The current World Champion was fortunately more forthright in his views when he talked to VG.no earlier this week:

Is Hikaru Nakamura the opponent you’d like in New York?

It would be fun, but I don’t think he’s going to win.

I think it will be one of the three: Fabiano Caruana, Levon Aronian and Sergey Karjakin - that’s what I would say. Everything else is pure guesswork. So if I were to put money on the Candidates Tournament I would put it on one of those.

Carlsen was asked if age might be a factor, with Caruana and Karjakin having an advantage:

Well, it might tell. As I’ve said before, it would be strange if I met Viswanathan Anand for a third time. And it would surprise me if Veselin Topalov or Peter Svidler managed it, but I must say I feel Aronian is more like my generation, even though he’s a few years older.

Why do you see him as your generation?

Because we started playing top tournaments at around the same time. I actually look on Aronian as being more of my generation than Caruana.

So after the brief opening ceremony it was back to the hotel and time to prepare for Round 1 of the 2016 Candidates Tournament. Let's give almost the last word to Sergey Karjakin:

Eight players and only one place that matters! Don’t miss our coverage here on chess24.