The 10 Most Incredible Stalemates in Chess History

In the first round of the 2022 French League, the young FM Floryan Eugène played one of the most incredible swindles in chess history based on a stalemate, against GM Jean-Luc Chabanon. I've taken the opportunity to review the 10 most amazing stalemates ever played. 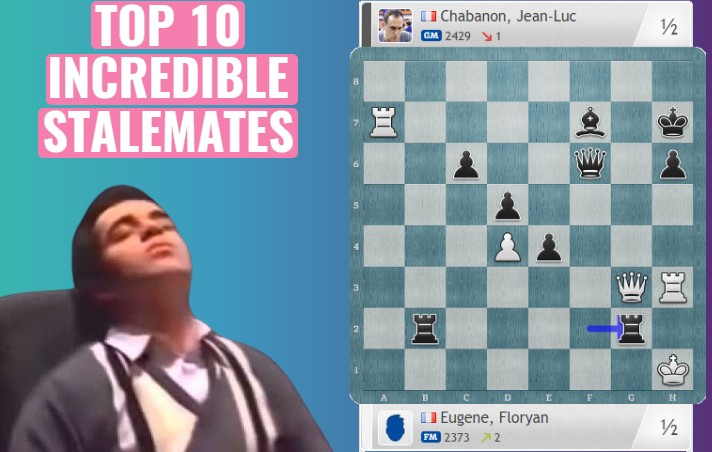 For once, I will proceed in chronological order.

In a desperate position, the legendary study composer managed to save himself by showing all of his creativity over the board.

White to play and set a trap

Who else than a genius composer could have imagined White getting stalemated in 3 moves, despite having a queen, two rooks, a bishop, a knight, and 5 pawns?

1.Rd1!! setting an amazing trap 1...Bh3?? into which Black fell! It looks like White just has a couple of checks before getting mated on g2.

I must admit that this is probably my favourite stalemate ever played, but read on, the others will dazzle you as well!

And White is one tempo short to prevent stalemate

Black to play and set a trap

At 74, Miguel Najdorf was still a fierce competitor, playing at a grandmaster level. Yet, his attention slipped when his opponent tried his luck with 1...Rxc3! 2.Qxc3?? 2.Qd4! Rxh3+ 3.Kxh3 and after a few checks, Black can resign.

No matter what White captures with, Black will play 3...b3+! and draw

This is probably the longest stalemate combination ever played!

7...Qg1+ and resign after a few more checks because there is no perpetual?

The last move of this 9-move combination!

Another long combination that requires precise play from both sides is shown in the following example.

Up an exchange but down two pawns, White attacks every Black pieces with 1.Nc5! Rxa2! In order not to lose, Black has to sacrifice the queen! 2.Nxe6 Ra1!

This freshly played combination reminds us that even nowadays, grandmasters can blunder into a stalemate.

White to play and set a trap

Three pawns down against his grandmaster opponent, the young FIDE Master Floryan Eugène found the ingenious 1.Kh1!! which he played while displaying his best poker face. The trap worked perfectly as GM Jean-Luc Chabanon naively took the bishop with 1...Rxg2?? probably waiting for White to finally resign.

Actually, the draw is now forced!

Can you figure out how Floryan Eugène saved his game? Write your answer in the comments below.