Swedish no. 1 Nils Grandelius beat his compatriot Erik Blomqvist to join Baadur Jobava in the lead with just Sunday’s final round of the TePe Sigeman & Co. Chess Tournament remaining. The game of the day was a first win for Pavel Eljanov, who ultimately managed to refute an inventive piece sacrifice from Nigel Short. Jobava was held to a draw by Harika Dronavalli, who has drawn all three of her games with the black pieces in Malmo. 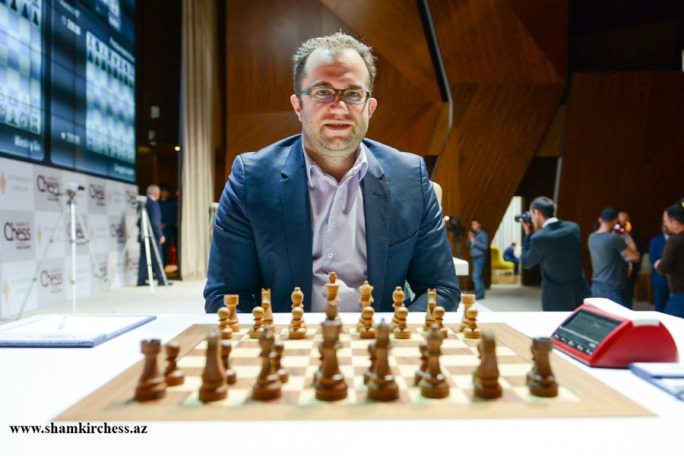 Pavel Eljanov got his first win since he started Shamkir Chess with 2/2 | photo: Gashimov Memorial

Saturday’s penultimate round saw Grandelius and Eljanov grab their first wins of the tournament:

Baadur Jobava’s game with the white pieces against Harika Dronavalli looked like a real chance to break clear before the final round, and it started well for the Georgian maverick. His surprise opening weapon? To play a main line, with Harika admitting she was out of book on move 5 after having spent her time preparing for moves like 1.b3 and 1.f4. A huge smile never left her face during the post-game press conference (which was joined off-stage by Jobava):

The Indian no. 2 explained she was waiting for her opponent to castle so she could castle the same side, since she, “didn’t want to get mated today!” Jobava got a good position out of the opening, but felt his big mistake was playing 19.b5:

That allowed 19…Bf5! and the worst was over for Black. The players reached a four knights plus pawns ending that was drawn in 40 moves.

The all-Swedish battle between Nils Grandelius and Erik Blomqvist saw an English Opening in which White had only a slight edge until Black collapsed in the space of two moves. Nils described his opponent’s 23…h6?! as “a big blunder” (23…Nc6! would solve the problem of Black’s one bad piece), while the next move 24…Rxc8? instead of 24…Qxc8 was simply losing. Nils pounced with 25.Qg4!

It’s an amusing situation in which if Black does nothing all eight knight moves for White are winning due to the devastatingly simple threat of Rd7 and mate on g7. Erik thought for 34 minutes before going for 25…Qa6, which had the virtue of getting the queen out of the firing line and preventing immediate knight jumps. After 26.Kh3 Re8 the moment of reckoning had come, though:

Here Blomqvist resigned. After 31…gxf6 32.Qxf6+ Kg8 White can even tease his opponent by not taking the c6-knight immediately, since the threat of mate prevents it from going anywhere. 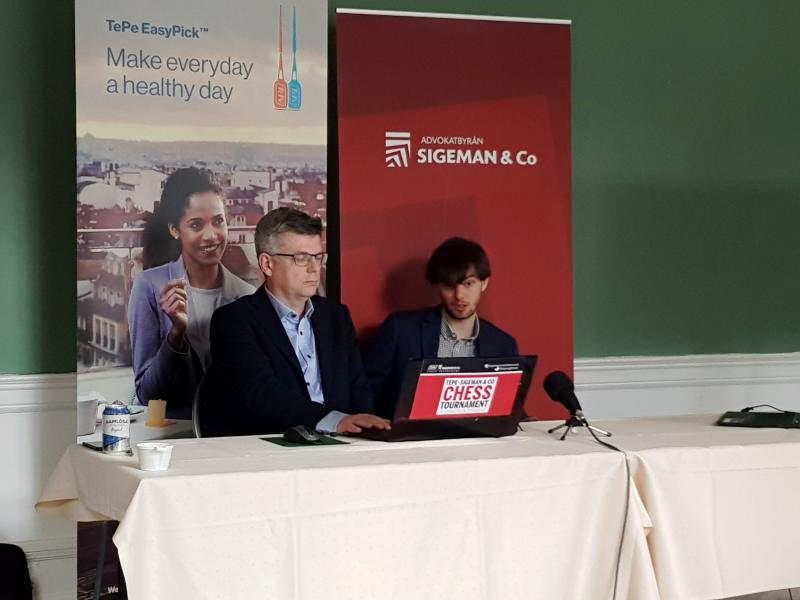 Nils Grandelius got his first win of the tournament, caught the leader and reasserted his claim to be the Swedish no. 1 - not bad for a day's work! | photo: official website

If that was a one-sided massacre from 24…Rxc8 onwards, Short-Eljanov was a hugely entertaining brawl that was all but impossible to assess without the help of chess engines. Nigel Short stayed true to his usual maximalist approach by playing 2.f4 against Pavel Eljanov’s Caro-Kann and followed up with more aggressive chess. The results were mixed:

Here Nigel sank into a 30-minute think, during which it dawned on Eljanov what was coming… 20.Ng2!!?

Eljanov is also a principled chess player and he accepted the piece with 20…fxe3. Short demonstrated his idea with 21.Qf7+ and chasing the king across the board until it reached a6:

Nigel’s blood lust saw him target the black king directly instead with 25.b4, playing to give a queen check from f1. If that had been mating it would have been justified, of course, but instead Eljanov was simply able to exchange off queens and reach a technically winning ending. There were no more twists as Pavel won in 50 moves, ending a miserable sequence of no wins and five losses in ten games after the Ukrainian no. 1 had stormed to a 2/2 start in Shamkir Chess:

Eljanov finally had something to cheer about again | source: 2700chess

For Nigel, meanwhile, it meant crossing 2700 was no longer a possibility as he dropped to 2690.2 on the live rating list. The curse of that rating barrier continues, with Nigel like Julio Granda last year having come within a point only to drop back again.

Pavel Eljanov is now one of four players in with a chance of winning TePe Sigeman Chess:

In the final round – held two hours earlier on Sunday – Eljanov has the white pieces against co-leader Grandelius, while the other leader Jobava has Black against Blomqvist. If the players end tied then the places and prize money will be shared. Harika-Short can’t affect first place, but is a chance for both players to end on a high. Don't miss the action with live commentary here on chess24. You can also watch the games in our free apps: