The theory that knockout tournaments are a lottery isn’t getting much support in Tehran! Of the eight players to reach the quarterfinals of the Women’s World Championship all but two of them were seeded to get there. Tan Zhongyi qualified as the 9th seed after beating Padmini Rout, who knocked out 8th seed Zhao Xue, while only 19-year-old Chinese player Ni Shiqun is a revelation. The 38th seed has beaten three higher-rated players, including 6th seed Valentina Gunina. 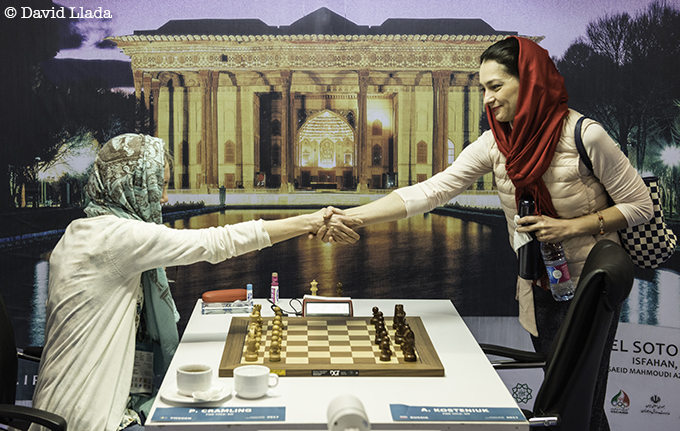 Half of the eight matches in Round 3 went to tiebreaks, all of which finished in the 10-minute games, but only one underdog managed to survive – Ni Shiqun, who beat Natalia Pogonina. It was the end of the road for Olga Girya, Padmini Rout, Sopiko Guramishvili, Shen Yang, Pham Le Thao Nguyen, Nino Khurtsidze and Pia Cramling.

The quarterfinals that now await us on Monday are (with the seeding number in brackets):

The only country with more than one player remaining is China, who are guaranteed to have at least one player in the semifinals after Ju Wenjun and Tan Zhongyi’s match. They reached that match after the day’s most dramatic tiebreaks: 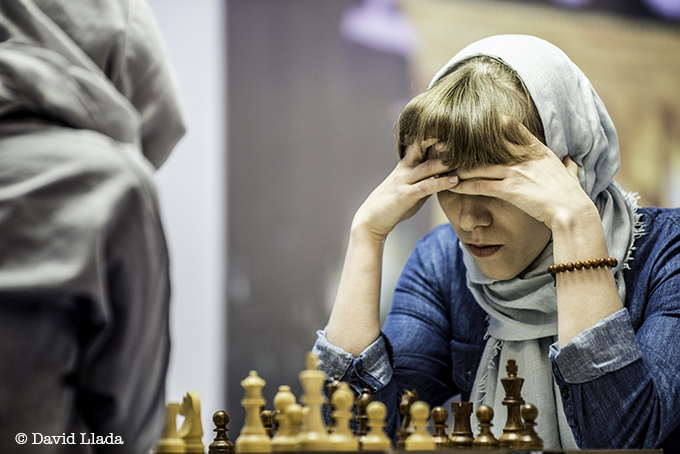 In particular Girya vs. Ju Wenjun was a heavyweight battle. Olga committed the day’s most glaring blunder with 24…Nd4??

25.Qxd4! simply won a piece. Girya didn’t give up without a fight, though, hitting back nicely in the next game with 26.e4!

26…dxe4 runs into 27.Nxc6! so there was actually nothing better than 26…Qxe4 27.Qxe4 dxe4 28.Nd7. Ju Wenjun tried to prevent the knight fork with 28…Qe6, but it just became more powerful after 27.exd5 cxd5 28. Rc7+. Girya went on to win smoothly and was also winning a rook ending in the following game. She couldn’t convert, though, and it was world no. 2 and top seed Ju Wenjun who went into the quarterfinals.

Ju Wenjun's leading supporter may be Humpy Koneru, who will play a World Championship match against her if the Chinese player wins in Tehran | photo: David Llada, official website

Let’s look at how some of the players reached the last eight.

No less than five players have come through three matches without losing a game. Something will have to give in the quarterfinals, though, since four of them are paired against each other: Stefanova vs. Muzychuk and Kosteniuk vs. Ni Shiqun. The other player is Harika Dronavalli. 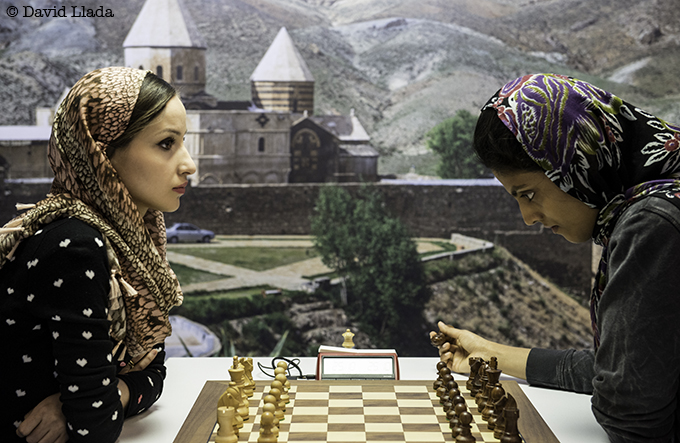 Harika holds the curious record of having won only a single game in each round, despite having played 14 games. All of the wins came in tiebreaks, with a single decisive game not really reflecting the excitement of her latest tiebreak against Sopiko Guramishvili. Both players let wins slip with the white pieces in the 25-minute games before Harika crashed through in the first 10-minute game and was so much better in the second game that Sopiko offered a draw.

Harika’s opponent now is her polar opposite! Nana Dzagnidze has seven wins, including six in a row, though most of the drama was reserved for her first round encounter with Egypt’s Khaled Mona, when the Georgian player twice had to come from behind. Since then Nana has beaten Olga Zimina 2:0 and Shen Yang 1.5:0.5. The other player with seven wins is Tan Zhongyi, who also wins the next category…

Longest route to the quarterfinals 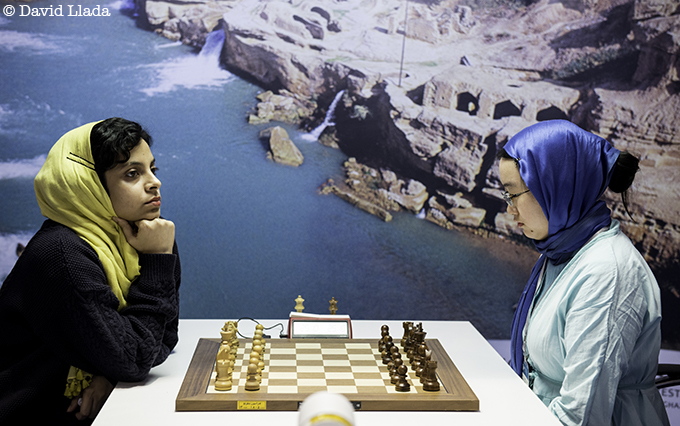 Tan Zhongyi beat Sabina-Francesca Foisor in the two classical games, but since then it’s been a battle all the way. Her second round match with Anna Ushenina went to Armageddon, while she needed six games, included one win on demand, to overcome Padmini Rout. That win was pretty!

The last two knockout Women’s World Championship winners have been from Ukraine, and if that trend is going to continue it’ll be because Anna Muzychuk has followed in the footsteps of her sister Mariya. So far she’s sailed through the tournament, winning five games and conceding only a single draw to Alina Kashlinskaya. 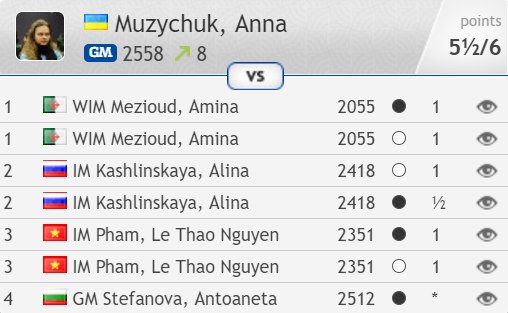 It’s not just that Ni Shiqun has beaten three higher rated players – Lilit Mkrtian, Valentina Gunina and Natalia Pogonina – but that she’s done it as efficiently as possible, winning four games, drawing two and having no need for tiebreaks. 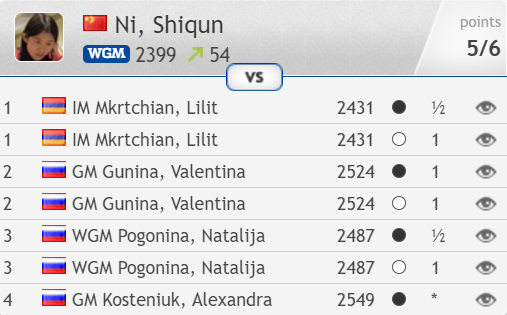 She’ll be trying to break more Russian hearts by beating former World Champion Alexandra Kosteniuk in the quarterfinals, but whatever happens now she’ll be able to look back on a potentially career-defining event.

So we’re down to eight players who are now fighting it out for a place in the semifinals of the 2017 Women’s World Championship. Watch all the action here on chess24 from 12:30 CET each day. You can also follow the games in our mobile apps: