Tan Zhongyi and Nino Khurtsidze both won matches that went all the way to Armageddon in Round 2 of the Women’s World Championship in Tehran, but nothing could compete with the thrills and spills of Sopiko Guramishvili’s heart-stopping victory over Nataliya Buksa. The 16 players who will now compete for a place in the quarterfinals feature 4 Chinese players, 3 Russians, 3 Georgians, 2 Indians and 1 each from Ukaine, Sweden, Bulgaria and Vietnam. 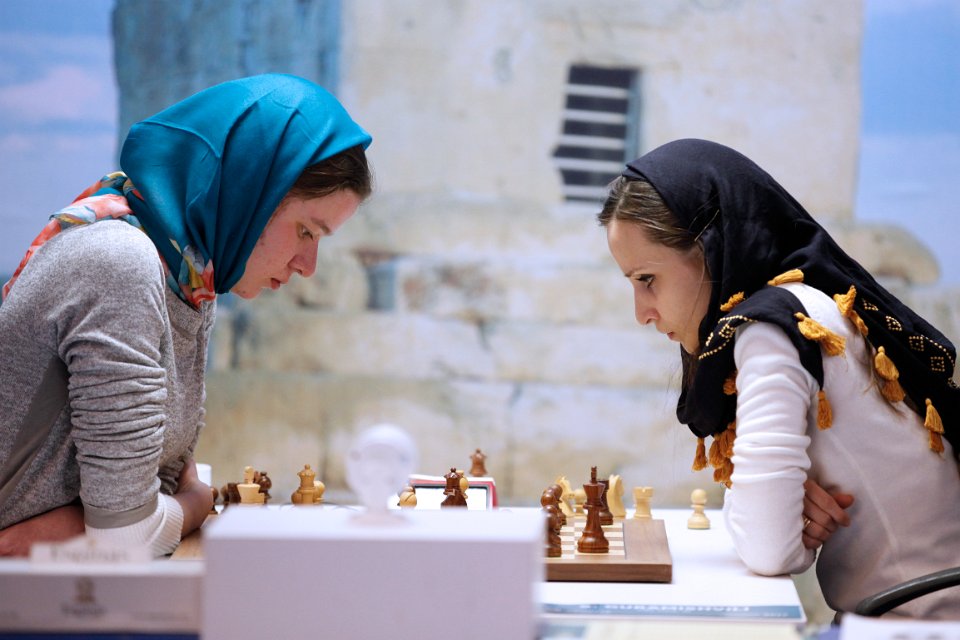 The full Round 2 tiebreak results looked as follows (play through all the games here): 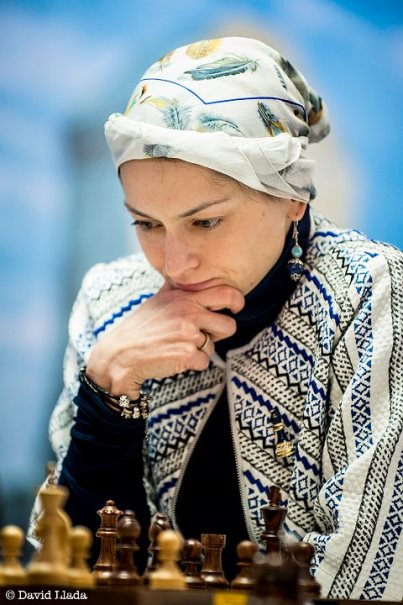 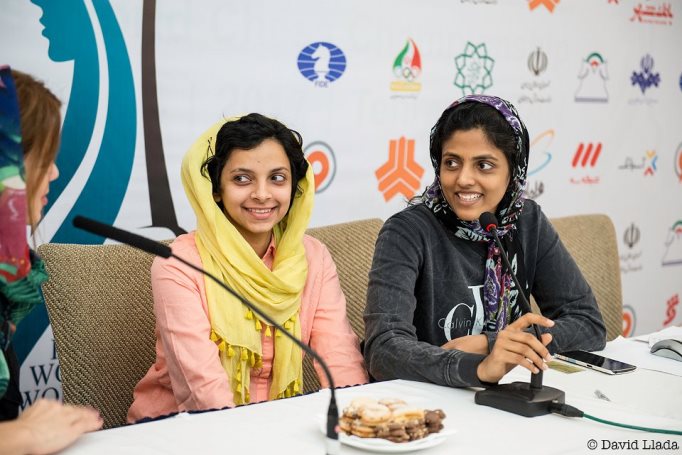 Padmini Rout and Harika Dronavalli have made up for the absence of Humpy Koneru | photo: David Llada, official website

It was an impressive showing for India, who began the World Championship with just the same two players. Other countries have seen their players drop like flies, with Russia reduced from 11 to 3, Georgia from 8 to 3 and Ukraine from 5 to 1, including the loss of former World Champion Anna Ushenina. China are the numeric favourites to produce the next World Champion, with 4 players remaining from their starting 7.

The one player who managed a 2:0 win in the 25 minute games was Pia Cramling, who knocked out Elisabeth Paehtz:

The Swedish Grandmaster has pedigree, since she reached the semi-finals of the last 64-player knockout in 2015!


The player who beat Pia in that semi-final, Natalia Pogonina, was the only player to end her match in the 10-minute rapid games, where she overcame Huang Qian.

Two matches went all the way to Armageddon games, which lived up to their name. Anna Ushenina had a winning position with White against Tan Zhongyi, but it was a tricky ending she was unable to convert. The draw meant Tan Zhongyi made it through into the next round.

Nino Batsiashvili came even closer against compatriot and namesake Nino Khurtsidze. Again, she had the white pieces, and an overwhelming advantage:

42.Nf7! is the simplest win here, aiming for Nh8-Nxg6 and queening either the g-pawn or d-pawn. In this case White is in time to return with the knight and stop the black a-pawn, while in the game… White was several tempi too late and favourite Nino Batsiashvili was out.

That leaves, of course, one match, which had enough drama to fill the whole day. Only the first game was a relative non-event, with Sopiko Guramishvili failing to get anything with the white pieces against Nataliya Buksa. In the next game, though, Sopiko was set to move into the next round smoothly:

59…h4! here, or at various points in the upcoming moves, was winning. The black bishop can help restrict the white king and e3! is a winning jab in many lines. Instead Sopiko delayed the move until it was far less effective and the magic of opposite-coloured bishops eventually proved enough for Nataliya.

The Ukrainian player was on a roll and won an impressive game with the black pieces in the first 10-minute game, meaning all she needed was a draw with the white pieces in the next. It seemed only a matter of time before she achieved that when she reached a theoretically drawn Rook vs. Rook + Knight position - a draw much easier to prove than the similar Rook vs. Rook + Bishop.

Anyone who skimmed through what happened next without a computer would assume Nataliya simply blundered a way to lose her rook, which can happen in a fast game under huge tension. It was much more dramatic than that, though! Sopiko has just played 125…Rg2+ 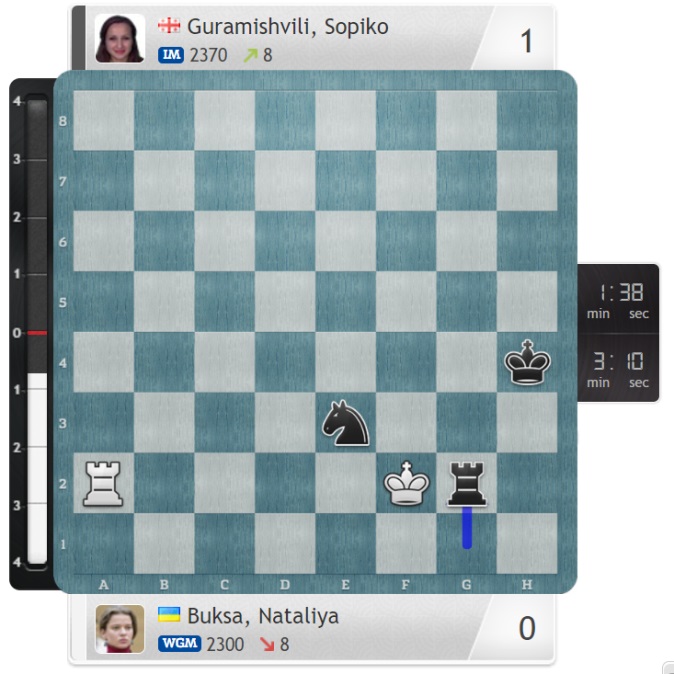 Nataliya, understandably, thought it was game over, and made the meaningless move 126.Kxe3?? before resigning after 126…Rxa2. What she missed, though, was that 126.Ke1! still holds the draw, since 126…Rxa2 is stalemate! What a way to lose a game of chess. 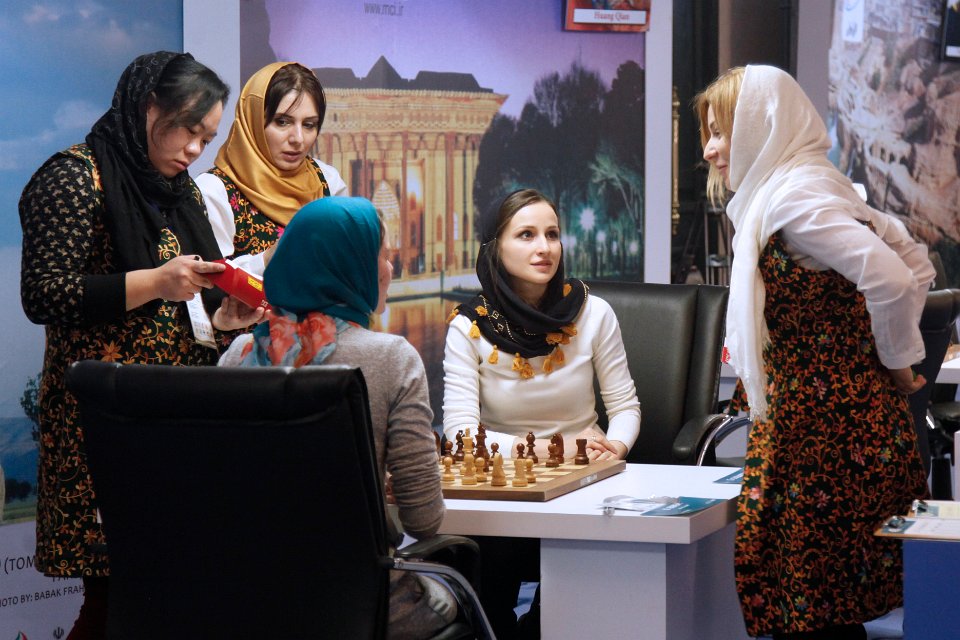 Both players were in need of some moral support! | photo: Anastasia Karlovich, official website

Yet again, though, Nataliya was able to shrug off that disaster and achieve a winning position in the next game, until she completely missed the point of Sopiko’s 32…Nb5:

Nataliya played 33.c4?? which allowed 33…Qxe5! and Black had won the exchange and could soon force a draw.

After such a spectacle the final game was almost an anti-climax, since Sopiko soon had a winning attack with the white pieces, which she eventually converted into a two-pawn advantage in a pawn ending. It wasn’t strictly necessary for Nataliya to play on until mate but, given what had gone before, who could blame her!

So we’re down to 16 players who are now fighting it out for a place in the quarterfinals of the 2017 Women’s World Championship. Watch all the action here on chess24 from 12:30 CET each day.