After the 11 tiebreaks on Monday all three local Iranian players are out of the 2017 Women’s World Championship. Sopiko Guramishvili bounced back from defeat the day before to stun Iranian no. 1 Sarasadat Khademalsharieh with some more fine attacking play, while Mitra Hejazipour finally lost an epic battle to Anastasia Bodnaruk when she lost on time in Armageddon. All 9 games of that match were decisive! 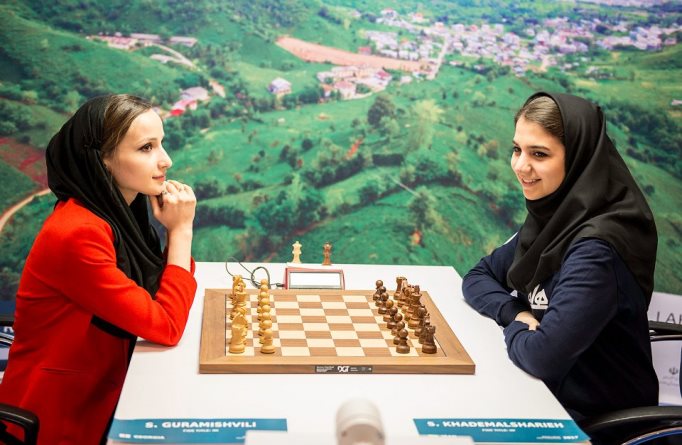 Sopiko vs. Sarasadat was a dramatic encounter, with a view | photo: David Llada, official website

There are different ways to get to Round 2 of the World Championship, but they’re seldom as different as this: while Bodnaruk needed 9 games and many frayed nerves Olga Girya qualified for Round 2 by default since her paired opponent Cristina Adela Foisor passed away less than a month ago and wasn’t replaced:

You can’t begrudge Anastasia her place in the second round, since she had to bounce back from a loss four times. She actually had to win on demand five times, since she had White in the final Armageddon game.

In purely chess terms a win for the Russian player looked unlikely since she ended up in a lost position, but the clock came to her rescue when her opponent’s flag dropped, metaphorically speaking, in the following position:

Elsewhere all but one of the other matches ended in the first two 25 minute + 10-second increment rapid games, and it was the end of the road for many valiant underdogs such as Argentina’s Ayelen Martinez, Cuba’s Maritza Arribas Robaina and Akter Liza Shamima from Bangladesh.

The latter was outrated by almost 500 points by Harika Dronavalli but scored three draws. Harika’s win was pretty, though!

Egypt’s Mona Khaled (2150) managed to again take the lead against Nana Dzagnidze (2525), but eventually lost both of the 10 minute rapid games.

One of the standout results was an upset win for Sopiko Guramishvili, who shrugged off her loss on Sunday to win both tiebreak games against Sarasadat Khademalsharieh. The first was another absolutely crushing win in the f3 Nimzo...

...and you wonder if a certain super-second husband has been giving some tips!

It was clear Black’s days were numbered when Sarasadat played 21…g6:

Sopiko’s 22.Be2 may only be the second best move in the position (22.Qh6! is even better), but it’s enormously hard to defend against the basic plan of transferring the rook to the kingside and overwhelming the black king e.g. 22…gxf5? 23.Qh6! is mate-in-26 according to Stockfish 8 on our site. 22…Bc8 may have been the best response, while after 22…Qc7 the game was soon over.

Sopiko didn’t give her opponent a glimmer of hope in the second game and now plays Nataliya Buksa in the next round. The 2300-rated Ukrainian is the lowest rated player left in the field after pulling off an upset to beat Thanh Trang Hoang, but as a former Women’s Junior Champion she’s not to be underestimated!

Other mild surprises included Anastasia Savina beating Monika Socko, Salome Melia beating Ekaterina Atalik and perhaps Olga Zimina beating Bela Khotenashvili. In the latter case their ratings were within 25 points, but Olga, who now plays for Italy, is a less familiar name. She also shouldn’t be underestimated, though – she won the Russian Women’s Championship in 2001.

Monika Socko, who knocked out Hou Yifan in the 2012 World Championship, is among the 32 players now leaving Tehran | photo: David Llada, official website

So we’re now down to 32 players as once again we have the same match format of two classical games on Tuesday and Wednesday before potential tiebreaks on Thursday. Watch all the action here on chess24 from 12:30 CET.