Only six players won their Women’s World Championship first round matches 2:0 as Natalia Zhukova, Elina Danielian and Lela Javakhishvili found themselves among the 20 players whose tournament is already over. 11 matches went to tiebreaks after six players managed to win on demand in Game 2 after losing their first game, including both stars such as Dzagnidze and Khademalsharieh and outsiders such as Argentina’s Ayelen Martinez, who hit back against 250 points higher rated Zhao Xue. 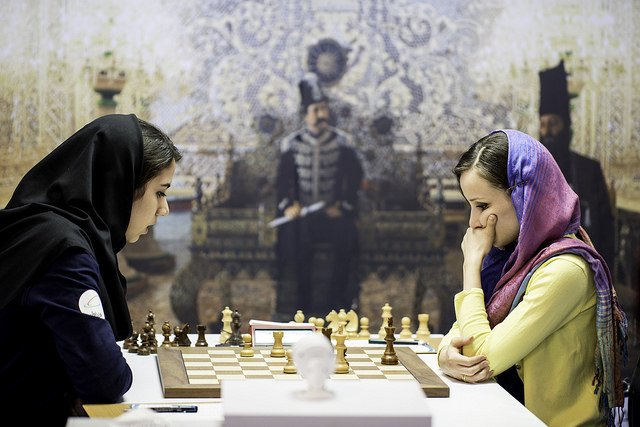 The match between Iran's no. 1 female player and Sopiko Guramishvili was one of those to go to tiebreaks on Monday | photo: David Llada, official website

Teimour Radjabov had some advice on how to watch the Women’s World Championship knockout in Tehran:

Given what we’ve seen so far, though, that might easily mean missing some of the star names getting knocked out! Day 1 on Saturday immediately saw dramatic action, with some players and observers complaining that the playing hall was overheated:

Not all players shared that view and the situation was already resolved by the second game, but there were still some moments that needed an explanation! For instance, Anastasia Bodnaruk was in time trouble in a somewhat tricky position… 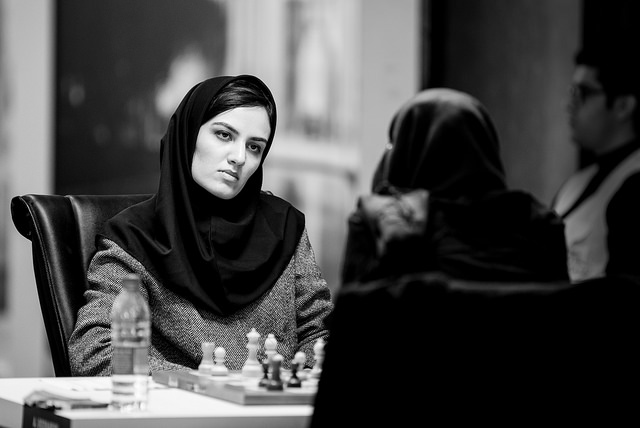 Among the other notable wins were victories for Egyptian WGM Khaled Mona over almost 400 points higher rated Nana Dzagnidze, Nino Khurtsidze over Natalia Zhukova and a fine win for Sopiko Guramishvili over Iranian no. 1 Sarasadat Khademalsharieh. The final position summed up the game, with Sopiko completely dominant with the white pieces: 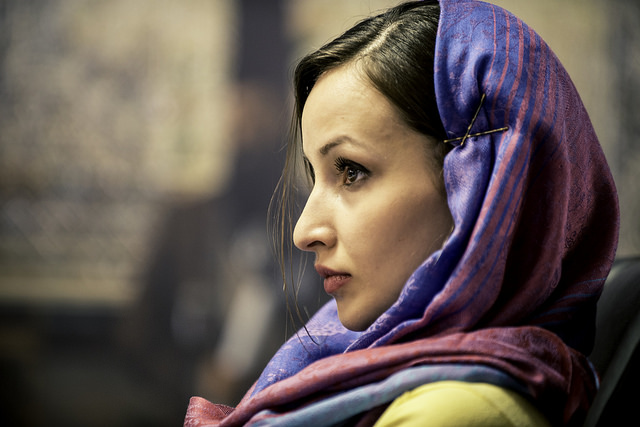 Sopiko Guramishvili seemed to be right back on track after her incredibly tough event in Wijk aan Zee | photo: David Llada, official website

Monika Socko eventually managed to “prove” that all rook endings are drawn, but it wasn’t entirely convincing. 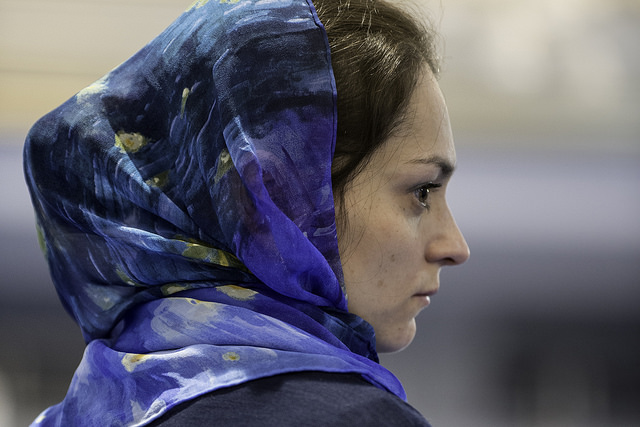 On Day 2 Natalia Zhukova failed to turn her match around and instead took a draw in a worse position, but elsewhere the story was of unlikely escapes for the favourites as the pressure grew. For instance, the computer put Mona Khaled at over a 5 pawns advantage with White here - and she only needed a draw!

That was after 32.Rc2, but 32.Nh6 followed in the game. It was an extremely complicated position and therefore less of a surprise than the computer evaluations indicated when Nana Dzagnidze eventually managed to win and force tiebreaks. 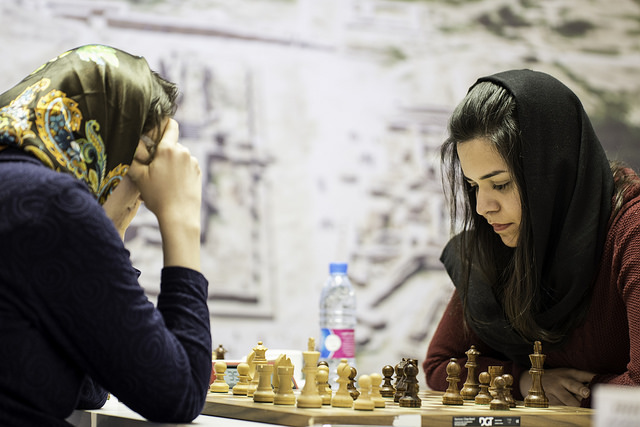 Sopiko Guramishvili seemed well on the way to a draw that would take her to Round 2 when she swapped off queens on move 8, and subsequent play only reinforced that impression. Somehow, however, Khademalsharieh managed to squeeze a win out of nowhere and level that match as well. There was no subtle positional plot to how Anastasia Bodnaruk made up for her blunder in the first game:

29.Rf6! won on the spot. Black has no choice but to give up the queen, since otherwise taking twice on h6 will be checkmate. 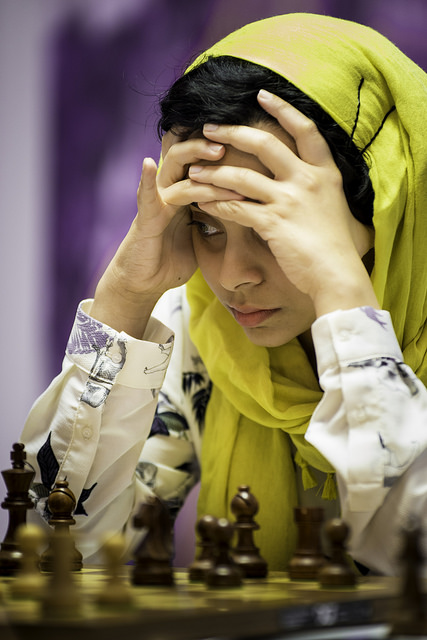 One final hard luck story… Lela Javakhishvili from Georgia had had a winning position for the last 20 or so moves when Le Thao Nguyen dared to grab a pawn with 62…Qxb4:

That should finally have been game over, since after 63.Bf6+! Nxf6 64.exf6 the absence of the black queen means there’s no good way to stave off mate. Instead after 63.Bh5? Qf8! Black was surprisingly holding everything together, while soon afterwards the Vietnamese player took over and pushed her passed c-pawn to victory and a place in Round 2. 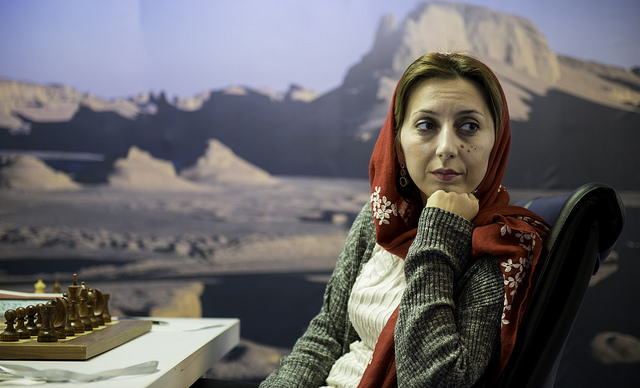 Lela Javakhishvili was an early knockout victim. The only consolation is that all but one player will taste defeat in Tehran | photo: David Llada, official website

The 11 tiebreaks will all consist of at least two 25 min + 10 sec rapid games, though they could potentially stretch to seven games, with two 10 + 10 games, then two 5 + 3 and finally Armageddon, where White has 5 minutes to Black’s 4 but a draw will take the player with the black pieces into the next round. 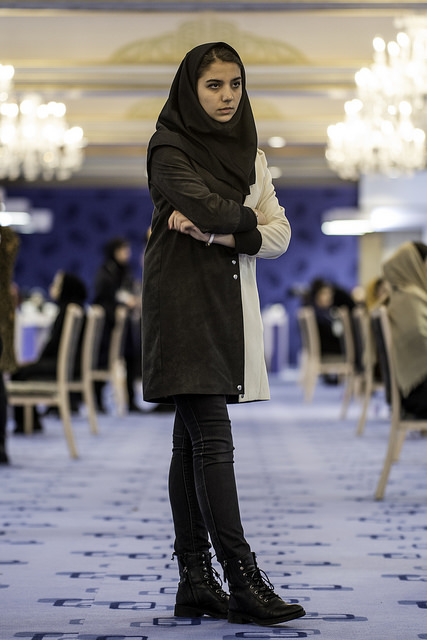