Ding Liren got revenge for the first game of the World Cup semifinal by torturing Wesley So with the white pieces until a draw was finally reached with only bare kings left on the board on move 58. That means they play tiebreaks on Thursday for a place both in the final and in the 2018 Candidates Tournament. Levon Aronian and Maxime Vachier-Lagrave are in the same boat, though they’ll barely be warmed up after playing out an even quicker draw than the day before. In fact Levon didn’t need more than 9 seconds for any of his 18 moves, despite playing with the black pieces.

It was Wesley So's turn to sit at the board and suffer on Wednesday! | photo: Anastasia Karlovich, official website

You can play through all the games from Tbilisi using the selector below. Click on a result to open the game with computer analysis or hover over a player's name to see all his or her results:

MVL ½-½ Aronian: Blink and you missed it 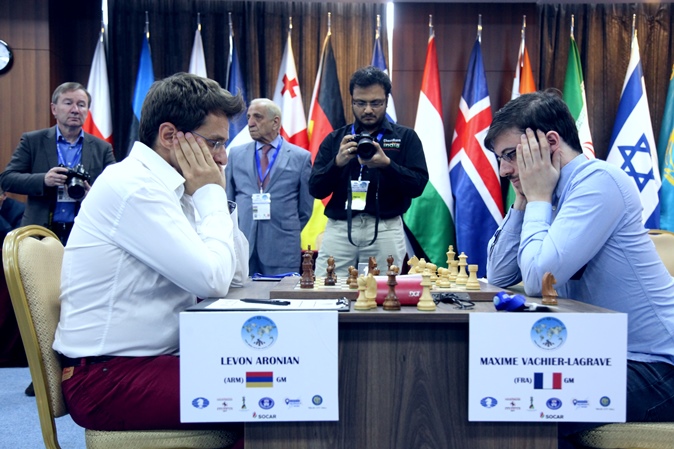 The photographers had to rush to capture the game! | photo: Anastasia Karlovich, official website

The expected narrative of this game was that Maxime Vachier-Lagrave would press for a win with the white pieces after Levon Aronian had blown his opportunity the day before. Instead, though, all it took was one surprise in the Ruy Lopez for Maxime to shut things down and put his hopes in tiebreaks.

If you check out the Database tab under our live boards and sort by rating you'll see the likes of Mickey Adams, Pavel Eljanov, Evgeny Tomashevsky, Gata Kamsky and Alexander Morozevich have played this position with Black. The top players to have tried 12…Nxd5, as played by Aronian? Zoltan Hajnal, Marina Guseva, Francisco Olivares, Paulius Pultinevicius and Lidia Tomnikova... 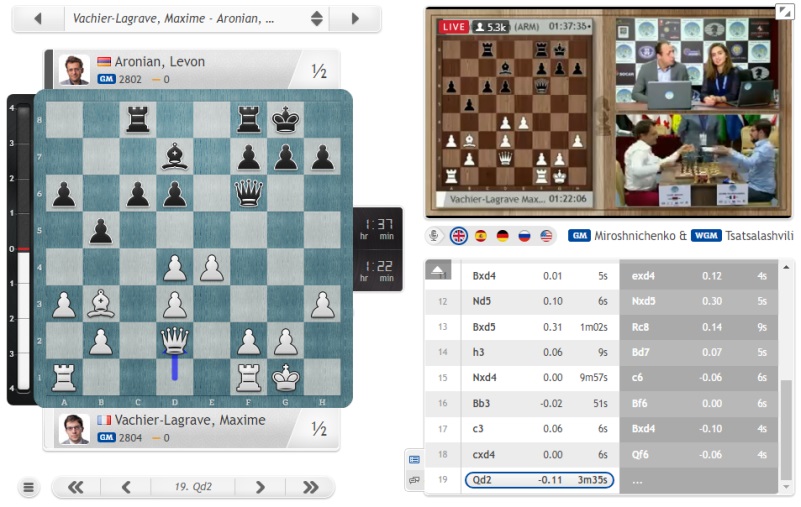 Not a classic classical match between these two great players, then, but it means we get to enjoy an enthralling tiebreak tomorrow. 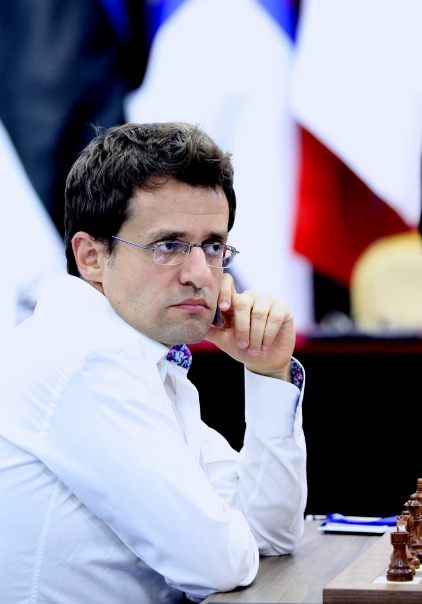 In the first game between these two Wesley So had an almost overwhelming position with White from the early middlegame onwards and then missed a win in the ending. The same scenario unfolded in Game 2, except that it was Ding Liren who was better and, as he noted, the advantage was, “maybe not as large as yesterday”, while at a glance the potential “win” is also much less clear. 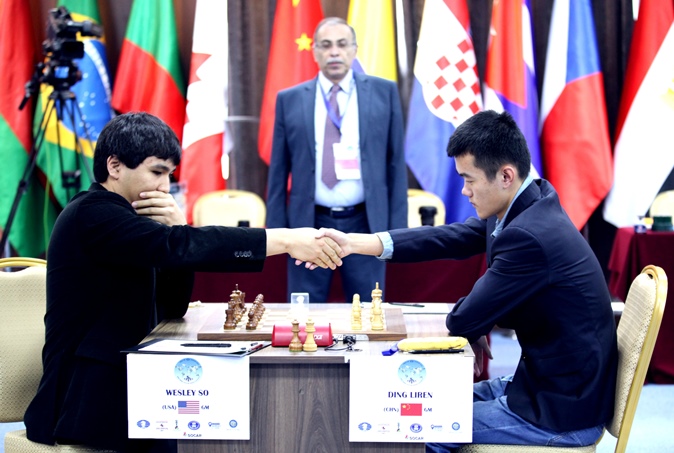 The start of a slow but intense battle | photo: Anastasia Karlovich, official website

First things first, though, since this game also featured an opening surprise. In the Catalan position after 9…c5 Ding Liren found a move not played in 203 previous games:

10.Ne1!? Wesley took 11 minutes to respond 10…cxd4 and although he was soon playing faster than Liren he found himself in a tough position when he offered a queen trade with 17…Qb8:

Yasser Seirawan felt the Chinese star had very good winning chances and said that as Black you’d be crying here if Swedish endgame wizard Ulf Andersson was sitting opposite you. Ding Liren himself commented that he had “a dream Catalan position”, but also added, “I think I played well until the queens were off the board”. 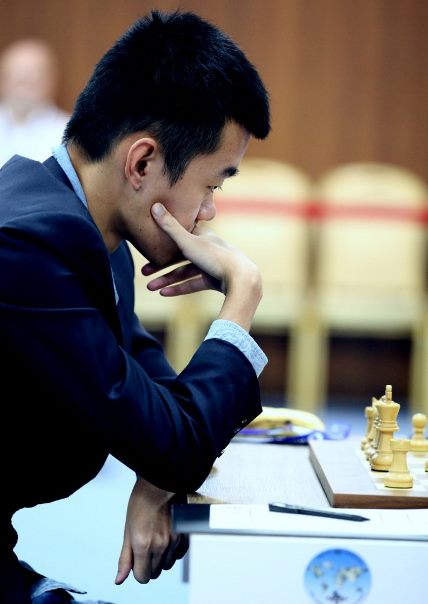 Ding Liren had already won a positional masterpiece against Wang Hao in Tbilisi, but he couldn't quite do the same against Wesley So | photo: Anastasia Karlovich, official website

Yasser felt there was no reason for White to rush to exchange on b8 here, as Liren did, but despite being somewhat critical of his own play it seems the Chinese no. 1 kept making progress and had interesting chances to break through such as 31.f5!?. In the game the key moment, unlike the day before, came just the wrong side of the time control, when Liren was down to his last minutes and Wesley played 36…Nb6!? – a move that ultimately secured the draw:

Black must play the only move 39…f5 and then it seems 40.Rb8! forces Black to give back the piece (40…Nd5+ looks like a simple refutation from a distance, but 41.Kd4! hits the c5-rook and the black king doesn’t have the tempo it needs to get out of the mating net).

When the dust settles after e.g. 40…Rc8 41.Rhxc8 Nxc8 42.Rxc8 material is suddenly equal again, and although White has all the trumps it’s still not clear if the position would be won, especially against a player with as fantastic technique as Wesley’s.

When asked about 37.Rh8 after the game Ding Liren merely queried what would happen after Black took his knight on c5...

Meanwhile, back in the game, it was still sharp and White had some chances, but So wasn’t going to let the draw slip now and confidently brought the game to its conclusion:

There are many ways to draw, but 54…f6! was the most elegant, with no way to queen the remaining white pawn after everything is exchanged on f6. Fittingly, after two fierce games, the players played on until bare kings: 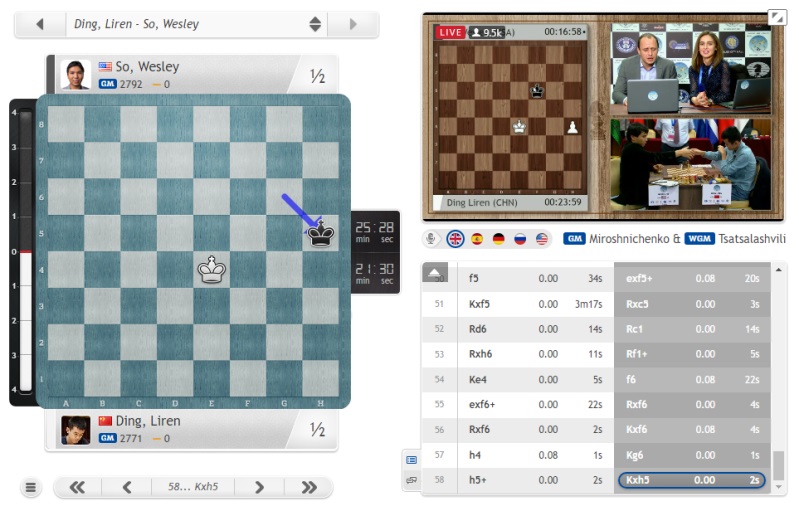 Wesley So survived the toughest of tests, just as he had earlier in the tournament against Baadur Jobava | photo: Anastasia Karlovich, official website

Needless to say, the tiebreaks will be unmissable, since by the end of them we’ll know not only the finalists for the 2017 World Cup but two of the players in the 2018 Candidates Tournament. Catch all the action live here on chess24 from 13:00 CEST onwards on Thursday. You can also follow the games in our free mobile apps: