Levon Aronian rejected a position with two extra pawns against Ding Liren as the first game of the Tbilisi World Cup ended in a draw in 35 moves. That means there’s going to be no repeat of the extraordinary 2015 final when Sergey Karjakin beat Peter Svidler in a match where all ten games were decisive. Peter was on hand this time round as well, joining Jan Gustafsson for an hour to talk partly about today's game but mainly about how his own World Cup went. 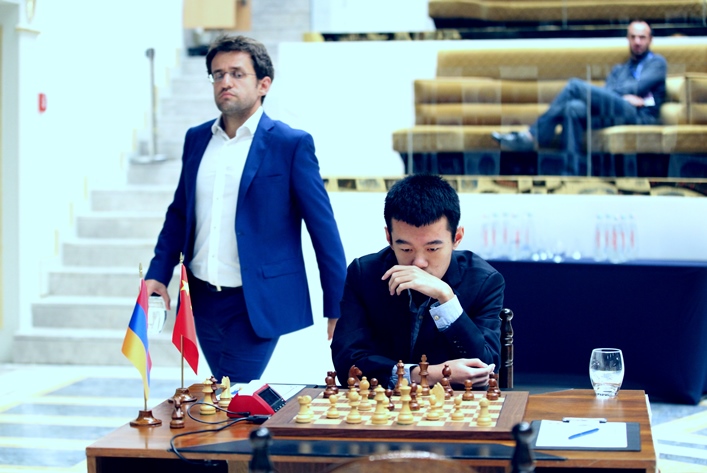 You can replay all the games from the Tbilisi World Cup using the selector below: click on a result to open the game with computer analysis or hover over a player’s name to see all his or her results:

By the time the World Cup reaches the final a lot of the excitement has gone. Of course the crowds of players milling around are a distant memory, but the tension of the chase for a place in the 2018 Candidates Tournament is also over. Both Ding Liren and Levon Aronian will play in Berlin in 2018, so what’s left to play for is money and prestige. The final consists of double the number of games in the previous rounds, before potential tiebreaks, so it’s good that there are some factors to liven up events:

Aronian-Ding Liren was a pairing few could have predicted. In fact, we can quantify that! Just 17 out of 1415 predictions submitted for our World Cup bracket at Challonge managed:

At a glance you would assume Levon Aronian is the big favourite to win the final match. At 2802 and world no. 4 he’s significantly higher rated than Ding Liren at 2771 and world no. 13, plus he also has the experience of handling such top level events. This year he’s won the GRENKE Chess Classic, Altibox Norway Chess and the St. Louis Rapid and Blitz, while he’s also won the World Cup before, back in 2005. 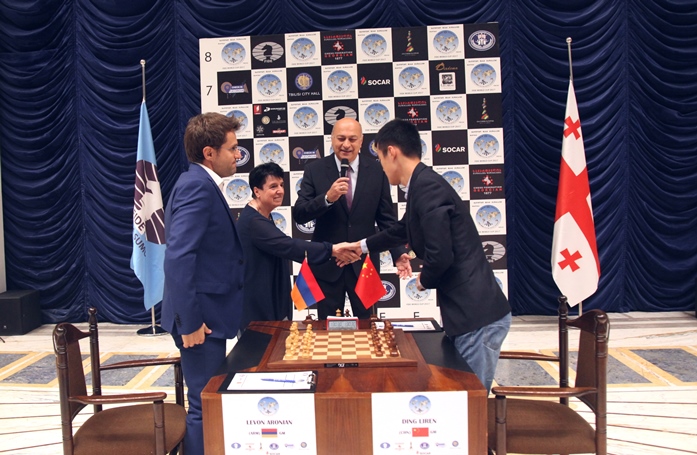 So we can expect a very close and hard-fought match. 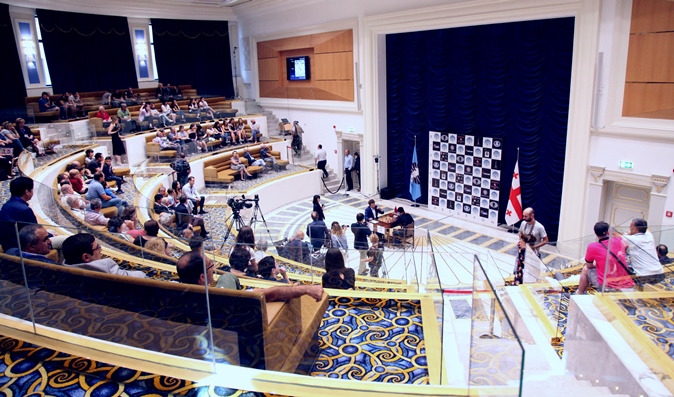 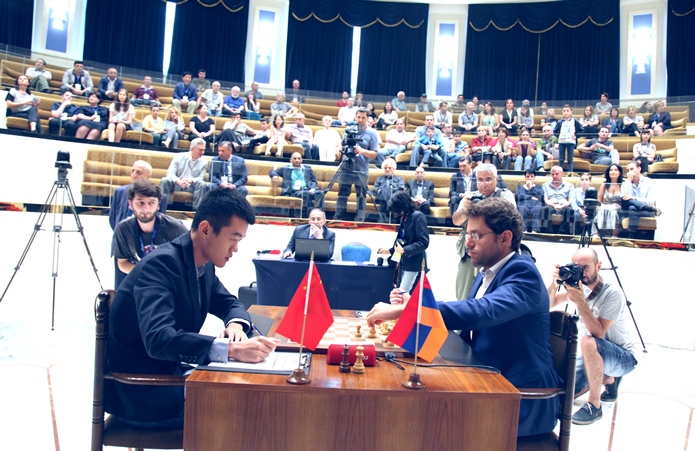 The view from the stage | photo: Anastasia Karlovich, official website

If there’s nothing that can be done about only having two players the surroundings can at least change a little! After 20 days on the far outskirts of Tbilisi the action has moved to the Biltmore Hotel bang in the centre of the city. It doesn’t look bad, and includes a chess table that drew attention:

It’s always difficult playing on a board where there are spectators because you don’t want to make a short draw. You want to fight, so there is extra responsibility!

Peter Svidler joined Jan Gustafsson’s German live commentary on the first game of the semifinal and, luckily for us, spoke English not German! He talked about his experience of making it to the quarterfinals only to fall to Maxime Vachier-Lagrave, how the World Cup compares to other chess events, his pre-tournament injury ("it requires skill and dedication to your task!") and what he thinks about the random pairing system used for the first round on the Isle of Man. He also briefly touched on the Aronian-Ding Liren game, though by the point he joined it was just ending.

You can rewatch Peter's 55-minute appearance below - apologies for some technical issues with the connection from St. Petersburg:

The game itself wasn’t a thriller. Levon said he was surprised by Ding Liren’s 7…d4:

That was played by Hikaru Nakamura against Veselin Topalov in the Paris Grand Prix, and also by Ding Liren’s compatriot and the women’s world no. 2 Ju Wenjun in a victory over Aleksandr Shimanov just 10 days ago in the Fall Chess Classic in St. Louis.

Ding Liren was asked to dress up for the final, and did, up to a point! | photo: Anastasia Karlovich, official website

Levon has a dress code all of his own! | photo: Anastasia Karlovich, official website

Levon commented, “I wasn’t expecting this 7…d4 and my reaction was a safe one, but I knew that there was nothing and Black can play any way”. Aronian followed Shimanov’s 9.Bc4, while Ding Liren’s 9…Bd5 instead of 9…Be7 was a novelty. The subsequent play was tense and it was hard to tell which side had an advantage, or even the initiative, until the critical moment arose after 28…b5:

After 7 minutes’ thought Levon played 29.Kg2 Nc6 30.Rb1 and had no advantage until moves were repeated and a draw was reached on move 35. His plan had been to play another move:

I had the feeling that after 28…b5 29.f5 I should be better, but then after careful consideration I realised that it leads to a draw. Then I thought to try something else, but Black is too active.

Maybe Black can just ignore it and play 35…Rf2. If I just retreat my pieces then he’s too active, that’s what I thought. I should have done it anyway. Why play b4 if you’re not going to play f5? But I felt that maybe I’ll be in time to bring my king. It was an oversight.

You can watch the full interview with Levon below:

That means Ding Liren becomes a slight favourite with two Whites in the remaining three classical games, but it's absolutely all to play for. You can again watch the game with commentary in multiple languages and streams live here on chess24 from 13:00 CEST onwards on Sunday.