Only a single game finished drawn in the fifth round of the Tata Steel Masters, and even that was a spectacular miniature between Nakamura and Karjakin. Elsewhere Aronian continues to lead after beating Harikrishna, but Giri, So, Dominguez and Caruana also won to remain within striking distance. Jobava and Saric lead the Challengers on 5/6, and chess24’s Rustam Kasimdzhanov takes a look at Jobava’s crushing win against top seed Wojtaszek.

A tale of three “novelties”

The Masters players had a rest day to recover from their museum trip to Amsterdam, and were clearly in a mood to fight. The first game to finish was one of the key encounters of the round. Hikaru Nakamura sprung a near novelty with 13.Ke2 (Magnus Carlsen and Michael Adams had both played 13.Nd2 against Alexander Morozevich), although when he was told about it after the game the American suggested it was an accidental one:


Then clearly I just forgot my preparation.

True or not, despite both players burning time to find something better (see the screenshot with the time usage shown in our chess24 broadcast software) a few moves later the game ended in an attractive and logical draw, with 19...Rxe3+ in this position opening up the white king to perpetual checks. 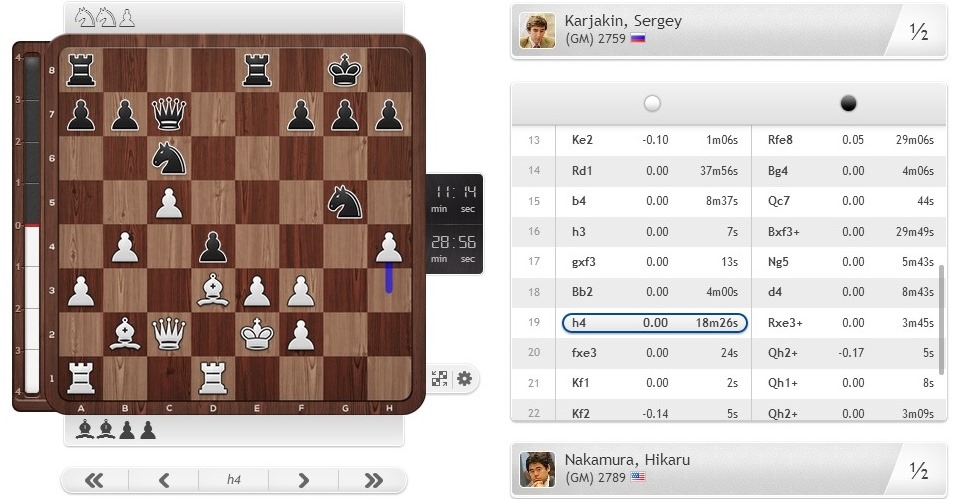 Wesley So also wasn’t too impressed with his own near novelty of 8.Qd2, which he said he found at the board against Boris Gelfand. His Israeli opponent has been in abject form, however, and it seems his usual dynamic style has deserted him. A few passive moves in a row saw his position crumble until he resigned on move 29 with material still level:

Wesley So was asked afterwards if the resignation was premature, but smiled when remarking, “his final position wasn’t very good.” That may be something of an understatement, as Black has no defence against the simple a6 and Rxb7.

The most spectacular opening surprise of the round, however, was young Hungarian Richard Rapport’s 3.g4 against the experienced Cuban Leinier Dominguez. Such daredevil early pawn pushes in front of your king have become commonplace since computers overturned decades of chess wisdom, but managing it on move 3 still makes an impression.

Dominguez spent around 50 minutes on his first six moves and concluded the move wasn't as bad as it looked, but Rapport’s experiment eventually backfired in dramatic fashion.


After the following brilliant bishop sacrifice it was never going to be his day:

19... ♗xe2 20. ♔d2 Played after 11 minutes of bitter reflection... From this point on neither player makes any serious mistakes.

20. ♖xe2 wouldn't have worked out any better either: 20... ♕g4! The same response as in the game, threatening both the bishop and winning the b1-rook with a queen check on g1. 21. ♗h2 ♘f5! 22. ♖b2 ♕g2 Not the only winning move, but the one that best emphasises the hopelessness of White's position. 23. ♗e5 Otherwise the queen can simply take the bishop. 23... ♖xe5 24. ♖xe5 ♕g3+ Black picks up the rook on e5, with a crushing advantage.

A delighted Dominguez described how the game went, and how he felt on seeing 3.g4: 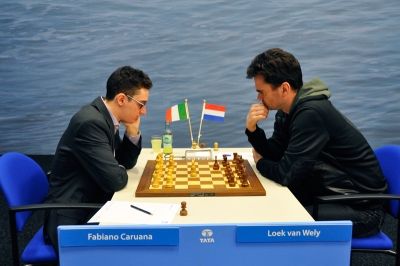 Caruana: "I seem to be alternating quite a bit win and lose, but so far it’s not so bad... although of course I should try to improve my play a bit" | photo: official website

The other three wins looked like triumphs of endgame technique, but the players were modesty personified.

Caruana played a super-solid opening against Van Wely’s Sveshnikov Sicilian and then took advantage of his opponent sacrificing (or blundering - he wasn’t sure which) a pawn. After losing a marathon bishop ending the round before he was on the right side this time. The Italian star is yet to draw a game, but with 3 wins and 2 losses is still within touching distance of the leaders.

Anish Giri is having a good tournament and outplayed Pentala Harikrishna in Carlsenesque fashion. He was less impressed with the way he converted the rook ending into a win, however, lamenting that he "missed a few very important details".

World no. 2 Levon Aronian is another man in form and is both topping the table and edging towards Magnus Carlsen on the rating list. On Friday he managed to bamboozle Germany’s Arkadij Naiditsch in an ending that looked destined for a draw, provoking resignation with an elegant finesse:

57…Rd2! ended the struggle - if White captures the bishop one of Black's pawns will queen, but if Black gets to play ...Rd1 next the same outcome is inevitable.

Aronian attributed his success to his opponent's mistakes and luck (don't take his word for it!), claiming "my only chance to win a game like this was to play fast and put him under pressure":

Tata Steel Masters standings after Round 5

While the Masters’ participants have the luxury of multiple rest days this year the Challenger players are sticking to the old tough schedule and played two more rounds since our last report.

The key game of Round 5 saw Baadur Jobava strike a crushing blow to top seed Radek Wojtaszek’s winning chances. GM Rustam Kasimdzhanov takes a look at what went wrong for the Polish grandmaster - his colleague as a member of Viswanathan Anand's team for three World Championship matches:

1. d4 ♘f6 2. c4 e5! That's the spirit! In Wijk this opening has had a dream career, bringing down Gelfand and Wojtaszek. It's maybe not the most solid choice, but it gets the job done :)

13... c6 14. h5 f5 15. h6 ♗f6 16. ♕d2 ♕e7 Don't let your computer fool you - humanly speaking White has basically run out of good moves - and castling short simply loses the h6-pawn. The remedy which Radek found can only be explained by the unbearable stress of being a World Champion's second for many years.

17. f4? White weakens his position in an attempt to dislodge the knight from e5. Ironically, he doesn't even achieve that...

19... ♖ad8‼ Extremely artistic play - and a moment worthy of Clint Eastwood. Even at gun-point I won't retreat my knight :)

Wojtaszek bounced back in Round 6 with the day’s quickest win against Merijn van Delft, but Ivan Saric has emerged as Jobava’s strongest rival after successive wins against tail-enders Etienne Goudriaan and Jan-Krzystof Duda. 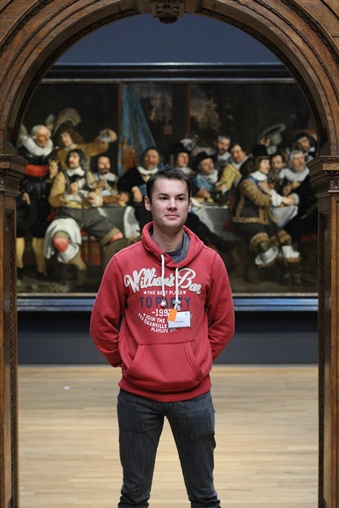 Tata Steel Challengers standings after Round 6