Magnus Carlsen takes on his Fischer Random conqueror Wesley So as the penultimate stage of the 2019 Grand Chess Tour starts in Kolkata, India on Friday. The real battle in the National Library of India will be to qualify for the $350,000 GCT finals in London next month, with Vishy Anand, Levon Aronian, Wesley So and Ian Nepomniachtchi fighting to join Magnus and almost certainly Ding Liren in that four-player event. 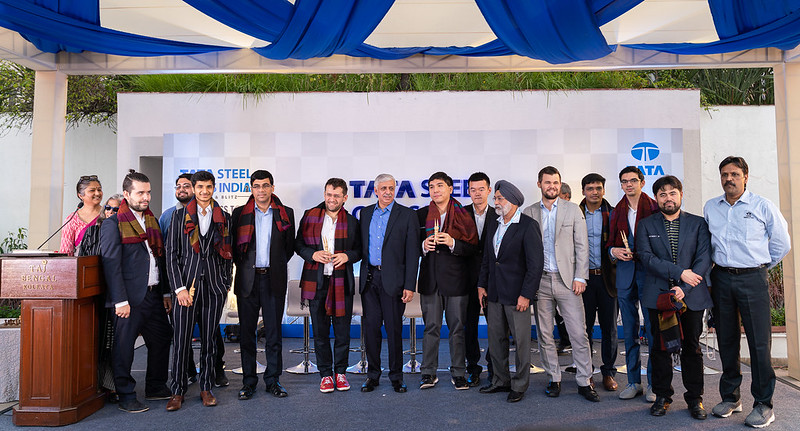 The 10 Tata Steel Chess India players at the opening ceremony - whatever happens in the chess Vidit has already made an impression with his suit... | photo: Lennart Ootes, Grand Chess Tour

The final regular tournament of the 2019 Grand Chess Tour is the Tata Steel Rapid & Blitz that takes place in the National Library of India in Kolkata (formerly Calcutta) from Friday to Tuesday, with the action starting at 14:00 local time. That's 09:30 CET in Central Europe or 02:30 (!) in Saint Louis, from where Peter Svidler, Jennifer Shahade and Maurice Ashley will be commentating during the middle of the night.

Indian IM Tania Sachdev will be on location in Kolkata:

The format is the familiar one of three days of rapid chess (3 rounds a day at 25 min + a 10-sec delay) followed by two days of blitz (9 rounds a day at 5+3). You can already check out all the pairings below:

This is one of the strongest events ever held in India, with World Champion Magnus Carlsen topping a field that includes five players from the classical and rapid Top 10s or six if you take the blitz rating list. 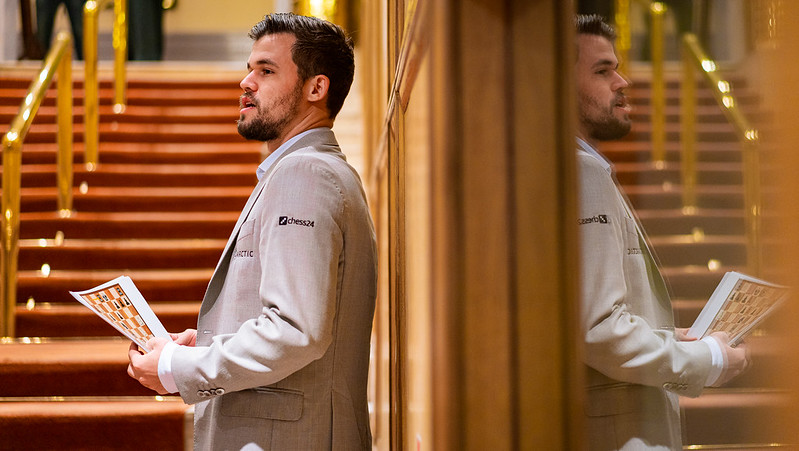 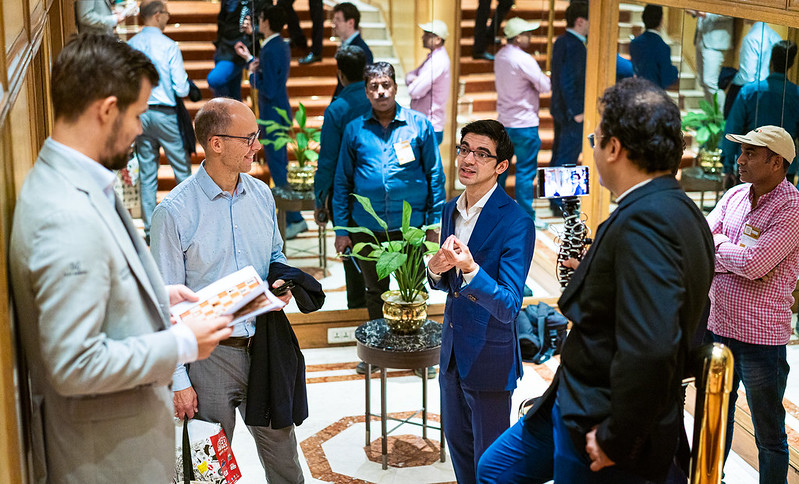 ...though some last-minute advice from Anish Giri can never do any harm | photo: Lennart Ootes, Grand Chess Tour

Magnus starts as “only” the world no. 2 (to MVL) in rapid and the no. 5 in blitz (behind Nakamura, Ding Liren, Karjakin and Nepomniachtchi), and will be looking to put that right! He also has the memory of how he suffered in the St. Louis Rapid & Blitz and then in the Fischer Random World Championship. As he said at the end of his latest Banter Blitz session on chess24:

Now I will be off to India pretty soon to try and atone for my terrible performance in the St. Louis Rapid and Blitz, not to speak of the rapid Fischer Random against Wesley So, which was atrocious as well.

The main intrigue in Kolkata doesn’t surround Magnus directly, however, since he’s the one player already mathematically certain of playing for the $150,000 Grand Chess Tour first prize in the finals in London next month. He can’t even be caught by Ding Liren: 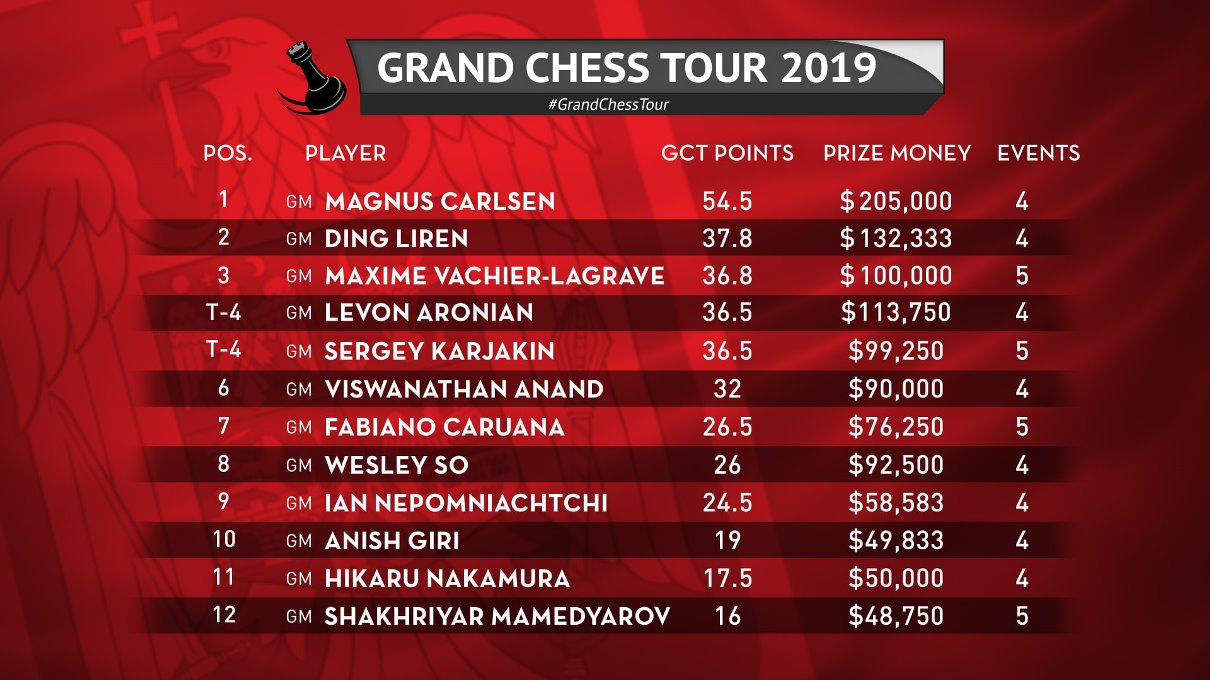 Ding is also essentially through. Even if he finished last (gaining 1 point) in Kolkata, he would only not make the finals if Wesley So finished clear first (13 points take him to 39, 0.2 points above Ding), Anand took 4th or better and Aronian was at least 8th. 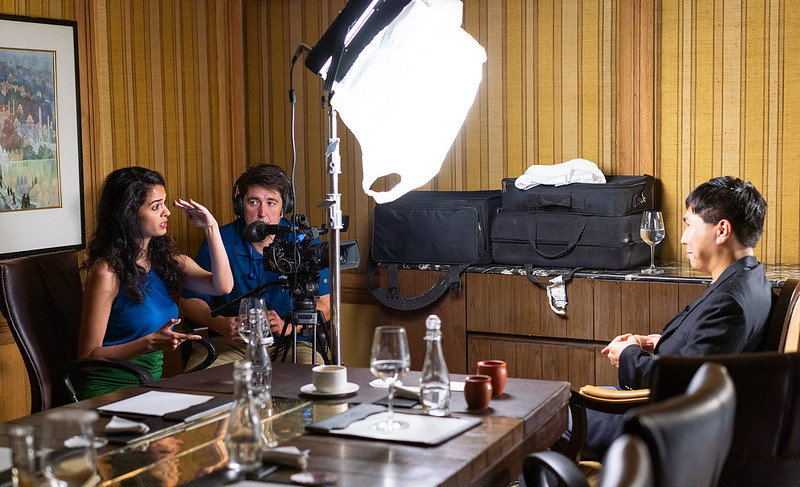 Wesley So would need to win the event and keep his fingers crossed | photo: Lennart Ootes, Grand Chess Tour

The real question is who will join Magnus and Liren. Levon Aronian will overtake MVL (who has already played all 5 of his events) even if he finishes last, so that to have any chance of reaching London MVL’s 36.8 is the score to beat. That can be done by Vishy Anand (6th or better), Wesley So (at least 1st after tiebreaks) or Ian Nepomniachtchi (only clear 1st will do). As you can see, Wesley and Ian have a mountain to climb, and even if they climbed it they’d need some help from Vishy! 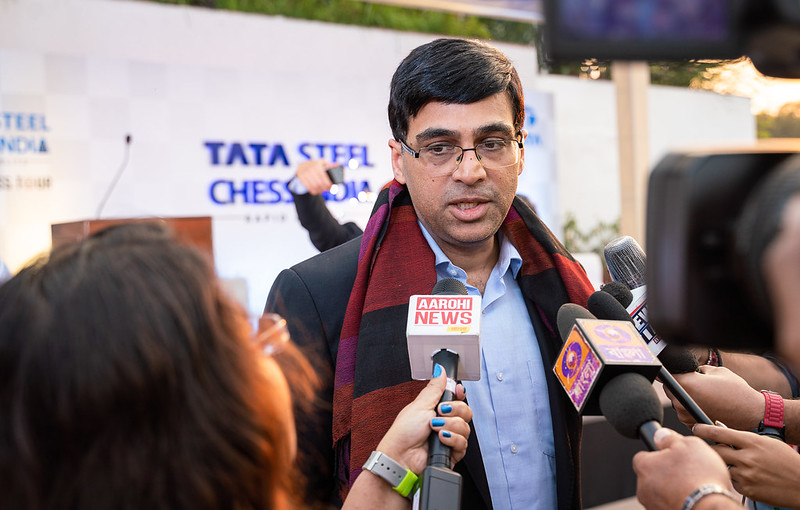 Vishy Anand will of course be the focus of much of the media coverage in Kolkata | photo: Lennart Ootes, Grand Chess Tour

For the other players, including local wild cards Harikrishna and Vidit, there’s still the $37,500 top prize at stake, but they can also afford to relax and enjoy the experience of playing chess in India. We got to see that things are a little different in Kolkata as Hikaru Nakamura and Ding Liren visited the “Gariahat Chess Club”, which is located under a flyover on one of the city’s busiest streets! 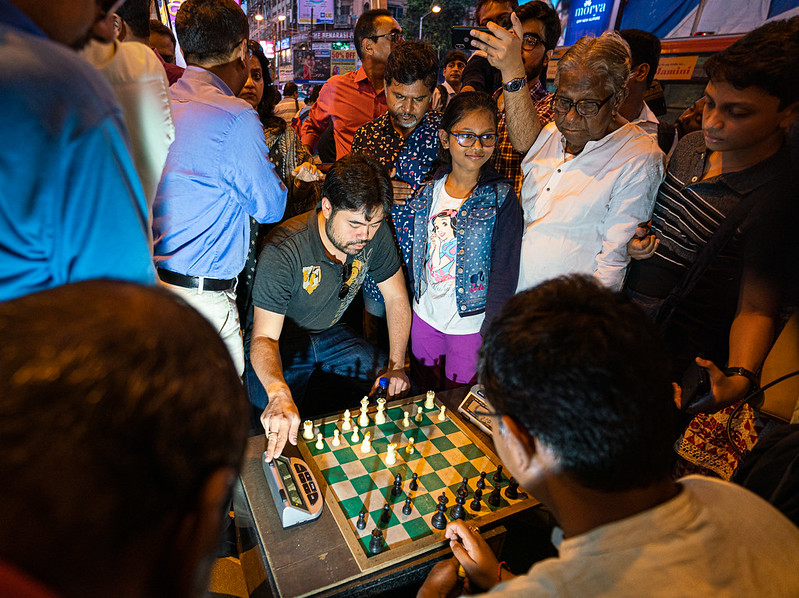 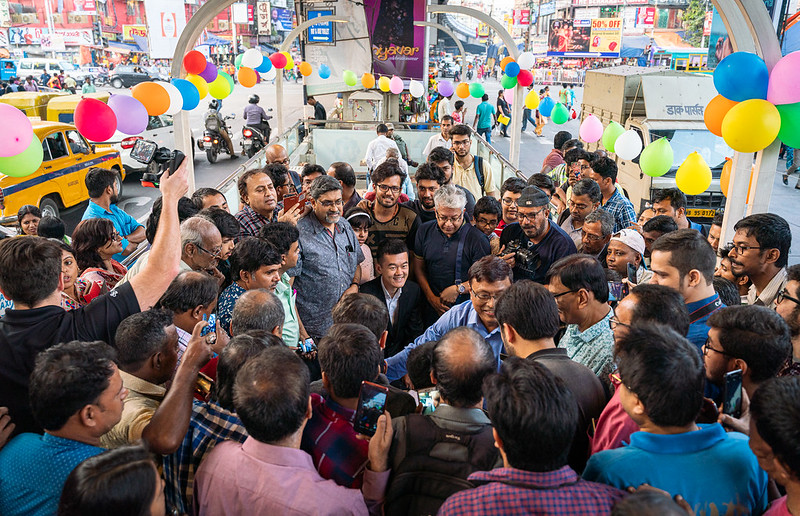 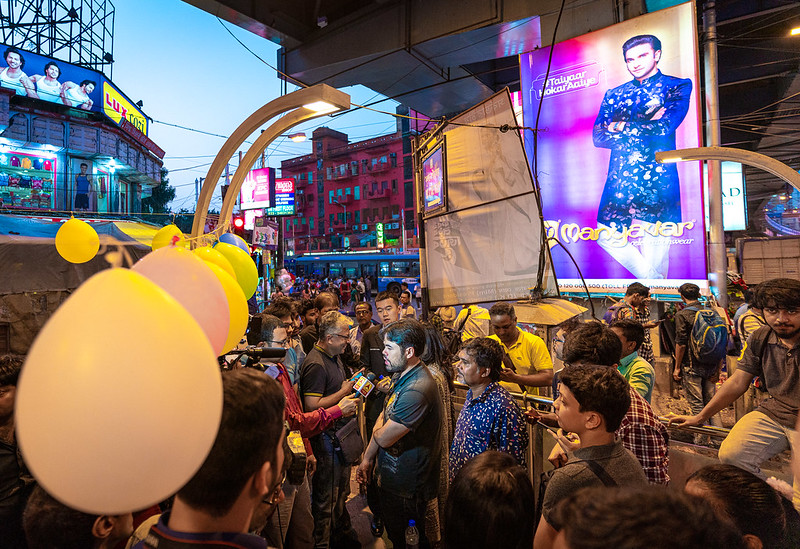 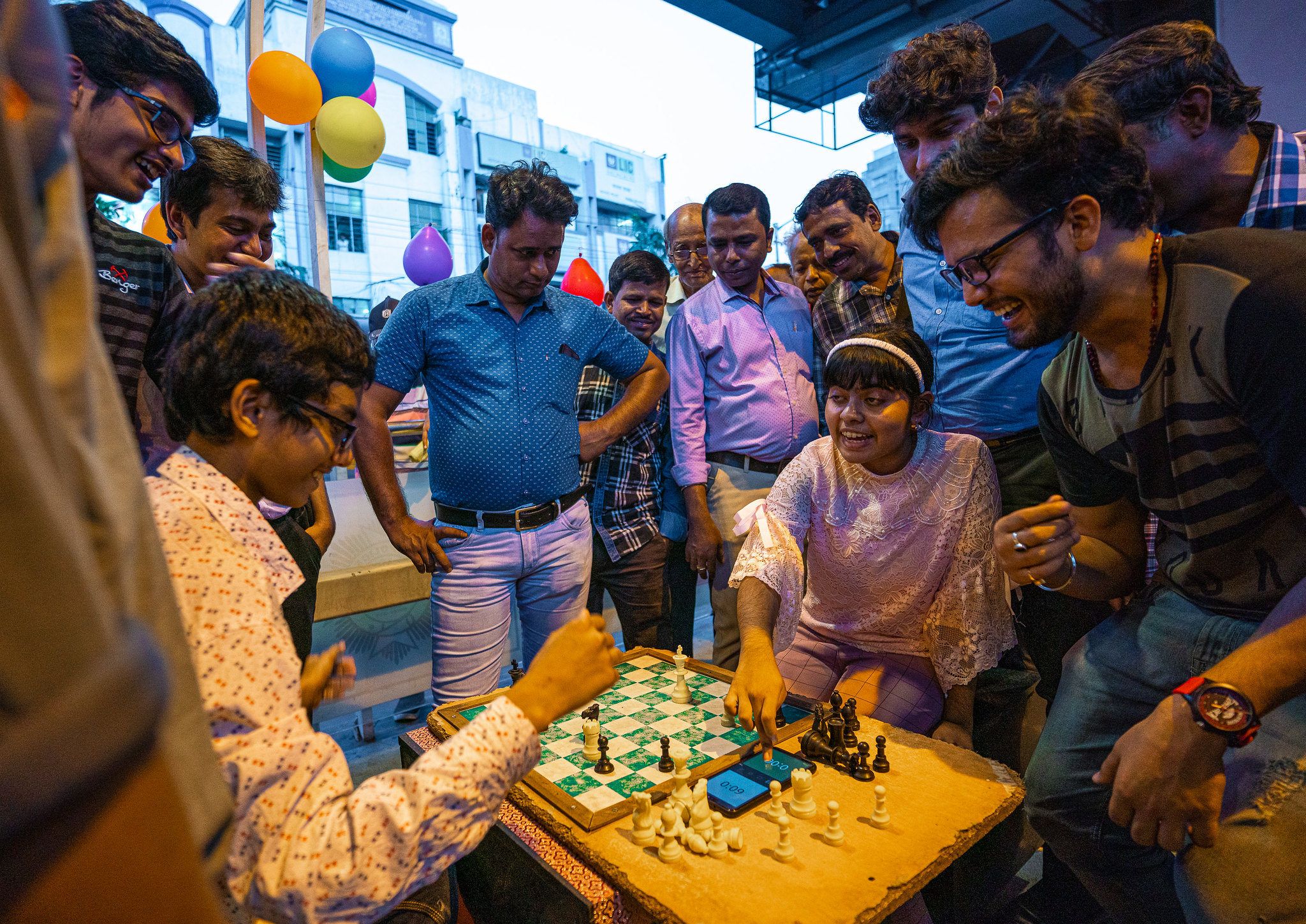 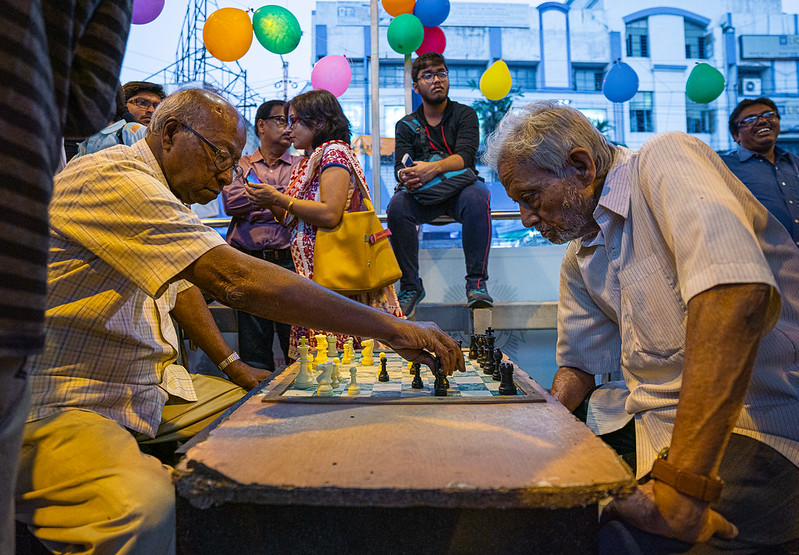 And if you want an idea of how it sounds while playing chess on the streets of Kolkata:

Nakamura was quoted as saying:

This is so extraordinarily amazing that you have to come here to believe it. If the game is to be made to catch public imagination, I believe this is one way to reach the common people.

Anish Giri and Harikrishna went to the more traditional Alekhine Chess Club, but found a no less enthusiastic welcome. 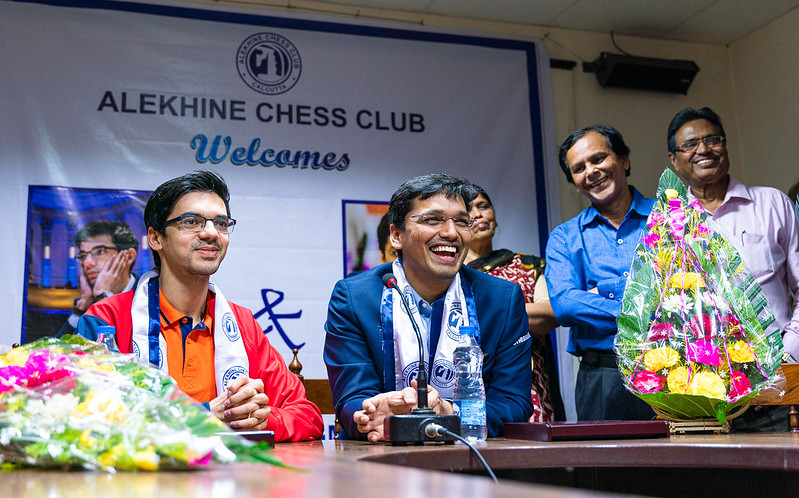 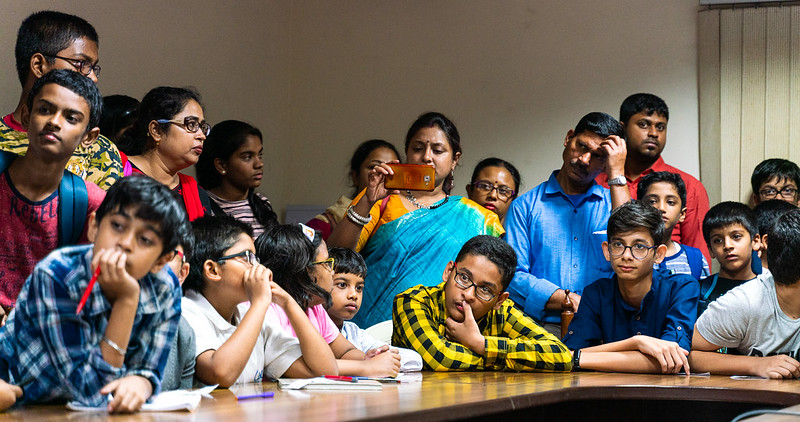 ...which in this case was mainly some chess kids. Indian schoolkids are the new Soviet schoolkids when it comes to chess - underestimate them at your peril! | photo: Lennart Ootes, Grand Chess Tour

Of course Anish and friends were also busy on social media!

So what can we expect once the chess begins? Well, as Magnus said in a short interview from Kolkata:

I’ve been very happy with the reception so far, but I’ve been warned that once play starts it’s going to get a lot more intense, so I’m both looking forward to that and a little petrified as well!

This time round Praggnanandhaa and Nihal Sarin aren’t in action, but they were both mentioned by Magnus as players who might follow in Vishy Anand’s footsteps. He added, however: 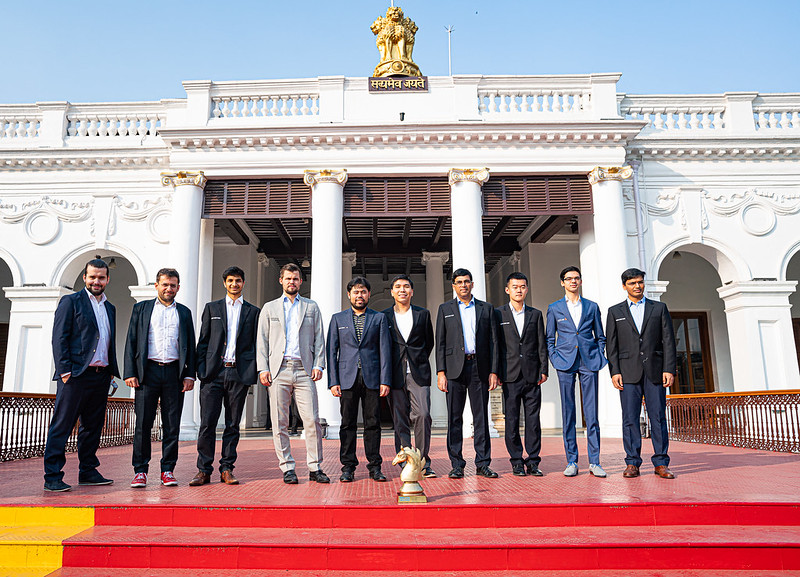 The players in front of the prize | photo: Lennart Ootes, Grand Chess Tour 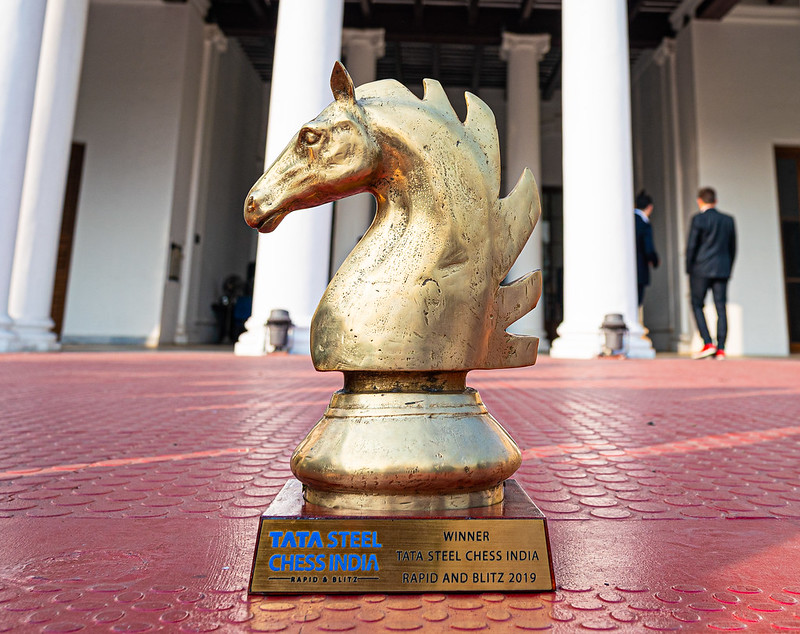 The Tata Steel India Rapid & Blitz starts at 09:30 CET and you can watch it LIVE here on chess24 with commentary in English and Russian!