Magnus Carlsen is again the rapid world no. 1 after wins over Hikaru Nakamura and Anish Giri saw him take a 3-point lead after Day 2 of the Tata Steel Chess India Rapid & Blitz in Kolkata. Wesley So was the only other player to win two games as he joined Hikaru in 2nd place, while Ian Nepomniachtchi’s hopes of qualifying for London have gone after another two painful losses. Elsewhere there were mixed fortunes, with no less than six players both winning and losing games. 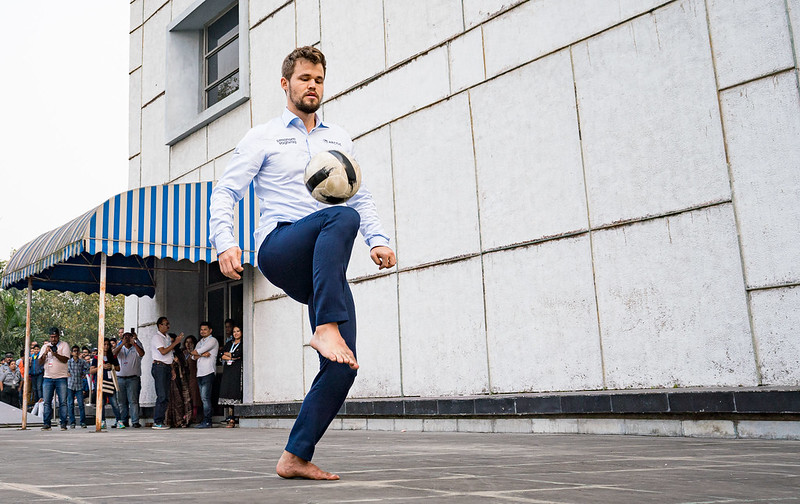 You can replay all the Tata Steel Chess India Rapid & Blitz games using the selector below:

And here’s the day’s live commentary:

The winners: Magnus Carlsen and Wesley So 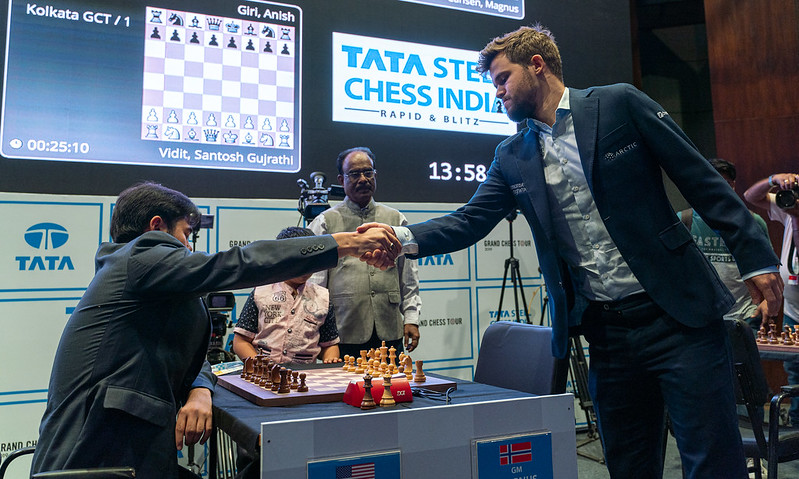 It wasn’t a day on which it felt as though Magnus Carlsen needed much help, but he got some in the very first game when Hikaru Nakamura went for 6…Nf4?!

The only explanation Magnus could come up with for that “very, very strange” move was that Hikaru was hoping for 7.Nxe5 Nxg2+, when Black may get compensation, but after the simple 7.Bxf4 exf4 8.d4 the white central pawns went on to become monsters.

Things didn’t go as smoothly as it seemed they would, however, and after, for instance, 28…Ba7, you can see why Magnus quoted what he described as a Russian saying that, “even the worst pair of bishops is still better than the best pair of knights!”

White’s advantage was never entirely extinguished, however, and Magnus eventually went on to win in 51 moves. 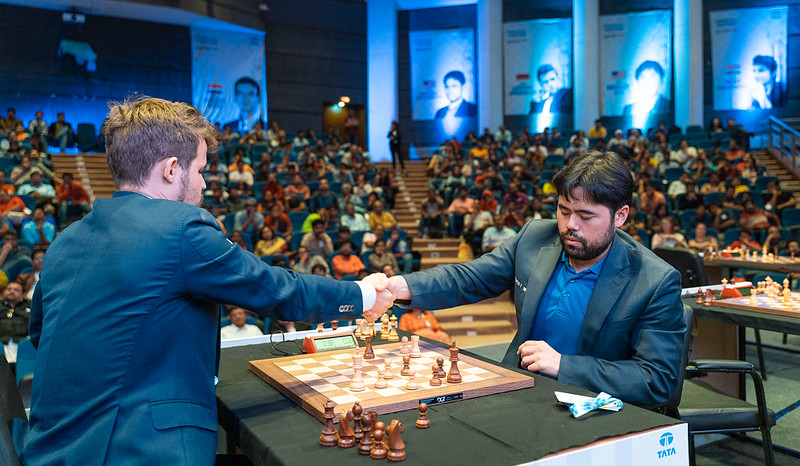 When Tania Sachdev noted that Magnus had won the World Championship in India six years ago, he responded "Much like 6 years ago it's going swimmingly - pun intended!", a reference to how his team had thrown him in the swimming pool.

An impressed Peter Svidler followed that up with:

It’s slightly unfair that he’s become so good at the media game as well! 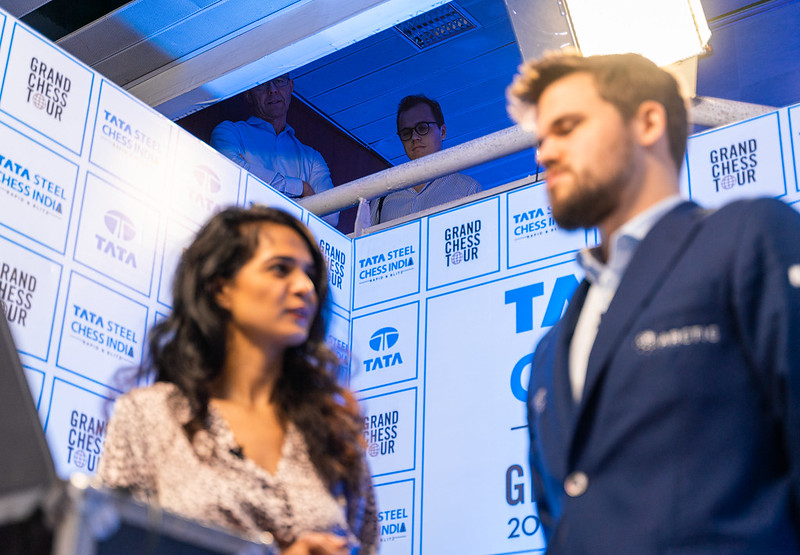 Up next was outplaying Anish Giri on the black side of a Sicilian Rossolimo, with a far-advanced white pawn on e6 eventually proving a liability rather than a strength. The game ended with a nice pawn endgame:

Svidler here explained how important it was for Black to keep the queenside alive with 44…a4!, since after 44…axb4 45.axb4 the white b-pawn will be exchanged for Black’s d-pawn and the position would be a dead draw. As it was Magnus went on to win smoothly:

In this final position it would only be a draw if it was Magnus to move, but as it’s Giri to move he had nothing better than to resign.

That made it four wins in a row:

And Magnus was now back to world no. 1 on the live rapid list (this is the list at the end of the day):

By this stage he probably felt he could do no wrong, even when it came to football!

The game against Vidit was a small reality check, however, as Magnus probably hoped to surprise his Indian opponent with the Tarrasch Defence but only quickly ended up a pawn down. He nevertheless held a draw with some ease, and that turned out to be enough to give him a 3-point lead: 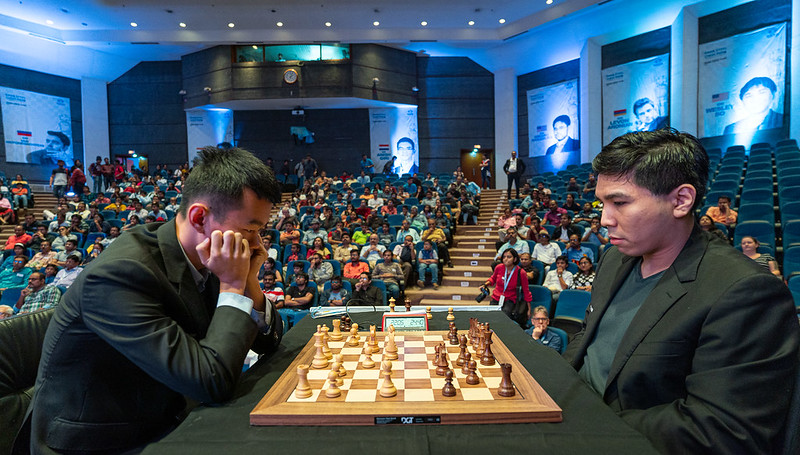 Wesley So began by beating Ding and was the only player to match Magnus on Day 2 | photo: Lennart Ootes, Grand Chess Tour

Wesley So could have cut that lead to 2 points if he’d beaten Ian Nepomniachtchi in the final game of the day, but instead he saw some ghosts and offered a draw in a promising position. He may not have wanted to risk spoiling what had gone before, since he started the day with two wins. In one he outfoxed Vidit in a queen ending, while in the other he got a gift from an unlikely source – Ding Liren! The Chinese no. 1 has just played 37.Re8?

Only one player lost two games on the second day and, as mentioned, it could easily have been worse for Nepo if Wesley had decided to play on in the final round. Peter Svidler had talked to Ian after the first day and said that his friend had decided that the best way to combat jetlag and general fatigue was to go all-in in his games. It hasn’t worked out well! 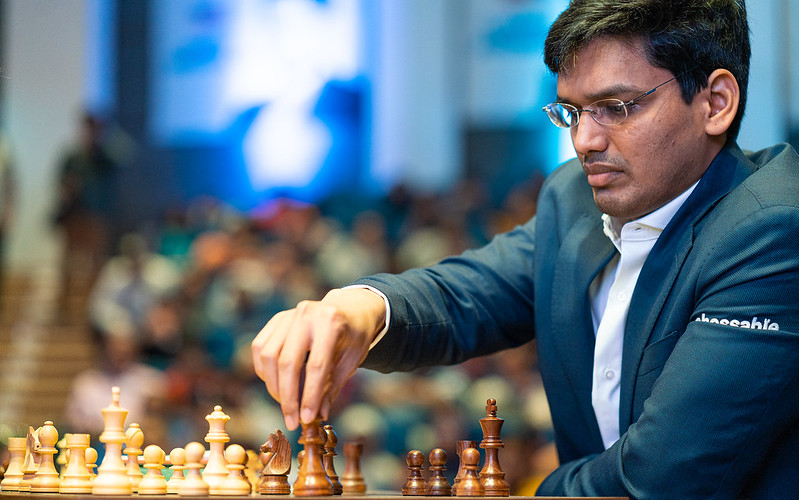 Harikrishna made sure Nepo's win over Anand wasn't the start of a recovery | photo: Lennart Ootes, Grand Chess Tour

In the first game of the day Harikrishna found a brilliant response to Nepo’s resourceful 27…Bd5:

After 28.Rb2 or 28.Bxb8 Black is still in the game, but 28.Rc2!! was essentially game-over. It would get worse for Nepo against Ding Liren, since in a pawn-down position he found a way to finish the game off very fast:

You win some, you lose some

It was a curious day, as five of the other players – Anand, Aronian, Giri, Ding Liren and Nakamura – all won one game, drew one and lost one. Harikrishna won one and lost two, and although Vidit drew two and didn’t win a game, his draw against Magnus felt like a win! 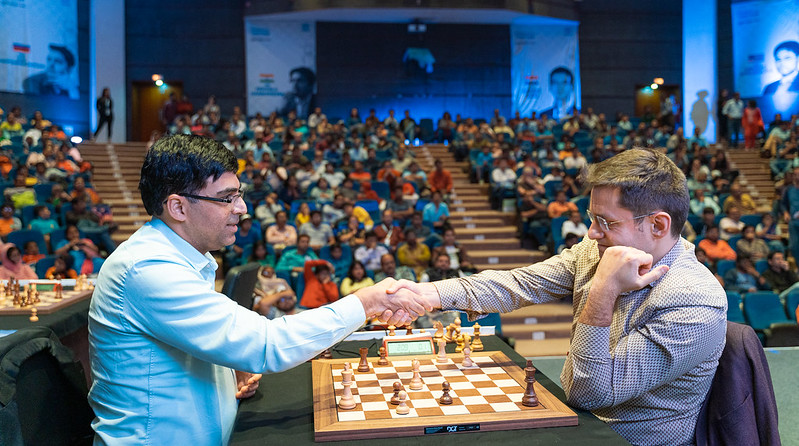 Perhaps Anand-Aronian in the first round of the day illustrated how quickly fortunes could change. Vishy confessed, “I had the feeling that the trend was against me the whole game,” and admitted he only found 34.f5! out of “desperation”:

Black can’t exchange queens on d4 as the g6-knight then has nowhere to go, while 34...Ne7 35.Qg4! is very good for White. Levon found nothing better than giving up a piece with 34…hxg3 35.Qxf6 Rxf6 36.fxg6, though it turns out there was a trick for Black! 34…c3!! works, since if 35.Qxf6 Rxf6 36.fxg6 Black now has 36…Bb5!, hitting the e2-rook and the f1-bishop and threatening to push the c-pawn further if exchanges occur. Levon wasn’t quite desperate enough to find that one, but he went on to bounce back with a fine win against Harikrishna in the next round.

The topic of Day 3 of the rapid is again likely to be whether anyone can stop Magnus, and first up it’s yet another classic – Carlsen-Anand, a match-up that’s particularly noteworthy in India. The old rivals were united in a visit to the India-Bangladesh cricket match taking place in Kolkata. 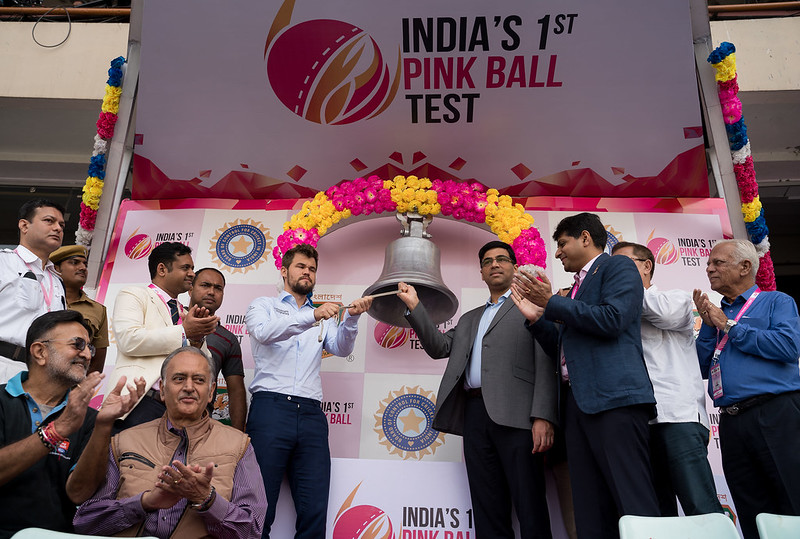 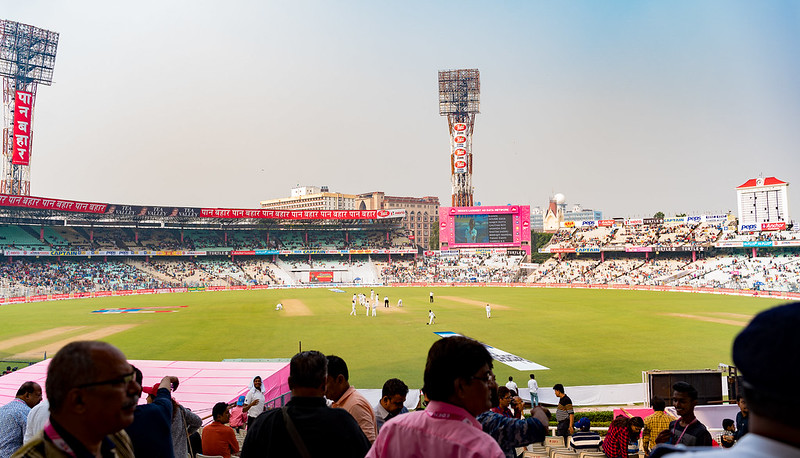 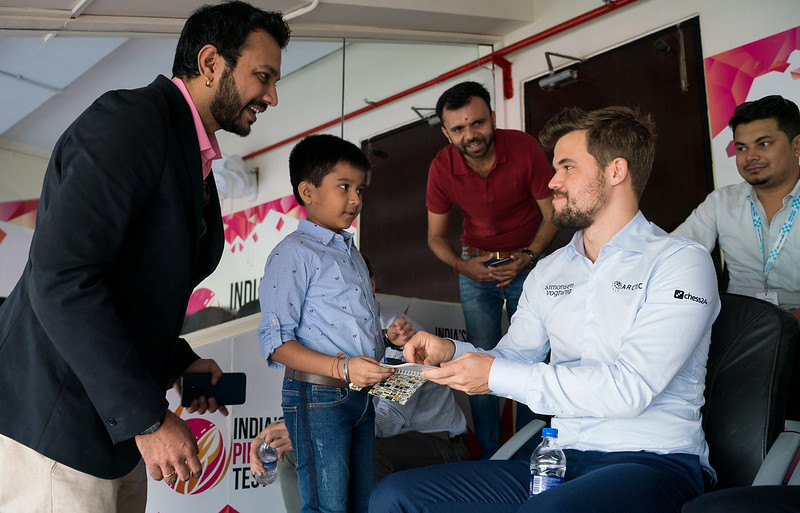 It all just seems like a plot to make Peter Svidler jealous, while not everyone seems to appreciate the game!

You can once again follow all the action from 9:30 CET LIVE here on chess24 with commentary in English and Russian!