Shakhriyar Mamedyarov won a brilliant game against Wesley So as he scored 3/3 on Day 1 of the Tata Steel Chess India Rapid and Blitz in Kolkata. It was all the more impressive after Wesley had scored a fine win over Hikaru Nakamura in the previous round. No-one else has won more than a single game, which was a pattern followed in the Women’s section, where only Nana Dzagnidze made it 3/3. 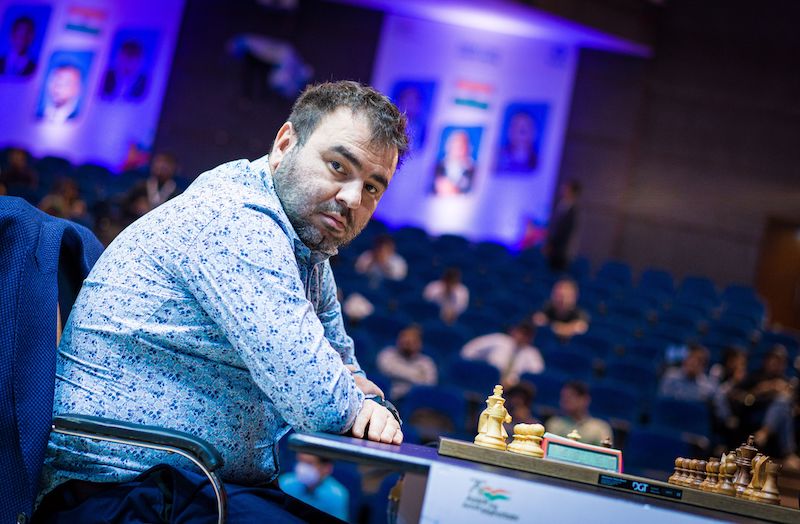 Mamedyarov leads Arjun Erigaisi and Nihal Sarin by a full point after a perfect first day of the Tata Steel India Rapid. 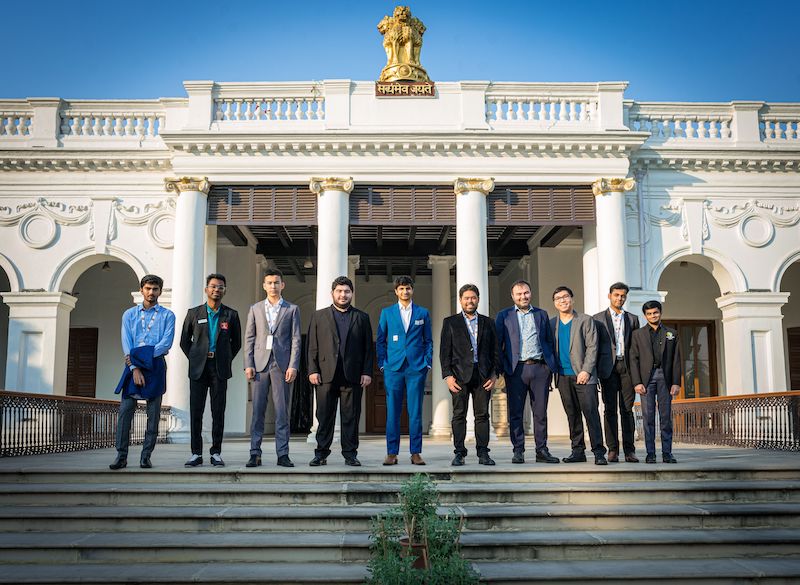 The players pose outside the venue — the National Library of India in Kolkata | photo: Lennart Ootes

Things went the way of the Azerbaijan grandmaster right from the start as 16-year-old Gukesh blundered early on in the first game of the day.

Shakh then admitted to taking some unwarranted risks against Sethuraman in the second game, confessing “when I play against the engine I lose all my games!” Against a human, however, it worked, so that Shakh was in high spirits when he played Wesley So in the final round of the day.

Shakh told Sagar Shah and Tania Sachdev, “I remember this trick from old games — old masters played b5 every time!”

10.Qxb5 was forced, with 10…Bd7! then putting White under huge pressure. Shakh felt 11.bxa5, giving the queen escape squares on the b-file, was best, but then he had 11…Nb4! ready.

In the game after 11.Qg5 axb4 12.Qxg7?! Rg8 Wesley was already in deep trouble, with Shakh commenting, “it’s not very often you can get a position like this against Wesley So — he’s very solid and very good”. The next move that really stood out came after 17.Bf3?!

Shakh went for 17…Qb8!, correctly seeing that 18.Bxa8 Qxa8 would leave him with a huge attack. He said of the move:

The best move in the game, in my style! I don’t think to play with the rook, I just want to continue the attack. 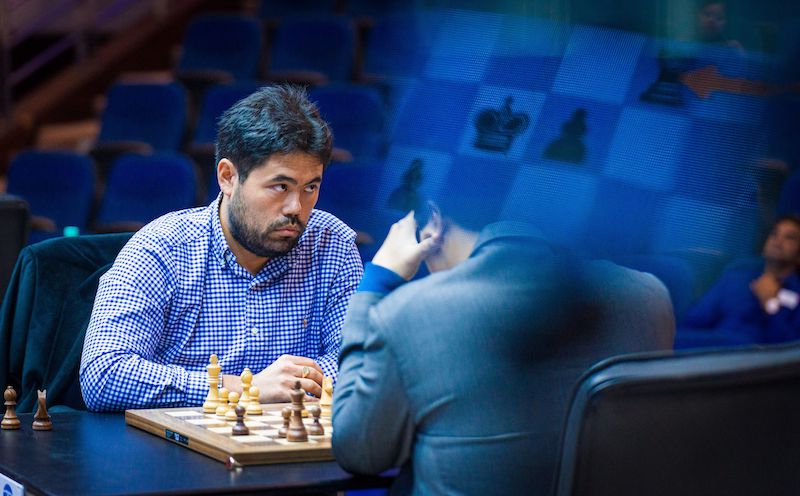 Wesley So beat Hikaru Nakamura in the 2nd round | photo: Lennart Ootes

That game stood out even more since Wesley So had been flying himself. In the previous round he’d played a near perfect long grind against Hikaru Nakamura, before picking the perfect moment to pounce with 85…h3!

It was a tough day for Hikaru, who was also ground down in an endgame by World Rapid Champion Nodirbek Abdusattorov in the next round, though at least Hikaru had got to play one nice move, in the first game of the day.

The point, as we got to see in the game, was that after 12.Bxh3 Qxd5 both the rook on h1 and the knight on b5 are attacked. After 13.0-0 Hikaru took the knight. White was still somewhat better, but the game fizzled out into a draw. 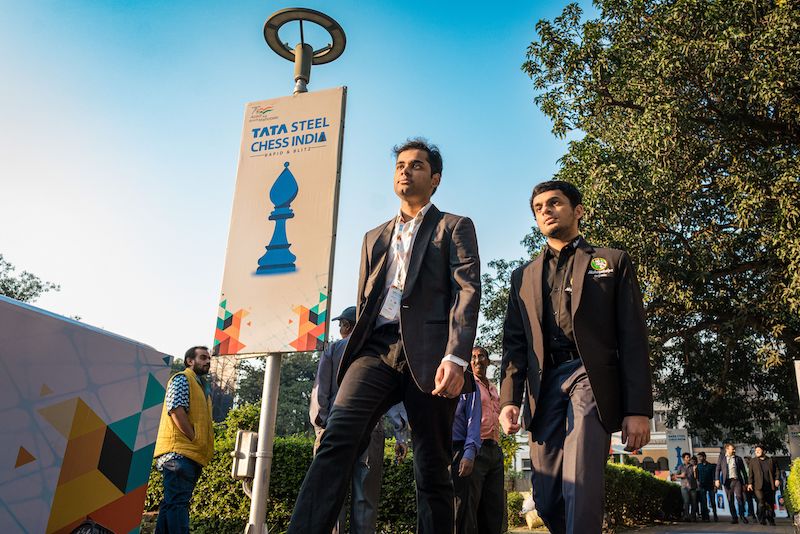 Nihal later beat Vidit to move into second place on 2/3, where he’s joined by Arjun Erigaisi, whose most memorable game of the day was a remarkable escape against Vidit. Arjun had gone for a queen sacrifice which just didn’t work due to 11…Qd4!

Once again a rook and knight are attacked at the same time, and this should have been a comfortable win for Vidit. Arjun won the Tata Steel Chess India rapid section in 2021, however, and used all his resourcefulness to reach a position where it was Vidit who had to force a draw.

This year a Women’s event is taking place each day before the Open, with exactly the same prize fund, and it’s Georgia’s Nana Dzagnidze who is playing the role of Shakhriyar Mamedyarov so far. 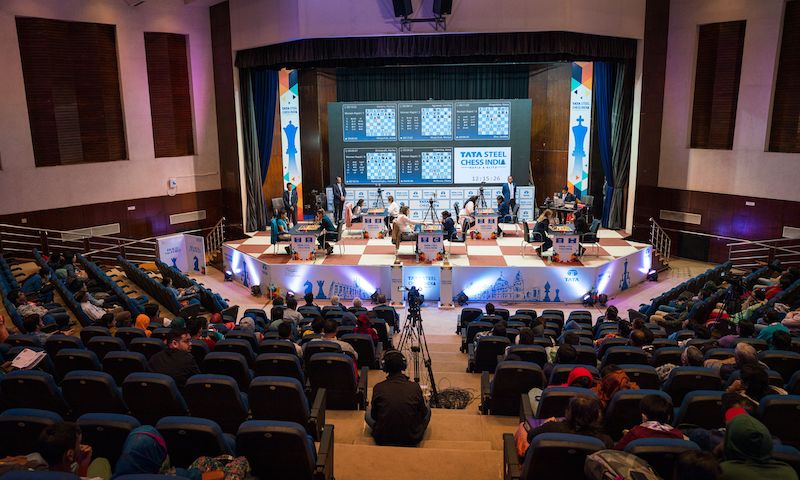 Nana beat Savitha Shri, Vaishali and Oliwia Kiolbasa on the way to 3/3, while again no other player managed to win more than a single game.