Magnus Carlsen joked early on in the tournament that “it’s a shame to waste a White on Loek”, but his game with the white pieces against Van Wely came just when he needed it. He bounced straight back after the loss to Rapport and, with all other games drawn, moved back to within half a point of leader Wesley So. The draw included near misses for Ian Nepomniachtchi and Wei Yi and a wild encounter between Dmitry Andreikin and Pavel Eljanov. In the Challengers co-leader Gawain Jones lost to Jeffery Xiong, allowing Ilia Smirin to join Markus Ragger in the lead. 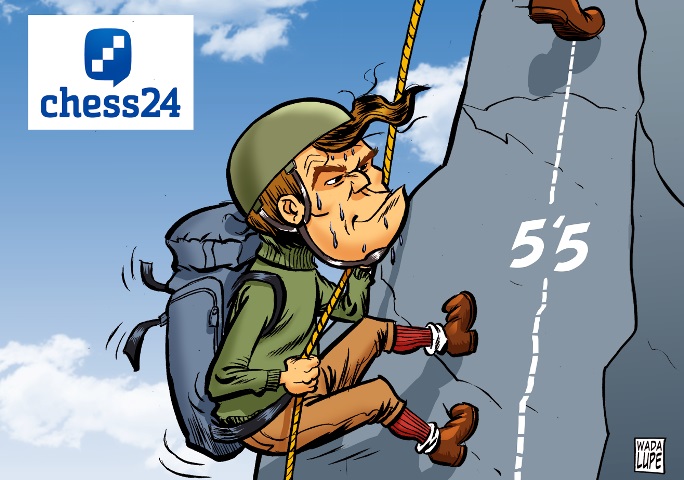 On the day the Tradewise Gibraltar Masters began (of which more later), it seemed, from the results alone, that the Tata Steel Masters was living up to criticism of round robins for being of less interest than top open tournaments:

Wesley So continues to do all he needs to - and no more - to lead a supertournament | photo: Alina l'Ami, Tata Steel Chess

For now, at least, Wesley So is demonstrating that the method that won him last year’s Sinquefield Cup, London Chess Classic and the Grand Chess Tour – win three games, draw the rest and throw down the gauntlet to your rivals – is also valid in Wijk aan Zee.

The remaining games, however, had, or looked likely to have, decisive results.

Tuesday was initially billed as the day Magnus Carlsen could lose his no. 1 spot on the live rating list to Fabiano Caruana. It later turned out that results going against him would “merely” have reduced his lead to less than a single rating point, but such calculations were swept aside in a game where Loek van Wely’s aggressive opening choice soon left him fighting only to draw.

Loek has been a reliable source of points for Magnus in Wijk aan Zee | photo: Alina l'Ami, Tata Steel Chess

Jan Gustafsson takes us through the game:

So near yet so far

The remaining games left plenty of room for regret.

Nepo just can't get that "one win in a row" | photo: Alina l'Ami, Tata Steel Chess

Ian Nepomniachtchi has failed to build on his successful second half of 2016, scoring only 7 draws and 2 losses in the Tata Steel Masters. His reaction to the Round 9 draw against Harikrishna came straight from the heart:

In return for sacrificing an exchange Nepo had a pawn and a fierce attack against his Indian opponent. The moment to capitalise looks to have been when he played 27.Qh5? instead of the lethal 27.Nf5! 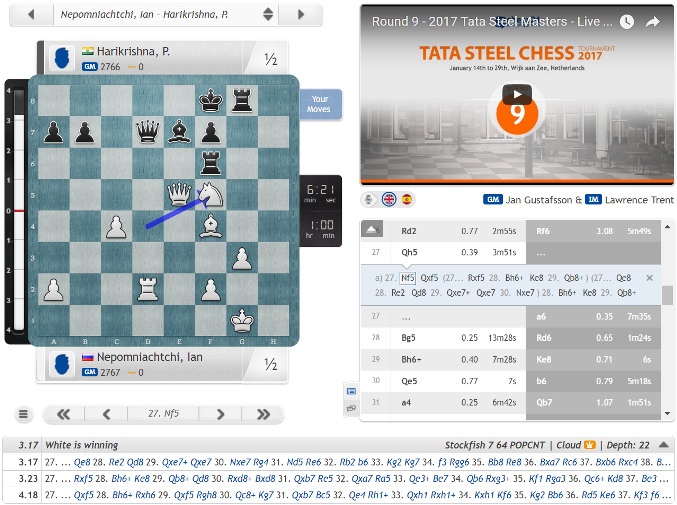 Either 27…Qxf5 or 27…Rxf5 lose to 28.Bh6+!, while 27…Qe8 enables White to simply pin and win the e7-bishop with 28.Re2. What followed after the move in the game, however, was a bitter 79-move draw for the Russian player as he regained the exchange but failed to convert his extra pawn.

Harikrishna could breathe a sigh of relief, but he doesn’t have long to celebrate:

Against Wei Yi it looked as though Adhiban’s policy of playing sharp and inventive openings might finally backfire. The 17-year-old Chinese star was in his element…

…and then he wasn’t. When the dust of the attack had settled, Wei Yi emerged with an extra pawn and a better pawn structure:

In Magnus Carlsen’s hands it would surely have been enough for the victory that would have seen Wei Yi join So in the lead. Instead, 65 moves later, there were only kings and knights on the board and Wei Yi remained in joint second place.

The game of the day, however, was Andreikin-Eljanov, which developed into a fantastic strategic and tactical battle. Dmitry Andreikin, who had lost in the previous round after seven draws, managed to sacrifice not one but two exchanges. The second came with 29.Rb7!?

White’s hopes were bound to his queenside pawns, while Eljanov looked to have excellent chances of rustling up a winning attack against the white king.

It became a thrilling hunt, with the king, like Wei Yi’s against Rapport earlier in the tournament, fearlessly marching up the board:

Is White finally home and dry, with no checks available and the chance to force the queening of a pawn with check? No! 45…Rxf4! saved the day, with Andreikin forcing a draw by perpetual check after 46.Qe7+.

That meant the standings were unchanged apart from Loek van Wely growing more adrift at the bottom of the table, while Magnus joined Eljanov and Wei Yi in second place:

In the Challengers tournament Ilia Smirin beat Jorden van Foreest to move into the joint lead on 6.5/9 with Markus Ragger, after the Austrian was held to a draw while Gawain Jones fell to defeat against Jeffery Xiong. The 16-year-old World Junior Champion has brushed aside defeats in Wijk aan Zee and is now only half a point behind the leaders with four rounds to go: 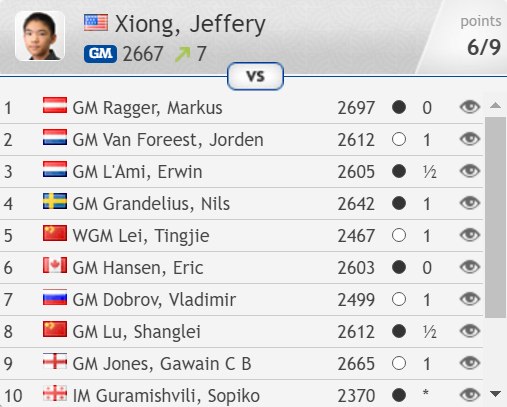 He talked to Anna Rudolf after his game:

The 15th edition of the Tradewise Gibraltar Masters is stronger than ever this year, featuring Top 10 stars Fabiano Caruana, Maxime Vachier-Lagrave and Hikaru Nakamura, the Women’s World Champion Hou Yifan and an embarrassment of riches that makes Boris Gelfand only the 10th seed. 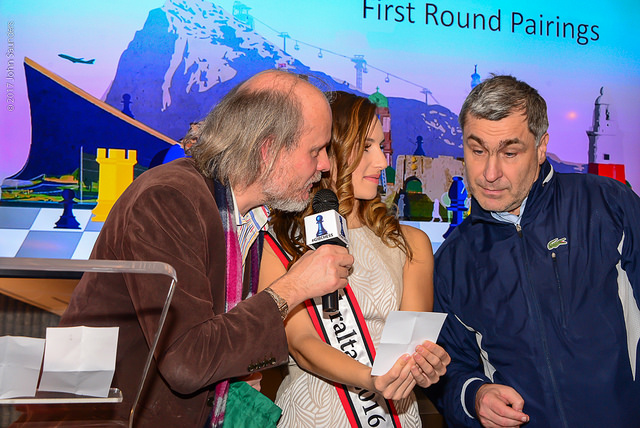 Vassily Ivanchuk with Stuart Conquest and Miss Gibraltar at the opening ceremony - the Ukrainian surprised everyone by playing the Petroff against Petra Papp in Round 1, but eventually did squeeze out a win... in 89 moves! | photo: John Saunders, Tradewise Gibraltar Chess Festival

Traditionally the 10-round open starts with almost no surprises in the first round, but this year was different:

Frank Buchenau (2274) beat Abhijeet Gupta (2645) while Spain’s Emilio Sanchez (2257) crushed Russian rising star Grigoriy Oparin (2625). Both pulled off those feats with the black pieces! Gelfand and Ganguly were held to draws, as was Nigel Short – but when it came to the English former World Championship Challenger that was a miraculous escape:

Young Peter Lombaers had done everything right up to move 44, when all he required was some elementary caution to finish off his high profile opponent. 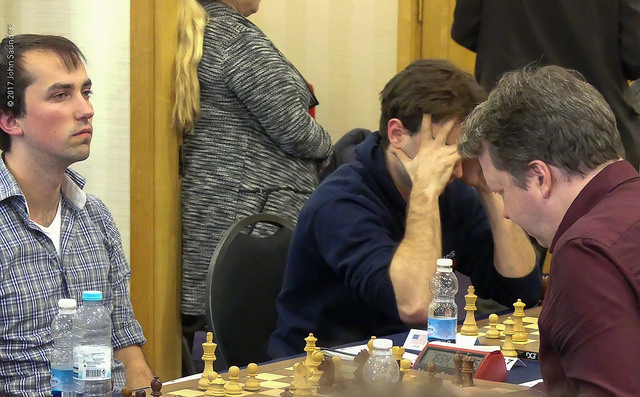 That threw Nigel a lifeline that he snatched immediately with 44…Qe1! – hitting the rook and h4 (threatening perpetual check). After a bitter 12 minutes’ reflection Peter played on with 45.Qd4, but though he kept an extra pawn it was never going to be enough for victory. 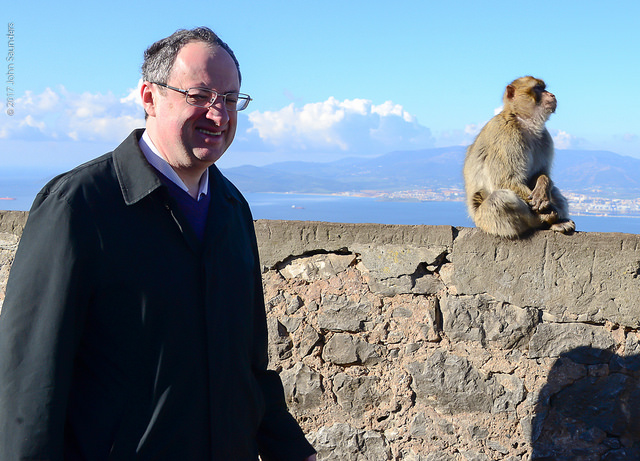 You can watch the Gibraltar Masters here on chess24 from 15:00 CET each day, while the Tata Steel Masters of course also continues with Round 10 starting at 14:00 on Wednesday. The show is moving to Haarlem (not to be confused with Harlem, New York):

The key games at the top in Round 10 will be Harikrishna-Carlsen, Eljanov-Wei Yi and So-Wojtaszek, while Aronian-Rapport looks like one of the most attractive encounters in terms of style. Lawrence Trent and Jan Gustafsson will again be your guides. You can also follow the games in our mobile apps: