Magnus Carlsen got his first win of 2017 after borrowing Sergey Karjakin’s unlikely refutation of the Najdorf to beat Radek Wojtaszek. Sergey mentioned afterwards that he’d only come up with 6.a3 in desperation after forgetting his laptop charger. Pavel Eljanov is now sole leader on 2/2 after Loek van Wely stumbled in the run-up to the time control, while Adhiban suffered an even crueller fate, blundering into mate with a wrong turn on move 39. In the Challengers Markus Ragger is alone on 100%, though he was made to work very hard to beat Lei Tingjie.

The one game everyone had picked out as likely to provide a decisive outcome didn’t disappoint, with Magnus Carlsen now having won all three games he’s played with White against Radek Wojtaszek.

Wojtaszek was jinxed by Jan picking him as the best player in the world to handle the first 20 moves of a game - not for the first time, Carlsen caught him out in the opening | photo: Tata Steel Chess Facebook

This time he did it by picking up Karjakin’s 6.a3 against Giri the day before:

On our live show that led Peter Svidler to reminisce:

It’s very interesting how life progressed. I remember in the early 2000s when Grischuk and I were talking about chess and he was telling me that whenever somebody plays 5…a6 against him - plays the Najdorf against him – he’d think “this game I won, let’s start preparing for the next one, because Black just wasted a tempo on a6 and I will now just develop pieces and give mate”. And he actually proceeded to give mate in a majority of his games, so it wasn’t just bragging or empty threats, and we’ve progressed from that point to 6.a3 as a reply played by two premier chess players of our age in two rounds in a row. In the first two rounds of the first strong tournament of the year, we have 6.a3 played by perhaps the two biggest figures of 2016. Very curious.

The story gets “curiouser” if you choose to believe Sergey’s version of why he went for the move:

Magnus had a plan, though, and met 6…e5 not with Sergey’s 7.Nf3, but with 7.Nf5!? For the full story of what happened it’s over to Peter Svidler:

Afterwards Magnus admitted with a smile that he’d taken “huge inspiration” from his World Championship Challenger:

It seemed for a long time we might get another day with only a single decisive result. The Nepomniachtchi-Andreikin all-Russian encounter was a Scotch that ended in a draw by repetition on move 21. Giri-So made one talented young chess player happy…

…but an extra pawn for Anish was never likely to be enough against the toughest player to beat over the last 7 months.

1.b3 against Sergey Karjakin is one definition of bravery! | photo: Tata Steel Chess Facebook

Rapport-Karjakin saw Richard open with his trademark 1.b3 and reach a position only Jobava and himself among top players had tried, but as he explained himself the resulting structure was actually pretty solid, with Karjakin unable to make any headway in the closed position.

Aronian-Wei Yi was a Catalan that got hugely complicated fast:

All three ways of recapturing a piece required serious consideration, and Wei Yi duly sank into a 26-minute think. It was time well-spent, since after 18…dxe4 he found a way to reorganise his pieces and thwart all Levon’s dastardly plans. The 17-year-old Chinese star has had Black in his first two games but has started where he left off last year, when he drew 11 of his 13 games. His first White will be against Nepomniachtchi tomorrow.

There was a dramatic end to the day’s play, with two games suddenly reaching decisive results after time trouble mistakes. The key encounter for the standings saw Loek van Wely abandon control over the c1-square with 33.Nf4?

That was punished with 33…Rc1+! 34. Kh2 (34.Rd1 Qc6! 35.Qd4 Qc2! also ends badly) 34…Qd8! when suddenly Loek had nothing better than to give up a pawn with check. Instead he played 35.Nh3 and after 35…Qxh4 it was only the fact Pavel Eljanov was also in serious time trouble that meant the game might still be saved. Eljanov’s nerve held, though, and he got his second win in a row, moving up to no. 14 in the world.

It was even more of a bolt from the blue in the all-Indian encounter Harikrishna-Adhiban. The fatal misstep came when Adhiban played 39…Kf5? after over 4 minutes thought (39…Kf7! was still a draw):

The results mean the field is already beginning to spread out after only two rounds: 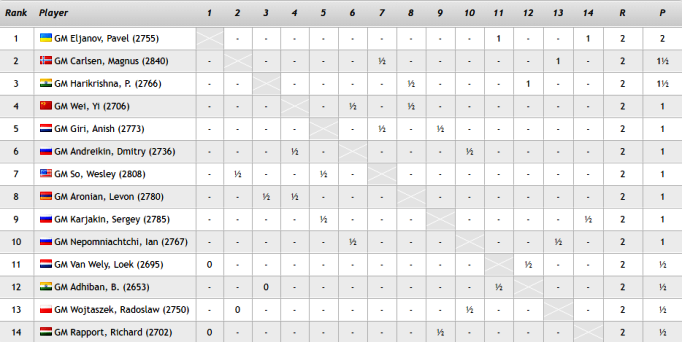 Markus Ragger needed 84 moves to beat 230 points lower rated Chinese WGM Lei Tingjie in the longest game of the day in Wijk aan Zee, but he was richly rewarded for his efforts with sole first place on 2/2.

The second longest game saw Jeffery Xiong shrug off his first round defeat to outcalculate Jorden van Foreest in what became a very tricky ending.

The other wins were more dramatic. Sopiko Guramishvili had come within a whisker of beating Lu Shanglei in Round 1, but allowed Gawain Jones to give checkmate in Round 2. Lu Shanglei also suffered, with his many sacrifices against the Sicilian gratefully accepted by the experienced Ilia Smirin. Jan Gustafsson compared Ilia’s play to Pac-Man, while Peter Svidler showed a different range of reference...

Smirin played this game in the spirit of dialectical materialism, which he probably studied in university.

You can replay Jan and Peter’s live show in full below:

In Round 3 we can expect Karjakin and So to try and make a move as they have White against Van Wely and Rapport, while the other favourites Aronian (playing Adhiban), Giri (Wojtaszek) and Carlsen (Andreikin) all have the black pieces, though we can always expect the unexpected...

Our commentary team will change, with Peter Svidler this time joined by his occasional Banter Blitz nemesis Lawrence Trent! Tune in for all the action from Wijk aan Zee on Monday at 13:30 CET. You can also follow the games in our mobile apps: