Magnus Carlsen plays Sergey Karjakin in the final round of the 2017 Tata Steel Masters knowing a win will likely mean a title playoff against Wesley So. In the penultimate round Magnus beat Pavel Eljanov from a position he was struggling merely to hold, while Levon Aronian inflicted a 7th loss of the tournament on Loek van Wely to move into a tie with Wei Yi and Carlsen for 2nd place. In the Challengers Jeffery Xiong’s hopes lie in tatters after he lost to Aryan Tari while Markus Ragger and Gawain Jones both won to overtake him.

Magnus may have been out of sorts in Wijk aan Zee, but there's still no more fearsome opponent in world chess | photo: Alina l'Ami, Tata Steel Chess

The 12th round of the Tata Steel Masters set up the final round perfectly:

Magnus does it again

Magnus Carlsen has now won all five classical games he’s played against Pavel Eljanov, with the World Champion admitting “maybe it was in the back of his head”.

Carlsen played the Stonewall Dutch and soon ended up in what looked to be close to a strategically lost position. 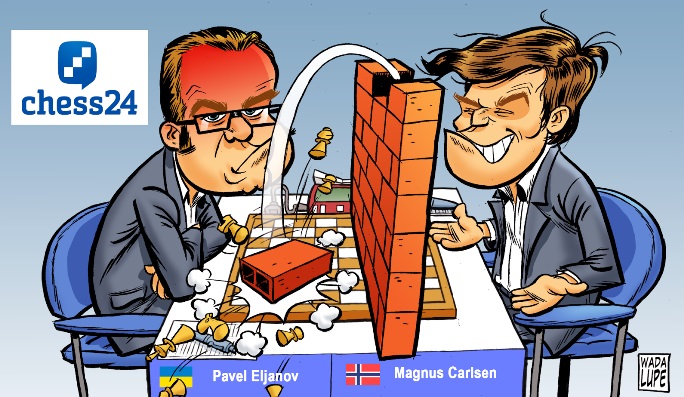 Just another brick from the Stonewall...

Then the old, familiar Magnus took over, arguably playing his best chess of the event so far. Lawrence Trent takes us through the game:

Afterwards Magnus admitted, “it’s amazing considering how poorly I’ve played in the second half that I’m still in with a chance”, while also talking about his missed mate-in-3 against Anish Giri:

So vs. Wei Yi and other draws

Before the round the key showdown was Wesley So’s game against Wei Yi, with the young Chinese player theoretically in with a chance of overtaking the long-term leader.

Alas, the styles of both players – Wesley’s general solidity and Wei Yi’s rock solid black repertoire – meant the draw that followed was predictable. For 14 moves Wei Yi followed a line he'd played against Ding Liren in the 2014 Danzhou tournament. Queens were exchanged on move 9, with Black winning a pawn but slightly worse due to a ruined pawn structure. Wesley So varied with 15.Bf4+, but although Wei Yi soon took one of his deep thinks – over 45 minutes – there was no preventing a draw in 32 moves.

Karjakin-Nepomniachtchi, with both Russian players already out of the race for first place, was drawn in a blink-and-you-missed-it 21 moves, while Wojtaszek-Andreikin was a complicated 51-move draw in which the balance was never seriously upset. The other draws were less logical…

Not one of the finest games by either player | photo: Alina l'Ami, Tata Steel Chess

Not for the first time in Wijk aan Zee, Harikrishna appeared to blunder away a pawn in the early opening, this time with 9.Nd2?!

9…Ndxe5! 10.dxe5 d4! was child’s play for Richard Rapport, who proceeded to simplify the position until he was simply up a clear extra pawn and the only question was whether he’d convert his advantage. Harikrishna has shown remarkable resourcefulness in Wijk aan Zee, though, while Rapport’s tournament has, one game excepted, been something of a debacle. It was the same script again as Rapport somehow almost managed to lose the game.

Adhiban-Giri saw Anish successfully tame his firebrand opponent. As he put it:

Generally I know Adhiban’s preference for chess positions and women, so I was thinking what I did was very clever.

After some sharp tactics the ending that arose was clearly in Black’s favour, but was it enough to win? Giri thought so initially, and then even thought so when he traded off rooks after being “seduced” by a pawn ending, but he admitted he must have seen some ghosts as it all soon came to nothing.

The players talked together after the game:

Levon Aronian has now won his last three games with the white pieces, crediting his 4/5 score in recent games to the arrival of Arianne Caoili.

Against Loek he felt the moment of no return came when the Dutchman played 23…Rb7?!

24.Qf4! pinned the f6-knight and led to a position where Aronian said the tactics don’t work for Black, while White has a clear plan. The surprising thing is that the queen sacrifice that followed from Loek was better than it looked, but Levon still managed to crash through, getting in another devastating f5-break:

Loek only managed another four moves before resigning with no good way to prevent a simple mate.

The standings with a round to go, therefore, are that Wesley So leads by half a point, with only Carlsen, Aronian or Wei Yi still able to challenge him: 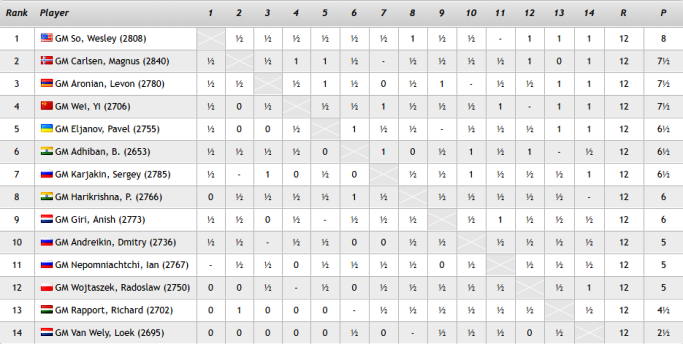 None of the players have an easy final round:

Although Wesley So has won all three games he’s played against Nepomniachtchi, the odds must still be against him scoring the win with Black which would guarantee him the title. If he draws then his pursuers can all force a rapid playoff with a win. Wei Yi and Carlsen may have the best chances with the white pieces, though in the last five games Andreikin has lost two while Aronian, as we saw, has won three. One thing’s for sure, you won’t want to miss it!

What a difference a day makes! His win in the penultimate round made Jeffery Xiong the favourite to qualify for the 2017 Tata Steel Masters, but suddenly his chances of automatic qualification are hanging by a thread:

The 16-year-old was well beaten by 17-year-old Aryan Tari, who was enjoying himself when he got to play 16.d5!

Xiong put up fierce resistance, but was eventually ground down by near flawless play from his opponent.

Xiong had to play that game while knowing his rivals were scoring spectacular wins, with Markus Ragger and Gawain Jones catching the kings of Jorden van Foreest and Vladimir Dobrov in the centre of the board.

Gawain ended with what he accurately described as a “pretty finish”: 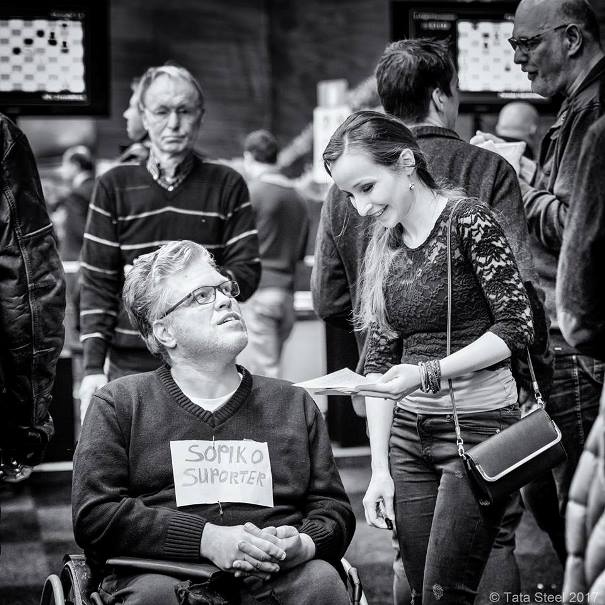 Going into the final round of the Challengers Jones and Ragger lead on 8.5/12, but have the black pieces. Xiong is joined half a point behind by Ilia Smirin, who also has Black. Xiong is the only contender with the white pieces, which is not to be dismissed given he’s won all his games with White so far in Wijk aan Zee! He faces Benjamin Bok, who has stabilised with five draws in a row after a bad start.

You can replay Jan and Lawrence's full commentary on Round 12 below:

Don't miss the final day of live commentary from Lawrence Trent and Jan Gustafsson from 1.5 HOURS EARLIER at 12:00 CET on Sunday. You can also follow the games in our mobile apps: