Tata Steel 2015 R4: Ivanchuk and Carlsen are back 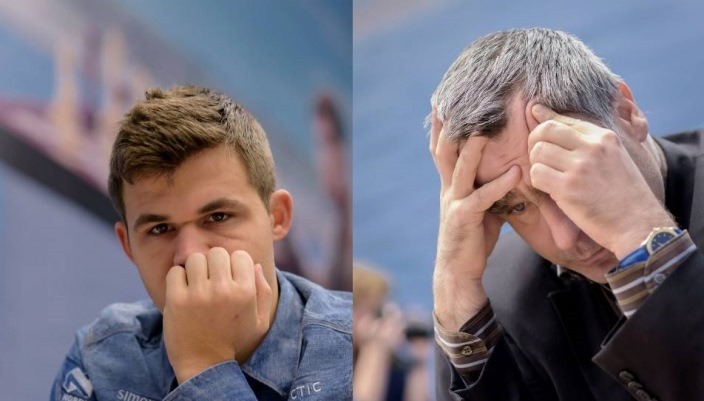 Vassily Ivanchuk is the sole leader in Wijk aan Zee after rolling back the years, not only crushing his opponents – today French no. 1 Maxime Vachier-Lagrave – but also delighting fans with his quirky post-game commentary (don’t miss the video below!). World Champion Magnus Carlsen scored his first win of 2015 against a hapless Loek van Wely, some more wacky play backfired for Baadur Jobava against Ivan Saric and Ding Liren quietly notched his third win in a row after outcalculating Teimour Radjabov. 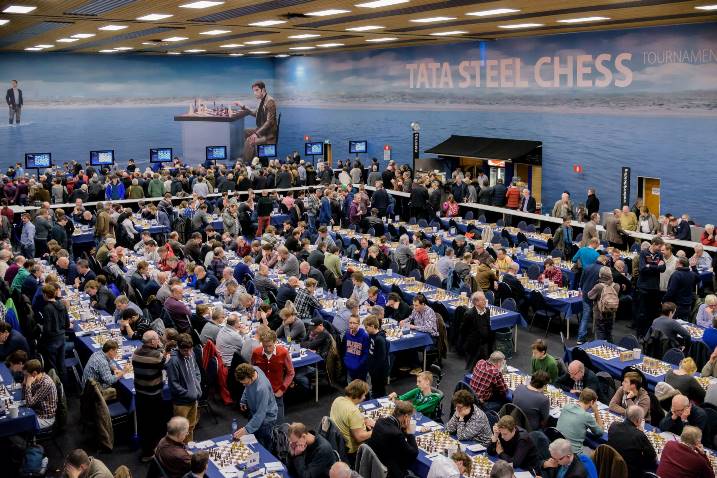 After the mayhem of Round 3 it initially seemed the players were going to take a breather. Round 4 began with solid openings (if you don’t count Jobava!) and evenly-balanced play. Aronian-Wojtaszek quickly reached a drawish queen ending which allowed both players to consolidate after their wildly varying fortunes the day before. 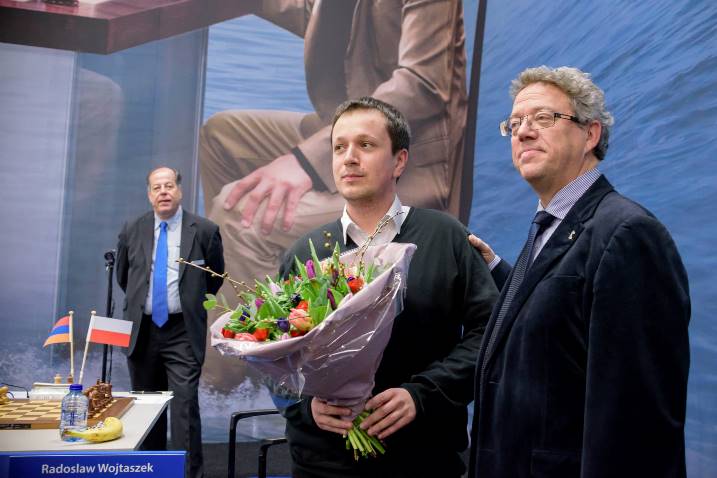 Anish Giri has a minus 2 score against Women’s World Champion Hou Yifan, so may not have been as disappointed as you might otherwise imagine with a 20-move draw by repetition. Judge for yourself:

Wesley So managed to surprise Fabiano Caruana with a move the world no. 2 couldn’t remember the antidote to (9…Nb8), only to surprise him again with an early draw offer. Caruana held on, but he later admitted it was a mistake to say no:

That, however, is where the draws ended! It’s hard to keep a good man down, and Magnus Carlsen simply told VG “I’m back” after banishing memories of the day before. His win against Loek van Wely followed a not unprecedented pattern – Loek seemed on top out of the opening but then Carlsen began to find ways to allow his opponent to go wrong, until… well, the shock was how suddenly it all fell apart for the former Dutch no. 1. Jan Gustafsson takes us through the encounter:

Jan also analysed Jobava-Saric, which is very lucky for us, since it’s a game it’s hard to know what to say about!

Saric himself also commented on that encounter during the live show:

Do you agree with Macauley?

If there’s one area where you don’t want to compete with the top Chinese players it’s calculation, so it wasn’t a huge surprise when Ding Liren emerged victorious from a murky position with opposite-side castling. It was, however, hugely impressive. Ding Liren has shaken off the solidity that saw him draw all his games in his last supertournament in Moscow in style. That’s now three wins on the trot after an opening defeat. 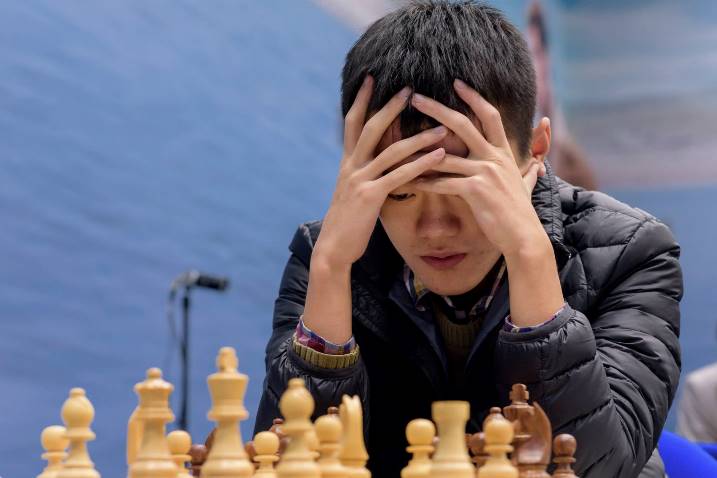 And that leaves us with the shortest, and most attractive, game of the day. Vassily Ivanchuk was yet again in supreme Sicilian-slaying form against Maxime Vachier-Lagrave, applying relentless pressure until his 2757-rated opponent cracked. 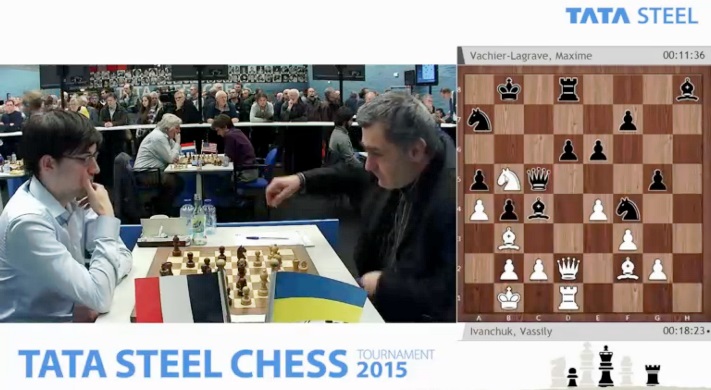 Maxime allowed Ivanchuk to play the winning move, 30.Nb5!, before immediately offering his hand in resignation

Jan takes us through the game, including some general tips on how to play against the Najdorf Variation of the Sicilian Defence:

Ivanchuk’s success confirmed the suspicions of our Spanish editor David Martinez in the run-up to the tournament:

Vassily ended 2014 on a positive note at the World Mind Games in Beijing, and although that was only speed chess I think it may have been a sign of a return to his best. His biggest rival, as for almost the whole of his career, will be himself – his nerves and time trouble issues… but isn’t that also part of the show?

So far so good, with the way Ivanchuk made absolutely certain of the travel details for the next round in Rotterdam making it clear just how focussed he is:

It’s also worth including the statistics gathered by Vlad Tkachiev about Ivanchuk’s results against opponents in this tournament. With the notable exception of encounters with a little know Norwegian… he’s doing very, very well: 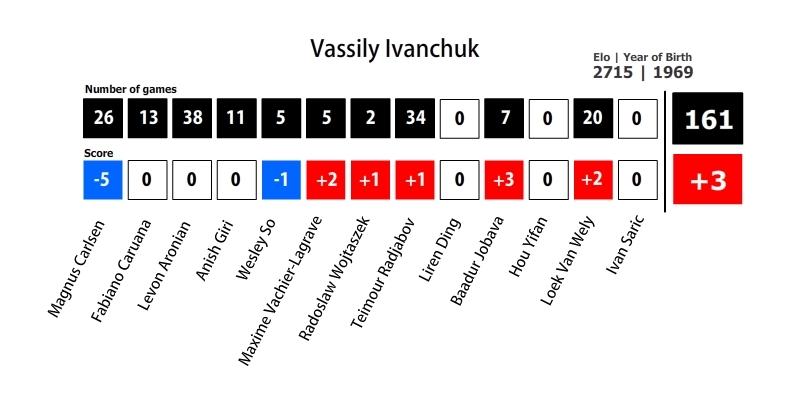 Another decent player also chimed in: 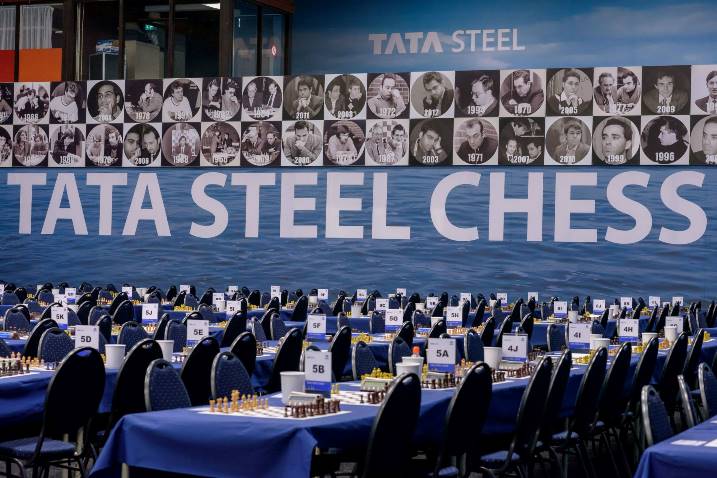 The eagle-eyed will be able to spot both Kasparov and Ivanchuk on the history wall at the venue | photo: Alina l'Ami, Tata Steel Chess Facebook

On Thursday Ding Liren has the chance to make his move, with the white pieces against Ivanchuk, while Caruana has Black against Wojtaszek. We’ll also get to see one of the most anticipated encounters in modern chess: Carlsen-Aronian. Can Levon improve on his unflattering score against Magnus, or are we about to see a streak of wins?

In the Challengers, meanwhile, the triumvirate of Wei Yi, David Navara and Robin van Kampen are out in front, with Robin putting an end to Anne Haast’s celebrations after defeating Jan Timman the day before. 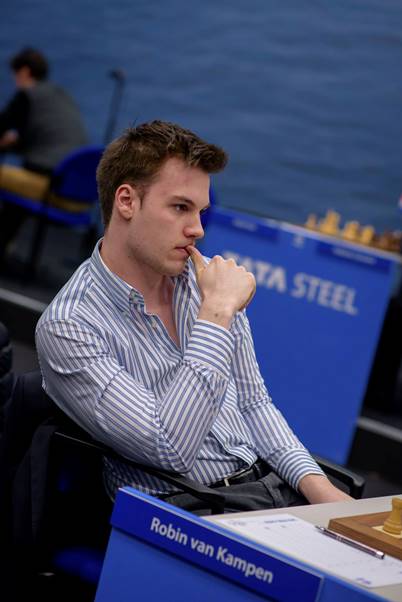 It was a much better day for RVK than MVL and LVW! | photo: Alina l'Ami, Tata Steel Chess Facebook

So finally the players get a day's rest, but, as you'll already know if you watched Vassily Ivanchuk's search for the truth, Round 5 starts half an hour later on Thursday. Once again, make sure to follow it live here on chess24!