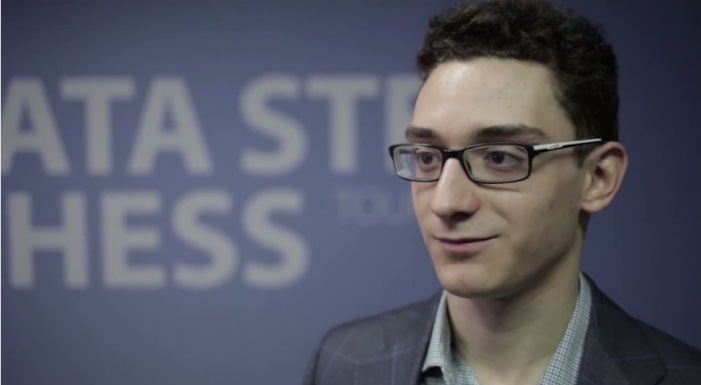 Fabiano Caruana commented “maybe not so smooth today, but a perfect start!” after he beat Ivan Saric to move into the sole lead on 2/2 at the 2015 Tata Steel Masters in Wijk aan Zee. The only other winner was Ding Liren, who opened his own account at the cost of leaving compatriot Hou Yifan on 0/2. Wesley So forced Magnus Carlsen to go for a draw in their first classical encounter, while the longest game of the day saw Loek van Wely miss gilt-edged chances to defeat the tournament’s escapologist-in-chief Radek Wojtaszek.

Round 2 results in the 2015 Tata Steel Masters

Can Caruana do a Caruana?

Ok, it’s still a little early (in the year and the tournament), but Fabiano Caruana has already started doing what he does best – winning games of chess. Although you can’t get better than 2/2, Ivan Saric had been the one asking the questions until well into a game that took a long time to warm up. Grandmaster Jan Gustafsson looks at where it all went wrong for the 2014 Tata Steel Challengers Champion:

And here’s what the man of the moment himself had to say about the game:

So who can stop Caruana? Well, the obvious choice is Magnus Carlsen, although it’s worth noting he’ll have the black pieces when he meets Caruana in Round 6. Before that, though, the gods have placed rounds 2-5, and today Carlsen came up against 21-year-old rising star Wesley So. 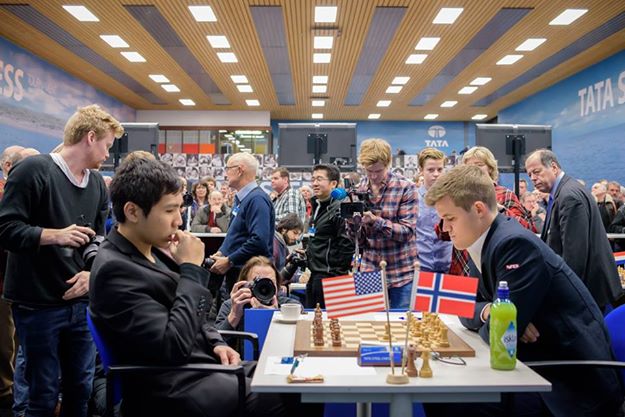 The Filipino has trained with Magnus in past, and his ferociously tactical style (it’s perhaps no accident he said afterwards that “chess is 95% calculation”) may be what Carlsen is most vulnerable to… if we can talk about the vulnerability of someone rated higher than anyone in the history of chess.

Carlsen perhaps first tried to unsettle his opponent with one heck of a handshake!

Then he tried to bamboozle his opponent positionally with the curious 13.a4, leaving a gaping hole on b4:

Sure enough, when the game eventually ended in a repetition there was still a black piece on that square:

Carlsen admitted afterwards to being outplayed in the middlegame, but noted he'd started with two draws in 2013 before winning that event with ease:

Wesley So was happy, but also showed the pragmatism that Vlad Tkachiev noted was typical of the new generation in his post-game interview:

Levon Aronian and Anish Giri both have the potential to challenge for first place, but in the game today what they showed above all was the depth of elite-level opening preparation, especially if you pick something as complex as the Grunfeld. 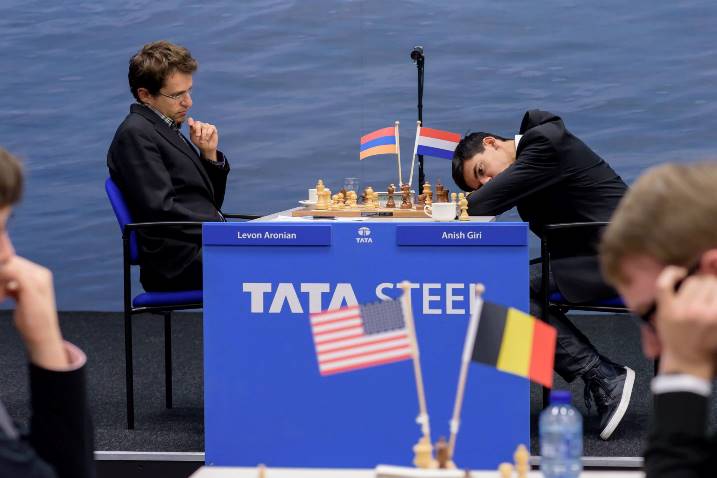 Neither player spent more than a couple of minutes until move 24. It was clear that Giri felt the line he’d chosen would solve his problems:

No pawns, no problem?

By the time queens had been swapped off White was two pawns up, but Giri went on to demonstrate that opposite-coloured bishops could hold the day. Giri was happy with his final move which he correctly guessed would baffle the computer (for the second day in a row!):

The black bishop and king can easily handle the outside passed pawns.

Maxime Vachier-Lagrave and Vassily Ivanchuk both won in Round 1 and weren’t hindered by the black pieces in Round 2. Maxime drew the quickest game of the day against Baadur Jobava after a cute repetition on move 22, while Ivanchuk managed to win a pawn but couldn’t press home his advantage in a 53-move game against Teimour Radjabov.

Radjabov's thoughts may have been elsewhere, since this was the anniversary of the tragic death of Vugar Gashimov:

You might have missed Jan Gustafsson's recollections of his teammate, which were published before chess24 had publicly launched last year. 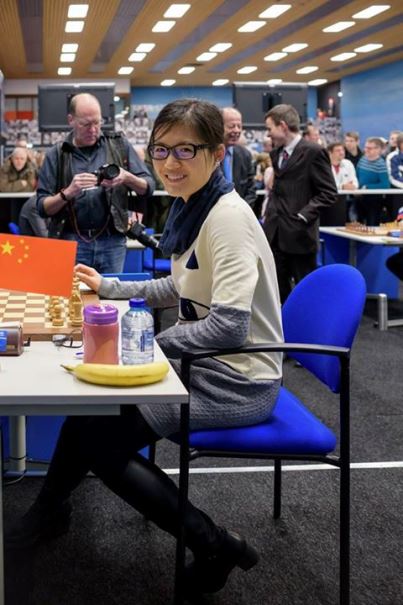 Ding Liren and Hou Yifan both lost on Day One but had no thought of consolidating against each other in Round 2. The Chinese World Champion played an imaginative pawn sacrifice in order to inflict damage on Black’s structure:

The position after Hou Yifan has played 13.0-0

China’s no. 1, however, managed to untangle himself and it was precisely an extra pawn that was about to be queened when Hou Yifan resigned on move 58.

Wojtaszek does it again

The final game to finish will give Loek van Wely nightmares, though a lot of credit has to go to the incredible resilience of Polish no. 1 Radek Wojtaszek. Again he had the black pieces and again, as against Wesley So in Round 1, he ended up in dire straits. Only serious time trouble explains why Loek missed a killer blow on move 38:

38.Ra6! might have forced resignation almost on the spot. If the rook is taken simply Qc7+ is crushing, but otherwise 39.Rc6 will set up a mating construction Black can do nothing about. Instead after 13 seconds Loek played 38.Rc1? and the game went on. Despite Radek’s tenacity it was still White’s game to win and the move on which everything turned was 52…Qg4!?

The exclamation mark here is for the bluff, if that’s what it was! Pawn endings need notoriously accurate calculation, while Loek felt he could only afford 39 seconds to reject the ending. The computer, however, instantly gives 53.Qxg4! as +90.24 (that’s a lot of pawns…) for White. You can play through the line here. Instead Loek went for 53.f3? and after 53…Qg5 54.Kh3? Qc1! the worst was over for the Polish no. 1. His prize? The white pieces against Magnus Carlsen in Round 3! 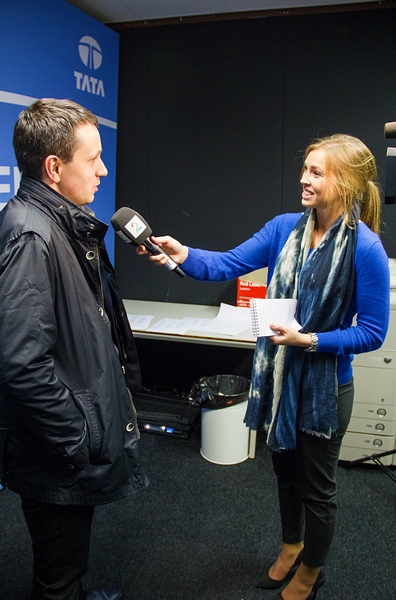 When interviewed by Norwegian TV after the game Wojtaszek didn't feel his work as a second for Anand would be a deciding factor in the Round 3 game | photo: Chess-News

Wojtaszek can surely only improve on his first game against Magnus at the Olympiad.


So the standings after only two rounds see a clear leader, Fabiano Caruana, and a player alone at the foot of the table, Hou Yifan:

Of course with 11 rounds to go it’s absolutely all to play for! 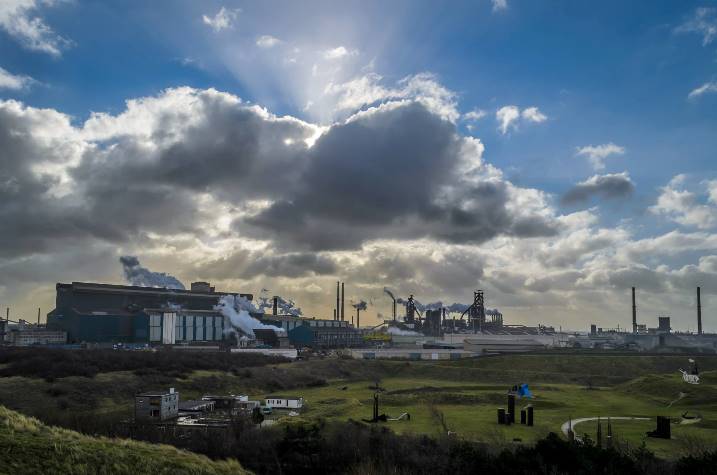 Ever wondered what Tata Steel has to do with Wijk aan Zee? | photo: Alina l'Ami, Tata Steel Chess Facebook page 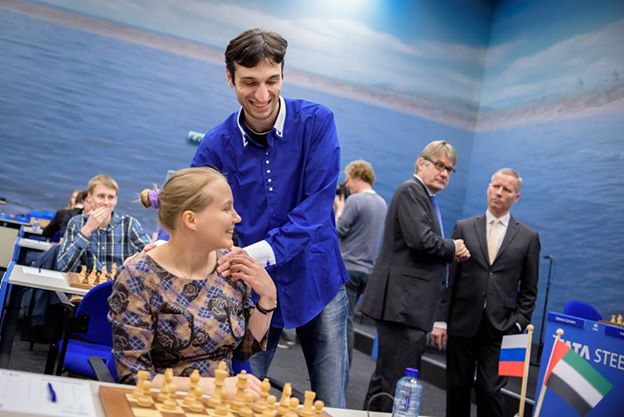 Here 33…Rxg6!! 34.Qxg6 Rg7 would have transformed the game, since the pressure on g2 forces White to exchange the queen. All the Challengers games can be replayed here.

Robin van Kampen remains among the leaders of the Challengers after a quick draw and was able to join the commentary with Yasser Seirawan: