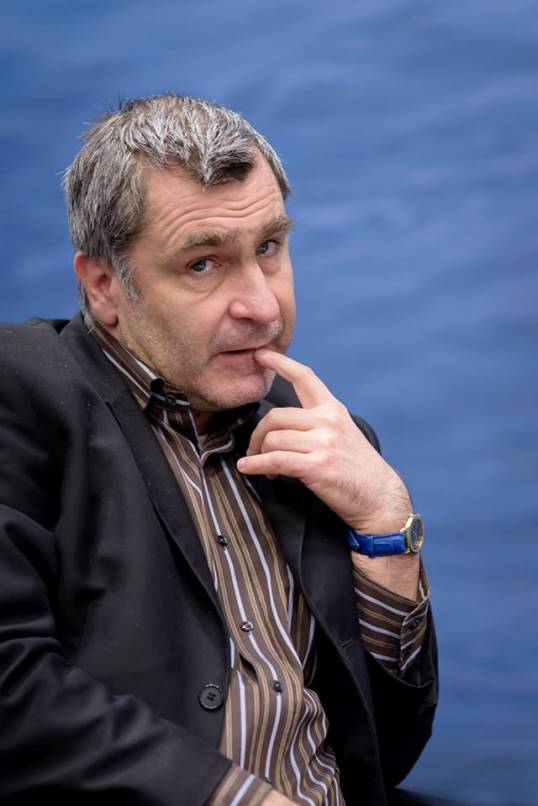 New year, but same old Fabiano Caruana! He started the Tata Steel Chess Tournament in Wijk aan Zee by beating Ding Liren with Black, while Magnus Carlsen’s opening surprise was only enough to draw with Anish Giri. There were two other winners - Maxime Vachier-Lagrave beat Women’s World Champion Hou Yifan, but the highlight of the day was Vassily Ivanchuk’s priceless explanation of why his opponent Baadur Jobava suddenly resigned.

Let’s start with Ivanchuk. His game against Jobava was a focus for chess fans before it even began. In our tournament preview by IM David Martinez the two players were classed as “seasoned dreamers” who share creativity and a willingness to take risks. GM Vlad Tkachiev picked the two as the betting man’s choice, since they were capable of pulling off a big surprise and, “in the depths of winter you need to pick warm-blooded, or even boiling-blooded players”. Despite all that, though, their game seemed to be drifting towards a draw… until Ivanchuk captured on a4:

…and Jobava resigned! Since the computer was giving 0.00 the first thought was that the players or arbiters had placed the kings wrongly on the board when they wanted to signal a draw. The second thought was that Jobava had committed a huge blunder:

But no! You could discover the truth by simply making a couple of the computer’s moves on the board, either here on chess24 or on the official website. If you’re a Premium member, or you wait a while (it can be a very long while during a popular tournament!), you see the computer’s new analysis of the position: 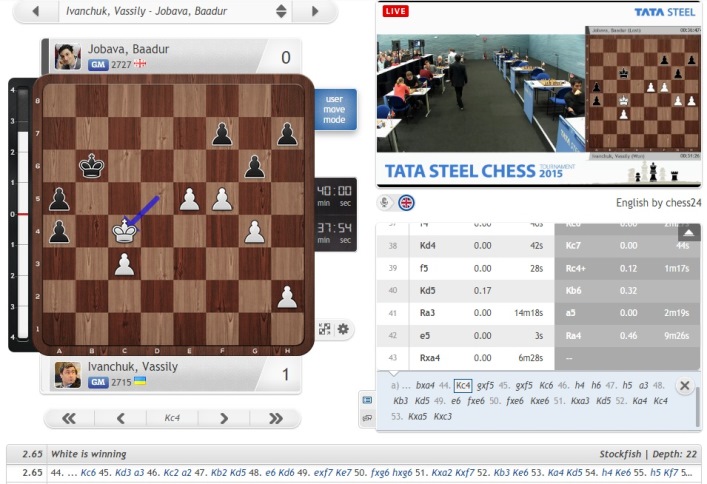 Suddenly it spots that White is winning the pawn ending. That’s a great tool, but we have to admit it was hugely more fun to watch Vassily Ivanchuk explain, on the live broadcast, why the final position was “not difficult for a good GM”. If you’re really pressed for time you can scroll towards the end of the clip simply to watch his hand gestures which mean either “it’s gone!” or “you can’t stop those pawns!”

The most anticipated clash of the day, though, was undoubtedly Giri-Carlsen. 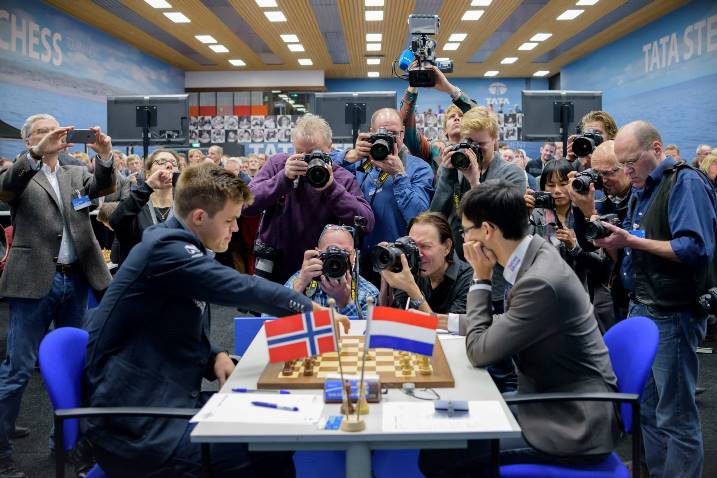 …while after it was over Giri joined in as well:


Maybe he thought that finally it’s time to beat me, or maybe he doesn’t have an opening at all.

Jan Gustafsson takes an in-depth look at a game that went down “an offbeat line of an offbeat opening”:

And here’s Anish Giri’s take on what happened:

Both those games ended in pawn endings and it was the same in Vachier-Lagrave – Hou Yifan. The women’s World Champion played the French Defence against the French no. 1 and gave him a lot to think about, but eventually she cracked. At the very end Maxime had taken 24 minutes to check he had everything under control on his last move before playing:

56.Rxd5+! Rxd5 57.Nxd5 Kxd5 58.Kf2, and although at a quick glance you might think the b-pawn saves Black, Hou Yifan acknowledged defeat. 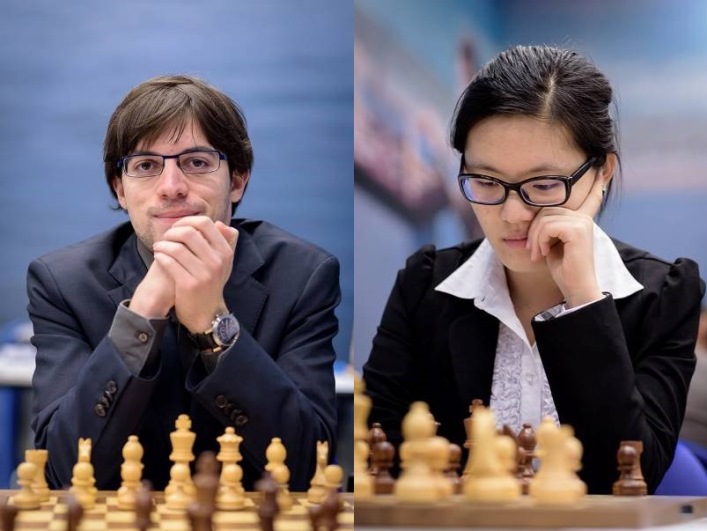 A good day for the French no. 1 after a horrible week for France | photos: Alina l'Ami, Tata Steel Chess Facebook page

The final win of the day was a typical powerhouse display by world no. 2 Fabiano Caruana, who didn’t let serious time trouble get in the way of defeating Wijk aan Zee debutant Ding Liren. Jan Gustafsson again takes us through the game:

Afterwards the Italian star was as modest as ever:

That leaves only three draws. Loek van Wely played the Pirc against Teimour Radjabov, but that game flattered to deceive. Saric-Aronian earned the seemingly misplaced ire of Silvio Danailov (the game didn't end in this position):

Saric missed a real chance when he failed to play c6! on move 24, but it’s unlikely either player was too unhappy with the result. Saric made a solid start to the elite event after graduating with flying colours from the Challengers a year ago, while a draw with Black is never the worst result in the world.


The last game to finish, So-Wojtaszek, was an utterly different story. 21-year-old Wesley So showed a huge will-to-win as he tortured Polish no. 1 Radek Wojtaszek. Eventually it seems he pressed too hard and allowed Wojtaszek to seize the initiative, before Radek slipped himself, though frankly the ending was too complex to be sure of any instant assessment. You can replay it with computer analysis (but do make your own moves on the board to check that!) here. 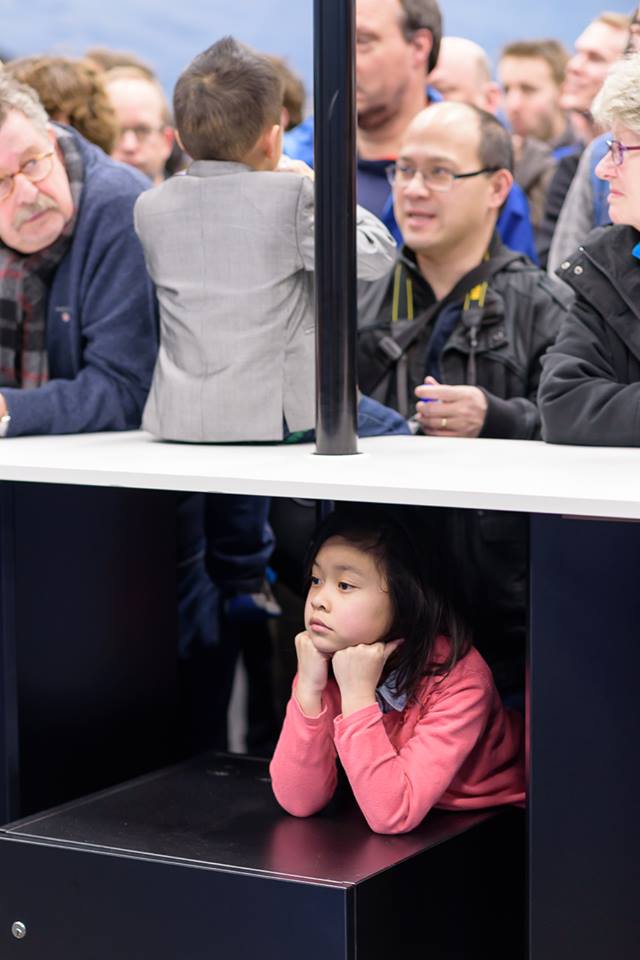 All that’s left is to briefly mention the Challengers Tournament. Usually, given the lower ratings and greater range among the players, that event provides more decisive games than the Masters. This time, however, there was only one winner – local hero (and chess24 video author) Robin van Kampen, who comprehensively outplayed 14-year-old US prodigy Samuel Sevian.

Let's end with a brief video recap of the day in Wijk aan Zee: