Nils Grandelius is the only player on a perfect 2/2 in the Tata Steel Masters after he scored an effortless win with the black pieces over Jan-Krzysztof Duda in Round 2. The only other player to win was Fabiano Caruana, who found some brilliant moves to put late replacement Alexander Donchenko to the sword in a game analysed by Jan Gustafsson. Magnus Carlsen headed the list of players frustrated by draws as he couldn’t quite squeeze out a win in a 6-hour marathon against David Anton. 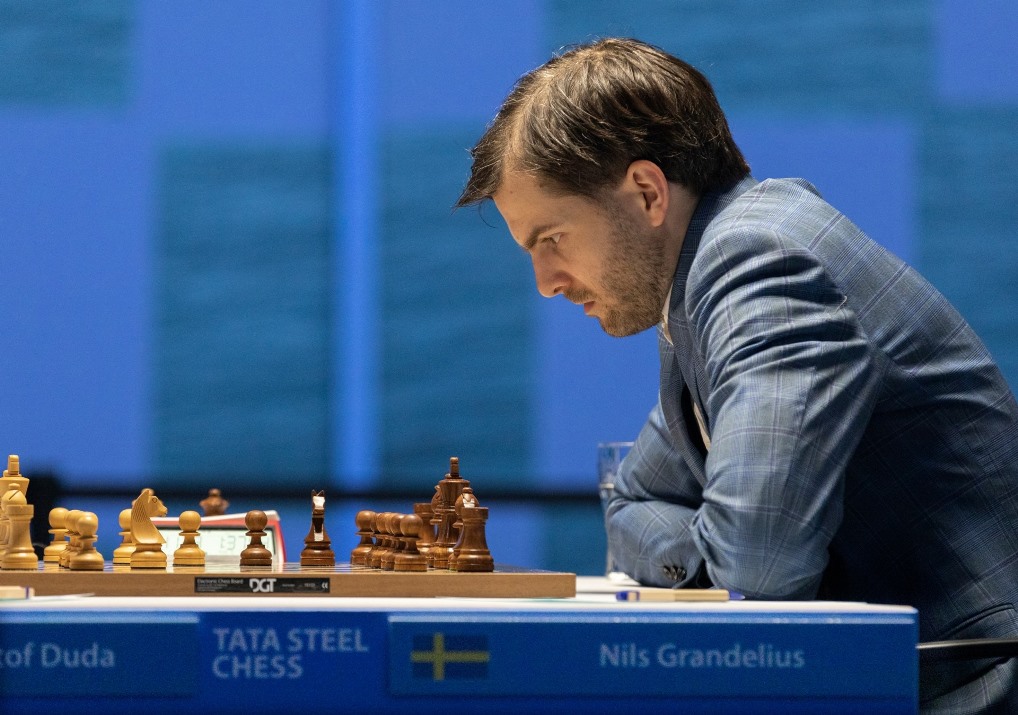 You can replay all the games from Wijk aan Zee using the selector below.

Don't miss the chance to Go Premium with the code TATA2021, which gives you 40% off all of our memberships! 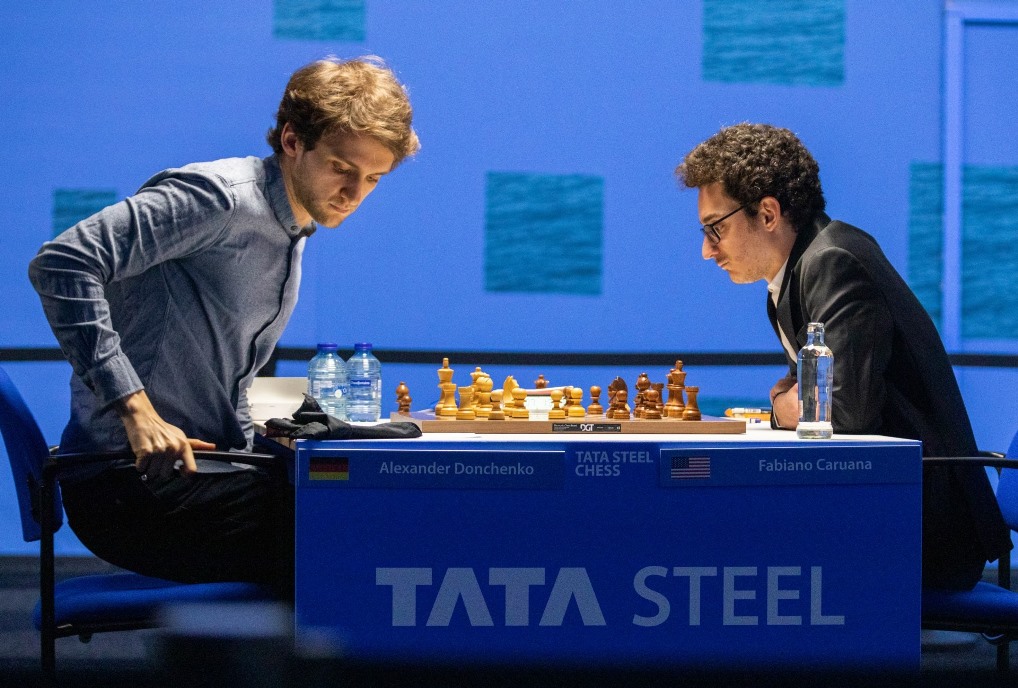 Fabiano Caruana came close to winning in Round 1 and made no mistake in Round 2 | photo: Jurriaan Hoefsmit, Tata Steel Chess Tournament 2021

World no. 2 Fabiano Caruana on Sunday showed the kind of play that saw him destroy the field in the 2020 Tata Steel Masters as he picked up his first win of 2021. His German opponent Alexander Donchenko repeated a line in which Fabi had got into difficulty in the Yekaterinburg Candidates Tournament against Anish Giri, but the US star came prepared with the novelty 11…a6. Alexander spent 10 minutes before going for an aggressive pawn push, but his continued ambition would eventually backfire as Caruana smoothly refuted those aggressive intentions.

The counterattack was much more powerful than the attack.

Here there’s just one winning move for Black, but it’s a scorcher! 26…Ba3!! and White is lost, since 27.bxa3 runs into 27…b2+ and Black wins either the queen on b1 or the rook on d4 with checks. Alexander put up heroic defence but couldn’t prevent the inevitable and has now started a tournament he was only invited to four days ago with two defeats.

Here’s Jan Gustafsson with in-depth analysis of an exciting game. 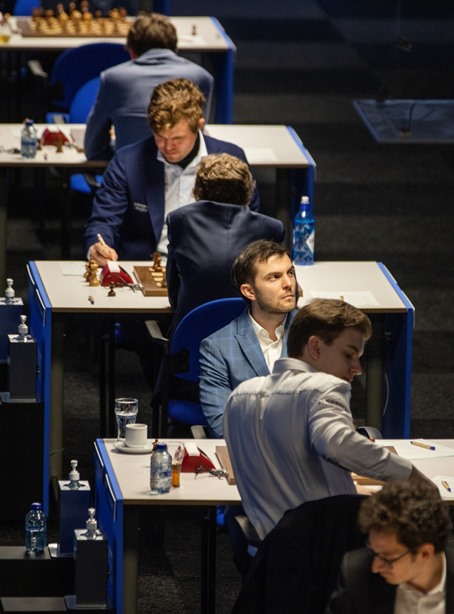 Swedish no. 1 Nils Grandelius is another player who’s playing in Wijk aan Zee as a replacement, but so far he’s more than justified his invite. He beat Donchenko in Round 1 and in Round 2 took full advantage of some loose opening play by Jan-Krzysztof Duda. The young Polish star followed up 1.c4 with an early b3 and a double fianchetto of his bishops. Nils commented:

I think he really wanted to beat me so he played something quite rare or quite strange, and I was lucky because I’m quite familiar not with this specific position, but with the same structure. I’ve played a lot of games, I know the plans very well, and he did not really find the best manoeuvres.

Nils was particularly critical of the “very slow” manoeuvre Nf3-e1-c2 and Qd1-d2, with Black taking over completely by move 14.

Duda is one of the more resourceful defenders in world chess, but this time he had no answer, with the computer claiming the final straw came on move 24.

It seems Duda could have gone after Nils’ queenside pawns with the cold-blooded 24.Qa5!, and that after 24…Re5 25.Nf4 there’s no winning attack for Black. That’s hard to believe, and in the game Duda instead went for 24.Qd1 Re5 25.Nf4 only to find himself compelled to give up a piece after 25…g5.

“It should just have been game over immediately, I think,” said Nils of the position after he’d won a piece, but although the game went on he made no real mistake as he went on to convert his advantage into a full point.

Magnus Carlsen among those held to a draw 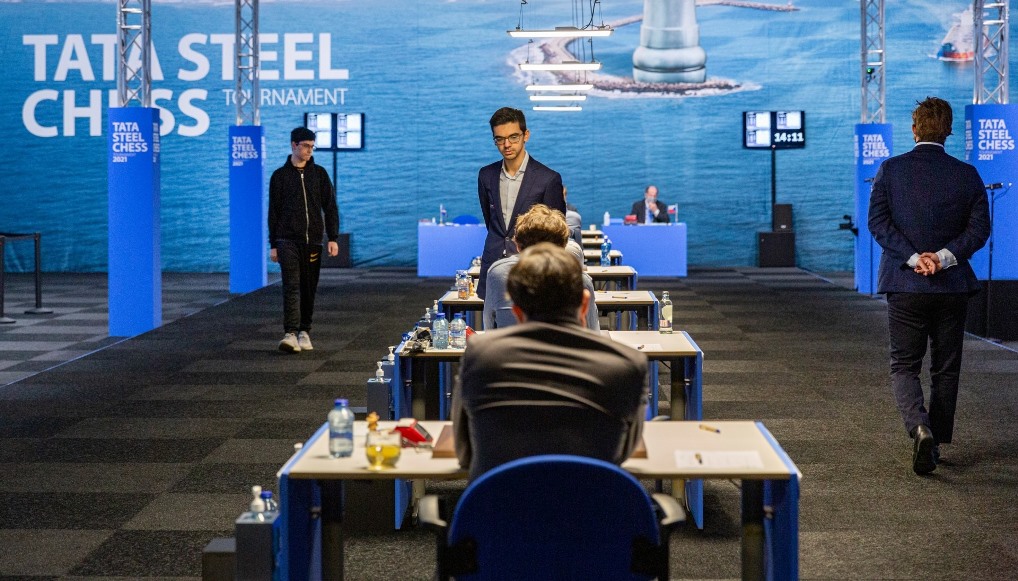 The remaining games were drawn, though there was some drama everywhere. Anish Giri was amused that his Dutch colleague Jorden van Foreest rejected a draw by repetition only to enter a worse ending a couple of moves later, but he felt his advantage was only symbolic. 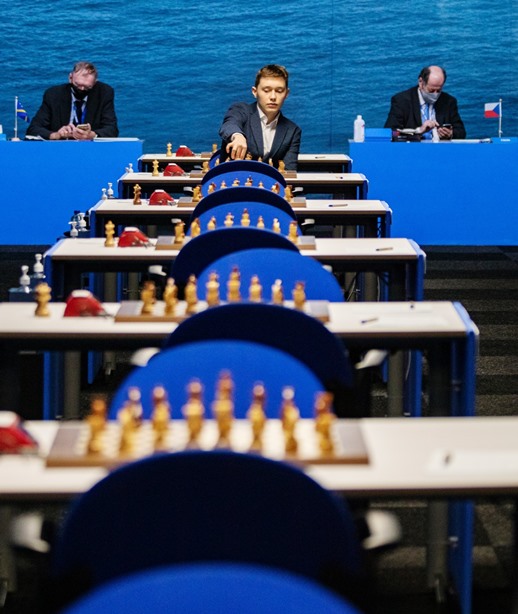 18-year-old Andrey Esipenko played the Caro-Kann against Harikrishna and ended up with a significant edge in the endgame, but it fizzled out into nothing. “It was a very complicated opening, the Caro-Kann - I love this opening actually!”, said Andrey, and 17-year-old Alireza Firouzja clearly feels the same as he used it as his weapon of choice against MVL. 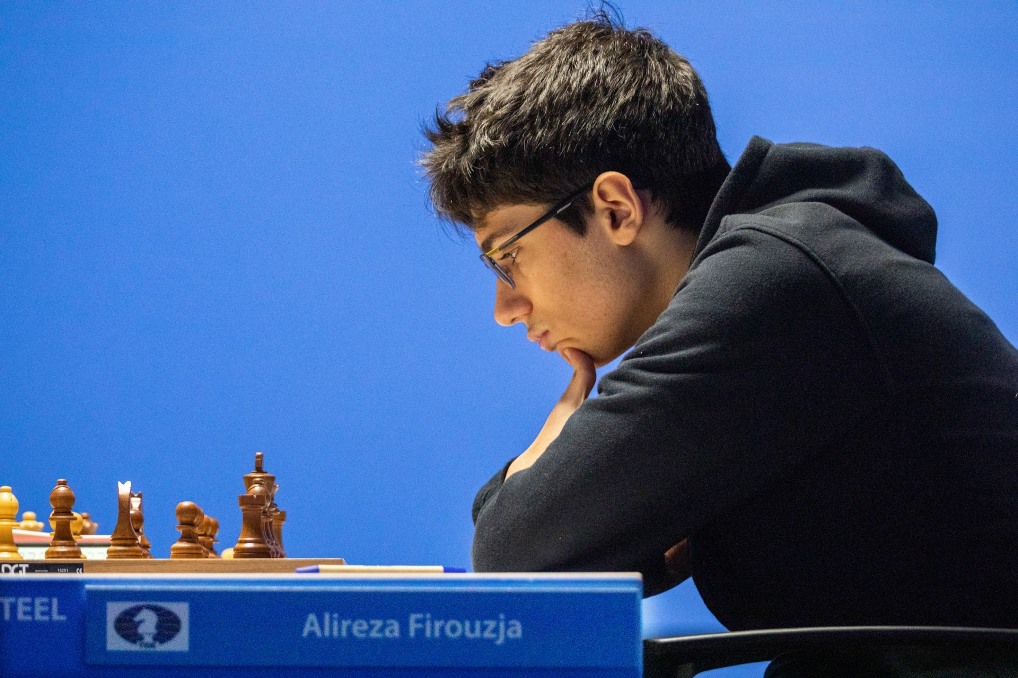 Alireza got into trouble, but the way he escaped was very much in the style of Maxime, finding a tactical solution to a difficult position. “Suddenly I just got lucky and every pattern was working for me!”, the Iranian said afterwards.

Here are the final moments: 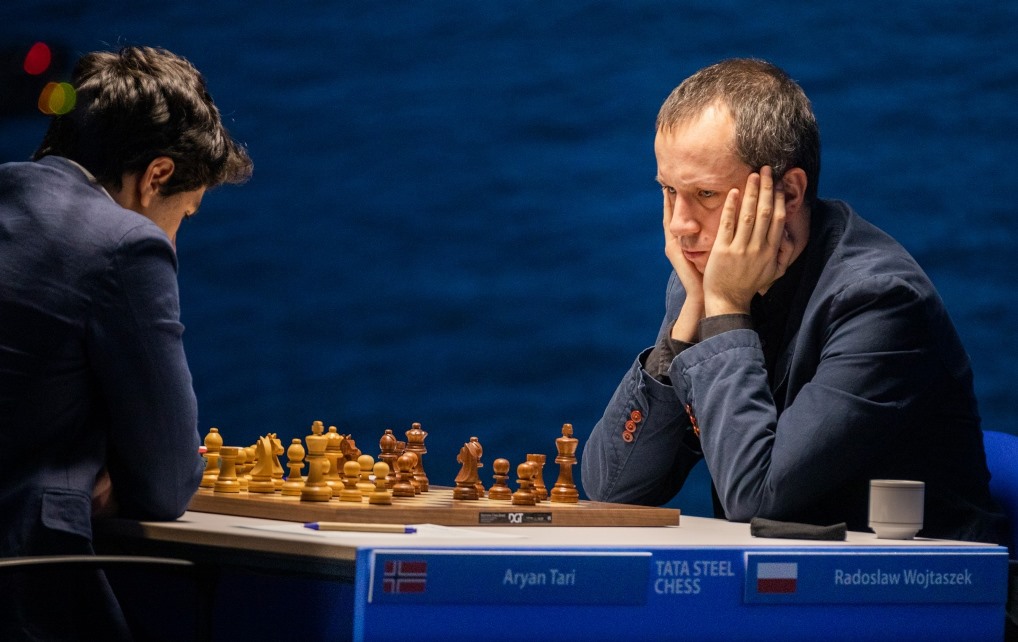 It was a tough day at the office for Radek Wojtaszek | photo: Jurriaan Hoefsmit, Tata Steel Chess Tournament 2021

The longest game of the day saw Radek Wojtaszek spoil a promising position against Aryan Tari and then get into real difficulties after the rash pawn advance 28…a5.

After the finesse 29.bxa5 Rxa5 30.g3! Aryan was simply able to pick up the pawn on b5 and felt his position at the time control “should be a technical win”. Our commentators felt the same, but a combination of the generous time control in Wijk aan Zee, inaccuracies by Aryan, and fine defence by Radek, saw the Polish star hold the position.

If Aryan was frustrated it was perhaps not as much as World Champion Magnus Carlsen, whose 69-move clash with Spanish Champion David Anton ended with bare kings. 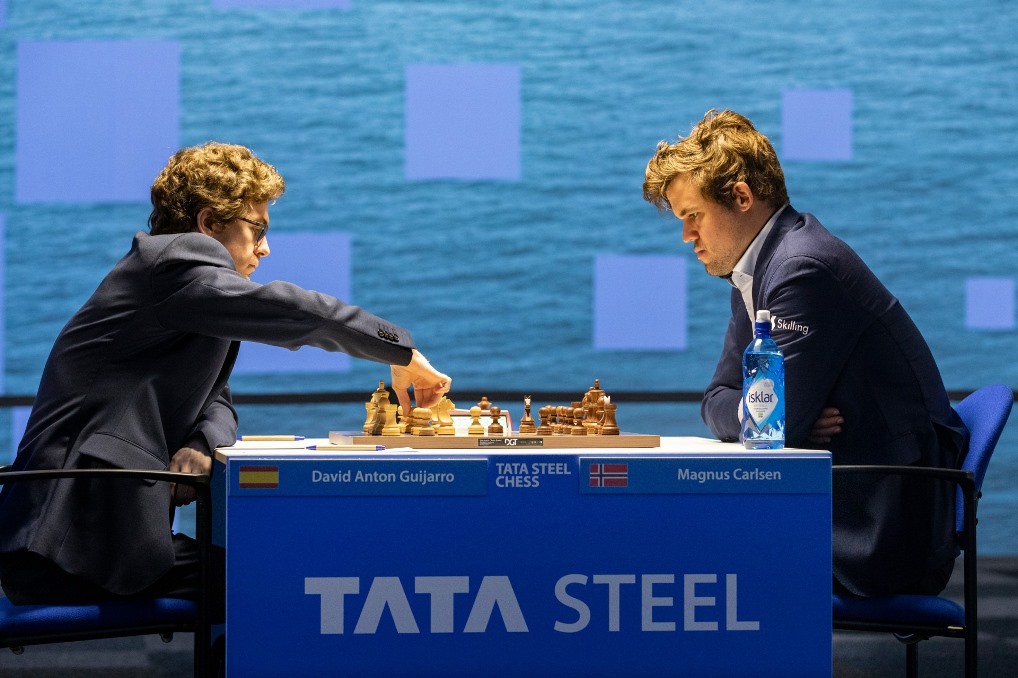 David varied on move 7 from a game Ian Nepomniachtchi had played against Magnus in their Skilling Open semi-final and got the Norwegian thinking, but soon things began to go wrong. It looked as though David was just where you don’t want to be against Magnus, condemned to the long defence of a ruined pawn structure.

Surprisingly, however, Magnus later went for a tactical sequence which only seemed to offer his opponent complete equality. He later summed up:

I felt from the opening that I was doing well, probably somewhat better, but it wasn’t so easy and after a while I think he equalised completely and there was nothing for me.

There were more twists ahead, however, as Magnus won a pawn and then felt he got “real chances” when David missed the “little trick” of 45…Kg5! 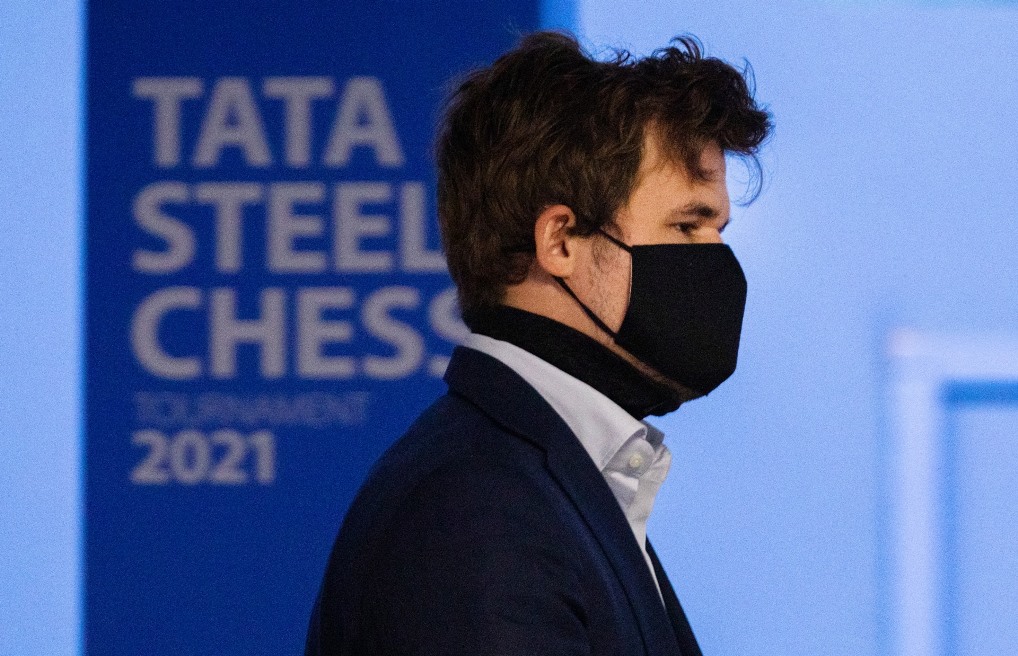 After 46.Ra7 Magnus felt he might be winning, but he also ran into a little trick later with 55.Kf5!

So a frustrating day for Norway left Magnus tied with Giri and Caruana half a point behind early Tata Steel Masters leader Nils Grandelius. 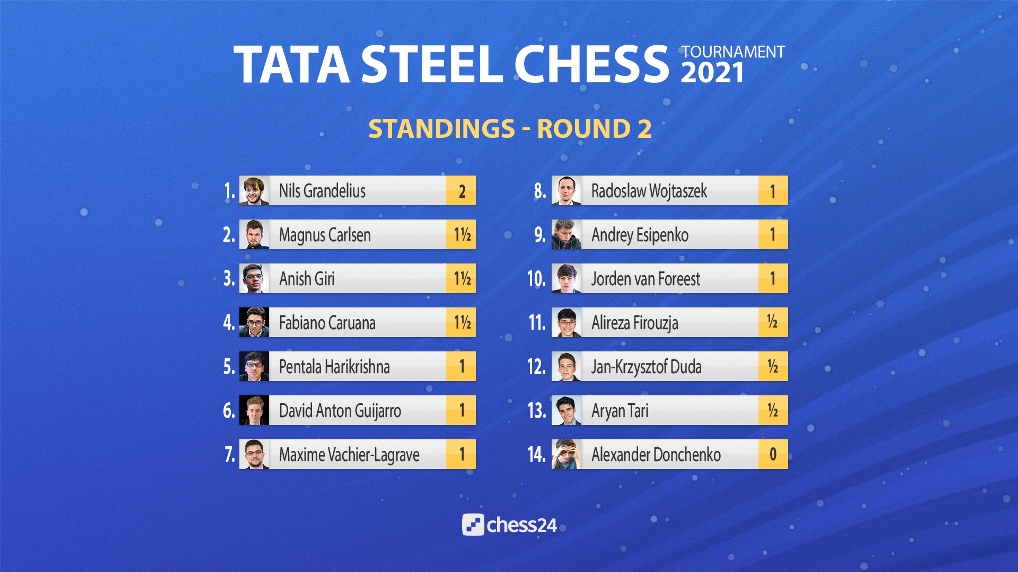 In Round 3 all the frontrunners have White, with Caruana (vs. Duda) and Carlsen (vs. compatriot Tari) out to build on big scores so far against those opponents. Grandelius, meanwhile, has a -2 score against Harikrishna. 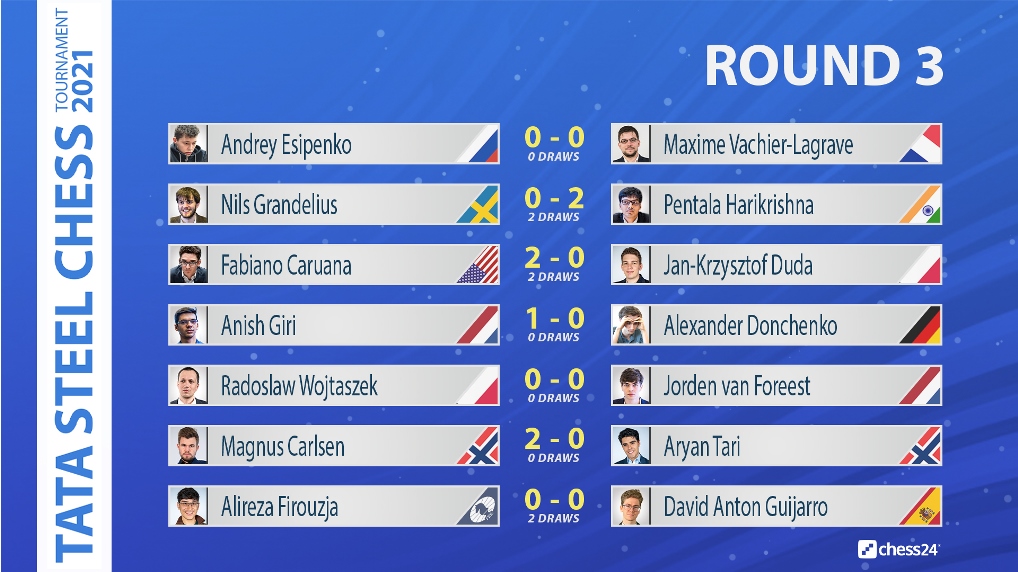 Firouzja, meanwhile, is hopeful of an easier life, describing his start against Magnus and MVL as, “probably the two best players in the tournament, and I was Black”. Will it get better now? “It has to!” He faces Anton in Round 3.