Dmitry Andreikin has joined Hikaru Nakamura in the lead of the Tashkent Grand Prix after demolishing Sergey Karjakin in Round 6. After what was a day of time trouble and wild swings the greatest surprise was that only one more game finished decisively – Shakhriyar Mamedyarov left Rustam Kasimdzhanov rooted firmly in last place. 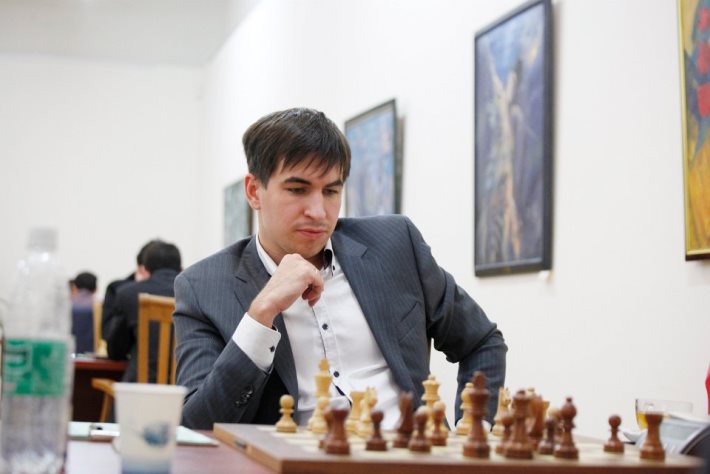 Andreikin remains unbeaten in Tashkent and has stealthily risen to the top of the pile | photo: Anastasiya Karlovich, FIDE

Only Giri-Radjabov failed to set pulses racing. Both players had drawn all their games to date and they seldom looked in danger of spoiling that record in a Berlin Endgame, although Giri, who had his first serious think on move 26, had a slight pull. The scoresheets were signed on move 52. 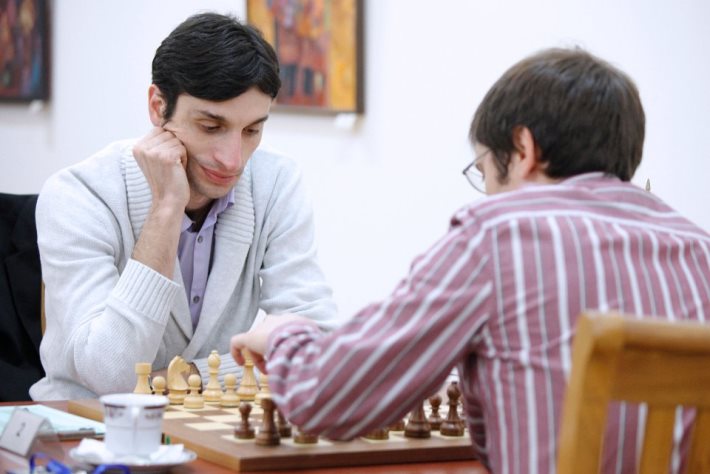 Elsewhere there was explosive action, with the move of the day perhaps coming in Jobava-Jakovenko. The Georgian no. 1 had said he was planning to play safely, but he was fooling no-one, and on move 12 a 35-minute think produced the following:

The bishop is on its way to h4, which would be an interesting manoeuvre in itself, even if it didn’t involve the sacrifice of a central pawn in the heart of White’s position. That brainwave looked fully justified after Jobava managed to pick off Black’s pawn on d5 in return, but the game swung from side to side in frantic time-trouble that was only cut short when Jobava offered a draw with both players 3 moves and 30 seconds short of the time control. 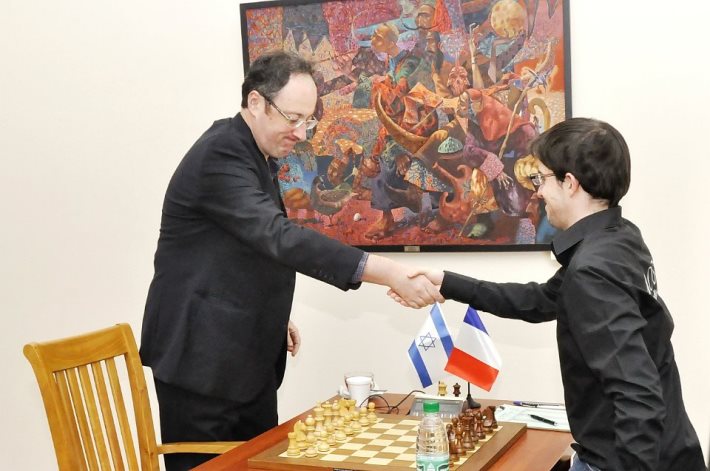 Boris Gelfand finally looked poised to make his mark in Tashkent after building up a huge pawn centre against Maxime Vachier-Lagrave, who seemed to have outwitted himself in the opening for a second day running. Once again, though, time trouble made it hard for White to hold everything together and by the time Gelfand played the plausible-looking 23.Rha1? (23.Rd1! was needed) it was already very tricky:

After 23…Nxd3 24.Kxd3 Rac8 25.Rc4 Be4 26.Ke2 there was 26…Rxd6 blowing open the white position. In the sequence that followed Maxime missed a precise line to retain strong winning chances, but a draw was a fair result. 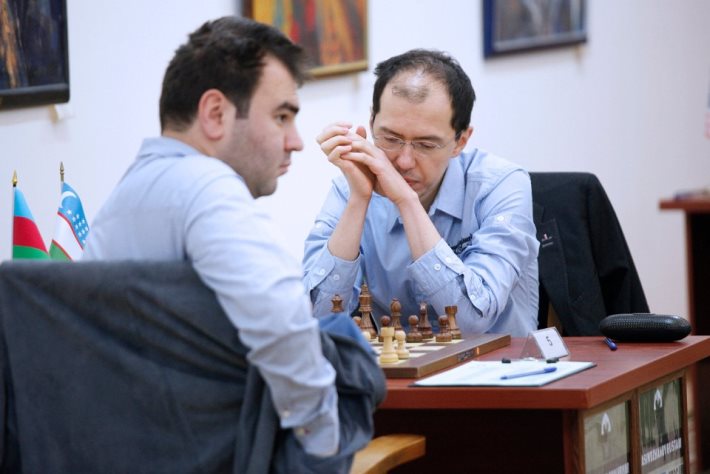 A game that could have gone either way | photo: Anastasiya Karlovich, FIDE

A draw would also have been fair in Mamedyarov-Kasimdzhanov, but life isn’t always fair. After losing two in a row Rustam had consolidated with two draws and now had every chance of picking up a full point against Shakhriyar, though perhaps it was simply that the Azeri star was more in his element.

Here 22…Rae8! is the move computers give as preserving a big black advantage, but the ensuing positions are hugely complicated. Rustam played 22…Rad8 and after 23.Nf6! no longer had an edge. The blunders that sealed his fate were perhaps explicable only by time trouble. 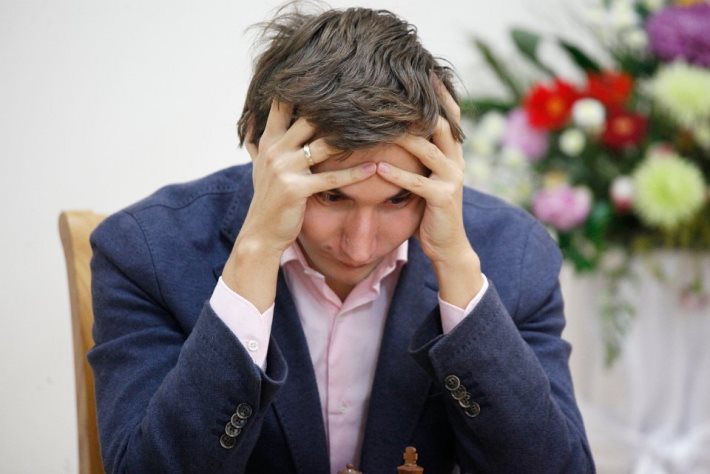 Kasimdzhanov is in bottom place, but he isn’t suffering alone. The man he coaches, Sergey Karjakin, endured a brutal loss to Jobava in Round 5, and the last thing he needed was to face another offbeat opening in Round 6. In the understandable desire not to end up in the same mess as the day before Karjakin used an enormous amount of time over the first dozen moves… but what followed was train-crash chess, annotated by Spanish IM David Martinez:

1. d4 ♘f6 2. ♘f3 e6 3. ♗g5 c5 4. ♘c3 A very enjoyable option in the Torre Attack. The game resembles more a sideline of the Sicilian than a Queen's Pawn opening. A welcome development!

7. e4 ♗xc3+ 8. bxc3 White's pawn structure has worsened but Black continues to have problems with the pin on f6.

10. ♖d1 ♖g8! The best way to prevent White from getting an initiative.

14... O-O-O , followed by d5, was the best option, when the position remains complex. Karjakin prefers to keep his king in the centre.

28... dxc5 29. ♗c4 The difference in the extent to which the positions of the white and black pieces were able to be improved is huge... Just compare move 18 and now! 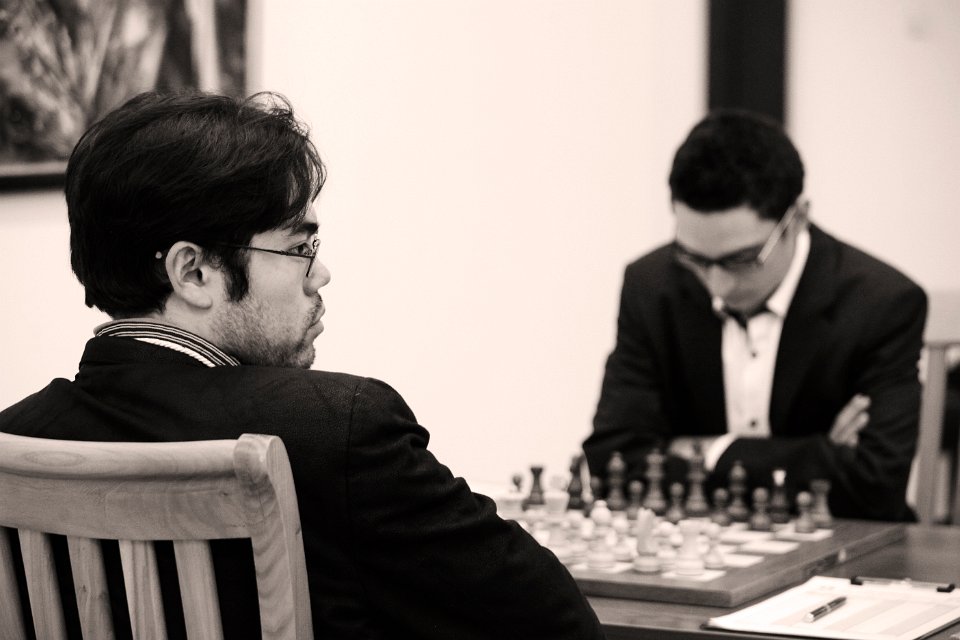 The clash between the two players who honed their aggressive styles on the tough American circuit | photo: Anastasiya Karlovich, FIDE

That leaves only the last game of the day to finish, the heavyweight showdown between Hikaru Nakamura and Fabiano Caruana. Was this finally going to be the day that the Italian ripped off his jacket to reveal the Super-Fabiano we’ve come to know and love? Well, it seemed that way for a while as he duly won a pawn against his opponent’s limp opening, but Nakamura is in the mood for grinding out results in this tournament. He levelled the game by move 50 and then actually had chances to pull off an unlikely victory – it’s often said that what matters in queen endings is not the number of pawns but how fast they can run, and Nakamura’s b-pawn was close to a touchdown:
Nakamura-Caruana after 59.Qc7

Caruana may be a shadow of his former self in Tashkent, but he’s still your man when you need precision – 59…h3! led to a draw by perpetual check six moves later.

So Nakamura continues to lead but is joined by dark-horse Andreikin, whose only other win came from a lost ending against Mamedyarov in Round 1. Caruana (1 loss), Gelfand (2 losses) and Kasimdzhanov (3 losses) are yet to win a game.

So we've crossed the half-way point of the tournament, but we still have five rounds to go. Don't miss the action here on chess24!