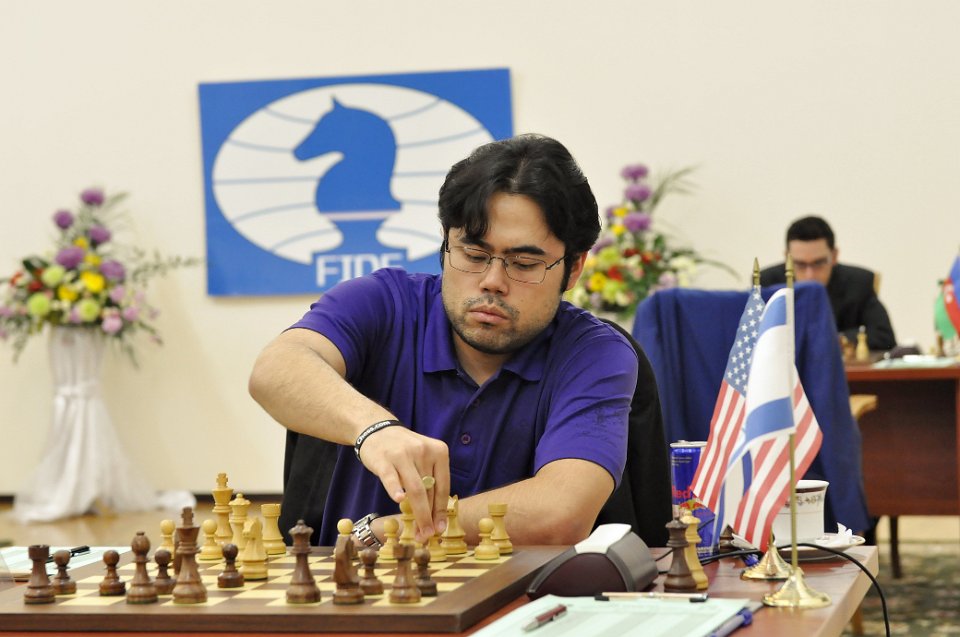 Hikaru Nakamura has snatched the sole lead in Tashkent after an epic 97-move victory over Boris Gelfand. The American no. 1 leapfrogged previous leader Maxime Vachier-Lagrave, who failed to hold a miserable position against Dmitry Jakovenko. It wasn’t all about grinding, though – Sergey Karjakin lived to regret inviting Baadur Jobava to sacrifice a bishop, since the resulting position proved hugely tough to hold for non-silicon-based life forms. 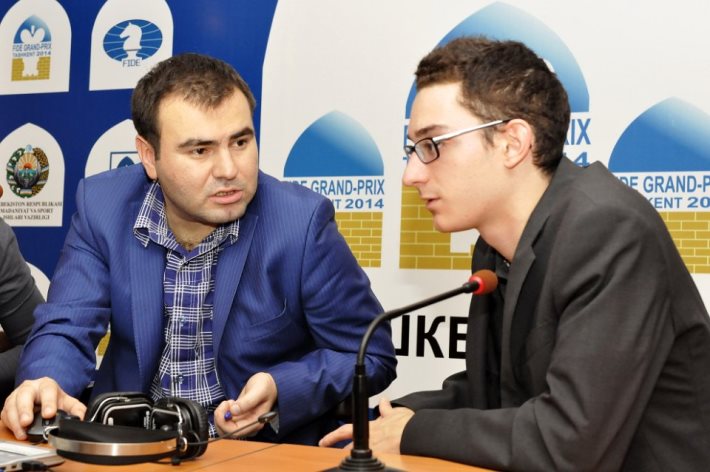 It's almost as if Fabiano Caruana has decided to leave the limelight to others, for a change, in this event | photo: Yulia Manakova, FIDE

Let’s get the draws out of the way first. The first game to finish was Caruana-Mamedyarov, which for Mamedyarov was a huge improvement over his previous encounters with Caruana (see, for instance, the massacre in Baku). In fact it was the out-of-sorts Italian who needed to play with precision to secure the draw.

Radjabov-Andreikin was a Berlin Defence that was mainly notable for the fact that Andreikin managed to spend 55 minutes on 21…Nd5, a move that had already been played by no lesser player than Sergey Karjakin against no lesser player than Viswanathan Anand in no lesser event than the Khanty-Mansiysk Candidates Tournament earlier this year – an event where Dmitry took part. All somewhat puzzling, though the outcome was still a draw. 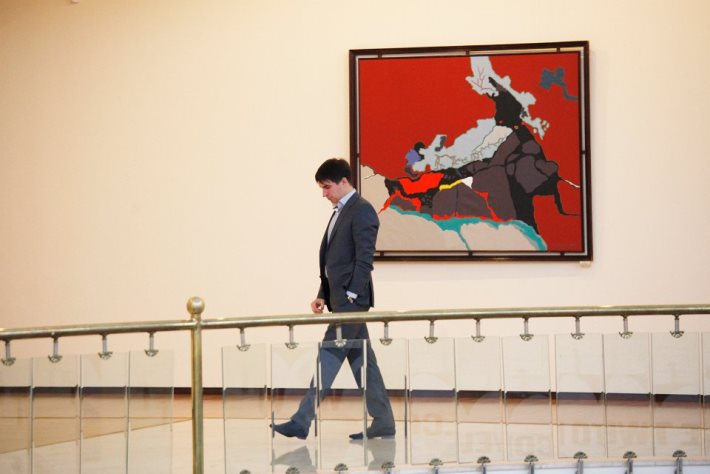 You might say Dmitry Andreikin's opening play has the unpredictability of an artist... | photo: Anastasiya Karlovich, FIDE

Kasimdzhanov-Giri was the most interesting of the draws, with Rustam playing a pawn sacrifice early on that ultimately gave him a dangerous passed d-pawn and positional domination. Giri was able to hold, though, with his bishop suddenly springing to life on move 33 – it would make 12 of the Dutchman’s remaining 13 moves! 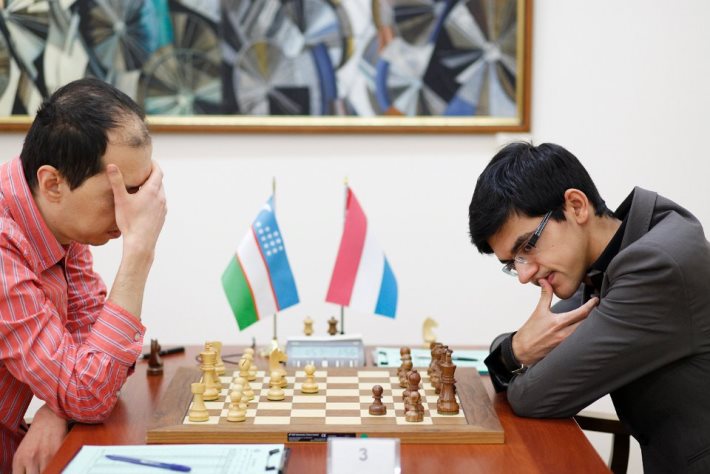 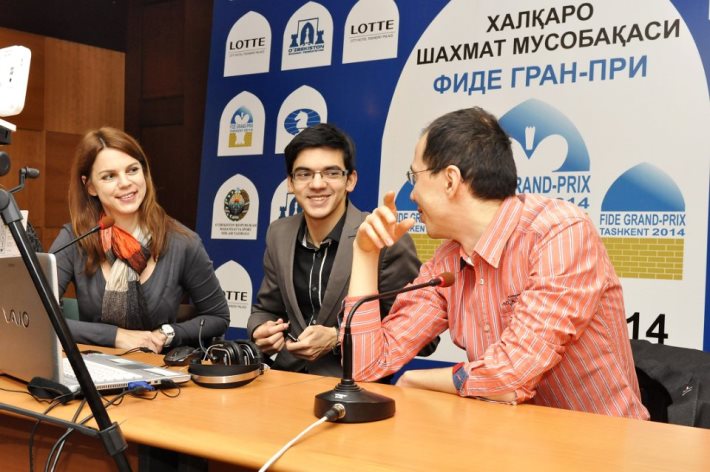 ...but you can laugh about it afterwards! | photo: Yulia Manakova, FIDE

After all the other games had finished drawn in the previous round Maxime Vachier-Lagrave was still playing a pawn up against Sergey Karjakin, with a gilt-edged chance to open up a full one point lead. Instead he had to concede a draw and, as so often in football, if you fail to score when you’re on top you get punished. 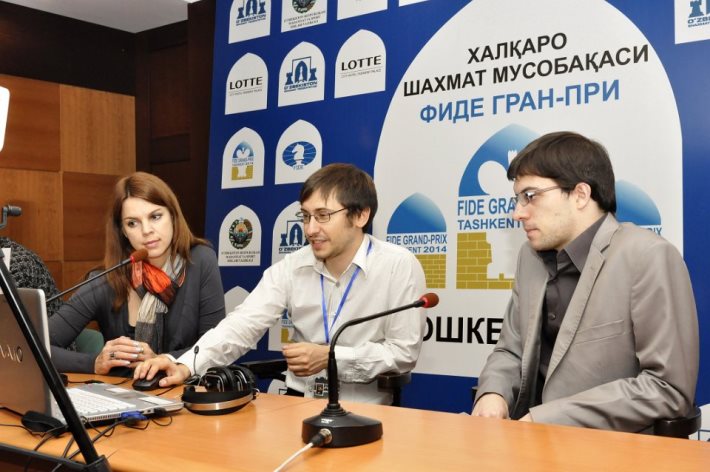 It was self-inflicted suffering, though, as Maxime repeated a line he’d played against Gajewski which didn’t seem to promise much. Or as Jakovenko put it:


Black is just fighting for a draw with almost no chance to win and no guarantee to make a draw.

“If you don’t remember the line it’s a tough day” was Maxime’s initial explanation, although later in the press conference he seemed to say he’d known the drawing line but decided against it in fear of something he’d forgotten to check.

There was similarly confused reasoning at the last moment the game might have been held:

Maxime wanted to play 23…Nf3+ 24.Kf1 Rc2 but then realised there was 25.h4!, trapping the knight. After thinking for only six minutes he instead chose 23…Ng4? and after 24.Bxa7 it was only a matter of time before Jakovenko’s connected passed pawns rolled to victory. Jakovenko pointed out, though, that after 23…Nf3+ 24.Kf1 Nh4! it's far from easy – the a7-pawn lives to fight another day. 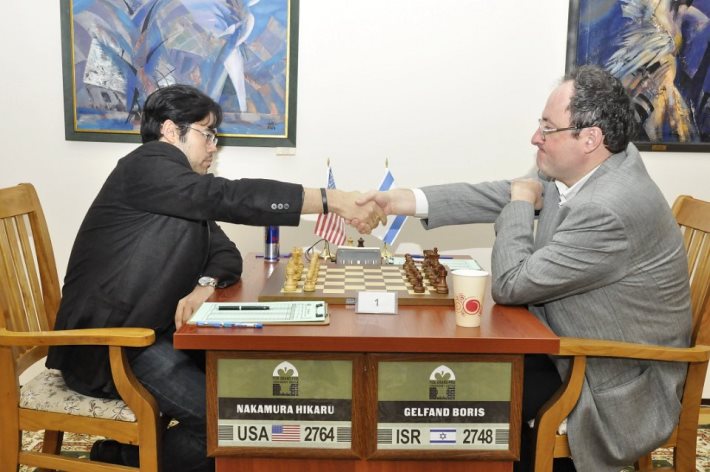 At this point it should be noted that the theory that if you fail to score in your opponent’s goal you usually go on to concede in your own doesn’t always hold true! A case in point is Hikaru Nakamura, who fought on all the way to a king + pawn vs. king stalemate in his Round 3 game against Anish Giri. Nakamura repeated that scenario in Round 5 against Boris Gelfand, and for 87 moves it seemed as though the outcome might be the same. Then Boris, down to two minutes or so on the clock, finally cracked:

87…Ng5? Suddenly the e-pawn is allowed to advance, and after 88.Rxf6+ Kg8 89.e5 it was all but over. It would still have been a huge challenge for Nakamura to break through after 87…Kg8!

There was an amusing end to the post-game press conference. When Anastasiya Karlovich asked Boris what had gone wrong he responded only, “Probably I made a mistake!” The FIDE Press Officer then suggested the sudden change of weather - from autumn to winter - had influenced proceedings, but Nakamura had a more down-to-earth explanation:

After playing for six hours… Boris of course is not so young. 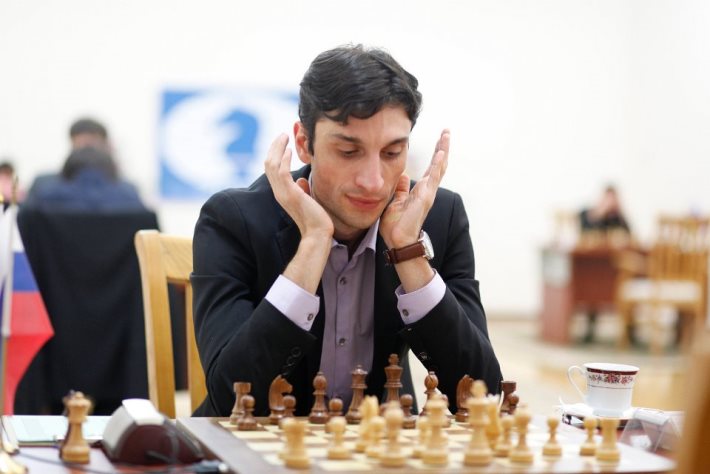 Baadur Jobava was (as always) in the mood to sacrifice | photo: Anastasiya Karlovich, FIDE

Sergey Karjakin misplayed the opening and then invited his opponent to sacrifice a bishop – Jobava joked that he never needed to be asked twice normally, and especially here where he saw he had a draw in his pocket.


Spanish IM David Martinez takes a look at how things turned out:

1. e4 c6 2. ♘f3 d5 3. ♘c3 This variation, recommended by Paco Vallejo in one of his Spanish videos for chess24, is ceasing to be a secondary line and becoming a fully viable option to complicate play early on. Highly recommended!

7. ♗e2 ♕c7 8. d4 ♗d6 9. O-O O-O 10. h3 Natural, restricting the options of the c8-bishop, but a few moves later that bishop will take its revenge by sacrificing itself on h3! Knowing what happens it would have been better to omit this move.

16. ♗d2 Accepting the challenge, although Black's position is certainly going to be easier to play.

16. ♗f1 would have stopped the sacrifice, although the bishop would be left somewhat passive. I think that Jobava, in his trademark style, would have gone for Bf4 followed by g5 at some point.

17. gxh3 ♕xh3 The black knight is threatening to join the party, via h4, so Karjakin's next move is forced:


18. ♗xg6 hxg6 19. ♖e3 The rook manages to help out along the third rank, but the bullying continues!

19... g5 The black attack is neither direct nor concrete, but it's very dangerous and also correct! In such positions even a world elite player like Karjakin can lose his way in the sea of variations.

20. c5 A mistake, although it was very difficult to evaluate and calculate.

20. ♘e5 was the improvement Karjakin suggested in the press conference, and I think he was right. 20... ♕c8 21. ♔g2! Returning the piece, but also managing to turn the tables. Now it's White who can pose problems to the black king. 21... fxe5 22. ♖h1! The position is extremely complicated since White is going to be left a pawn down but with a very dangerous initiative.

22... ♕h5 The only move of Jobava's that you can criticise in the whole game.

23. ♔g2? A very natural move, but Jobava refutes it precisely! 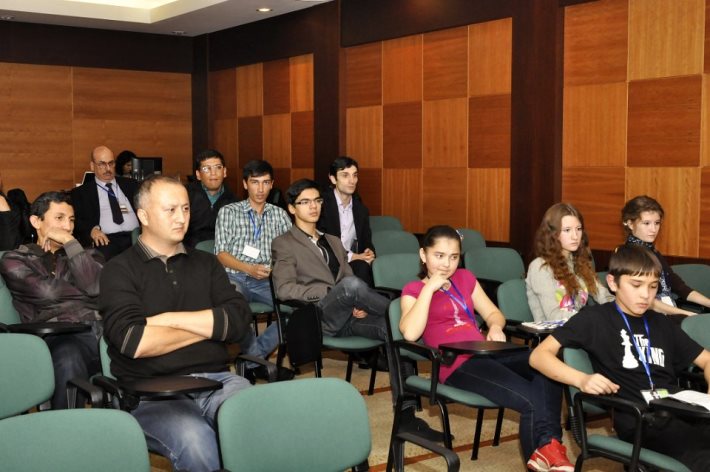 Jobava, a grandmaster who stands out from the crowd (usually!) | photo: Yulia Manakova, FIDE

So with the overall leaders of the Grand Prix - Fabiano Caruana and Boris Gelfand - at the bottom of the scoretable, it’s absolutely everything to play for. Remember that this time round all Grand Prix results count, though also remember we still have six rounds to go!

The big showdown in Monday's Round 6 is Nakamura-Caruana. Don't miss the action here on chess24!