Maxime Vachier-Lagrave is the early leader of the Tashkent Grand Prix after beating Rustam Kasimdzhanov to move to a perfect 2/2. All the other games were drawn, though Baadur Jobava must have used up at least one of his lives to emerge unscathed from an opening catastrophe against Fabiano Caruana. 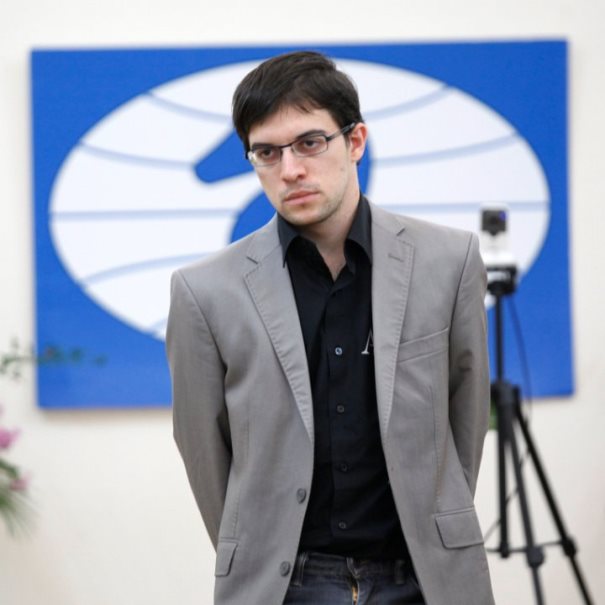 It was a day of quickfire action in Tashkent, though not all of it was spectacular. Blink and you might have missed how Round 1 winners Dmitry Andreikin and Hikaru Nakamura shared a point in a known drawing variation. 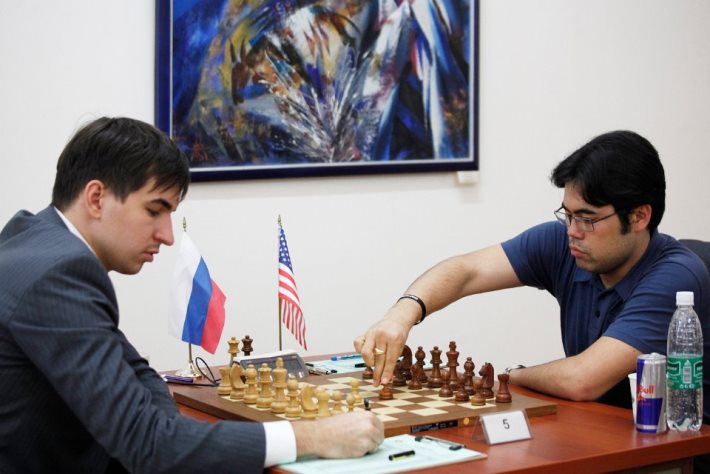 It was possible to understand the players, though, since they both came straight from Baku. Nakamura is quoted by the official website:

I cannot complain about my tournament situation after two games. It's nice to make an easy draw with Black and rest since we’ve been playing non-stop for the last few weeks.

A much stranger case was Giri – Mamedyarov. 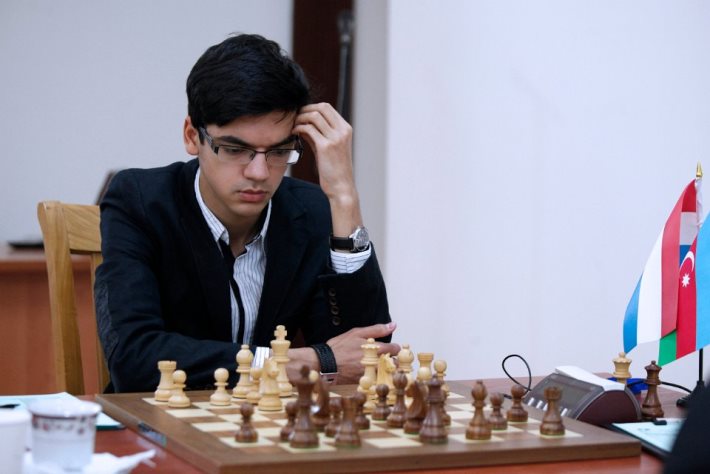 Now Anish Giri is renowned for superlative deep opening preparation, but in this game he barely had to scratch the surface. In Round 1 Mamedyarov achieved a winning rook ending with the white pieces against Dmitry Andreikin. He contrived to lose, but you can still see why he’d be willing repeat the opening as Black against Giri. It was more puzzling, though, that he was surprised by a new move he’d surely have spotted if he’d simply scrolled through the game here at chess24! 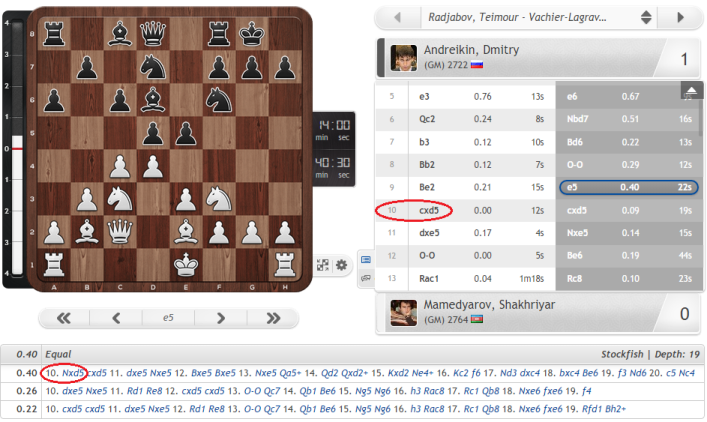 As you can see, 10.cxd5 is the move the computer thinks throws away all White’s opening advantage (0.40 becomes 0.00) and 10.Nxd5 is its recommendation. And lo and behold, in Round 2 Giri played 10.Nxd5. Mamedaryov’s reaction? 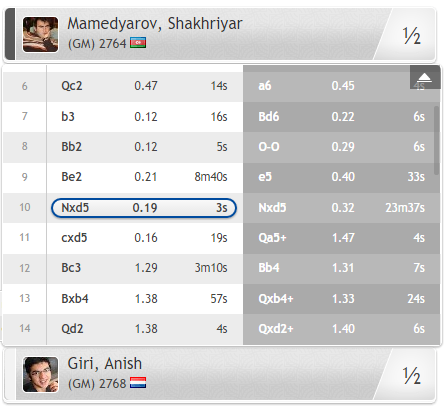 Yes, as our broadcast also shows, he sank into a 23 minute 37 second think and had a close to lost position two moves later. After that, though, he kept on playing at lightning speed even after the initial forced sequence was over. Did he know something we didn’t? Well, not according to his comment at the post-game press conference:

I wanted to resign immediately after we got this endgame.

He resisted the urge, though, planted his king firmly in the centre of the board, and managed to hold with relative ease. It was Anish who was left to do all the thinking, but the young Dutchman failed to find a killer blow. 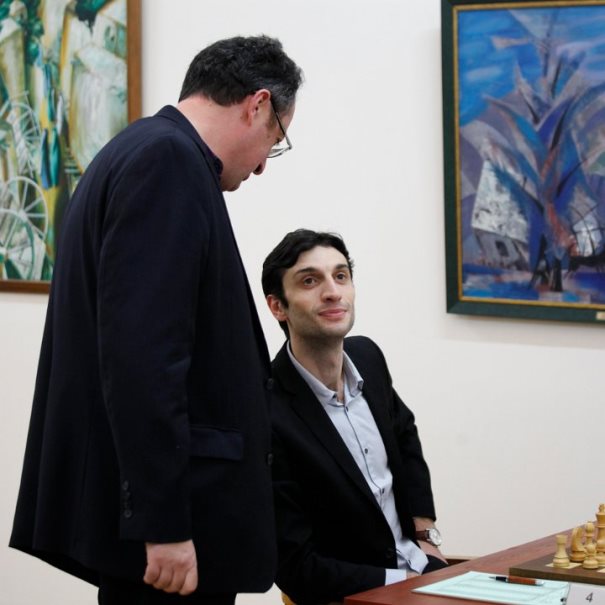 If that was a close shave for Mamedyarov it’s hard to find words for what Baadur Jobava went through against Fabiano Caruana. It’s tempting to put the blame on Jobava’s eccentric opening 1.e4 e5 2.Nf3 Nc6 3.Be2!?, but we actually christened that the “Jobava Variation” after the Georgian used it to beat Gata Kamsky and Peter Svidler at the Russian Team Championship earlier this year. Jobava responded when asked if it should be named after him:

No, I don’t think so. It’s simply that I play the Philidor with Black and it doesn’t go badly; so I decided that it should be even better with an extra tempo. I don’t have any hidden weapons so I can’t show them off! Instead I try to get elite players out of theory so they’re thinking on their own - so we’re on an equal footing. If I’m going to lose, then let it be in an equal struggle!

But getting Caruana out of theory didn’t work so well since after 9.0-0? b5! Jobava was more or less lost.

He saw nothing better than going down the rabbit hole with 10.Qxb5 axb4 11.exd5 Na5 12.cxb4 Bd7 and giving up his queen for a rook and knight with 13.Qxa5. In hindsight it may have been a mistake for Caruana to allow that option, since Jobava managed to build a fortress. There were still chances for the world no. 2 to break through, but it certainly wasn’t easy.


Gelfand-Karjakin and Jakovenko-Radjabov were forgettable draws, which leaves us with the day’s only decisive game. 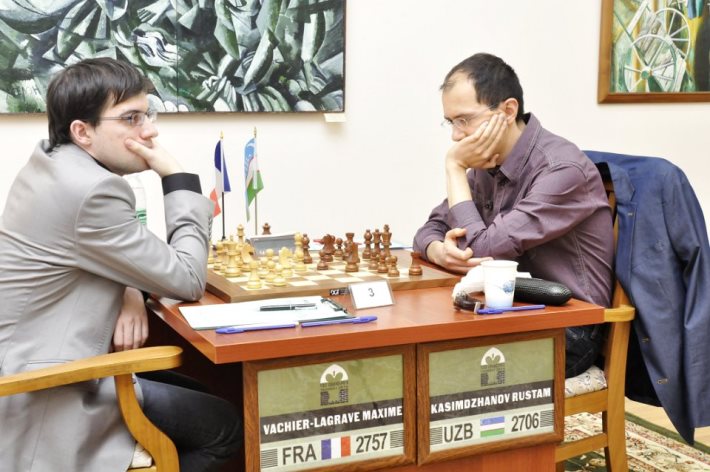 Vachier-Lagrave is the only player still in with a chance of a Caruanaesque winning streak | photo: Yulia Monakova, FIDE

11. ♘xb6 cxb6 12. bxa5 ♘xa5 The doubled b-pawns remain this way until the end of the game and are a real cancer eating away at the black position, although they're far from his only problem.

13. h3 d5 Trying to become active and generate counterplay, but this emphasises the weakness of e5 - something Vachier-Lagrave masterfully exploits.

20... ♖xd3 21. ♕xd3 ♕xa1+ but he must have considered the ending lost. The weak b-pawns have gone nowhere and White's plan could be to put a knight on d5 (a slow manoeuvre!) and then combine pressure on b6 with an attack on the kingside. 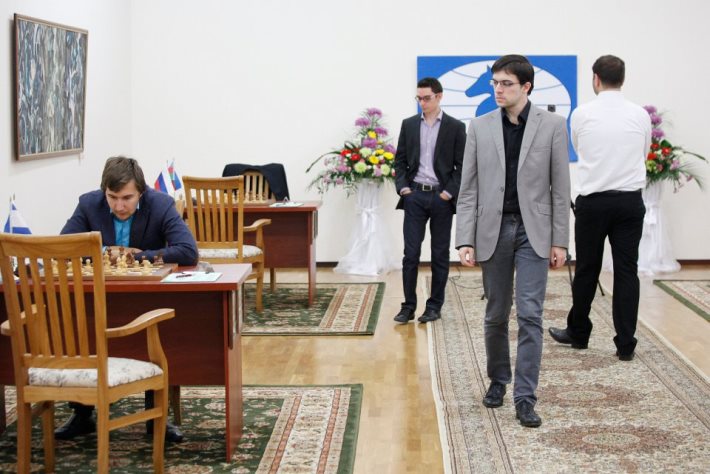 Maxime at the head of a pack of prowling GMs | photo: Anastasiya Karlovich, FIDE

So all players are now off the mark, Vachier-Lagrave leads and a rested Andreikin and Nakamura are in hot pursuit.