If you share your year of birth with World Champion Magnus Carlsen and such stars as Sergey Karjakin and Maxime Vachier-Lagrave it’s not enough to be rated over 2700, win the World Junior Championship in 2010, the Russian Championship in 2012 and finish runner-up in the 2013 World Cup – you’re still going to be playing second fiddle. Now, however, Dmitry Andreikin has taken another step forward in his brilliant career, scoring a very convincing win in the Tashkent Grand Prix. 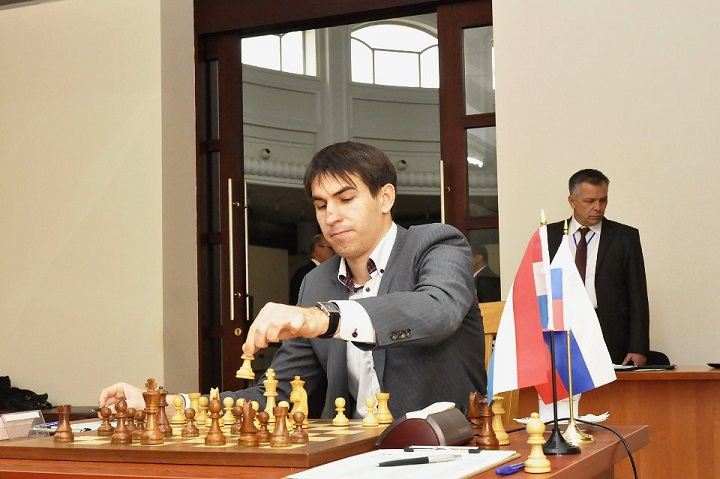 The Russian perfectly combined his habitual solidity with precise play. That allowed him to punish Jobava's audacity while also demonstrating imaginative opening play against Karjakin and having some “champions’ luck” when he beat Mamedyarov from an almost lost ending in Round 1, a game that ultimately proved crucial for the final standings.

While in the final round Andreikin secured a quiet Queen’s Gambit draw against Giri, there was a real show on the surrounding boards, as various players were willing to risk all to make it one of the best days of the event.

With all due respect to the winner, Azerbaijan’s Shakhriyar Mamedyarov played the best chess of the tournament, while Baadur Jobava is of course the other player who’s stood out from the crowd. Their game in the final round was an ode to chess! We take an in-depth look below:

1. d4 ♘f6 2. c4 c5 3. d5 e6 The Benoni is one of the major weapons for playing for a win against 1. d4, since it sets up an asymmetric centre and involves great complications. Currently there are a number of lines that are considered somewhat better for White, but in each case with complex play.

8... O-O 9. ♗d3 b5 The main response, aiming to seize the initiative at the very first opportunity.

10. ♘xb5 Again the most critical move. The other capture seems to have slipped out of fashion, since Black has good compensation after the following variation:

10... ♘xe4 And, of course, Mamedyarov also responds with the move currently considered to pose White the most problems. Previously it was thought that after

13. ♘c3 ♗a6 Preventing the white monarch from taking refuge on the kingside. It will now always be under attack, either in the centre or on the queenside, but all this comes at the cost of a piece - no laughing matter!

16. O-O-O ♘e5 There are no direct threats, but danger is looming for the white king position. Shak keeps a cool head.

17. ♖he1 ♖ec8 After thinking for 15 minutes Mamedyarov goes for this move, which avoids exchanges on the e-file and increases the pressure on the white king position, since X-Ray attacks along the c-file always have to be kept in mind.

18. ♘a4 Aiming both to gain a tempo by attacking the black queen and also overprotect b2.

19. f4 Jobava is no slouch either - he responds with two precise shots.

19... ♘c4 20. ♗f5! A beautiful move! The bishop can't be captured and displacing the black rook from the c-file makes it possible to capture on b4.

20... gxf5⁇ 21. ♕xf5 leaves little to say - the black king succumbs to the always dangerous coordination of a queen and knight.

22. ♕b3! , returning a piece in order to halt the attack on the queenside, was the most precise option. After 22... gxf5 23. ♖e7 Black would still have to try and justify being an exchange down, which isn't so easy.

25. ♖b1! No doubt Jobava missed Qg3, or at least failed to evaluate it correctly, but he goes on to find the only defence.

37. ♕h5 he can only force a draw since White is also threatening mate.

37... ♕g1+ A great fight and, above all, an extremely beautiful game between two of the most brilliant creative players in world chess. 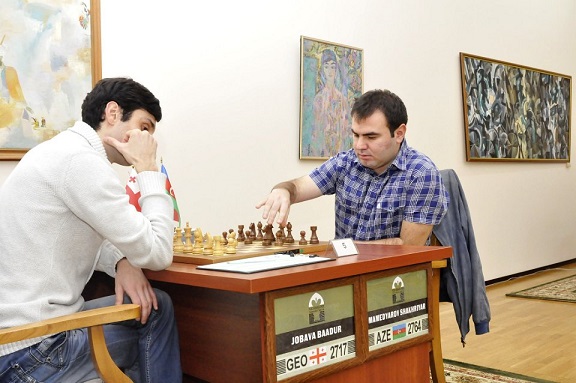 A spectacular final battle between the most creative players of the tournament | photo: Yulia Manakova

There were two decisive games in the final round in Tashkent. Fabiano Caruana exhibited a tremendous will to win right from the off, which led him to abandon his traditional systems and achieve a really picturesque position after only a few moves:

The closed nature of the position meant that White was unable really to exploit his space advantage and pair of bishops. Jakovenko had failed to find a way to break through into the black camp and was slightly worse when he committed one of the blunders of the tournament:

By playing 27.Qg5?? White hopes to pin the knight, but he’s actually just losing a pawn after the simple 27...Nxd5. 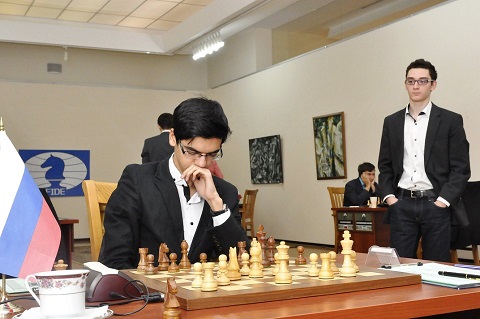 For once Caruana wasn’t among the main protagonists in the final round of the event | photo: Yulia Manakova

The other victory was scored by Karjakin against Kasimdzhanov. Rustam wasn’t at his best, perhaps due to the fact that it’s difficult to play against someone you work with. 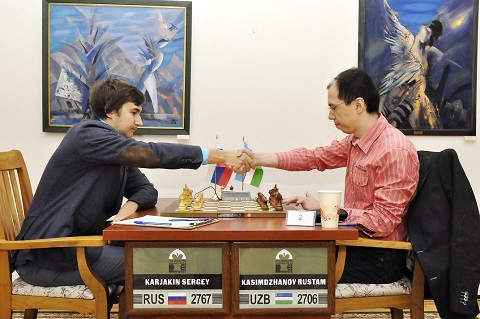 After many hours of work together it’s difficult to meet at the board! Karjakin adapted better and scored a vivid win against his analyst | photo: Yulia Manakova

The final standings were as follows:

Now the Grand Prix series will take a break until mid-February, when Tbilisi Batumi will host the third of the four tournaments. It's fair to say the players were breathing a sigh of relief! For instance:

Neither player had much to complain about in the overall Grand Prix standings, with Fabiano Caruana still out in the lead. Note that Gelfand's victory in Baku keeps him up in fourth place despite his finishing last in Tashkent, although note also that half the players have only played in one stage:

There won’t be any chance of suffering elite chess withdrawal symptoms – the Tashir Chess Petrosian Memorial is just about to start, and of course there’s the minor matter of the World Championship to be cleared up in Sochi in a week’s time!