Sergey Karjakin warmed up for the Candidates Tournament in style with a supreme performance in the Tal Memorial blitz, winning eight games and losing just one on the way to taking first place ahead of Hikaru Nakamura. No-one else could match that consistency, with fast starters Vishy Anand, Dmitry Andreikin and Vladimir Kramnik fading badly, while Candidates top seed Shakhriyar Mamedyarov finished second last after managing to win just two games out of 13.

The Tal Memorial Blitz was a 14-player 5+3 blitz tournament that took place in the Botvinnik Central Chess Club in Moscow on 5th March. You can replay all the games using the selector below – click a result to open the game with computer analysis or hover over a player’s name to see all his results:

Former Women’s World Champion Alexandra Kosteniuk joined Evgeniy Miroshnichenko for the English live commentary, which you can replay below:

Vishy Anand seemed set to continue where he’d left off in rapid chess as he outplayed 20-year-old birthday boy Vladislav Artemiev in Round 1 and then punished Alexander Morozevich for daring to play the King’s Gambit against him in Round 2. After two rounds only Dmitry Andreikin could match that pace, and in fact Dmitry would race to 4.5/5: 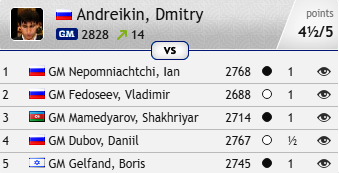 Remarkably, though, Andreikin wouldn’t win another game in the remaining 8 rounds, suffering four defeats. The wheels fell off when he stumbled into mate against Hikaru Nakamura in Round 6 in a position where he could force perpetual check…

…while in Round 7 he threw away the chance to bounce straight back against Alexander Grischuk:

It was a similar story for Vishy, who only won one game after Round 2 and compounded his misery by ending with a loss on time to Vladimir Kramnik that left the Indian legend on a minus score for the blitz tournament.

Kramnik himself was another fast starter, opening with 4/5, including what turned out to be the day’s only win over Sergey Karjakin. Kramnik looked to have decent chances of getting revenge for his last round defeat in the rapid tournament, though 35…Rxd6?? was a huge helping hand:

36.e5! wasn’t the toughest tactic Vladimir has ever had to spot, though his 42.Rxb2! to end the game featured some nice geometry:

In the first 8 games Kramnik suffered only one defeat, to Daniil Dubov, in a game that featured a similarly attractive finish:

Kramnik has White and is planning Nf6-h7, queening the f-pawn. Dubov can queen his a-pawn as well and draw, but he found a much more appealing option – 47…Be8! White resigned, since the f-pawn is eliminated and the a-pawn will decide the game.

Kramnik’s chances would finally slip away between rounds 9 and 11, when he lost three games in a row, including thrillers against Grischuk and Nakamura. The game with Hikaru featured another beautifully unusual bishop move:

Kramnik later had winning chances, then should have held a draw, but pressed too hard and fell to defeat. He was unhappy with losing on time (perhaps there was a clock malfunction), but his position was already in ruins by that point:

As mentioned, that blunder and loss to Kramnik was Sergey Karjakin’s only loss of the day, and indeed of the whole Tal Memorial. While he’d looked rusty in the rapid section, missing chances in the eight draws he scored at the start, in the blitz he was unstoppable, showing the kind of form that saw him become the 2016 World Blitz Champion or start the 2017 St. Louis Rapid and Blitz with 10/11.

Despite the loss to Kramnik he opened with 6.5/8, with the last two games of that sequence proving vital to the overall standings. He stylishly outplayed the two players who would share a place on the podium with him, demonstrating a combination of smooth positional chess and razor-sharp tactical vision. First up was Hikaru Nakamura:

Ian Nepomniachtchi was up next for Karjakin, and had come into this game after three consecutive wins himself, over Morozevich, Anand and Svidler. Once again Sergey met an attack by a black piece with a surprise tactical shot:

Karjakin’s only challenge in the later stages of the tournament came from Nakamura, but the US star struggled in his last three games, holding three tough draws from bad positions. Karjakin sealed victory with an effortless win over Boris Gelfand, with the pseudo-aggressive 20…Be4? already a losing mistake:

Whatever Karjakin had been doing in a Scottish castle with Denis Khismatullin, Yury Dokhoian and Alexander Riazantsev seems to be paying off, with Sergey in good form to mount a bid to play a rematch against Magnus Carlsen!

While gold and silver were decided before the final round, eight players entered it in contention for bronze, with the medal eventually going to Ian Nepomniachtchi, who inflicted yet more misery on last-placed Boris Gelfand. 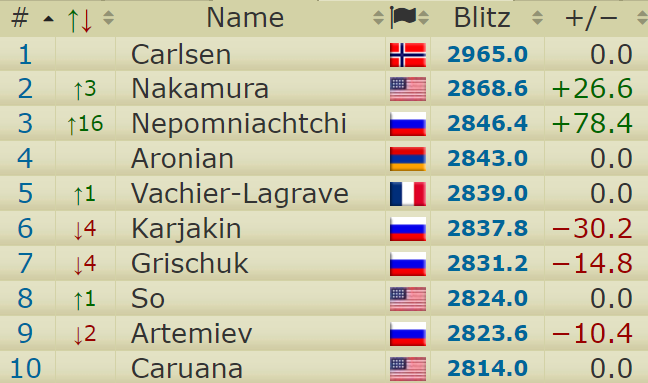 The blitz top 10 punishes Karjakin for a poor performance in the Aeroflot Blitz the day before the Tal Memorial began - Nepo won that event, with Nakamura sharing second | source: 2700chess

In second last place was Shakhriyar Mamedyarov, who had a spectacularly bad day. The Azeri star is famed for his attacking ability with the white pieces, but lost his first three games with White as his king kept getting stranded in the middle of the board. 20.Rb2?? against Dmitry Andreikin was just one calamity:

If Mamedyarov was trying to dampen the expectation surrounding his going into the Candidates Tournament as the rating favourite, he did a good job! 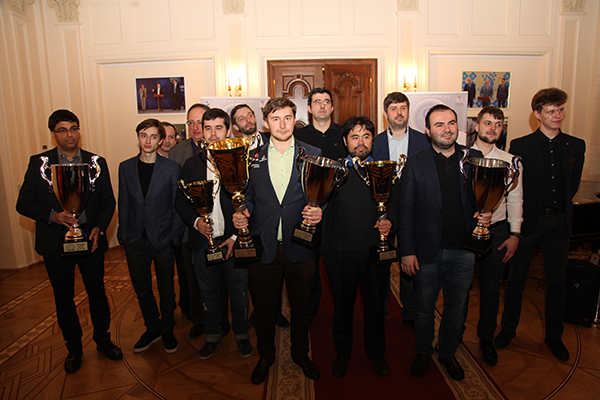 A group photo at the end with all the winners of both the rapid and blitz | photo: Vladimir Barsky, Russian Chess Federation

Everyone else in the tournament had at least something to cheer. Vladimir Fedoseev started the tournament with four losses and was at one stage losing in the fifth game against Vladislav Artemiev, but he won that and two wins in the last two rounds restored respectability on the scoretable.

Peter Svidler had a frustrating Tal Memorial overall, but got to enjoy one of the day’s best attacks in his game against Vladimir Fedoseev:

The final standings looked as follows (note you can also click on a result here to open the game):

There’s a lot of chess coming up in the next week, including the Reykjavik Open, the Spring Chess Classics in St. Louis, the HDBank Masters and the penultimate Bundesliga weekend, but of course the big one is the Candidates Tournament in Berlin. We’ll have full coverage here on chess24 from Saturday!