Svidler: “We would like to win it, if that’s ok”

The Russian men are once again the hot favourites, on paper, to win the 2014 Olympiad. It’s been twelve years, however, since they actually managed to claim gold medals, and this time round the form of a number of players seems poor going into the event. Jan Gustafsson talked to Peter Svidler about Russia’s chances, while we also take a quick look at the question marks over team selection and board order. 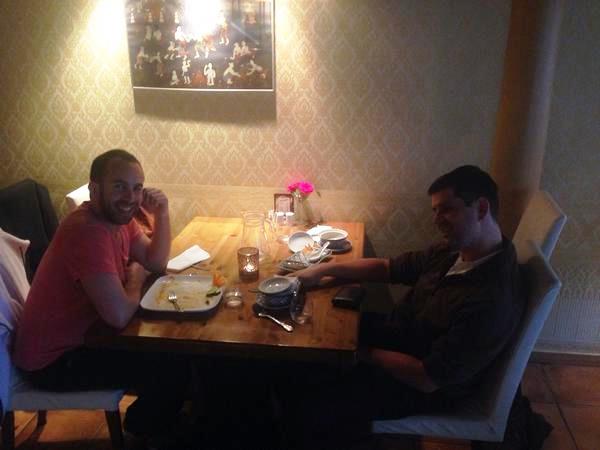 There’s been more speculation than usual about the line-up of the Russian team for a chess Olympiad. Alexander Grischuk, Sergey Karjakin, Vladimir Kramnik and Peter Svidler almost seemed to pick themselves (even if Peter was famously left out of the last Olympiad despite being the reigning Russian and World Cup Champion), but swapping the already-registered Dmitry Jakovenko (rated 5th in Russia) for Ian Nepomniachtchi (rated 9th after a poor ACP Golden Classic) raised some eyebrows. There’s also speculation about whether a clearly out-of-form Kramnik could drop from first board for the first time this millennium.

Jan valiantly tried to get chess24 video author Peter Svidler to spill the beans about the situation!

Jan Gustafsson: Peter, how do you like it in Tromsø so far?

Peter Svidler: It's been fine so far. It generally is, and then you start playing...

Of course expectations are huge for the Russian team, the clear no. 1 seeds. Do you guys feel like you are overdue for a win?

Is 'Why would you want to jinx a reasonably close friend?' an acceptable answer?

Ok, fair enough , let me rephrase :) What is the goal for Russia in this Olympiad?

We would like to win it, if that's ok.

Fair enough, and quite a team you’ve got! Kramnik, Grischuk, Karjakin, Svidler, Nepomniachtchi. There’s quite some speculation about the board order. Do you actually know it?

Your guess is as good as mine at this point. Well, actually it's not, but it's not 100% settled yet.

Were you surprised Nepomniachtchi was chosen for the team ahead of Jakovenko, Vitiugov and others that outrate him?

An embarrassment of riches has its drawbacks, of course. I'm not privy to the whys and wherefores of this choice - but it could not have been easy.

You are widely acclaimed as the best chess commentator out there. It’s a pity you might have to do some playing, but will you get a chance to stop by after a game or two and share your expertise on the broadcast?

How does it work for a powerhouse like Russia – do you have multiple trainers/seconds on site or at home who work for you at night and then feed you with opening secrets?

Three people here - Dokhoian, Motylev and Potkin. I'm sure most of us have friends at home we can ask, but the main support stuff is here.

Do the players exchange information amongst each other? Must be tricky when you’re competing in every other super-tournament...

It's pretty good in general – perhaps not sharing entire files, but the exchange of ideas is definitely quite open.

Nice... Can you describe what your typical day looks like at an Olympiad? (when playing a game)

I was fishing for those secret team meetings…

Beautiful. Thanks a lot, Peter, and let’s conclude with our usual question: what TV shows are you currently recommending/watching when you find time in your schedule?

Finished Fargo – enjoyed it a lot. The Honourable Woman, and a backlog of old stuff.

Thank you, Peter, and best of luck in the tournament!

Forgot the key interview question: did you get a chance to see Sharknado 2 yet?

Let’s briefly return to the situation surrounding the Russian team. Dmitry Jakovenko, who starred with five wins and four draws for Russia in the Istanbul 2012 Olympiad, made no secret of the fact he was disappointed to be left out of this year’s team, telling Evgeny Surov of Chess-News:

First of all, it didn’t come as a surprise for me now. The decision was taken at the start of July and announced by the head coach Dokhoian at our training camp (at the end of June and start of July we had training sessions near Moscow). After the tournament in Bergamo [the ACP Golden Classic where Nepomniachtchi finished last and lost 16 rating points] I had some hope that the decision would be reconsidered, because of course I wanted to play in the Olympiad. But the head coach decided not to change it. That’s his decision, and I can’t argue or evaluate it as it’s his field of expertise.

Yury Dokhoian perhaps believes that Nepomniachtchi has the greater potential and will provide more firepower (if less solidity) on the lower boards. Ian also starred for the Russian B team in the 2010 Olympiad in Khanty-Mansiysk.

The other big question is whether Vladimir Kramnik will still play on first board after finishing second last in both Norway Chess and Dortmund to remain in the Top 10 only by the smallest of margins – more games played in July than Leinier Dominguez. We’ll find out soon enough, as the deadline for submitting the “Fixed Board Order” is 19:00 tonight.

Meanwhile the Russian women’s team, after coming close to missing the whole event, will go into the Olympiad with new Russian citizen Kateryna Lagno on their side. They’re ranked second, slightly above Ukraine (strengthened by the return of Anna Muzychuk) but behind China. They seemed to enjoy their recent training camp:

How will the Russian teams do? Find out by following all the action live on the official site hosted by chess24!

Note that chess24 will also be heavily involved in providing the official news for the Olympiad, so please check out the Olympiad news page if things seem quiet around here.