This year’s Russian Team Championship in Sochi has two extra teams compared to a year ago, but there’s no hiding the gaping hole left by the missing “Siberian” all-stars Kramnik, Giri, Mamedyarov, Nepomniachtchi, Grischuk and Andreikin. Peter Svidler’s Bronze Horseman finished a disappointing 4th last year but are hot favourites to win this year, and they started with five wins and a draw. Meanwhile Kirsan Ilyumzhinov’s bid for FIDE President was given a boost by the Russian Chess Federation, though not without reservations.

In 2016 the main event of the Russian Team Championship had six teams, in 2017 it had eight, and this year there are 10, but the line-up of one team is enough to conclude that the event isn’t going smoothly from strength to strength. In 2017 the winners “Sibir” (Siberia) could boast six of the top eight players:

One year later the team has still entered the event, but 8th seed Denis Khismatullin is the only survivor and now their top-rated player. None of the Siberia players have found a place on another team.

That’s good news for Peter Svidler’s “Miedny Vsadnik” (Bronze Horseman) from St. Petersburg, who have exactly the same 2702 average rating in 2018 as in 2017, making them top seeds. On Board 2 is Nikita Vitiugov, who after the luxurious 5-star surroundings of the GRENKE Chess Classic tweeted:

The event in the “Pearl” Grand Hotel in the Russian Black Sea resort of Sochi is going well for the team so far, with the most crucial of five wins coming against their Moscow rivals Legacy Square Capital:

The balance of the match depended on the madness of Fedoseev-Najer:

At this stage Black was objectively winning (32…g4! is the computer’s recommendation), but Vladimir Fedoseev was able to bamboozle even as tactically gifted a player as Evgeniy Najer. The game swung in White’s favour on move 35, but was still too close to call until Najer went astray on move 39:

The St. Petersburg team’s one dropped point so far came when all games ended drawn in their match against Vladimir Potkin’s Molodezhka, a team that’s significantly lower-rated but currently in third place after only losing one match.

Peter Svidler had been a rock on top board with five draws, though that was costing him rating points until he beat Alexey Sarana in a crucial game in Round 6:

The 18-year-old had been under pressure for most of the game and his position has finally fallen apart. John Nunn’s LPDO (loose pieces drop off) dictates that Svidler’s move here was 40.Qh4!, hitting two undefended pieces, and Black resigned. That game cancelled out a shock loss with the white pieces for Maxim Matlakov against IM Ilia Iljiuhenok, a result that saw Maxim drop out of the 2700 club.

Apart from the loss to Svidler’s team, Daniil Dubov’s Legacy Square Capital have won their remaining matches to stay only one match point behind, while the shock of the event so far has been the disastrous showing of nominal second seeds Sima-Land, who have a mere two match points after four defeats and two draws. There have been losses for Boris Gelfand (1 loss), Evgeny Tomashevsky (2), Vladimir Malakhov (2), Alexander Riazantsev (1), Sergei Rublevsky (2) and Victor Bologan (2), with only former Russian Champion Igor Lysyj currently able to hold his head up high on an undefeated +2. 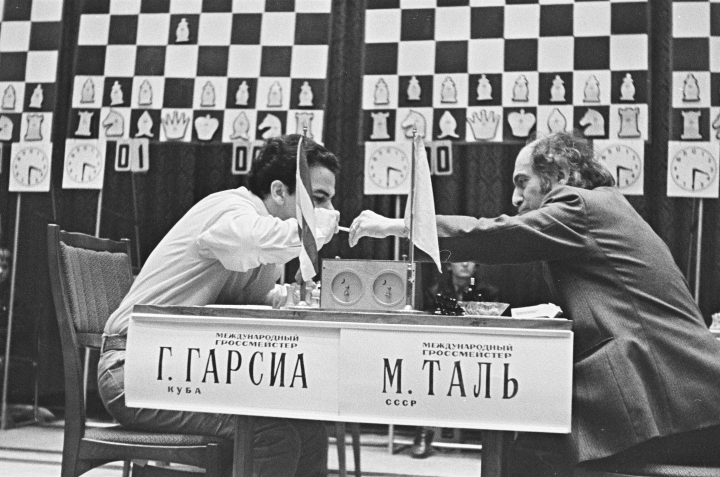 They're admiring a famous photo of Mikhail Tal giving Cuban GM Guillermo Garcia a light before their game in the 1982 Interzonal in Moscow | photo: Boris Dolmatovsky, ChessPro

The worst start for Sima-Land was made by Alexei Shirov, whose return to the Spanish Chess Federation began with three losses in a row:

Unfortunately all of them were in some way notable. Najer played a nice pawn sacrifice to get his knight to a perfect square:

At least in Round 6 Shirov was garnering attention for better reasons, with his 5.g4!? against Evgeny Alekseev's French raising eyebrows:

Curiously, though, this had been tried 13 times before, including by Alexander Grischuk, Zviad Izoria and Evgeniy Miroshnichenko, with Alexei Shirov himself playing it in the blitz tournament before the recent Chess Bundesliga final weekend. The game in Sochi ended in a draw.

The visit of Anatoly Karpov to support the team hadn’t entirely paid off...

Sima-Land still have the potential to alter the course of the tournament, though, since they play Bronze Horseman in the final round.

Meanwhile there’s no lack of star names in the women’s section, with the top teams Yugra and Legacy Square Capital again fighting for supremacy. In 2017 Yugra won the individual encounter 3:1 and went on to win the tournament, but this year it was top seeds Legacy Square Capital who won the match:

The teams are only level, though, after Alexandra Kosteniuk’s team suffered a shock 3:1 defeat in Round 5 to a team led by Anastasia Bodnaruk. They came back from that nicely with a 3.5:0.5 win in Round 6, with a beautiful 116th (!) move for Alexandra:

That’s not quite all the news from Sochi, though. Kirsan Ilyumzhinov’s bid to extend his already 23-year term as FIDE President was given a boost when the Russian Chess Federation board voted to support Ilyumzhinov with 11 for, 0 against and 8 abstentions.

It wasn’t exactly a ringing endorsement, though, with Kirsan forced to confirm such an “odious” figure as Silvio Danailov (the most vocal supporter of Ilyumzhinov on social media) wouldn’t be part of his team, while Russian Chess Federation President Andrey Filatov told the TASS News Agency:

Since he’s actively travelling the world and doing promotion we decided to support him, as otherwise it would be tough for him to keep operating. At the same time, if the ticket changes we may stop supporting him. And in general, the moment the Russian Federation government is formed we’ll hold consultations with the Russian Ministry of Foreign Affairs, since some people on the ticket raise concerns.

No doubt a certain US citizen “Glen Stark”, Ilyumzhinov’s candidate for FIDE General Secretary, is among those concerns, since at best his online CV and website are bizarre and likely in part plagiarized, while at worst he’s simply a figment of someone’s imagination.

Nevertheless, if Russia does support Ilyumzhinov it may still be highly significant, since in previous elections Russian embassies around the world have lobbied for his candidacy. The connection between chess and politics is currently strong in Russia, with Sergey Karjakin proudly boasting of his presence at Vladimir Putin’s inauguration yesterday:

The opposition to Ilyumzhinov consists of Georgios Makropoulos, the Deputy FIDE President and acting President, who seems to have gathered together most of Ilyumzhinov’s erstwhile allies, and the outspoken and sometimes controversial former World Championship Challenger Nigel Short, who just threw his hat into the ring as an alternative to the status quo:

Chess politics fans can expect an eventful summer before the election in October 2018.