Svidler: It's simpler to be Black against Magnus

One game in Round 7 of No Logo Norway Chess finished literally hours before the others. Luckily for the waiting TV crews, however, it involved star commentator Peter Svidler, who was happy to talk about his encounter with Simen Agdestein, the Norwegian’s incredible tournament success, why it’s easier to play Magnus Carlsen with Black and more. 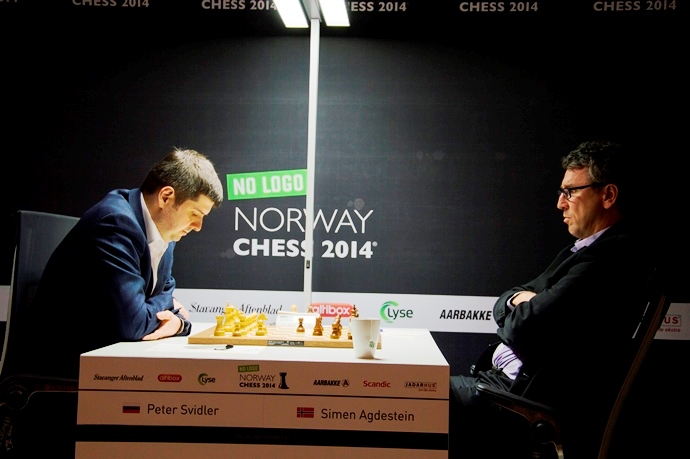 Svidler - Agdestein was the only game of Round 6 to end in under 5.5 hours | photo: official website

Svidler’s game against Agdestein saw the Russian Champion live at least somewhat dangerously by giving up both the centre and the right to castle. It ended in a draw by repetition, with the final position alone giving an idea of how curious an encounter it was:

Peter later explained in the press conference why he’d gone for this opening rather than a more mainstream approach:

Svidler: Today was not a very pleasant day because I started at about 11pm last night thinking it will be a reasonably early night, I’ll click a little bit and I’ll figure out what’s wrong with this French… By about 3am I realised I really, really need to start sleeping at some point and it’s a draw.

Svidler: I rechecked it this morning and came to the same conclusion and basically I settled on just doing something like this and hoping to get a game. I did get a game, but not a game I particularly liked.

Peter later appeared for a 5-minute interview in the studio of the Norwegian internet TV channel VGTV, where he started first talking about the game before the conversation became more wide-ranging:

Were you near losing?


Svidler: Near losing is an overstatement, but I didn’t like my position at all.

Are you surprised by Agdestein’s play?

Because we’re talking about him as an outsider at the tournament.

By Round 7 I don’t think anyone has any illusions anymore. He’s playing fantastic chess. If he converted all his good positions into victories he’d have been the outright leader of the tournament. What he lacks is this final touch, maybe, but he’s been playing maybe the most interesting chess of all the participants. I’m not disappointed because I drew against Simen, I’m disappointed with the way I played. It’s not the result. I would like to play a little bit better. The result I’m fine with. 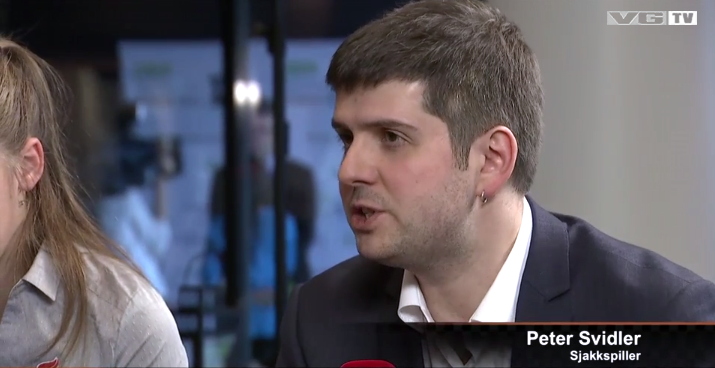 Peter Svidler in the VGTV studio

Anyone can win this.

It’s a strange situation where the whole tournament is so closely bunched up that a run of good results can actually propel almost anyone to the top. It’s unusual. It doesn’t really happen in many events. We’ll see how the finish goes.

Who do you think will win?

I quite like Magnus’ position today, and if he does win this he’ll be on +2 and I think then he’ll become a favourite to win the whole thing, but winning isn’t a foregone conclusion yet, obviously. Of course he has a lot of pressure and he’s very good in positions like this but there will still be some technical problems.

What do you think about your own position in the tournament?

I’ll play Magnus the day after tomorrow in Round 8 and that will probably be my final chance to do something in this tournament. But he doesn’t lose very many games, so…

What do you think about that game?

It will be hugely important. I’d very much like to do something good in this tournament. It’s been very disappointing in terms of my own play. Once again, it’s not really the result – 6 draws and 1 loss is not ideal – but it’s more just the missed opportunities and the quality of my own play I’m concerned about.

White against Magnus? What do you think about that?

In a way – although looking at the position right now against my favourite opening maybe I shouldn’t be wishing to be Black against him –  but in a way it’s simpler to be Black against him because his black repertoire is so solid that nobody seems to be completely sure what to do. As Karjakin showed a couple of days ago – and Karjakin is one of the better prepared players in the world today –  Magnus started thinking around move 37, and he was mainly thinking about where to go for dinner. So it’s difficult.

Do you know what you’re going to do?

When do you know that?

I’m hoping to know by the time I get to the board. 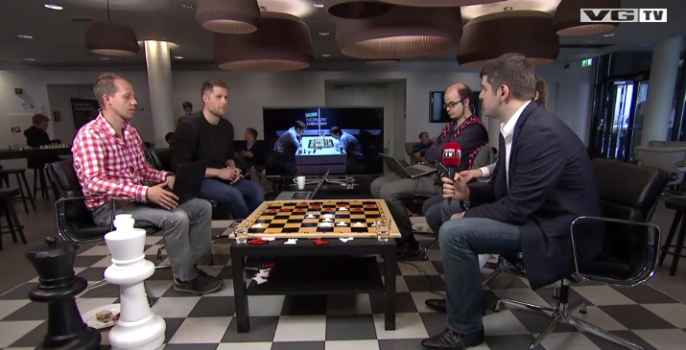 A somewhat more impressive media presence than we're used to at chess tournaments!

You haven’t won a game in the tournament yet, but I’m sure you’ve won all the press conferences.

I’m not sure. People have been doing very well on this front as well. I think I’m not crushing this tournament in any respect. Normally I can at least count on winning this segment, but from what I heard some people were doing extremely well in press conferences. I’m not impressed with my own performance almost in any way, shape or form here.

I’m doing ok, but I think the field has caught up a little bit. People realise that they need to work on this area of their game. They’ve come here prepared. I’m facing some very stern competition.

Do you have anything to say about the tournament? You’re playing for the 2nd year in a row.

It’s a very nice tournament to play in. It’s extremely strong and extremely difficult, but I’ve always liked playing in tournaments of this magnitude. Once again, maybe it’s not obvious from my play, but I generally enjoy playing against the best of the best. It motivates me – it makes me much more interested in what’s going on. I was very, very happy to get an invitation. My only problem is that I’d like to do better than I’m doing currently, but the tournament is fantastic.

Thank you very much.