Svidler: "Chess is a virus of sorts"

In Part 2 of our video interview Russian star Peter Svidler talks to Rustam Kasimdzhanov about the influence chess has had on his life. He describes both the joy this "incredibly beautiful game" can bring and the potential dangers of trying to treat life like a game of chess. We bring you a full transcript and, as an added bonus, a blitz game (complete with mild trash-talking!) between Peter and Rustam.

If you're yet to see it you can find Part 1 of this interview here.

Rustam Kasimdzhanov: How useful has chess been to you otherwise in your life?

I know of at least one point in my life – thankfully it was years ago and I’ve tried to stay away from this since – where I thought:  ok, so this is the position, these are the candidate moves (according to Kotov you have to create a tree and count the branches and everything), this is the most likely correct continuation from here, which will lead to this, this and this and the position in, let’s say two years’ time, will look like that.

In general chess is a virus of sorts – you keep on thinking about it. When your mind is idle some position will pop up and you’ll start thinking about it and it won’t go away until you’ve come to some sort of conclusion. But I’m doing something I still love doing and chess has been good to me, I have no doubt about that. It does make you perhaps somewhat more rational than people should be.

We spoke of whether chess was useful to you in life. How useful would chess be to people who don’t play it professionally?

Chess teaches you a lot of things. Apart from the most obvious – spatial imagination and the ability to concentrate for reasonably long periods of time – if we’re talking about kids I think that the ability to handle disappointment and loss is important for character-forming. You’ll go through some of that if you get involved with chess and I think it makes you a better, more rounded person in general. 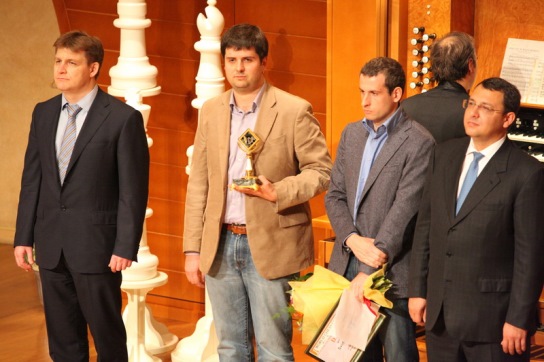 I think it’s an incredibly beautiful game. It can bring you a lot of joy if you study it and begin to understand it. You do need to put in some work because the “problem” with chess is that you do need to get past a certain level to begin appreciating just how beautiful it can be. Showing some incredible study to a person who barely knows how the pieces move will be a bit of a fail, but once you do get across that barrier I think it’s a remarkably beautiful game.

It has a somewhat mystical quality for me. In its best aspects it’s like music or literature. It can create a feeling of wonder and beauty – obviously not every day, but it can. That’s the reason I’m still happy I’m playing it because every now and then you create something which makes you think, yeah, that really was something which will remain. It’s more than a game – at least I like to think so.

Could we say chess gives you magical moments?

It definitely does. That’s what I’m looking for more than anything. Success and recognition and all those things are important, clearly – who doesn’t want those? – but this feeling that you get every now and then that you’re completely in control of what you’re doing over the board and the pieces listen to you and do what you say… For me that’s absolutely fantastic and what I’m searching for – what I’m playing for.

They couldn’t drag me away! It was a bit strange, I guess. As a father of two we weren’t as lucky, because my kids do have some interests but none is as completely dominant as chess was with me. It’s much easier to be a parent of a child who from a very early age knows exactly what he wants from life. For me I came back from school and I would put my textbooks down and just sit on the floor and start reading a chess book. Lunch would somehow intervene but after a number of reminders that I need to go and eat at some point. Generally speaking, I was doing stuff that was expected from me and then my entire free time was occupied by reading about chess, playing chess and thinking about chess.

I remember once reading an interview where Vishy Anand was asked whether chess had made him happy. I was quite impressed by the clarity of his answer because for me it’s always something of a love/hate relationship, but for Vishy Anand the question and the answer were both very clear. He said, “yes, immensely”. Would your answer be similar?

I think so. I honestly… the reason I’m thinking now is that I’m trying to understand why the answer would be anything but yes! Yes, the game is hard and I haven’t perhaps been as successful as some people say I should have been, but generally speaking, chess has been incredibly good to me and I still love it very much even after almost 30 years of doing it non-stop. So yes, chess definitely made me happy.

After the main part of the interview was over Peter also talked briefly to Rustam about the chess24 project and then - as befits chess players currently rated 2758 and 2693 - the interrogation switched to the chessboard!

That's not all from Peter Svidler! Next week battle commences in the Candidates Tournament for the right to play a World Championship match against Magnus Carlsen. Svidler is one of the eight contenders and we'll soon be publishing his thoughts on the challenge ahead.