2013 World Blitz Champion Le Quang Liem was second last after the rapid section of the Superbet Rapid and Blitz but went on to score a brilliant 7/9 on the first day of blitz to climb into sole third place. The day’s second top scorer was Levon Aronian, whose unbeaten +2 put pressure on the leader, but going into the final day it’s still wild card Anton Korobov who leads by a point. “I am full of power!” said the Ukrainian grandmaster when asked about his energy levels. 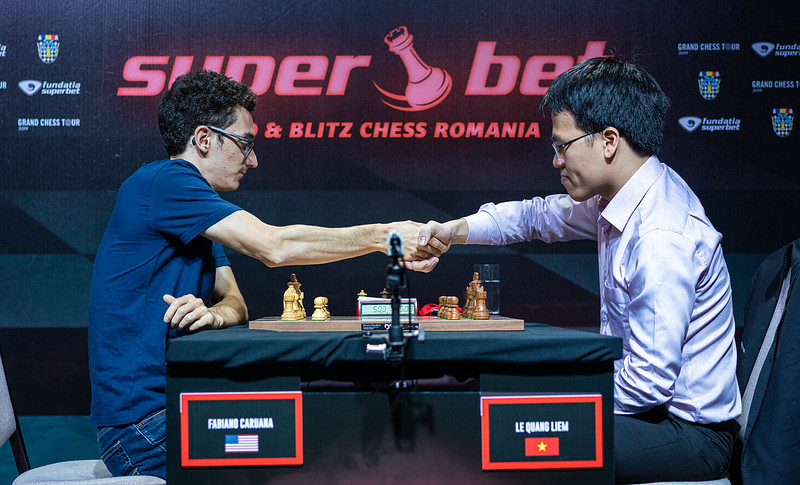 Fabiano Caruana was one of the few players to emerge from an encounter with Le Quang Liem unscathed | photo: Lennart Ootes, Grand Chess Tour

You can replay all the Superbet Rapid & Blitz Grand Chess Tour games using the selector below:

And here’s the day’s live commentary, including interviews with Le Quang Liem, Levon Aronian and Anton Korobov at the end:

It took 28-year-old Vietnamese, US-based Grandmaster Le Quang Liem 9 games until he scored his first win in Bucharest, but on the first day of blitz he was in a different class: 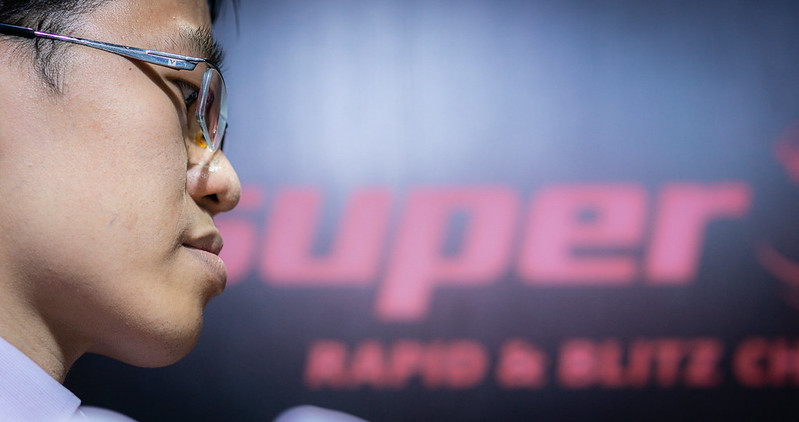 His five wins and four draws began with inflicting the first loss on Anton Korobov, a result that would grow in significance as the day wore on. It was a game that summed up how he later described his approach:

I feel like I should have done better in the rapid so I felt that in the blitz I should just relax a bit and try to play practical chess.

It was certainly that, with sharp calculation and fine technique combined with excellent time management. He threatened to catch the leader with a 4-game winning streak that began with smooth victories over Vishy Anand and Vladislav Artemiev before Wesley So cracked in a tricky ending:

The 4th win in a row was the highlight of Le Quang Liem’s day, as he launched an unstoppable attack against Anish Giri’s Sicilian:

It ended on move 33, when White found the most clinical finish:

No-one’s perfect, of course, and in the final two games Le Quang Liem admitted he’d been close to defeat. The clearest chance was for Fabiano Caruana: 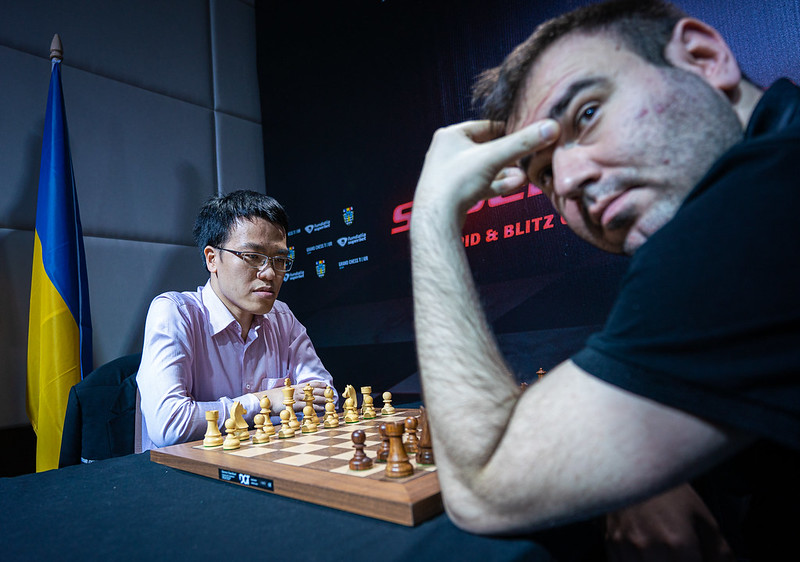 You couldn’t argue with Le Quang Liem’s summary of the day:

In general I feel like I did the best I could and obviously I couldn’t ask for more!

Armenian no. 1 Levon Aronian came into the Superbet Rapid & Blitz ranked 4th in the overall points table for the Grand Chess Tour, but with the luxury of knowing that he still has another event in India to play. If he scored any kind of decent result in Bucharest he’d be a huge favourite to qualify for the Final Four in London in December, so he hasn’t had to go out and try and blow away the opposition. That’s reflected in his score so far: 4 wins, 13 draws and just 1 loss, in rapid chess. 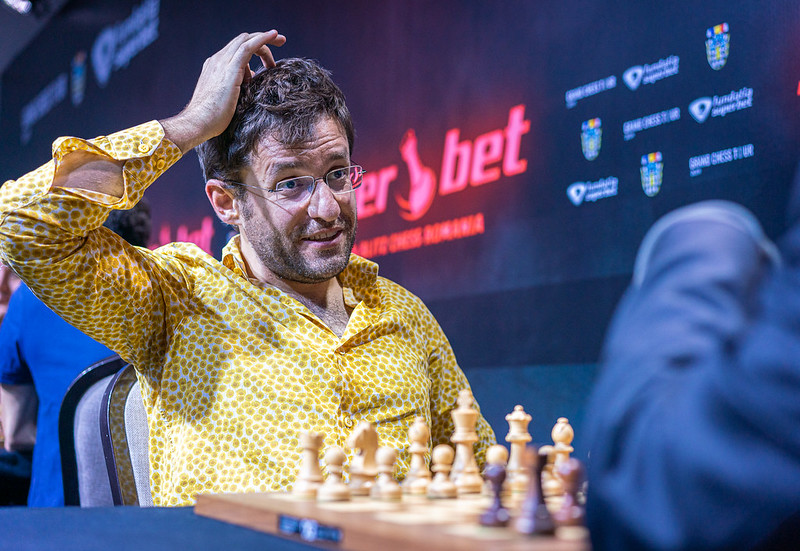 It can't be ruled out that Levon's opponents were always ready to accept a draw offer to escape from his shirt | photo: Lennart Ootes, Grand Chess Tour

He’d quipped the previous day, “I think if I continue getting presents I’ll qualify!”, and you could say that’s what happened, since the two wins in blitz involved a lot of help from Vladislav Artemiev and Wesley So. Perhaps the most memorable single moment came in the final round against Fabiano Caruana, when Levon explained his reasoning for taking a draw rather than playing on in a better position:

This is the old Soviet thing - when you blunder something in one move then there is something wrong with you. Just finish the game in a draw! I played 36.Qa6? and then I saw immediately 36…Nc7! and I can go home, I’m losing a knight.

This is the position after 36.Qa6?

36…Nc7! would attack both the queen and the knight on e5. Instead after 36…Qf6 by Caruana a draw followed a few moves later. 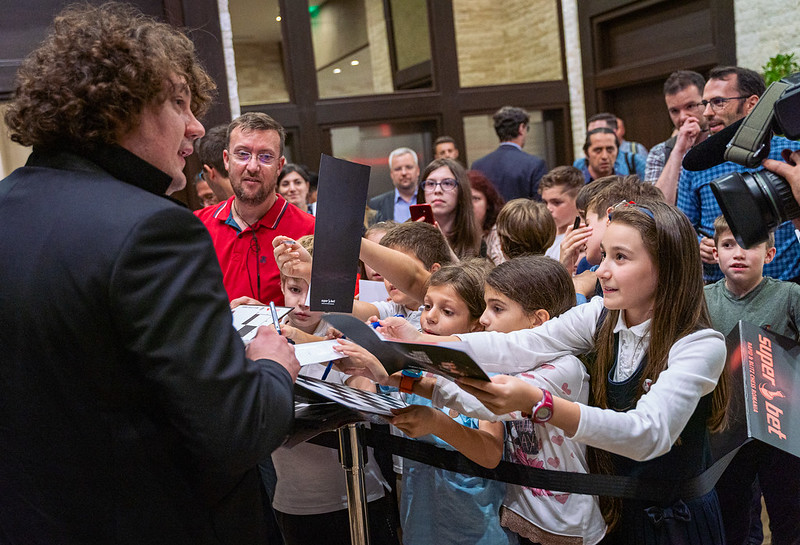 The first day of blitz was a good example of just how important it is to score well in the rapid section of the Grand Chess Tour events. Wesley So started the blitz in last place and despite a good start and outscoring many of the players above him he could never climb out of that hole. Anton Korobov got off to what he described as a “disastrous” start, but he would never lose the sole lead all day.

That start saw him lose the game we've mentioned to Le Quang Liem in Round 1, and then he was beaten by Vishy Anand in Round 3 in what was perhaps the day’s most insane game:

You couldn’t really argue with the outcome, but Anton could also easily have won, most clearly after 58…Nf4?

It was looking as though it might not be Korobov’s day as in the next game against Vladislav Artemiev he let slip a position where the computer was giving him a -26 advantage with Black:

The answer was 53…Rd8!, with the difference that after 53…Re8? 54.Raa7! in the game Black can’t push 54…d2 without allowing an immediately draw by perpetual check with 55.Rg7+ and so on. If Black had played 53…Rd8 the king would be able to escape the checks on the e8-square.

Korobov had soon gone 9 games without a win and was about to be caught, but just in time he won on demand against Fabiano Caruana in the 7th round of blitz. Afterwards he commented:

Today I was preparing - yesterday I was ashamed of not knowing there is a game played in the World Championship, so today I was preparing by the book written by Taimanov, the opening book devoted to the Nimzo Defence. The book was written in 1861 [1961!]… and today I played against Vishy this line, against Fabiano and against Sergey. So I scored 1.5/3. I think it’s ok! The future looks very promising.

Anton played the white side, and it was certainly a lot of fun. We’ve already seen what happened in that crazy game against Vishy, and the Fabiano game was more of the same, with Korobov swinging from winning, to dead lost, to crashing through for victory:

He carried that “momentum” into the next game against Mamedyarov, though again it was wild! On move 36 Shakh, playing White, was completely winning, but…

…the only path to victory was now 33.Rxg4! The attempt to simplify with 33.Qg6? left White dead lost after 33…Qh1+!, and with the white queen AWOL it turns out there’s no way to stop the mating threats against the white king. 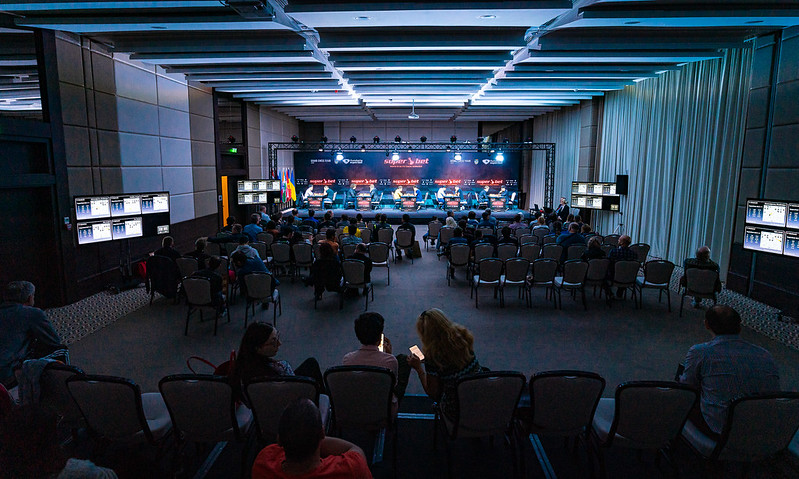 That could, of course, all change very quickly, especially since the first round of the final day sees Le Quang Liem playing White against Korobov! Tune into all the action here on chess24 from 14:00 CET!