Anton Korobov finished the rapid section of the Superbet Rapid & Blitz a full two points ahead of Anish Giri, Levon Aronian and Shakhriyar Mamedyarov and, despite remaining unbeaten, explained that, “the task for the blitz section is not to lose 18 games in a row!” The blitz will be too close to call, with sleeping giants Sergey Karjakin and Shakhriyar Mamedyarov waking up on the last day of rapid to claim two wins apiece, while Le Quang Liem’s first win came in the 9th round against Vishy Anand. 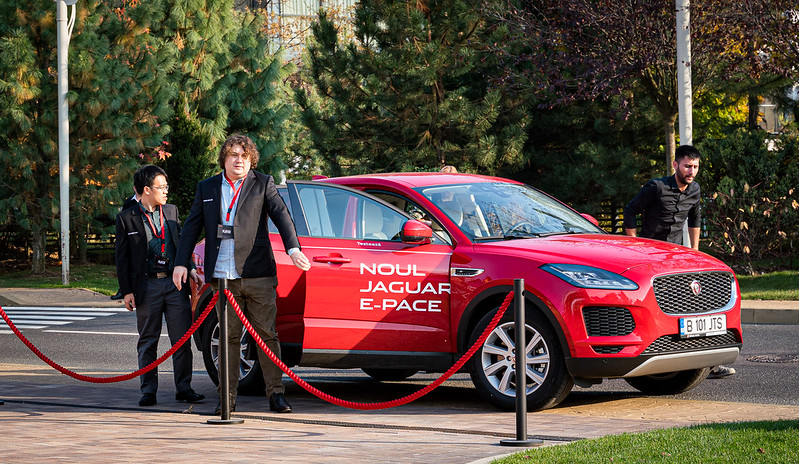 You can replay all the games from Bucharest using the selector below:

And here’s the day’s live commentary, including interviews with some of the players:

When Anton Korobov was asked about his expectations going into the Superbet Rapid & Blitz as a wild card he commented:

It’s an opportunity for me to reconcile ambitions and reality, to see my real price at the brides market!

The price is pretty high right now, and during the rapid section in Bucharest he not only justified his stellar rating but climbed above Wesley So and Hikaru Nakamura to the no. 4 spot on the rapid live rating list. At 2812.2 rating he currently has only MVL, Magnus Carlsen and Ding Liren above him. He’s also the only unbeaten player in the event (please ignore the classical rating and rating change here): 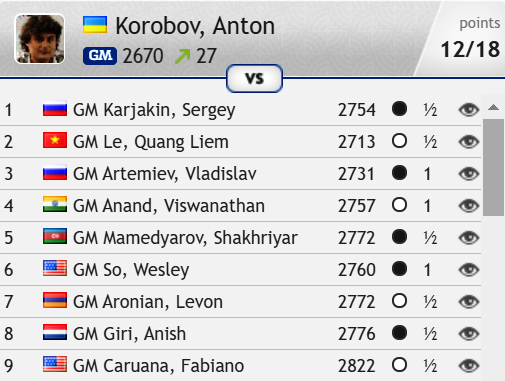 As you can see, the final day of rapid wasn’t quite as successful for the Ukrainian grandmaster, but three draws was an excellent outcome given some of the positions he’d had. The Round 8 clash with Anish Giri could have altered the course of the tournament, since the Dutchman, despite a few rocky rounds, would have caught Korobov with a win. That looked almost inevitable when Anish found himself three pawns up:

After three minutes Anish here went for the passive 24.Rg1?!, and with the rook out of the game Anton managed to create enough counterplay with 24…Bd1! to draw. Instead 24.Rf4! would have allowed White to combine defence and attack, with 24…Bd1 now met by 24.Rc4. Giri had clearly realised his mistake by the end:

In the final game Korobov faced a Fabiano Caruana who had lost three games in a row. That streak might have grown, as Anton gained a grip on the position and gave some more memorable analysis, this time of his 25.h5:


Trying to eat up some space – that is the strategy of AlphaZero, you are eating space, space and you have to eat all 64 squares in order to win. I’m controlling pretty much… I have control over probably 40 squares now, so I need 24 more! 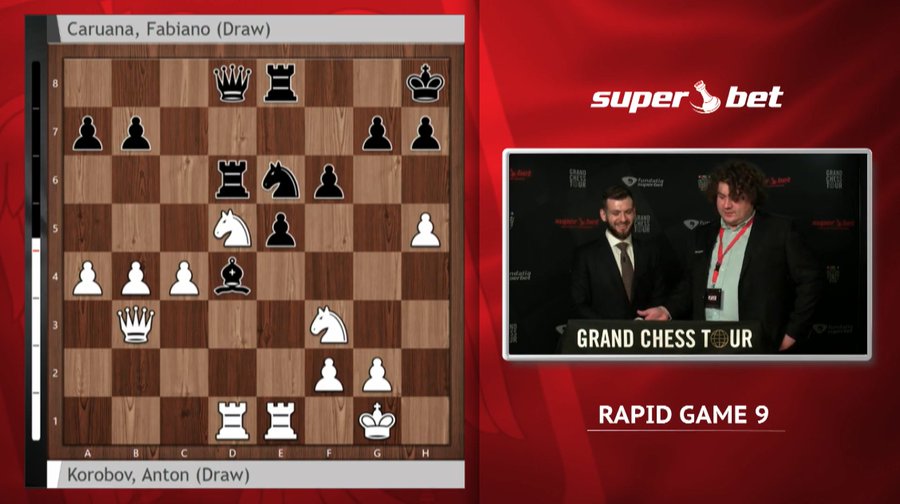 For a while that project was going well, but then Anton admitted he was “trying to play for a win, but the situation was out of control”. Fabiano had chances of his own, but the last chance fell to Korobov: 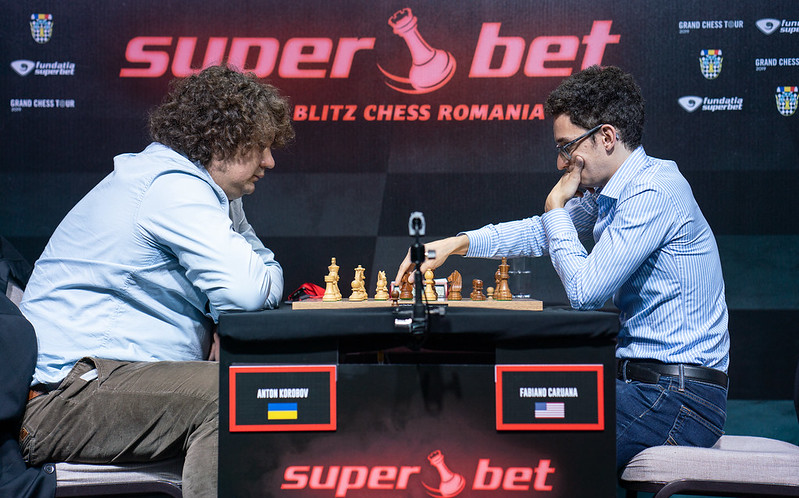 Three players scored their first wins on the final day of rapid. Shakhriyar Mamedyarov had seemed to be going through the motions – after 7 draws in the European Team Championship in Batumi he had 6 draws and 1 loss in Bucharest. In the first round of the day, however, he got an advantage out of the opening against Giri and never looked back. 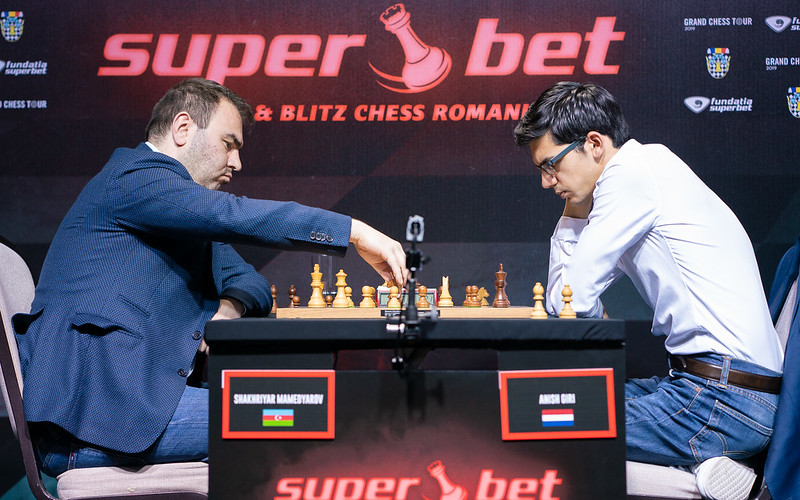 That it was going to be his day became clear in the next game when despite spoiling an advantage against Fabiano Caruana he was gifted a second chance by the unfortunate 50.Ne5?

Shakh gratefully took the chance to play 50…Qxe5+! and Fabiano resigned since he was just losing a piece to 51.Qxe5 Nf3+.

Sergey Karjakin was also winless and had lost two games to Giri and Caruana, but he bounced back on the final day of rapid after Vladislav Artemiev blundered against him in the first game and he then ground out a win in a drawish queen ending against Vishy Anand. Mamedyarov and Karjakin could be sure their good work wouldn’t be spoilt in the final round since they were playing each other, with no-one surprised they were the first to finish and had made a draw. 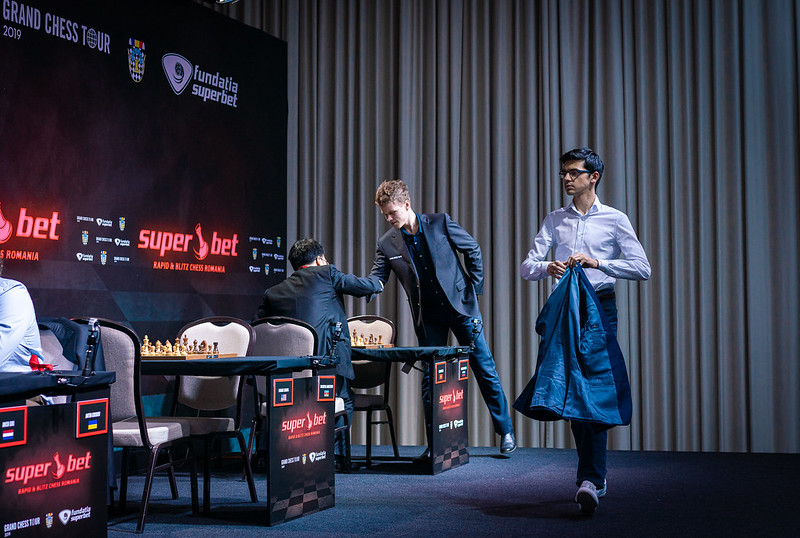 Le Quang Liem was the other player to finally grab a win. It could have come sooner, since he was beating Wesley So in the first game of the day:

The Vietnamese star’s 46.Bd8? was a very strong idea, with one of the huge threats being 47.Qc8+ Ka7 48.Bb6+!, winning the queen on h8. It didn’t work here, though, since Wesley’s last move had prepared 46…Qxh3! and although White established a mating net with 47.Qc8+ Ka7 48.a5 Black survived with 48.Qb3+ and perpetual check. It turns out, therefore, that White had to play the brilliant 46.h4!! first, physically preventing the Qxh3-b3+ idea. 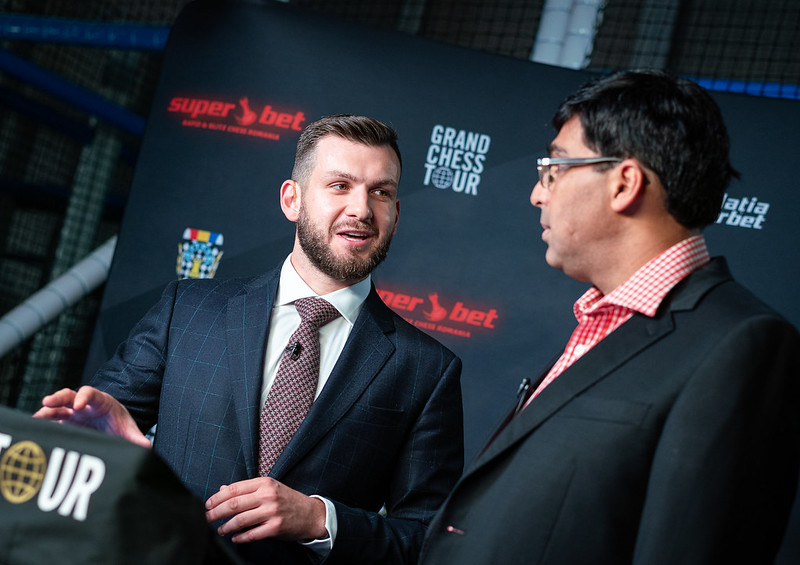 There was almost as big a miss against Vishy Anand in the final game, but after 47.d5 it was time for Le Quang Liem to seal the deal:

It wasn’t all losses for Vishy, however, since in what looked set to be a long ending he spotted an essential detail in the position after Caruana played 30…a5:

We should also show Levon Aronian’s demolition of Wesley So here, but it would be false to pretend than any beautiful chess could redeem the lasting impression made by the Armenian no. 1’s suit! 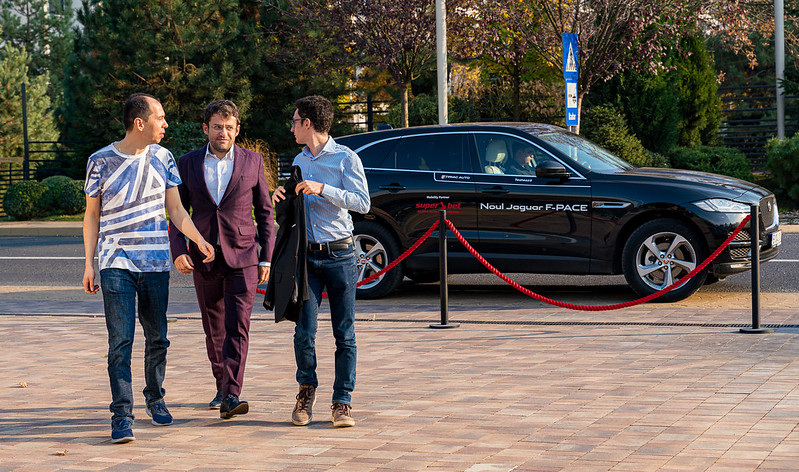 When your friends tell you "sure, no-one will think you look weird"... | photo: Lennart Ootes, Grand Chess Tour

That leaves the standings going into the 18 rounds of blitz on the weekend as follows:

As you can see, it’s perhaps only Wesley So who looks truly out of contention for overall victory. It’s going to be intense, and you can watch all the action here on chess24 from 14:00 CET!