Anish Giri found some stunning moves to beat Wesley So and Sergey Karjakin and drew a thriller against Fabiano Caruana as he took the sole lead on 5/6 after Day 1 of the Superbet Rapid & Blitz in Bucharest. Afterwards, talking about online clichés, he commented, “Either you’re the biggest sissycat out there or you’re Mikhail Tal!” Vishy Anand also got off to a brilliant start and was close to joining Anish before he let Shakhriyar Mamedyarov escape with a draw in the final game. 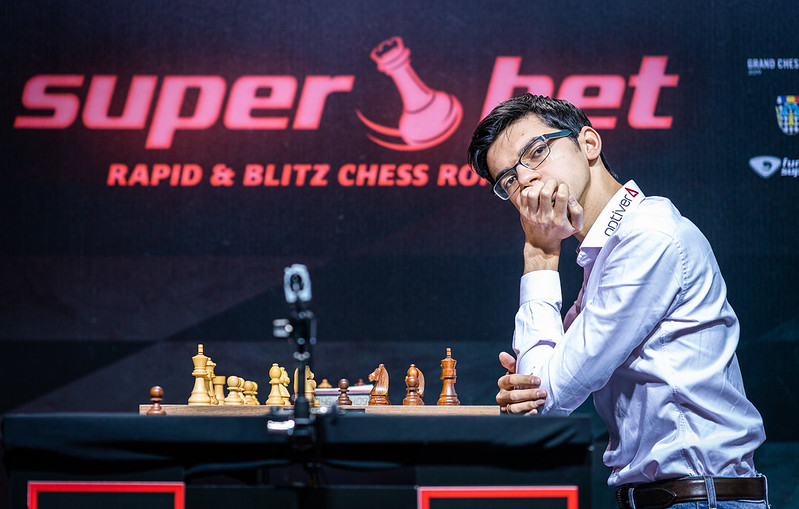 You can replay all the games from the Superbet Rapid & Blitz using the selector below:

And here’s the day’s live commentary, including interviews with many of the players:

Wesley So came to Bucharest as a newly-crowned World Champion, albeit in Fischer Random Chess, and a player unbeaten in 13 games against Ian Nepomniachtchi and Magnus Carlsen. His first game against Anish Giri sped to a quiet ending where Wesley had recently achieved an easy draw against Sanan Sjugirov on the Isle of Man, and it seemed the players were just going to get off to a steady start. 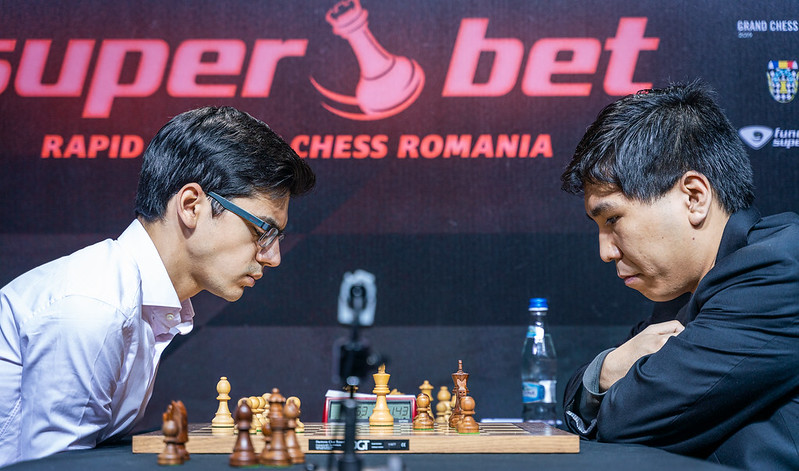 All it took, however, was one new move and one unwise exchange and suddenly Giri was scenting blood! His bishop and king dominated Wesley’s knight, and after 38…h6 we got to witness an exquisite move:

The immediate 39.gxh6 of course runs into 39...Nxf6. White might well still win eventually if he moves his bishop to a square like e7 or c3, but after Black plays hxg5 or h5 there's still a fight ahead. Instead Giri finished things off with 39.Bd8+!! and Wesley resigned. After 39…Kxd8 40.gxh6 the black knight can’t both stop the h-pawn and protect b6, so White will queen a pawn and win the game.

All the games were drawn in Round 2, but things could have been very different. Giri-Caruana was a 68-move rollercoaster…

…while Sergey Karjakin, who had already missed chances against Anton Korobov in Round 1, really should have put Levon Aronian to the sword:

The completely forced 17…Bxc4! 18.bxc4 Rxe4! simply wins a key central pawn, but after half a minute Sergey went for 17…Bb4 instead. 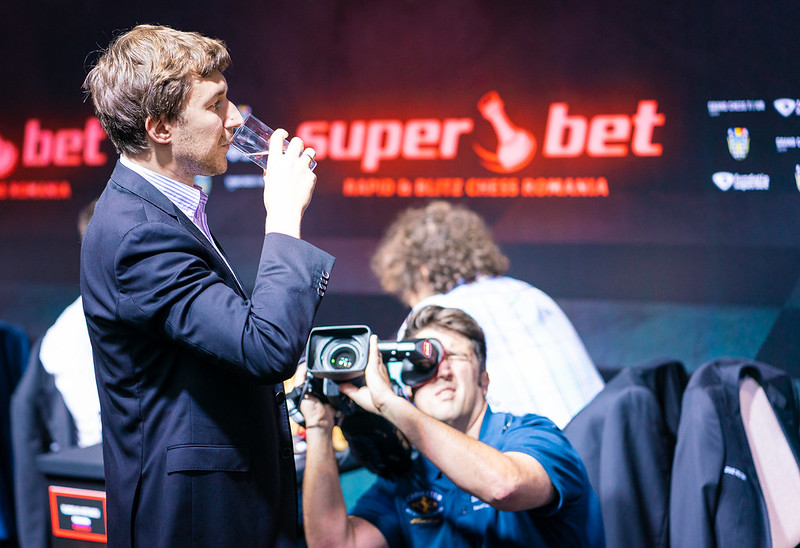 In the day’s final round Giri and Karjakin met, with Anish playing the Najdorf and later paraphrasing Al Pacino:

Just when I’m about to quit the Najdorf they always pull me back in with games like that!

He pointed out that 14.g3!? was the start of Sergey’s troubles:

He explained that White’s plan is the thematic Ng2, Ne3, but that it simply doesn’t work due to the equally thematic Bd8-a5. Giri could have played that immediately, but he decided to gamble that his opponent wouldn’t spot the danger and play 14…0-0 first, since after 15.Ng2 (15.Qd3! was best) it was now even stronger to play 15…Bd8! 16.Qd3 Ba5! and Black was already significantly on top. Things went like clockwork after that until Sergey resigned on move 38.

That meant Giri reached 5/6 (there are two points for a win in the rapid games), where he could have been joined by Vishy Anand if the 5-time World Champion had managed to convert a much better position against Shakhriyar Mamedyarov in Round 3. 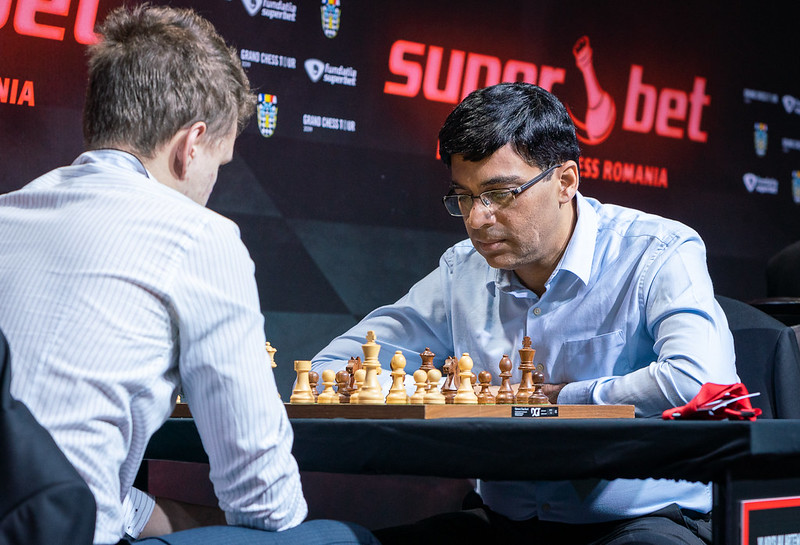 Vladislav Artemiev is a fantastic rapid and blitz player, but he didn't manage to show it on Day 1 - partly because he found Vishy Anand in top form | photo: Lennart Ootes, Grand Chess Tour

It was still a good day for Vishy, however, after he allowed Grand Chess Tour debutant Vladislav Artemiev (with White) to win an exchange in the first game:

16.Nxf6+!? Bxf6 17.Bxc6 Bxg5 18.Bxe8 Qxe8 and it turned out Vishy’s bishop pair and central pawns were fantastic compensation for the exchange. By the time 32…Bd6! appeared on the board everything that could have gone wrong had gone wrong for Artemiev:

He resigned a few moves later:

Vishy is joined in 2nd place by Levon Aronian, who won a crazy first game against Caruana, and wild card Anton Korobov, who rode his luck to get two draws and then beat Artemiev in the 3rd round. 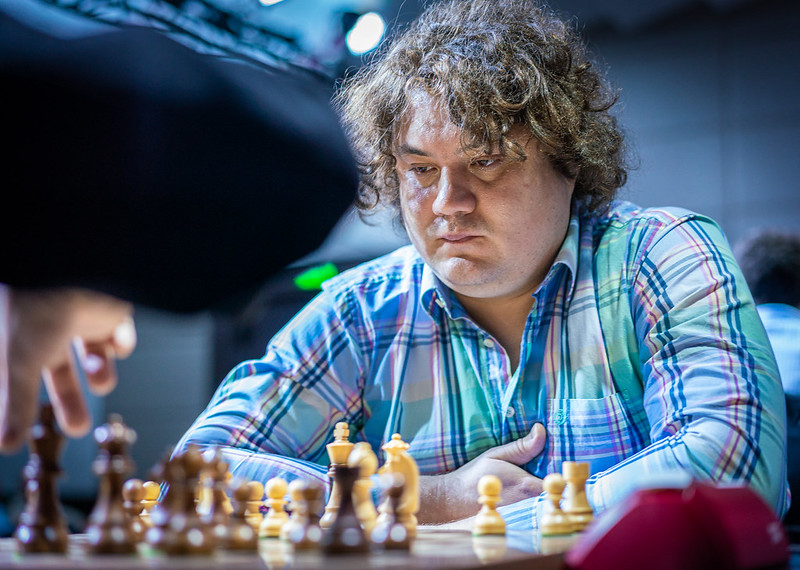 You should mentally be ready... Mental strength, commitment and physical power!

He may know a thing or two about that, since after Day 1 he happens to be the highest rated player in the field in rapid chess – 2804.6 and world no. 5 on the live rating list. When Cristian Chirila asked how he felt about that, Anton responded:

Here are the standings after Day 1:

Don't miss live commentary in English, Spanish and Russian here on chess24 from 14:00 CET each day! 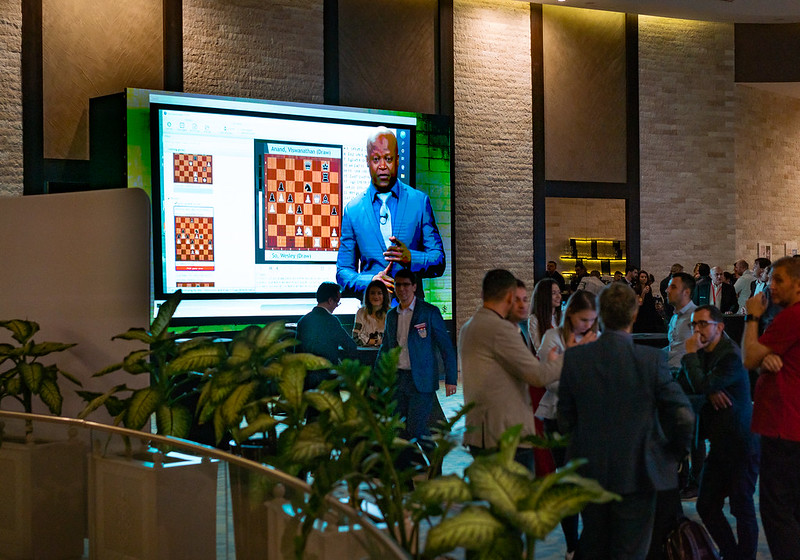 Maurice Ashley isn't in Romania, but it feels as though he is! | photo: Lennart Ootes, Grand Chess Tour

There's also an accompanying event for Romanian players taking place in the same venue with exactly the same format and a 15,000 EUR prize fund. GM Constantin Lupulescu is currently leading the SuperChess Cup Rapid & Blitz with a perfect 6/6, and you can play through all the games here.