Alireza Firouzja is back in the hunt for the Superbet Chess Classic title after winning a thrilling game against Leinier Dominguez. Shakhriyar Mamedyarov also grabbed his 1st win of the event, but only after Ian Nepomniachtchi missed a clear win of his own. The biggest blunder of the day was made by Richard Rapport, who helped Maxime Vachier-Lagrave bounce back from his own troubles the day before. Wesley So and Levon Aronian both drew and still lead with two rounds to go. 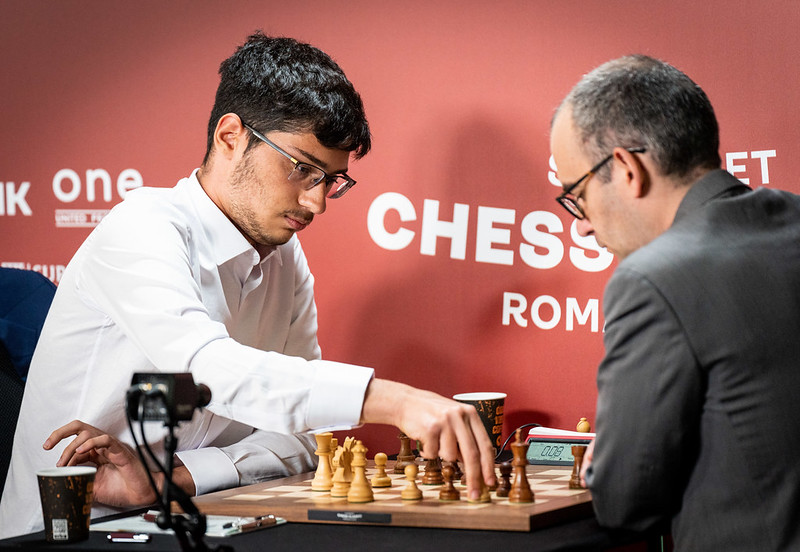 Wesley So and Levon Aronian went into Round 7 of the Superbet Chess Classic with a one-point lead over the chasing pack, and it was clear neither player was in the mood to take any risks. 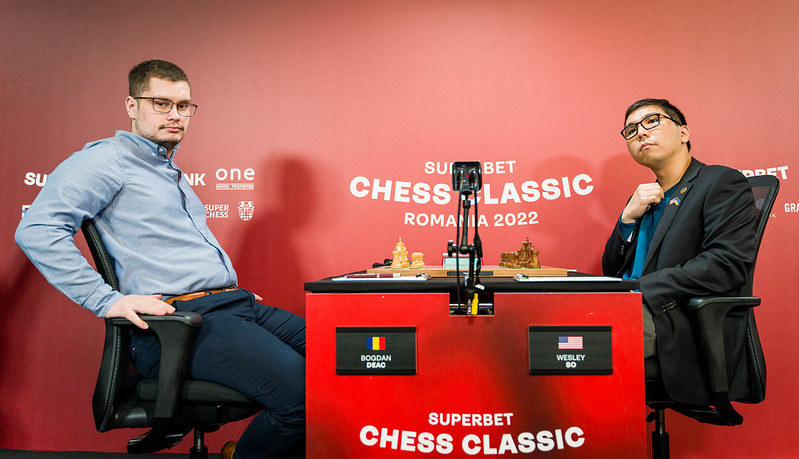 Wesley played the Queen’s Gambit Accepted (“Leinier has been playing this QGA against me non-stop, so I thought why not use it for the other colour?”) against Bogdan-Daniel Deac and had barely left his home preparation when the game fizzled out into a 25-move draw by repetition. 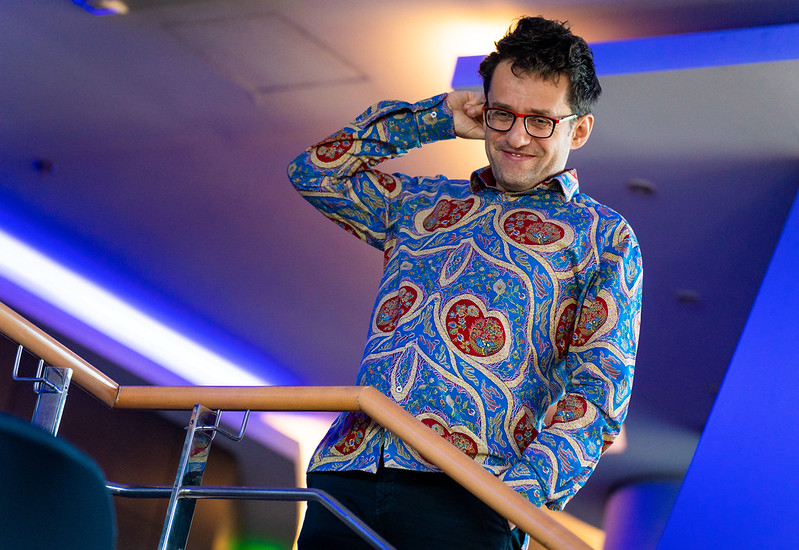 It was a similar story in Aronian-Caruana, where Levon Aronian played the Bishop’s Opening (1.e4 e5 2.Bc4) and wanted to surprise his opponent, but it didn’t quite work out!

I thought that this is playable, then I forgot that I actually played a game like this against Fabi already, in a blitz game.

It was a rapid game from the 2018 Paris Rapid and Blitz, with 8.c3 the first new move. There was essentially nothing to report for the rest of the game, which was over in 26 moves. How did Levon feel?

I just thought that I should give a little try and if things don’t work I’m in a good situation, and I’m playing White, which is the new Black! 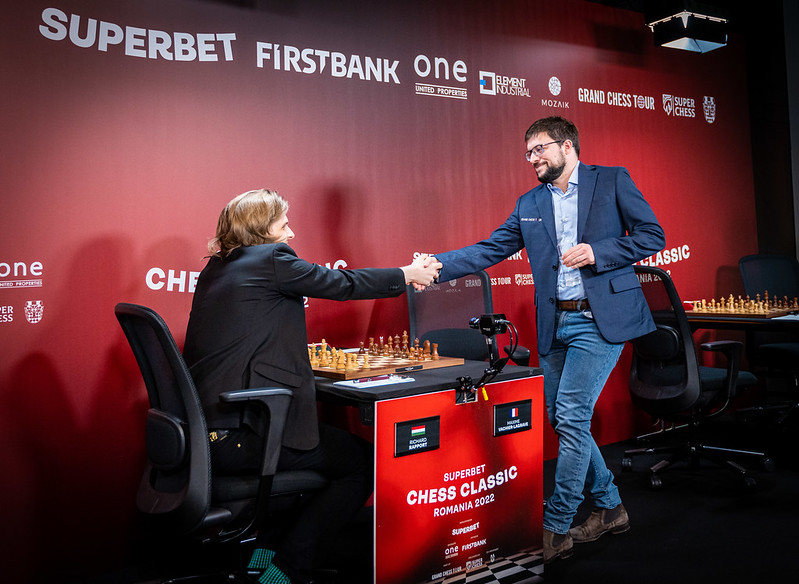 The two draws for the leaders meant an opportunity for the remaining players to close the gap, and we got to see a combination of will-to-win and exhaustion, which led to some surprising blunders. The most brutal was in Rapport-MVL, where Maxime again ventured outside his comfort zone by playing the Queen’s Gambit Accepted. Things didn’t all go according to his plan, but on move 28 the position was still roughly equal.

And here Richard thought for a little under two minutes before playing the shocking 28.Nd5??. After 28…Nxe5, a piece down, he had no choice but to resign. 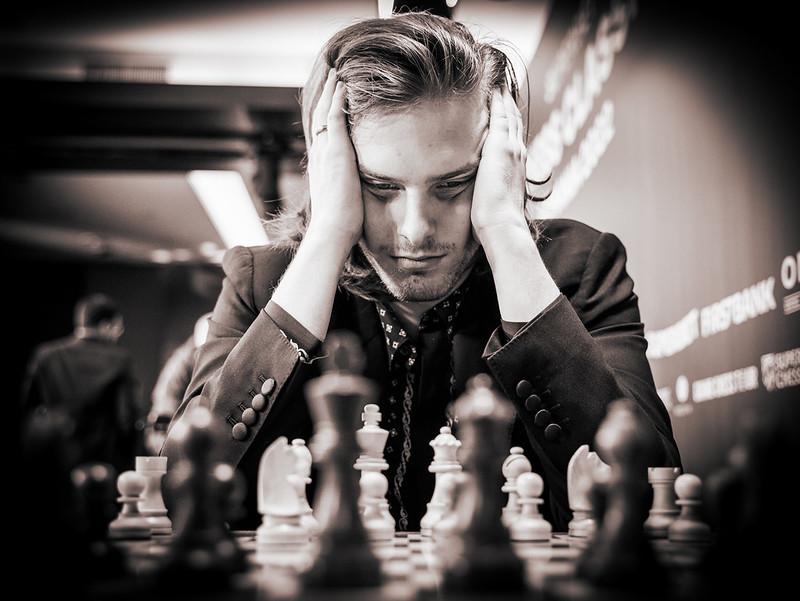 The bishop on a5, which Richard had forgotten about, can simply take the rook on d8. Shakhriyar was nearby when the blunder happened and could see Richard was devastated.

It’s very bad for super-grandmasters. My feeling, of course, is very bad when I see chess players with a move like this. I also miss sometimes like this, it’s very bad, and I see Richard hates when he misses.

Richard had also blundered in one move against Deac earlier in the tournament. For Maxime, meanwhile, there was the relief of being able to bounce straight back from the loss to Levon Aronian.

It just feels good of course to come back immediately after my non-game yesterday… I’m glad that my mess up of yesterday was corrected. Blunders happen, and it always feels good to be on the receiving end. 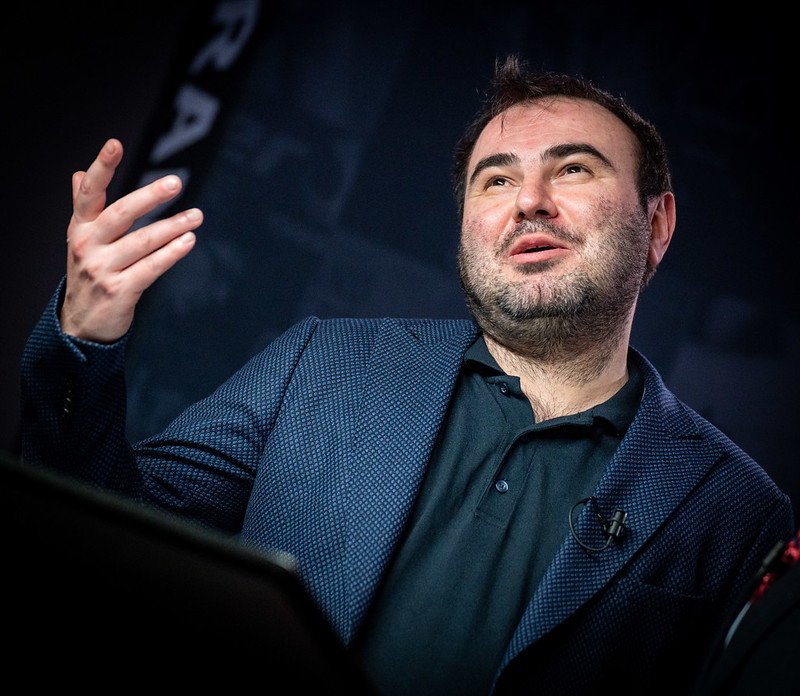 Nepomniachtchi-Mamedyarov was full of twists, with Ian Nepomniachtchi’s new try in the opening with 13.Ng3 and 15.d4?! leaving Shakhriyar Mamedyarov very puzzled.

After 15…exd4 Nepo sacrificed a pawn with 16.Bf4, though after 16…dxc3 he spent 20 minutes before deciding, correctly it seems, not to sacrifice another but play 17.bxc3.

When Shakh played 17…g5! he felt sure, with an extra pawn and the attack, that he was winning, but he was frustrated by Nepomniachtchi’s resistance, until both players overlooked a knockout blow after 35…h6?

“Oh come on!” said Mamedyarov when he was shown the winning 36.Qf2! He hadn’t missed his opponent’s chance completely, but thought that after 36…Nd7 37.Rxc5 Nxc5 there was no more than a draw with 38.Qf7 Qd2+. 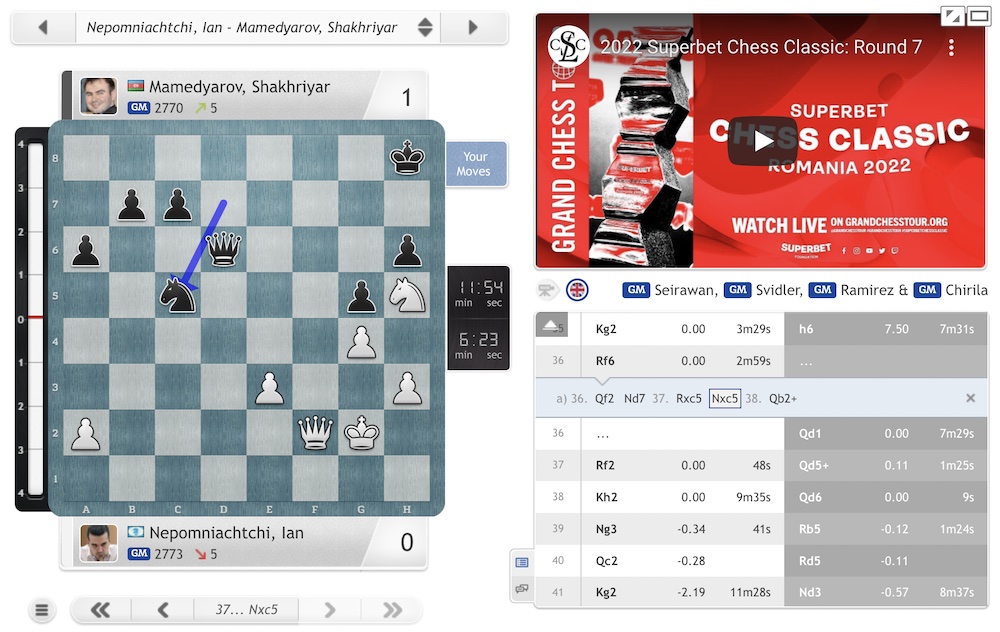 Nepo instead played 36.Rf6 and the moment had gone. Shakh commented:

It’s very good for my chess career. Now my mood will be back, because sometimes luck is very important!

It was perhaps a little lucky that Nepo lost the thread of the game completely in what should still have been an equal position. Shakh gradually took over and went on to win. 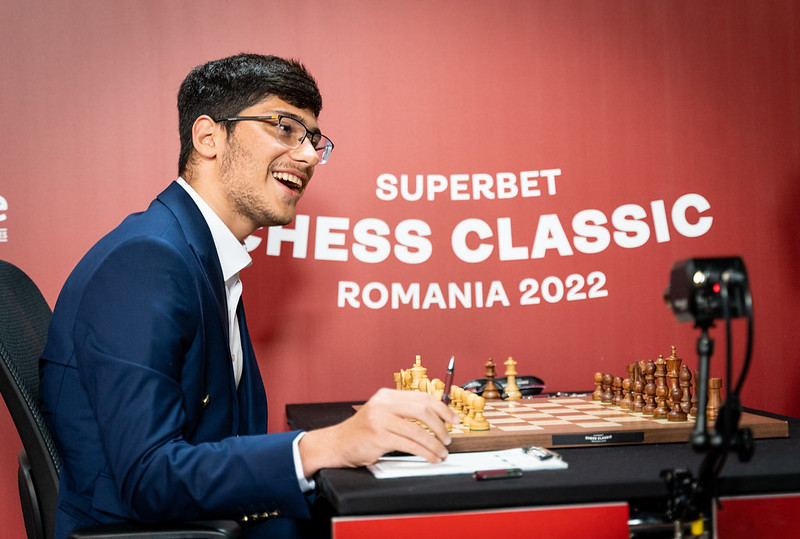 The final game of the day to finish was Firouzja-Dominguez, and it was a huge battle. Alireza described the Nimzo-Indian line he chose as, “the best way to get a game, but it’s very risky”. Leinier seized the initiative for a while, but in the end it was Alireza’s kingside attack that would bear fruit… with the help of another mistake.

Here 35…Qb8, swapping off queens, was the move suggested by Alireza, but Leinier went for 35…Nc6?, allowing 36.Rh7!!, a blow Leinier had once delivered himself.

The point is that 36…Kxh7? runs into 37.Qxf7, trapping the black king, with Rh1 and checkmate to follow. If Black does nothing then Rxg7+, Qf6+ and Rh1 will again give checkmate.

Leinier is used to playing in time trouble, however, and with one second to spare he found the only defence, 36…Re6!

Alireza called it a “fantastic idea” as Leinier followed up with 37.Qh4! Nxd4!, and after 38.Rxg7+ Kxg7 39.Qxd4+ Qxd4 40.Rxd4 Black had survived until the endgame. Alireza correctly assessed it as winning for White.

It wasn’t easy, but although Firouzja missed some clear wins, it was a position that was hard to spoil, and he wrapped things up in the end.

That left Firouzja a point behind the leaders Wesley So and Levon Aronian, but at least with the first of those leaders things are still in Alireza’s hands.

Winning is very difficult! Wesley tomorrow with Black, he’s a very solid player, but we will see. I’m trying to play very good chess, but I got many winning positions and unfortunately I couldn’t make it work, but hopefully in the last two games I can play better. Let’s see… Some confidence is going back. It was a long time I didn’t win — it’s good to win a game! 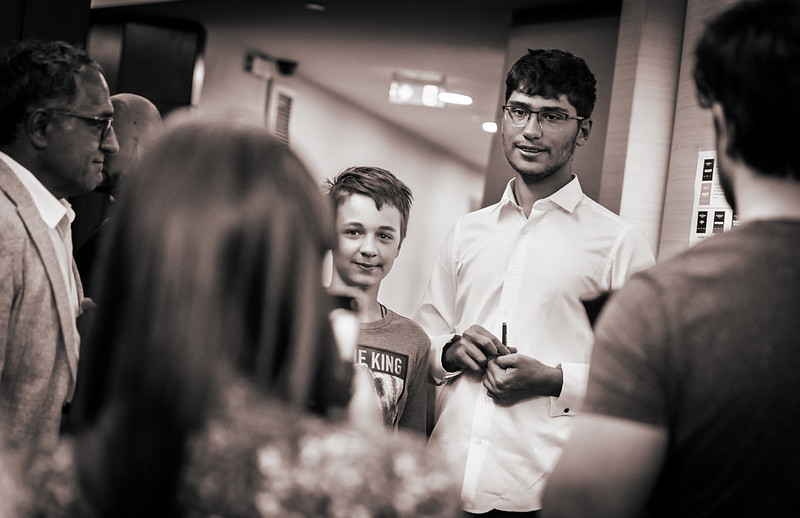 Even if it's come too late for the Superbet Chess Classic, it might just be in time for the Candidates. In any case, the standings look as follows going into Friday’s penultimate round.

The other leader has a tough match-up, as it’s Nepomniachtchi-Aronian, while MVL, just half a point behind, has on paper the appealing prospect of White against Deac. Caruana-Rapport is a crucial game for Fabiano’s chances.