Shakhriyar Mamedyarov will at least share 1st place in the Superbet Chess Classic after taking an instant draw against Anish Giri in Round 8, while a draw in the final round would guarantee him sole first place. The players who can catch him are Wesley So, Alexander Grischuk and Levon Aronian, who are all a point back after Levon picked up the only win of the penultimate round, against Bogdan-Daniel Deac. So-MVL was a theoretical battle, Grischuk-Caruana was time-trouble mayhem, while Radjabov-Lupulescu saw Teimour dragged, at least briefly, into a fight. 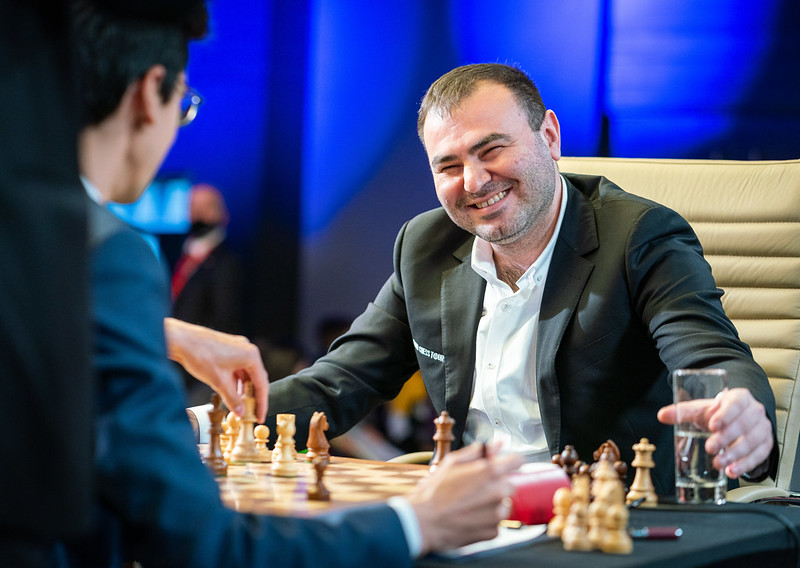 After three wins in a row, Shakhriyar Mamedyarov decided enough was enough. He went for a “spectacular” Grünfeld draw that Wesley So in particular has popularised online and that Teimour Radjabov played against Maxime Vachier-Lagrave earlier in Bucharest. On that occasion Teimour used up over 30 minutes on the clock, but in Round 8 the players weren’t messing around, with the longest think lasting 35 seconds.

Anish Giri, who would have moved within half a point of Mamedyarov with a win, had no objections, and instead was just glad to find out what his opponent wanted early on:

Giri is the king of post-game interviews!

The good news was that all the other games were more interesting, including Teimour Radjabov’s game against Constantin Lupulescu. “Today’s a big day, Teimour is going for it!” said Anish, before noting that the opening repertoire of the Romanian no. 1 makes it hard to play safe. 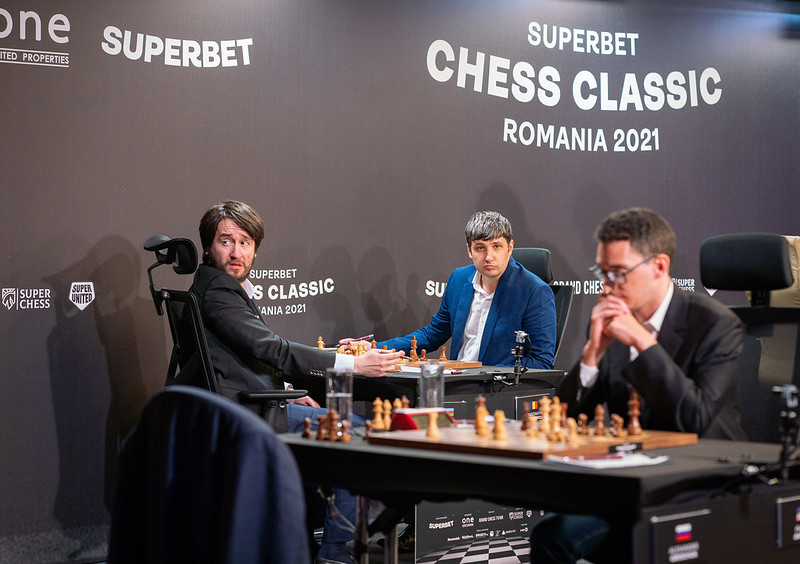 Teimour Radjabov came within seconds of losing on time in his most | photo: Lennart Ootes, official website

Soon Teimour found himself in a sharp Sicilian.

Although there doesn’t seem to be any knockout blow, the computer thinks White is doing very well here after 21.Nc4! Instead Teimour turned out to be ready to make a draw after 21.Bc4 Bc6 22.Bd5 Bb5 23.Bc4, but Constantin varied with 23…Bd7!? Pure fighting spirit? Not exactly: “Somehow I thought maybe I’m slightly better, but I couldn’t find it.”

In fact it seems Radjabov was much better, but the game soon became very drawish, with the main late drama coming when Teimour made one of his moves with just 4 seconds on the clock.

So-MVL was a glimpse of how far “theory” for the players extends beyond what’s actually been played on the board before. If the players had been working things out as they went along it would have been a thriller, but it was clear they were just testing out each other’s analysis. As Anish put it:

According to my notes, Black is holding… Wesley must be in book - Maxime has to remember his stuff. All the players have studied the position, but can they remember?

The answer was yes, except for a few details, but at least the game featured some elegant moves.

29.Bg5! Rxa1 30.Bxd8 Rxa2 eliminated a pair of rooks, with the other pair following shortly afterwards for a draw in 40 moves. 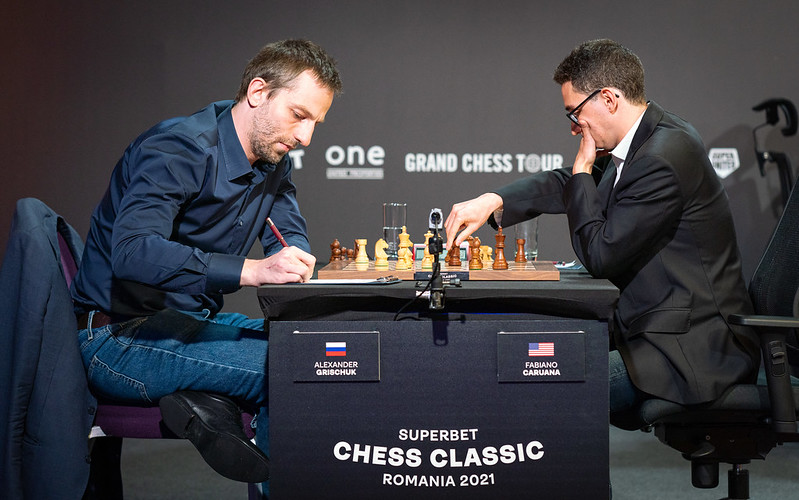 Grischuk-Caruana was more like it! “It’s important to take advantage of Sasha’s desire to think,” Levon had said the day before, and Fabiano managed to get Grischuk thinking early on with 9…Bg4!? The watching Anish Giri thought it was more about Fabi’s general approach:

[Fabi’s] provoking a fight always with the black pieces, which is very admirable, but it’s always a double-edged sword. He plays under the assumption that he’s a better player in complicated positions, and that assumption is sort of correct, but I think when you face players as strong as Grischuk and the other top players it’s not a given that he’s going to win all these complicated battles, and right now in the tournament he’s struggling on -1, surprisingly. You have to work so hard…

When you’re in bad shape you really want to go for the simple options, but he doesn’t have them! He prepares with the assumption he’s in good shape, and then when it comes to this game maybe he no longer can play the Petroff and he forgot all the variations already from the World Championship prep, so now he has to enter the mess and it’s like Russian roulette. He’s wounded, but he has to still take a shot and see what happens.

That description fitted the game, which was one of the most chaotic you’ll see at the highest level. Grischuk used oceans of time and dropped a pawn, but Fabi struggled to consolidate and burned up time himself, until Grischuk took back the pawn on move 40, with 2 seconds to spare on his clock!

Fabi got down to 8 seconds himself, however, and his 40th move was inaccurate - understandably so, since playing a move like 40…Qa7!, giving up the c6-knight to invade with the queen and give perpetual check, isn’t the kind of thing you do lightly!

Instead 40…Rc8!? 41.Rb7! (threatening Qxf6) 41…Qd8 42.Rd7 Qf8 led to an ending in which Black’s c-pawn soon fell. Fabi was once again defending a miserable ending, even if one that wasn’t as miserable as the day before against Mamedyarov.

This time there was a happy ending, after another pawn sacrifice defence.

A nice little trick to trade down into a completely drawn rook endgame. 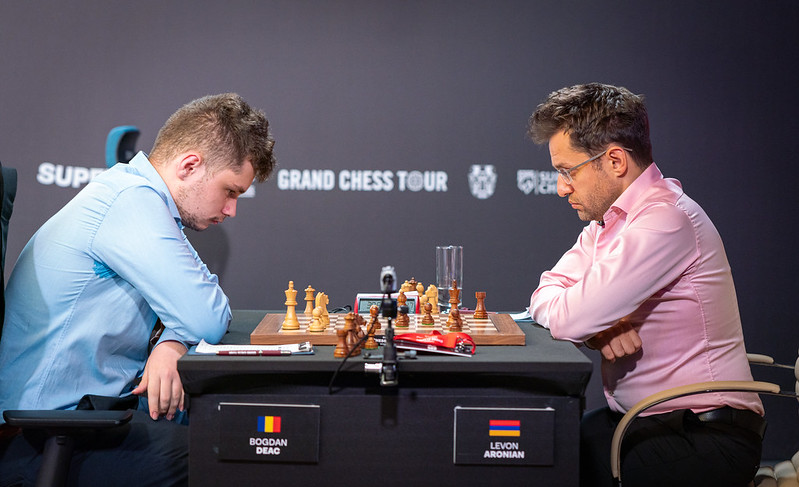 Levon’s intentions were clear early on when he offered to play the Najdorf, while he had an entertaining explanation for 18…Rd7!?

Here I thought I need to start confusing myself and my opponent, that’s why I played Rd7 with the idea of 19.Be3 Bd8. Of course it doesn’t make any sense, but at least it’s confusing! Once I played Rd7 I think that my opponent started playing very strangely.

Going for Levon’s 19.Be3 Bd8 looks to be the right idea, but after 19.Bd3!? Bogdan gradually lost his way and was in a very tricky position by the time control. Nevertheless, it was only on move 58 that the game was decided.

After 61.Nxe5 Kc2 62.Nd3 Kd1 White was completely powerless to stop the black king coming to support a new queen.

The black bishop, pawn and king control all the key squares, and the d3-knight has to move and leave the e1-gateway open.

Those results leave Mamedyarov a full point ahead of three pursuers.

A draw with Black against MVL will clinch victory for Shakh, but if he was to lose instead he could be caught by Giri (White vs. Grischuk), Aronian (White vs. Radjabov) or So (Black vs. Lupulescu). If that does happen, prize money and Grand Chess Tour points will be shared, with no playoff in this event.